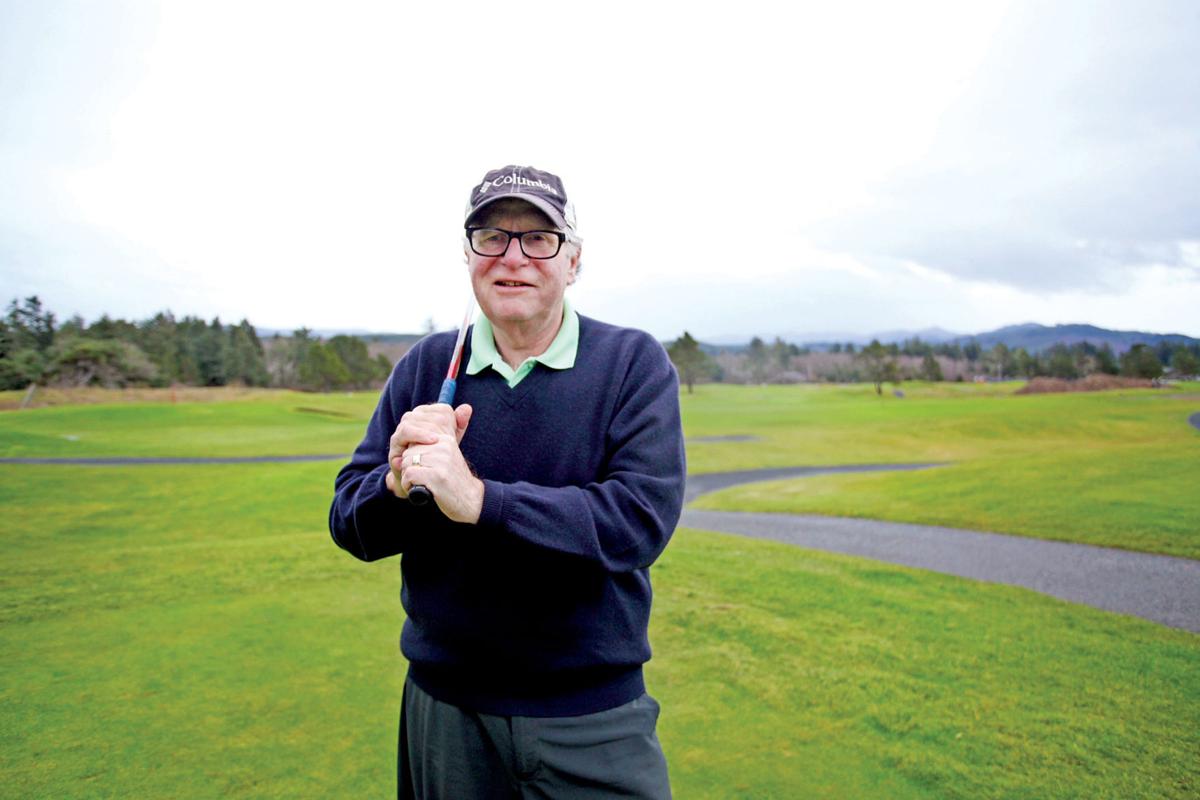 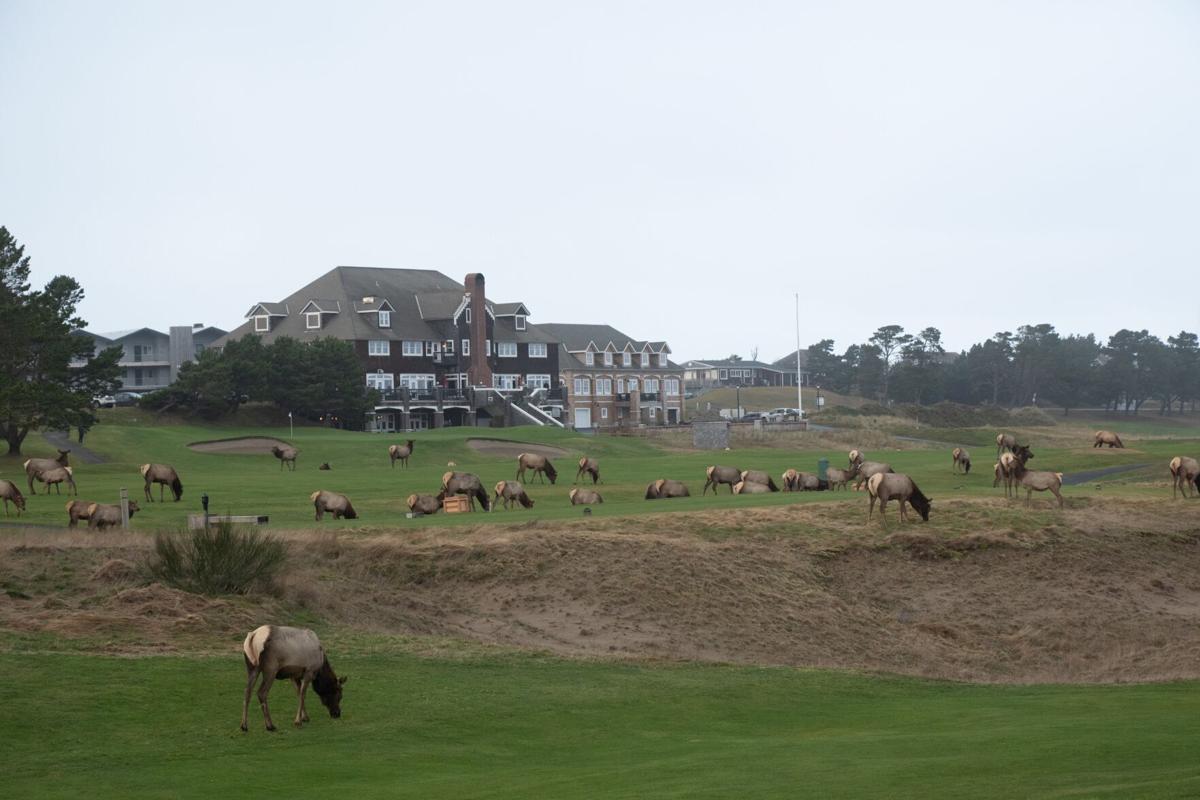 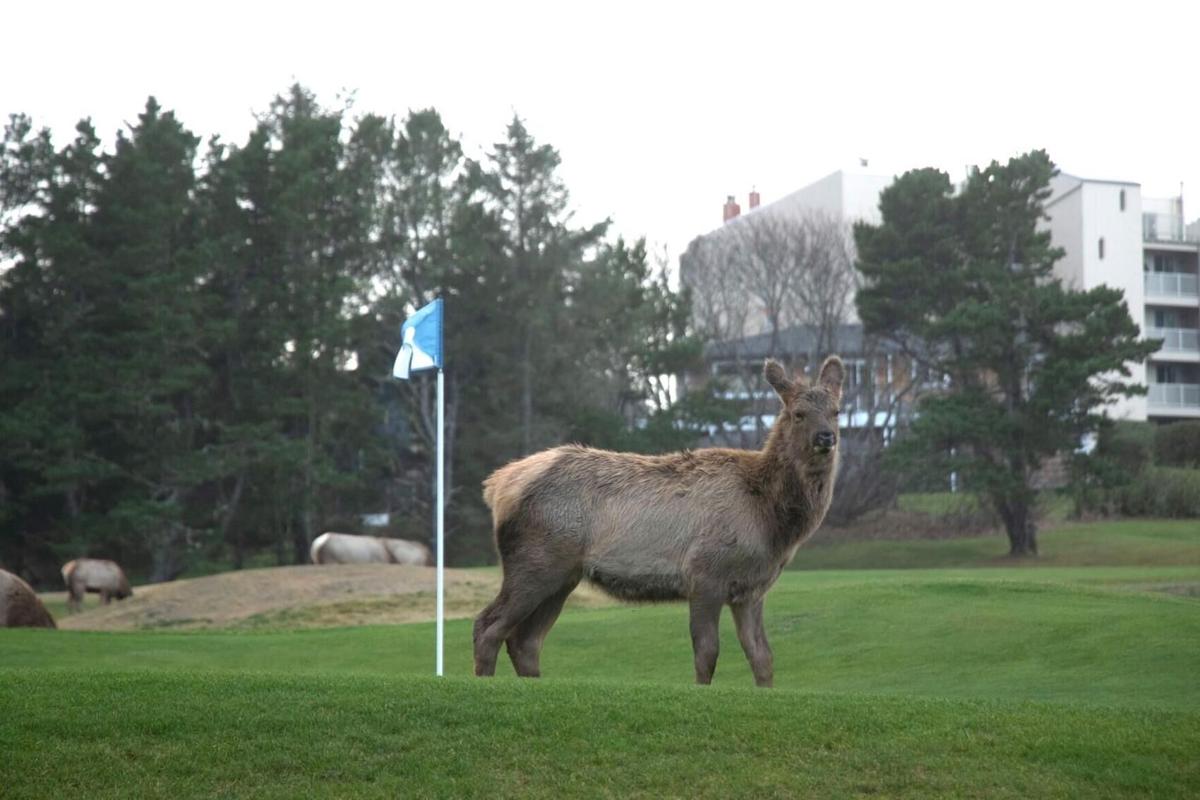 GEARHART — Tim Boyle, the owner of Gearhart Golf Links and CEO of Portland-based Columbia Sportswear, is willing to provide funding to move a growing herd of elk out of the city.

“The massive elk herd that roams Gearhart constitutes a very serious safety risk,” Boyle wrote in an email. “Humans cannot survive an elk stampede, which happen with some frequency in Gearhart. Pets have been mauled and killed by the animals, which average 1,500 pounds each, and are very aggressive during calving.”

Frustrated by a lack of action, Boyle wants to work with the Oregon Department of Fish and Wildlife and Oregon Solutions, which is helping organize the Clatsop Plains Elks Collaborative, to address the issue.

With a low mortality rate and few if any predators, the majority of calves are recruited into the adult population, creating the potential for more property damage, elk-vehicle collisions and unwanted elk-human interactions.

“Lack of ODFW funding to address this issue should not inhibit the process of relocation as I am willing to lead an effort to provide funding for this action,” Boyle said.

After Boyle purchased the 100-acre, 18-hole course in 2011 and made improvements, golfers and elk flocked to the links.

When Jason Bangild, the course general manager, arrived in 2013, there were 20 or 30 elk in the herd.

That number went to more than 100 three years ago and is closer to 150 now and will likely exceed 200 in the near future.

Boyle, Bangild and staff used measures like herding the elk off the course using golf carts. They bought coyote urine to deter them. They placed eight plastic coyotes on the course to divert the herd.

Paintball guns had no effect. Fencing was considered costly and ineffective.

Culling the herd, either through firearms or bowhunting within city limits, faced political obstacles and safety concerns.

But interactions between elk, humans and pets escalated.

A whippet was trampled and killed by a herd of elk at The Reserve in 2016. In 2017, an elk cow protecting its calf by the 10th Street entrance to the beach charged a bicyclist before the elk was tranquilized and brought to safety by emergency responders and officials from the Department of Fish and Wildlife.

An attack on a 12-year-old corgi by an elk on N. Marion Avenue early last year brought the safety issue to the fore.

“The incident is just the most recent in a long series of interactions with these large animals whose populations have exploded and who have no natural predators,” Boyle wrote in an email last year to Mayor Matt Brown. “The elk population is now at the stage where injuries to humans are inevitable.”

Trap-and-transfer relocation plans have been considered before.

If those plans should move ahead, Manuel Padilla, project manager for Oregon Solutions, said details around how much that might cost, where elk would be placed and how many would need to be moved to make a difference would need to be answered by the Department of Fish and Wildlife.

“Aside from theoretical cost, it is my understanding that the answers to those questions could only really be determined through the creation of a trap-and-relocate plan that is not currently in existence,” Padilla said. “So I don’t believe those answers are readily available at this time.”

Gearhart joined Warrenton, the Department of Fish and Wildlife, Oregon State Police and private landowners to work with Oregon Solutions to find ways to mitigate issues with the elk herd.

The project team acknowledges that people have tried many times to address the elk issue in Clatsop Plains.

Gearhart Golf Links, a project team member, is part of the process in helping to determine effective solutions for the cohabitation of elk and people in the Clatsop Plains area and making commitments to help implement those solutions, Padilla said.

“Because of the comprehensive nature of the problem, individual efforts are fruitless and smaller group efforts have run into problems and lost traction,” he said. “The Oregon Solutions process is geared towards working through issues, in a more inclusive and collaborative way, which have left past efforts without results.”

A declaration of cooperation is the culmination of the collaborative process, coming from recommendations developed by the project team for taking action.

“The declaration works to iron out any issues and create agreement on what is to be done,” Padilla said. “In this case, the declaration lays out the framework for a new wildlife management plan specifically for the Clatsop Plains area. In every case, the declaration’s purpose is to lay the groundwork, create the conditions, and generate and align resources for unified action.”

Members of the project team remain in discussion on aspects of the plan. They anticipate wrapping up the plan at the beginning of next year.

“This timeline is later than we wanted but it’s the right one given the challenges of this year and the seriousness of the Clatsop Plains elk issue,” Padilla said.

Specific financing discussions have yet to occur.

Once the declaration is signed, that is the green light to get to work, Padilla said.

Management at the golf course has waited a long time for change but appear ready to let the collaborative’s work come to a conclusion.

“I think we would all like ‘sooner than later,’ but realize these steps must be navigated first,” Bangild said.

I would suggest that Mr. Boyle contact "Wapiti Moving and Storage". They have co-opted with Tanzania's "Pachyderm Transfer" in order to humanely remove large mammals from properties in order to keep the flow of revenue unobstructed into land owners' accounts . Trouble is, where do these refugees go? To someone else's property? This is what keeps the mammal removal industry viable. It just goes on and on until they eventually wind up back where they started. After we other mammals realize that it's kinda neat to have elk and elephants amongst us.

The new adjoining residential homes are taking up the elk habitat. When humans and their pets move into wildlife habitat interactions have a higher chance of happening.

I would much rather keep the Elk and remove the Gearhart golf course owner. They were here first. It's the human expansion which is causing any friction. If he doesn't like them, he probably shouldn't have bought a golf course in the middle of a known elk habitat.