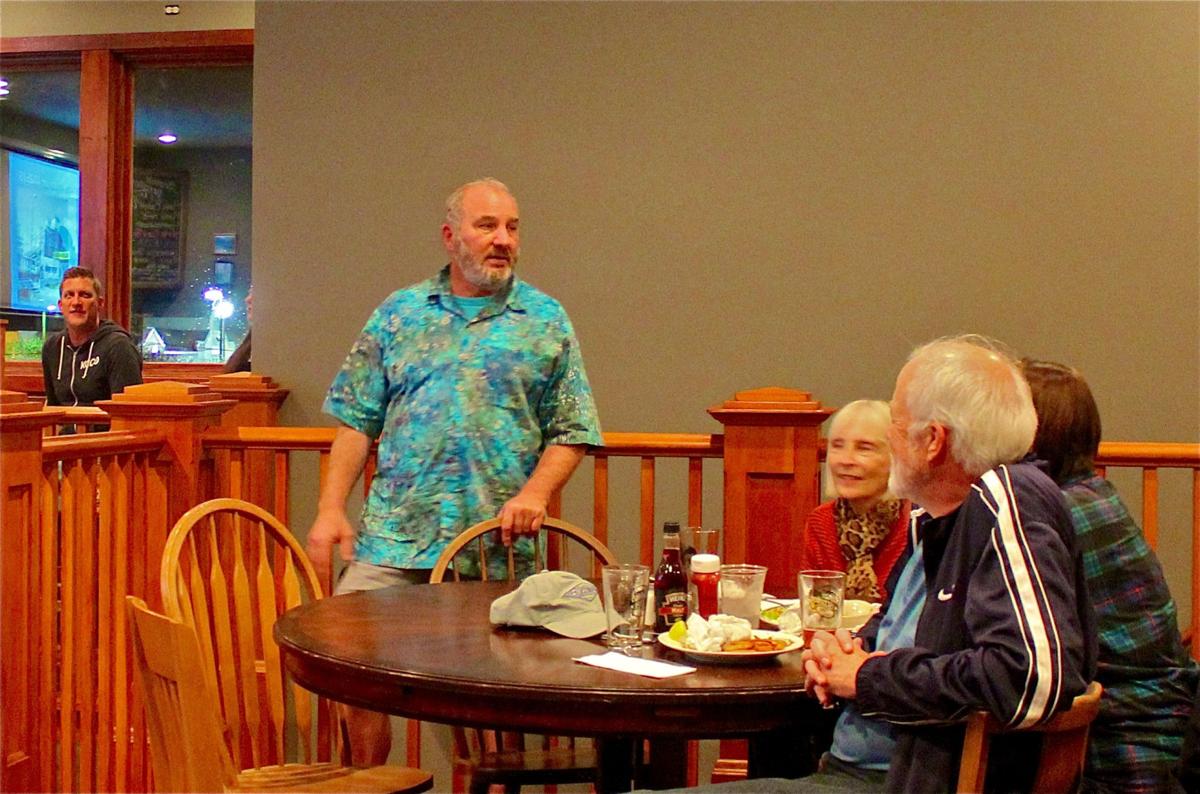 General Manager Keith Chandler gave a presentation the history of the Seaside Aquarium, which used to be a natatorium, during the first History and Hops night at Seaside Brewing Co.'s brewpub Oct. 29. The monthly program is a collaboration between the brewing company and the Seaside Museum and Historical Society.

Attendees enjoyed drinks and food while listening to a presentation on the history of Seaside Aquarium during the inaugural History and Hops night, a new monthly program started by the Seaside Museum and Historical Society in collaboration with Seaside Brewing Co.

General Manager Keith Chandler gave a presentation the history of the Seaside Aquarium, which used to be a natatorium, during the first History and Hops night at Seaside Brewing Co.'s brewpub Oct. 29. The monthly program is a collaboration between the brewing company and the Seaside Museum and Historical Society.

Attendees enjoyed drinks and food while listening to a presentation on the history of Seaside Aquarium during the inaugural History and Hops night, a new monthly program started by the Seaside Museum and Historical Society in collaboration with Seaside Brewing Co.

About 25 attendees enjoyed an evening of food, drinks and a history lesson about one of Seaside’s well-known landmarks.

The Seaside Museum and Historical Society is partnering with Seaside Brewing for the event series, which will feature a new speaker each month discussing a topic related to the history of Seaside or the Oregon North Coast, said Steve Wright, museum board president. The event always will take place at the brewpub.

“This is a public house, and this is what you do at public houses,” said Jimmy Griffin, co-owner of Seaside Brewing. “It’s supposed to be a place where people can treat it like their living room.”

A program provided by McMenamins in Portland, called History Pubs, gave Wright the idea for introducing a similar program in the Seaside area. Some people still do not know Seaside has a museum or have not visited it.

“I’m trying to change that,” Wright said. “Things like this, I think, will help.”

Seaside Brewing Co. was a natural partner because the facility is brimming with history, which the owners highlight. Wright said that might be a topic one night, and he is open to other topic ideas, as well.

The partners are working to create a schedule that fits around other events taking place in town, such as large conferences, holidays or important meetings. The initial idea is for History and Hops nights to be during the last week of each month. The event likely will run through the winter months when Seaside generally has slowed down, Wright said.

The building that now houses the aquarium opened as Seaside Baths, a natatorium, in August 1924, and it offered warm saltwater swimming. Arthur and Lillian Viggars were the original owners. It was one of two natatoriums in town; the other, the Oates Natatorium, was located by the Turnaround, Chandler said.

Because of Great Depression struggles, Seaside Baths closed in 1931, and John Oates, the owner of the Oates Natatorium, purchased the facility and leased the space.

On May 25, 1937, the Seaside Aquarium opened. However, Chandler attributes its origin to a much earlier endeavor: the Depoe Bay Aquarium, which was built in the mid-1920s as the first privately opened aquarium in the United States.

Although it had a new purpose, the aquarium exhibited remnants of its old use. A fountain that sat in the pool was replaced with a fish tank in the middle of the aquarium. The seal tanks used to be old wading pools. Only recently, a chimney from the boiler room used to heat the pool was removed.

When the aquarium first opened, it had 19 tanks and no seals. By August of the next year, the aquarium had 35 tanks and housed its first seal pup. The seals are now an integral part of the aquarium and its advertising.

The first harbor seal pup allegedly born in captivity was Tubby Jr. He was born at the Seaside Aquarium in 1952, the son of the first seal housed at the aquarium, Tubby. Sixty-two years later, on the aquarium’s 77th anniversary, the seal family’s newest addition was born. Casey is now more than a year old.

The aquarium building has served as home to other mammals throughout time. In 1938, Oates leased the upstairs to Cyril Relton, who put in the Sea Water Apartments. They were rented until 1970. The space now is used for storage by the aquarium and various other businesses and organizations.

The aquarium also has and still does house whales of various shapes and sizes. The first was a beluga whale, who arrived at the aquarium in 1967. Then, in 1988, Sea World donated a fiberglass orca replica that hung out front by the aquarium’s entryway. Lastly, a final whale — or rather the skeleton of a 36-foot gray whale — arrived in 1998. The artifact used to sit at Fort Stevens. With the permission of federal, state and local government, the aquarium purchased the whale skeleton and put it on display. It was “the start of a great collection,” Chandler said. Over time, the aquarium added skeletons from a harbor seal and a harbor porpoise, as well as skulls from three different pinniped species found along the coast.

In the early 1990s, the aquarium also added its Discovery Center, which features two touch tanks, microscopes and a staff member to answer questions. A few years later, in 1995, the aquarium started its Beach Discovery Program on the weekends in July and August. The educational program took the learning experience out to the beach.

The aquarium has been home to some interesting occurrences over the years. In the 1930s, after it transitioned from being Seaside Baths, the facility was used for an experiment to see if silver salmon would grow better in saltwater than fresh water. The result, Chandler said, is “they grew faster, but there was a higher mortality rate.”

In 1993, the abduction of a lobster named Victor brought infamy to Seaside and the aquarium. The culprit, Terry Lutz, was captured minutes after kidnapping the aquarium’s 25-pound prize crustacean and given a fine — which he only partially paid. Victor, unfortunately, was dropped on the sidewalk during the debacle and died a few days later.

The aquarium joined the Marine Mammal Stranding Network in 1990, and also works with the Wildlife Center of the North Coast. The aquarium is a drop-off center for injured animals that are then transported by staff to the rehabilitation center in Astoria.