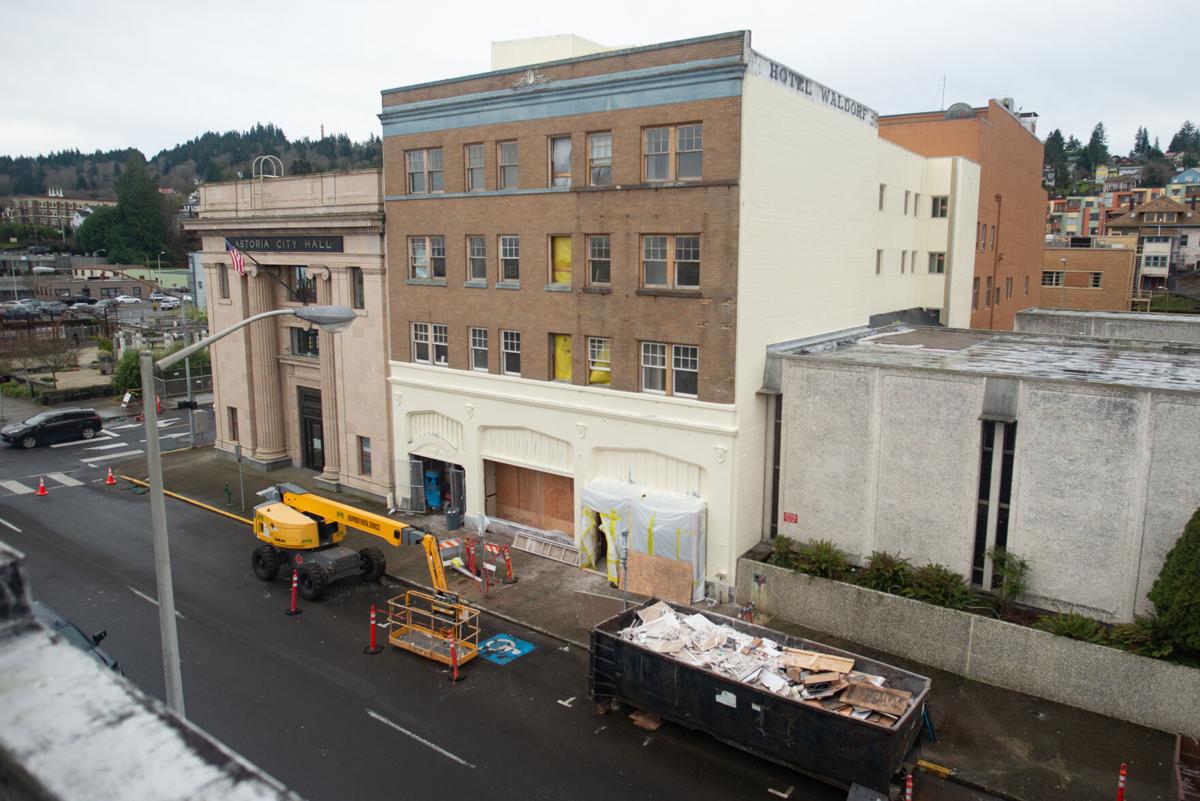 The former Waldorf Hotel will be converted to 40 affordable apartments. 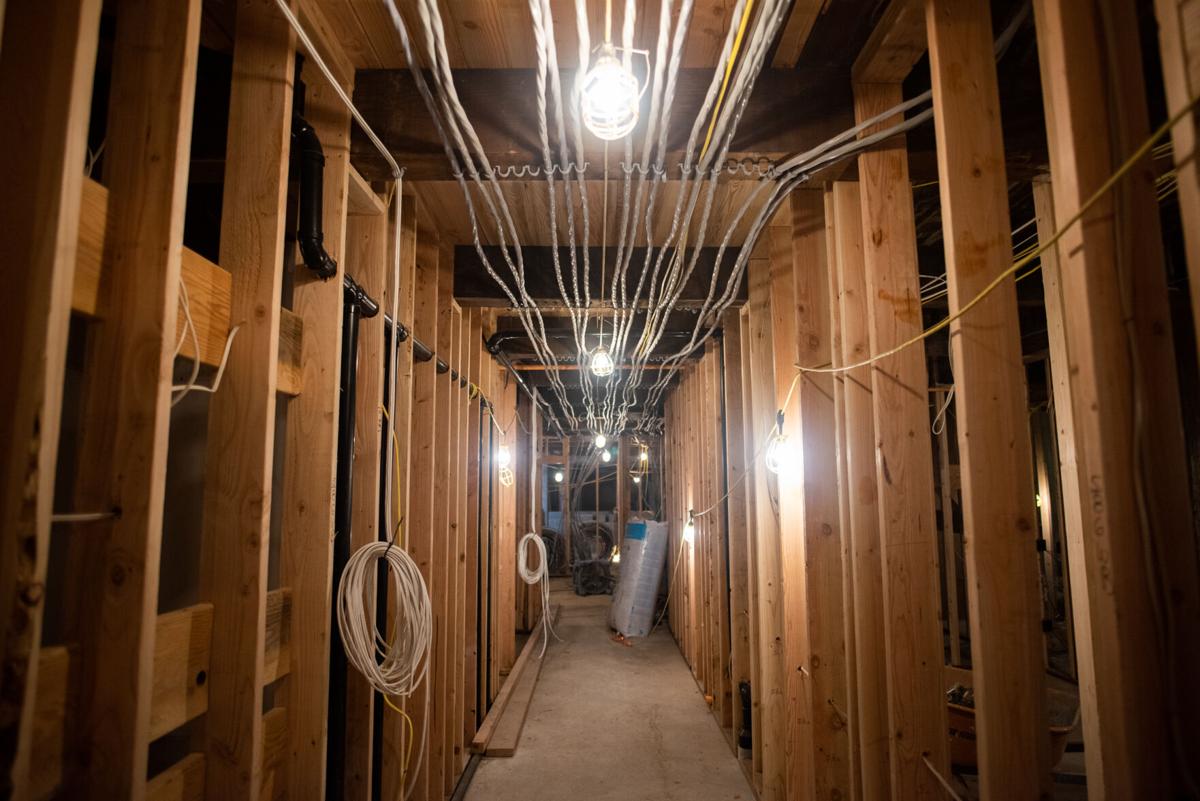 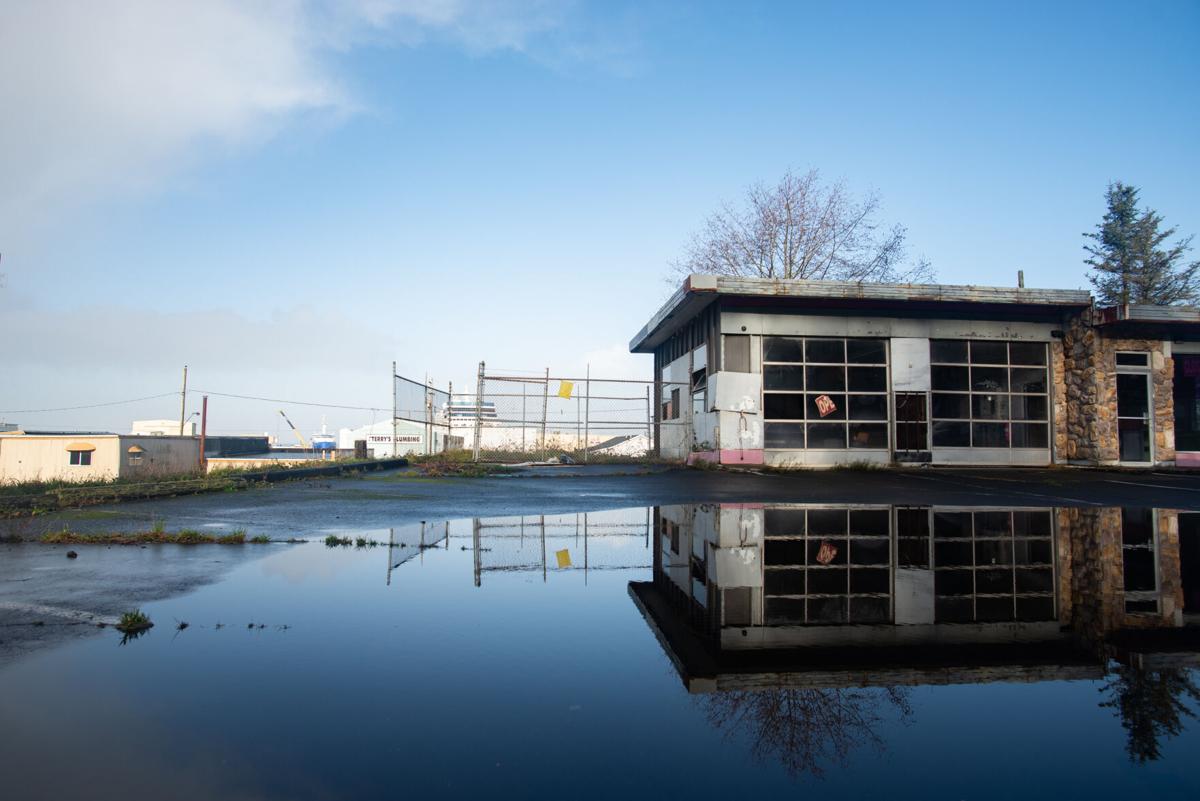 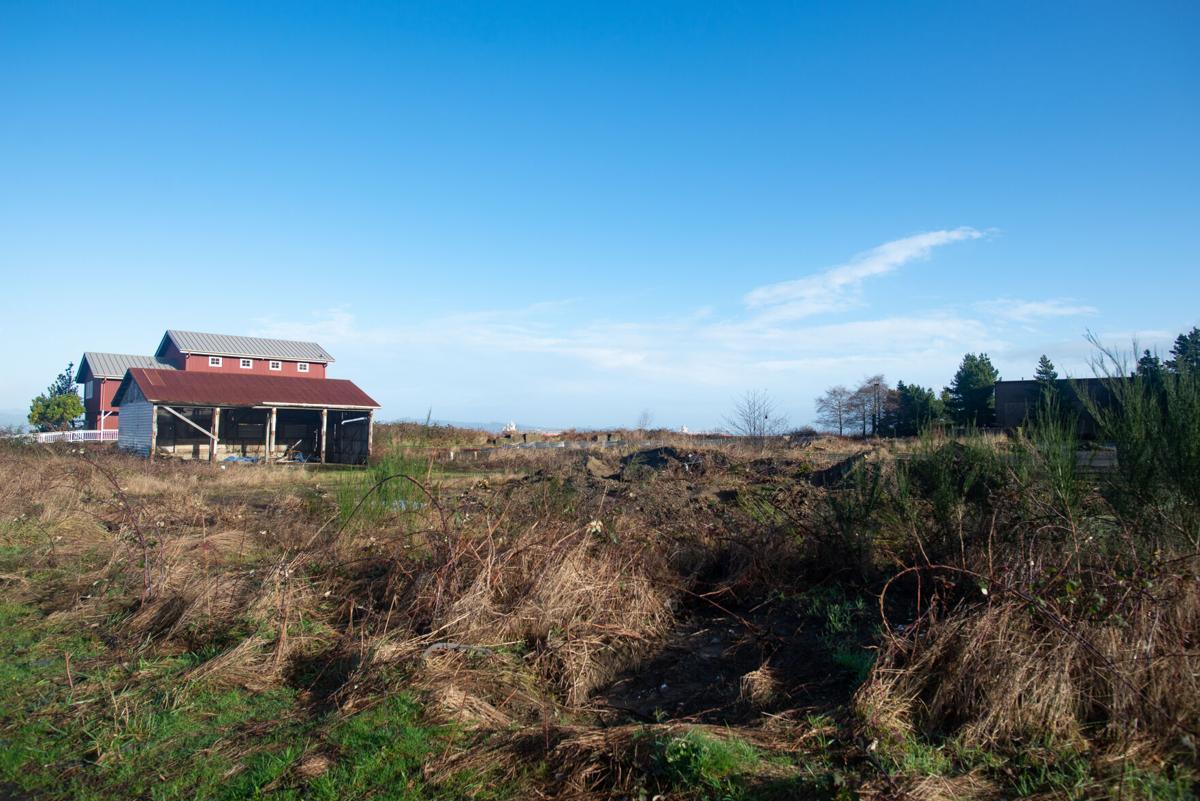 A 66-unit apartment complex is planned for the empty lot next to Safeway. 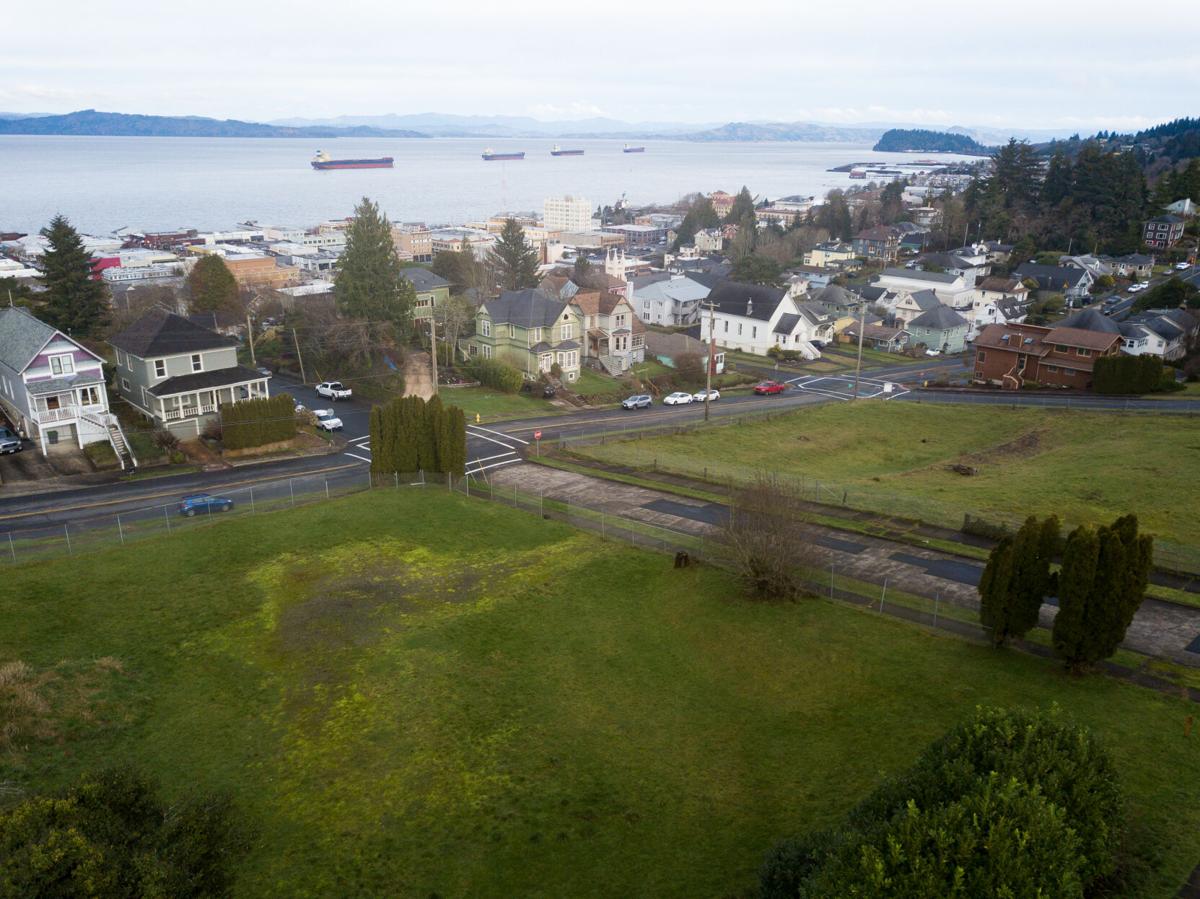 The former Central School property between Eighth and 10th streets along Irving Avenue has been vacant since the 1980s.

Astoria’s population peaked a century ago at around 14,000 people, driven by the region’s fishing and logging economy and military presence. The city’s population has since shrunk to 9,675, according to the most recent estimates from Portland State University.

Astoria City Councilor Roger Rocka touched on the city’s past while calling for a renewed focus on workforce housing.

“People who work here should be able to live here,” Rocka said at a City Council meeting in December. “... Surely we can find housing now for 10,000 people.”

Several multifamily housing projects, one nearing completion and others that could begin construction this year, promise to increase the apartment stock.

Contractors have streamed in and out of the former Waldorf Hotel, also known as the Merwyn. They’re working at a feverish pace to finish 40 affordable studio apartments that the nonprofit Innovative Housing hopes to make available by mid- to late-February.

Innovative Housing Inc. is working with Consejo Hispano and the Astoria Downtown Historic District Association to find local blue-collar workers earning 50% to 60% of the region’s median income. But demand is expected to vastly outstrip supply.

“Forty units is great,” said Julie Garver, the director of housing for the Portland nonprofit. “However, I’ve heard people describe it as a drop in the bucket, because there’s so much demand.”

A countywide housing study estimated that Astoria’s population would grow to 10,578 by 2038, by which point the city would need 345 additional housing units. Housing prices have ballooned in recent years, driven by an influx of new residents with higher incomes. The trend has only hastened as some people leave urban areas amid the coronavirus pandemic.

Several new apartment complexes still in the planning stage could start to make a significant dent in housing needs.

Developer Chester Trabucco hopes to break ground this year on more than 70 two-bedroom apartments built out of converted shipping containers stacked three to four stories high in a complex between Portway Street and Marine Drive in Uniontown. He described the apartments, each about 640 square feet and planned to rent at less than $1,000 a month, as ideal for students and seafood processing workers.

Trabucco, who pitched the idea in March, said he plans to submit a building application to the city in the coming weeks. He said he has tentative approval from the state on a plan to clean up fuel contamination at the former gas station and bulk oil plant. He hopes to install a mockup of one of the units in a state-owned parking lot along Marine Drive near Burger King in April to show off the apartments.

“I’m pretty optimistic this will be a spring, summertime project,” Trabucco said.

The city approved developer Walt Postlewait’s 66-unit NorthPost Apartments complex near Safeway in 2019. Postlewait had planned to break ground more than a year ago. Leatherman said there is still no timetable for construction, but the city is reviewing a grading and erosion control permit and has received building plans.

“They more than likely will be starting grading at this site more extensively, probably in the next couple of weeks,” Leatherman said.

Developer Cary Johnson, who proposed a 120-unit apartment complex at Tongue Point, is asking for a one-year extension on the building permits while legal access to the site is established.

The roads into Tongue Point, a former military housing center, were never designated as rights of way, leaving Johnson’s apartments legally marooned. The City Council agreed in July to survey 54th Street and Maritime Road, beginning a process of dedicating both to help Johnson’s and other nearby properties move toward development.

In 2019, the First Presbyterian Church bought a former hotel building on Marine Drive to create an affordable housing complex known as Copeland Commons. The church discussed a partnership with Innovative Housing, but later learned the project likely doesn’t fit the nonprofit’s funding model, Garver said. Leatherman said the housing project has since been put on hold.

Leatherman said the city has been approached by another group that wants to turn the former Sears on Marine Drive that closed in March into a mixed-use commercial and residential development.

City Manager Brett Estes anticipates more discussion this year about how to approach redevelopment of Heritage Square, a former Safeway downtown where the City Council has envisioned a mixed-use development of ground-floor commercial spaces with market-rate housing above.

“I’m going to be working with the City Council and developing a process to be able to go out and see what sort of interest there is,” he said.

Part of the issue for multifamily development is the lack of high-density residential zoning. Take the two vacant city blocks along Irving Avenue between Eighth and 10th streets that once housed hundreds of students attending the four-story Central School.

The property, zoned for lower-density development, has been mostly vacant except for a few houses on the periphery since the school was torn down in the 1980s. Developers have attempted everything from townhouses to apartments. But neighbors have opposed each project and any attempt at rezoning the property to higher density, which developers argue is necessary to make a project pencil out financially.

Peter Tadei, a real estate agent for the property, said affordable housing developers have looked at and passed on development because the property can only hold up to 26 units without a rezone. Garver said she looked at the property as a future project for Innovative Housing, but the group needs a location able to house 40 to 60 units.

“The neighborhood has been reluctant to want to see any kind of increased density,” Tadei said. “And again, understandable. But is that the highest and best use of that property? No.”

At the joint meeting, Estes anticipates a rehashing of potential code amendments to increase density that that City Council pulled back from several years ago, but that the countywide housing study recommended.

“It’s going to be a good dialogue, because it always comes down to these discussions about — especially when you’re looking at infill (housing) — discussions of impacts to neighborhoods, and those trade-offs. So I think that’s going to be a really good conversation, and something I know that the Planning Commission seemed to be looking forward to be having a better understanding of what the City Council’s focus could be.”