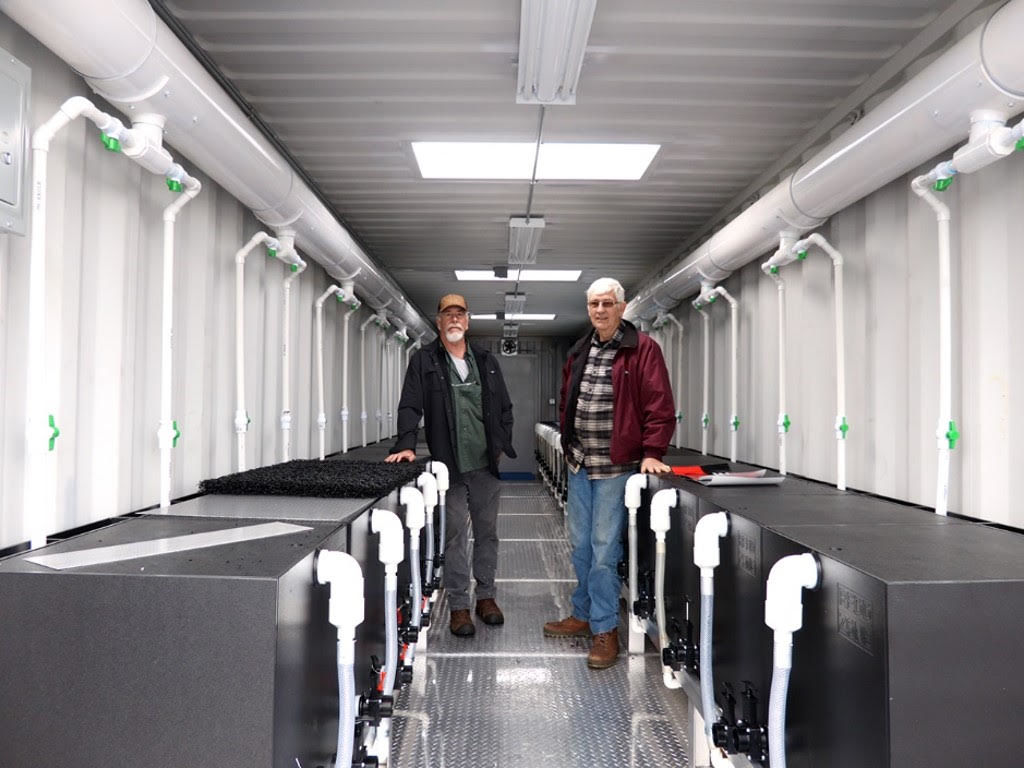 Roger Warren, left, and Tod Jones pose for a photo inside their Redd Zone hatchery. 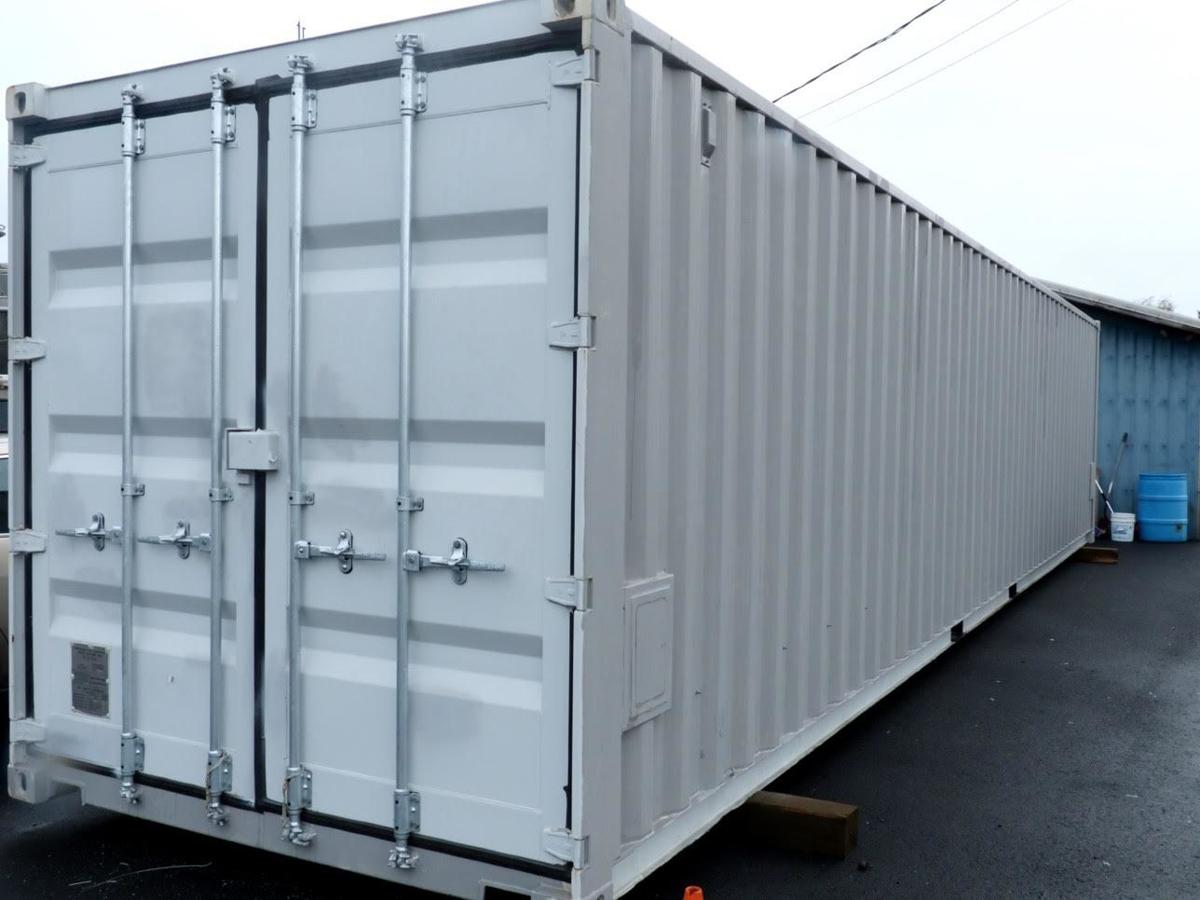 The hatchery was built inside a shipping container. 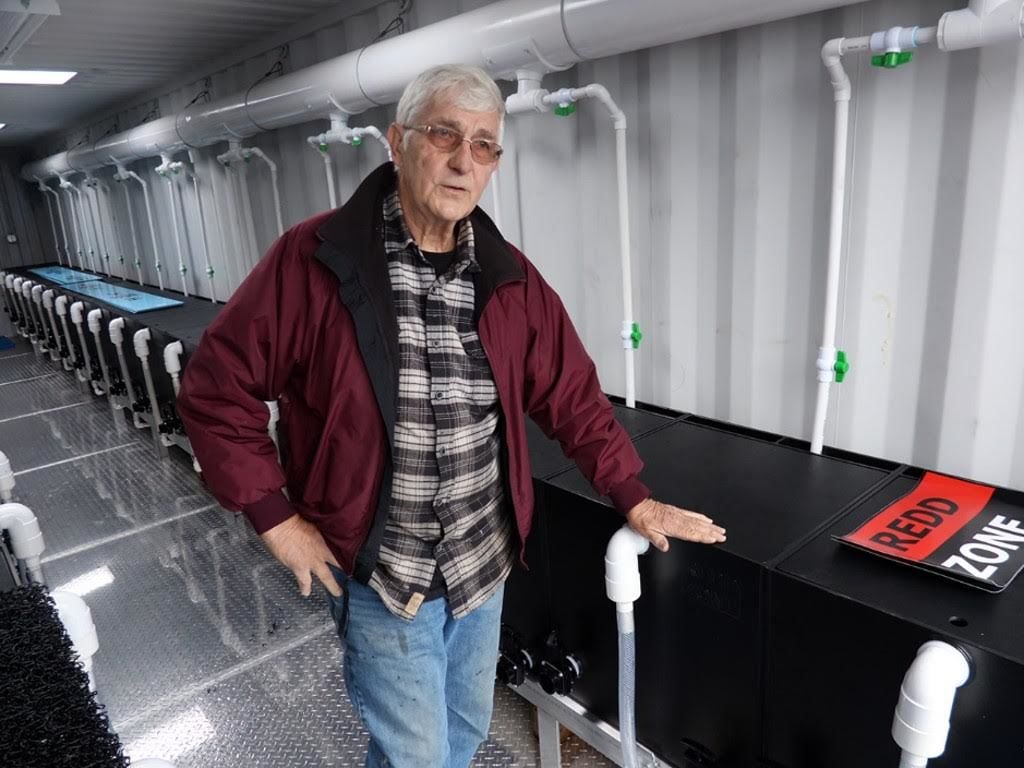 Tod Jones explains how the water system works in the instant hatchery.

From the outside, the shipping container might not look like anything special. But inside, more than 5 million chum salmon eggs will incubate and hatch next year.

This is the vision of Tod Jones and Roger Warren, owners of Redd Zone LLC and creators of the first instant hatchery of this kind. They handed over the keys to the portable hatchery to representatives of the Skokomish Indian Tribe of Washington state in late October.

Jones said he and Warren designed the hatchery to grow healthy, high-quality fish without handling them. A controlled amount of water can flow in and out of the incubators, and when the fish are ready to leave they can swim or be flushed out of the shipping container safely, without the human touch.

“It takes so much labor out of it and you don’t have to handle the fish,” Jones said. “That’s one of the big problems at most hatcheries, the owners handle their fry and those stressors build up over time to the point where you get hatchery fish that don’t perform well.”

In addition to the water system, the container has three skylights, several overhead lights and electrical power. They hired Western Fabrication in Astoria to install the watertight diamond plate flooring, as well as the 12-foot-long racks that hold six incubators each.

Jones said this system will produce “the best fry.”

“The fry that emerge out of these are heavier, they’re just like wild fry,” he said. “The ones that are in more standard hatcheries use up a lot of their yolk sac in their development, while swimming around and trying to get away from the light.”

In the instant hatchery, the eggs will be kept in covered boxes so they won’t be bothered by the light. The dark conditions are meant to imitate what it’s like for eggs huddled under gravel at the bottom of a stream.

Once they hatch, the fry are filtered through a polyethylene material, which Jones said looks like Top Ramen, in order to sort out the healthy fry from the egg shells and any deformed fry. They’ll be kept in darkness while they develop so they can stay still and absorb all of the nutrients in their yolk sacs.

“When we retired we had all this information about how hatcheries need to operate more effectively and efficiently,” Warren said.

So they got to work building this new type of hatchery system and named it for the nest a fish builds in a stream, called a “redd.”

“It’s been fun for us to realize our dreams,” Warren said.

This absolutely incredible! I am extremely inspired by these two gentlemen and would love to learn more about the "redd!" I currently work at a hatchery and am very passionate about fish culture. Way to go guys, looks promising and I love it!