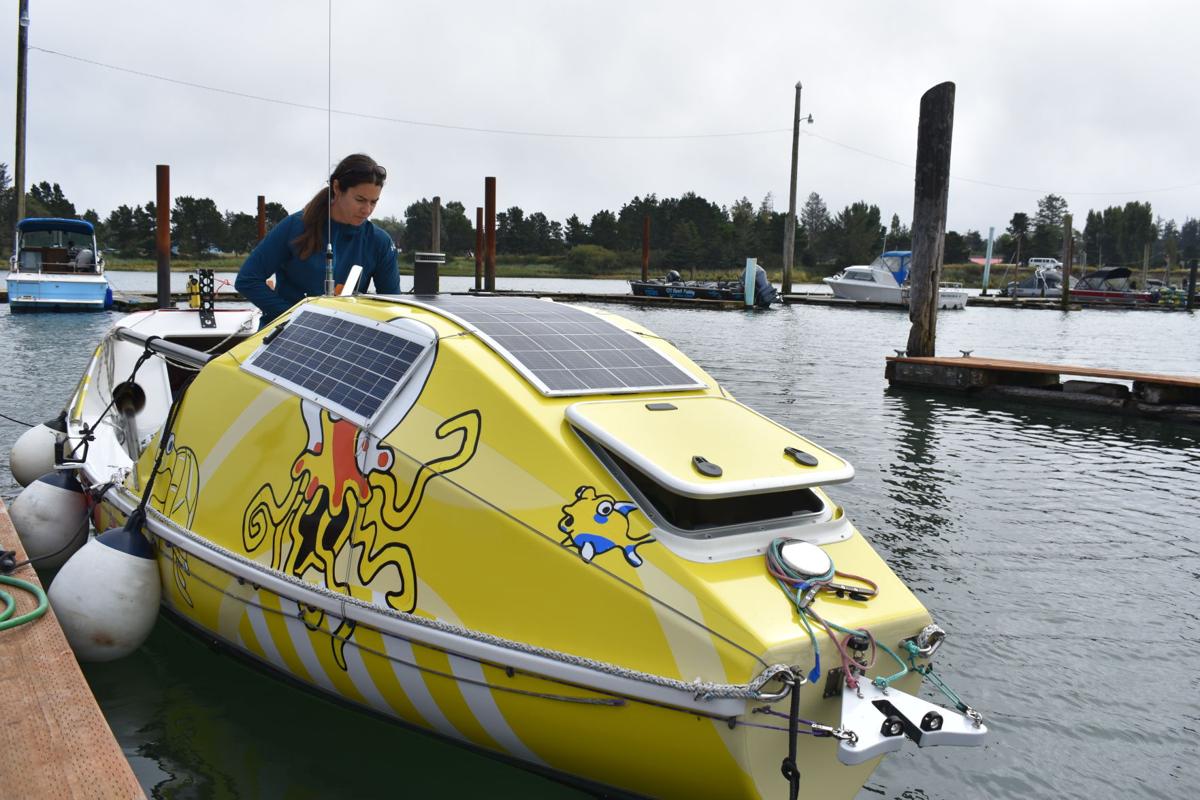 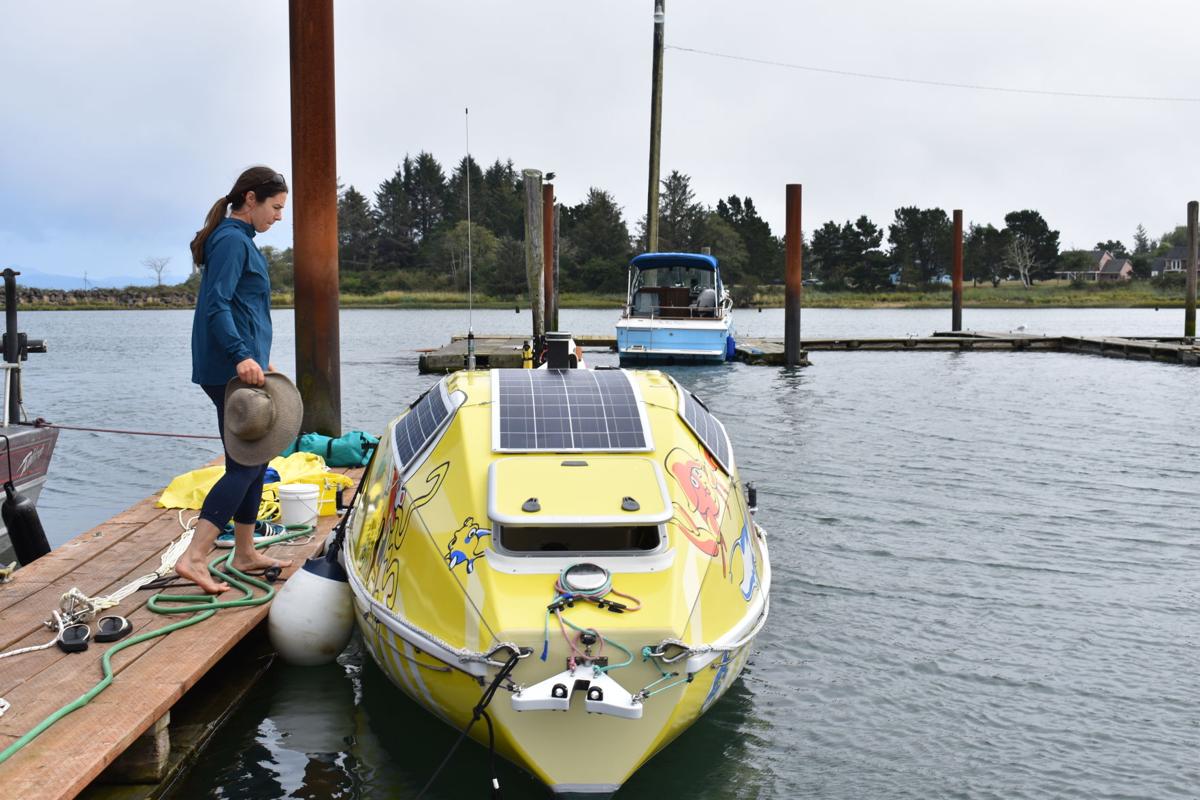 Lia Ditton plans to row her boat from Warrenton to San Francisco as part of her training.

Last week, a small yellow boat flanked with colorful doodles of cartoon sea animals silently moved down the Columbia River. On board was one passenger, Lia Ditton, who navigated and rowed the five-day trip from Portland to the Hammond Marina in Warrenton.

Next spring, that little boat and navigator will attempt to do something even more impressive: row across the Pacific Ocean. Alone.

“I’m on a mission to be the first woman to row the North Pacific,” Ditton said. “Possibly the first person to row land to land.”

But first, she has to master the Oregon Coast.

“I’d never felt so connected to the ocean,” she said. “I’ve spent a lot of time on it. It’s my life, it’s my career, but for the first time I felt really part of it.

“The oars are like these extensions of your arms. You feel the ocean. You suddenly learn that water has different textures, different conditions.”

And so she set her sights on solo-rowing across the largest and deepest ocean in the world.

“Every year, somebody goes out there and fails,” she said of the North Pacific crossing. “As a navigator, I started to be really curious about why that might be.”

What Ditton found is that the last 50-mile segment before boats reach the West Coast is the hardest of the entire trip. The only two people, both Frenchmen, who previously rowed across the North Pacific required help from a tow on that final leg.

Ditton’s goal is to cross the ocean — 5,500 nautical miles from Japan to San Francisco — without any assistance.

“It’s probably the most challenging ocean crossing you can do, even in a sailboat,” she said. “That’s why a lot of people have not succeeded.”

The challenge is what brought Ditton to the North Coast, where she can train on a section of the sea that most challenged her predecessors.

“I’m learning the Oregon Coast by rowing it,” she said.

On Monday, Ditton set out just after sunrise and headed south toward San Francisco. The two-week trip will be her last long training row before her expedition next spring. Though she is hopeful she’ll make it to the Bay Area, she welcomes the idea she may fail.

“My minimum goal is two weeks at sea, and if I get to Coos Bay, then that’s a success. If I get to San Francisco, then I’m on top of the world,” Ditton said. “Training is mostly effective when you learn something. If training was a string of successes, what would you learn?”

That training has engulfed her life for the past few years. She said she sleeps on the boat nearly every night, even when she is docked. She takes only freezing cold showers to prepare her body for the chill of the ocean. She set a goal of gaining 50 pounds before she leaves, and after gaining 35, her hands and feet and muscles bulge where they never have before.

“It’s a strange metamorphosis, gaining weight intentionally,” she said. “I want this weight, it will protect me and help save my life.”

Preparing her body to physically withstand the trip is the key to success. When she’s at sea, Ditton rows for 12 hours a day in four, three-hour blocks.

“I row at sort of a hiking pace, so it is sustainable,” she said. “The thing that’s difficult to sustain is how many calories you burn.”

Ocean rowers are at a calorie deficit from their first day at sea, according to Ditton, who hopes to consume at least 6,000 calories a day.

“We jokingly call ocean rowing an eating competition,” she said. “Because if you can win the eating, you can stay on top of the curve.”

For Ditton, that means eating six meals a day, augmenting freeze-dried food with flavored oils, and relying on cheese and chocolate to keep her going. She stocked her rowboat with 20 pounds of Parmesan cheese before heading out of Warrenton.

Ditton will finance her row across the Pacific partially by crowdfunding and partially by slicing apart her boat upon her arrival on the West Coast and auctioning off segments as artwork. The creative solution is another way Ditton merged her love for fine art and the sea.

She plans to spread her passion by partnering with schools in the United States, United Kingdom and Japan. A curriculum has been designed for elementary students that will coincide with her voyage.

“My main goal now is to bring the ocean alive for small children so they want to protect it,” she said. She hopes the doodles on the side of the boat will help instill a respect for the ocean in the younger generation. Those interested can follow along the journey on her blog, rowliarow.com.

“It’s a great story,” said Brian Kelly, a local National Oceanic and Atmospheric Administration employee who befriended Ditton when she arrived in Warrenton and helped her prepare for her next training session.

Ditton hopes her training in Oregon will help her make history next year.