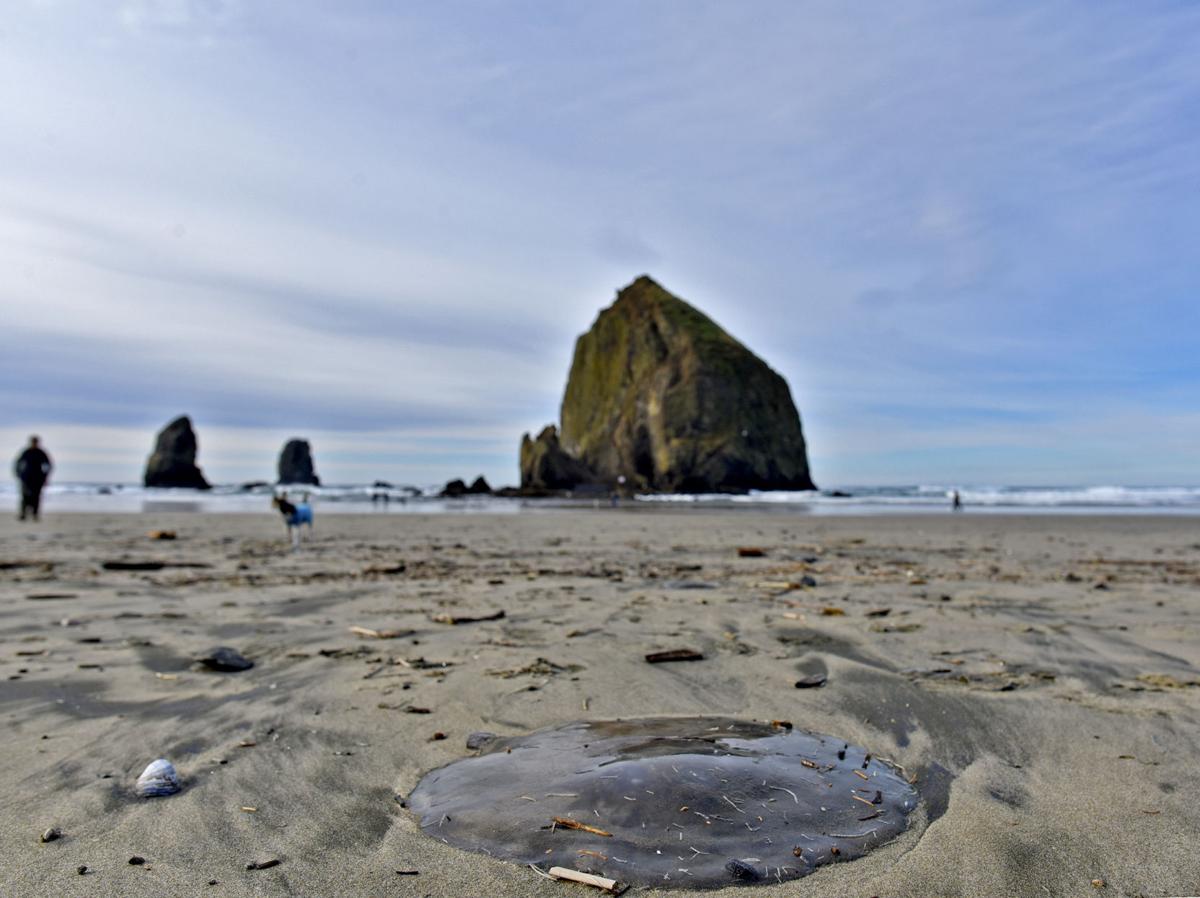 Large numbers of jellyfish recently washed up on the beach near Haystack Rock. 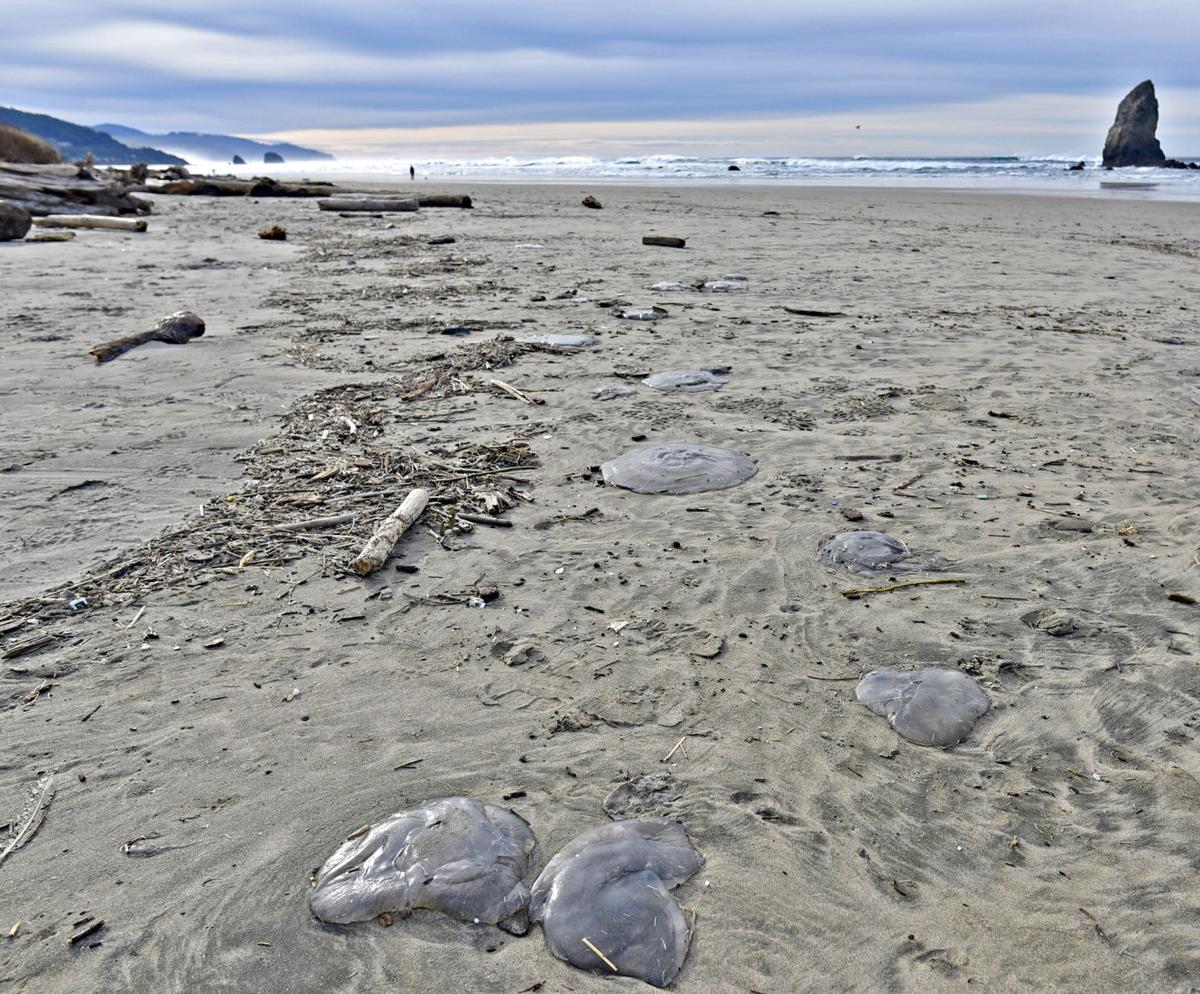 Jellyfish on the sand near Haystack Rock in Cannon Beach. 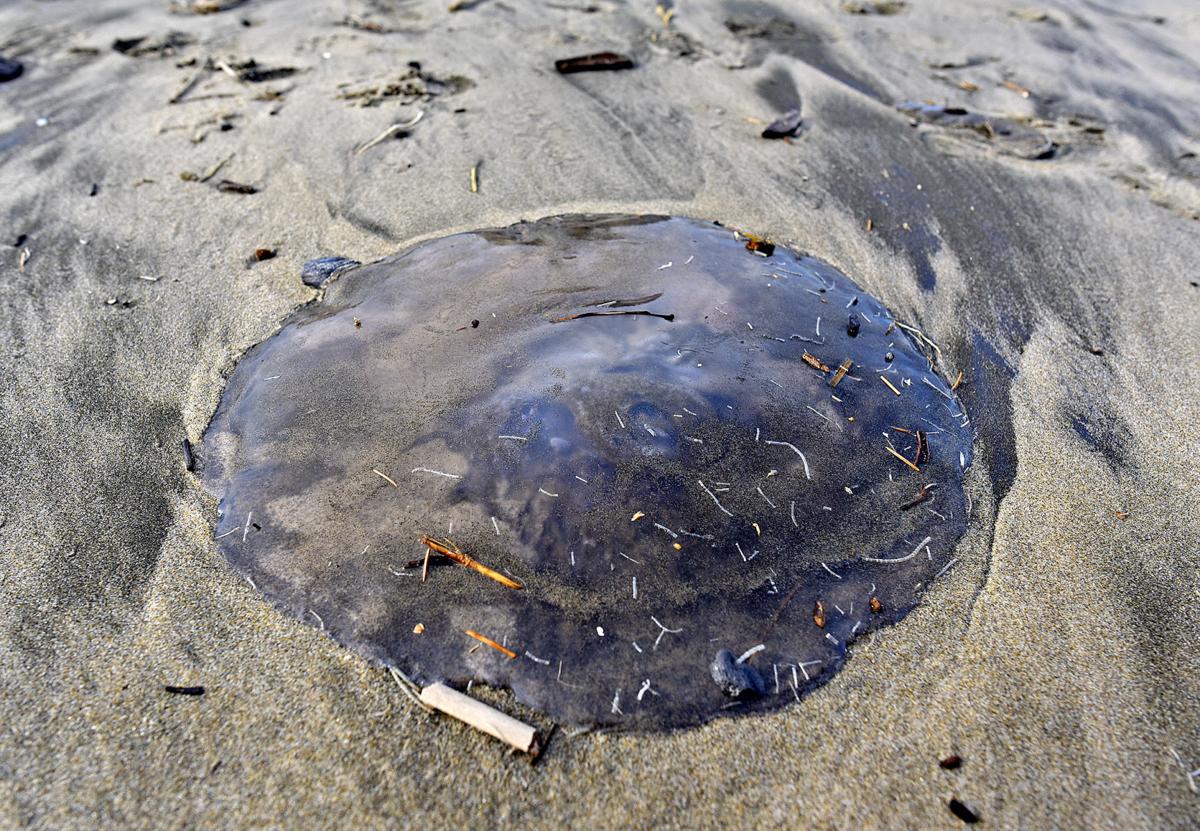 An incomplete list of things that have washed up on North Coast beaches: a giant octopus, dead whales, pyrosomes, Japanese fishing boats, hundreds of Humboldt squid, so much bull kelp, so much plastic.

And now, earlier this week, moon jellyfish as far as the eye could see around Haystack Rock.

Large numbers of stranded jellyfish are not an unusual sight on local beaches, especially after storms or during times of strong waves and seasonal upwelling, the Haystack Rock Awareness Program noted on Facebook.

Moon jellyfish are just one type of jellyfish that shows up frequently. Pacific sea nettles, which do sting, are a common find. These jellies are yellow-brown with a sort of frilled edge when nestled in the sand. Tiny comb jellies will dot the beach, looking like oversized water droplets frozen in place.

Most years, rafts of Vellela vellela — or by-the-wind sailors that float on the water’s surface and are propelled across the ocean thanks to a triangular sail — blow onto the beach and carpet the sand. They bleach white in the sun, send up a briny stink and are munched upon by foolhardy dogs.

In recent years, the North Coast has hosted unexpected creatures like pyrosomes. The little-studied rubbery, tube-shaped, semitranslucent colonies showed up en masse on beaches across Oregon, and especially around Cannon Beach and Ecola State Park, in 2017. More common in warmer waters, pyrosomes confounded researchers and clogged up commercial fishing gear.

Oregon researchers continue to study the role of jellyfish in marine food webs and their potential impact on coastal fishing.

Jellyfish may drift gracefully and dreamily when in water, but on land they are gelatinous blobs sometimes spiked with intricate colors. They are always a fascinating find for beachgoers and tempting to poke or even pick up.

The Haystack Rock Awareness Program noted that moon jellyfish do not sting most people, but jellies like the Pacific sea nettle do wash up and can still sting even after the animal is dead.

“So that’s why we recommend not handling jellies unless you’re 1,000% sure what it is,” the organization wrote.