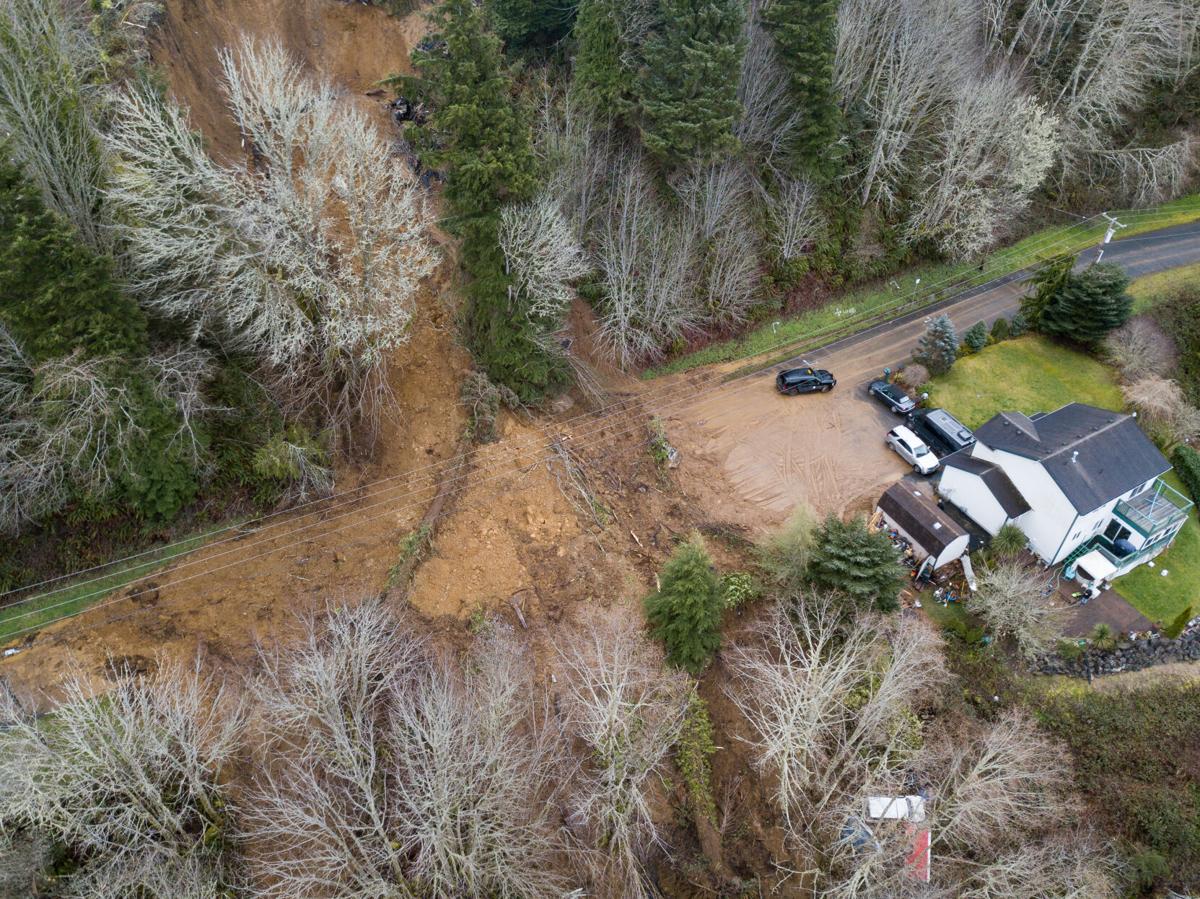 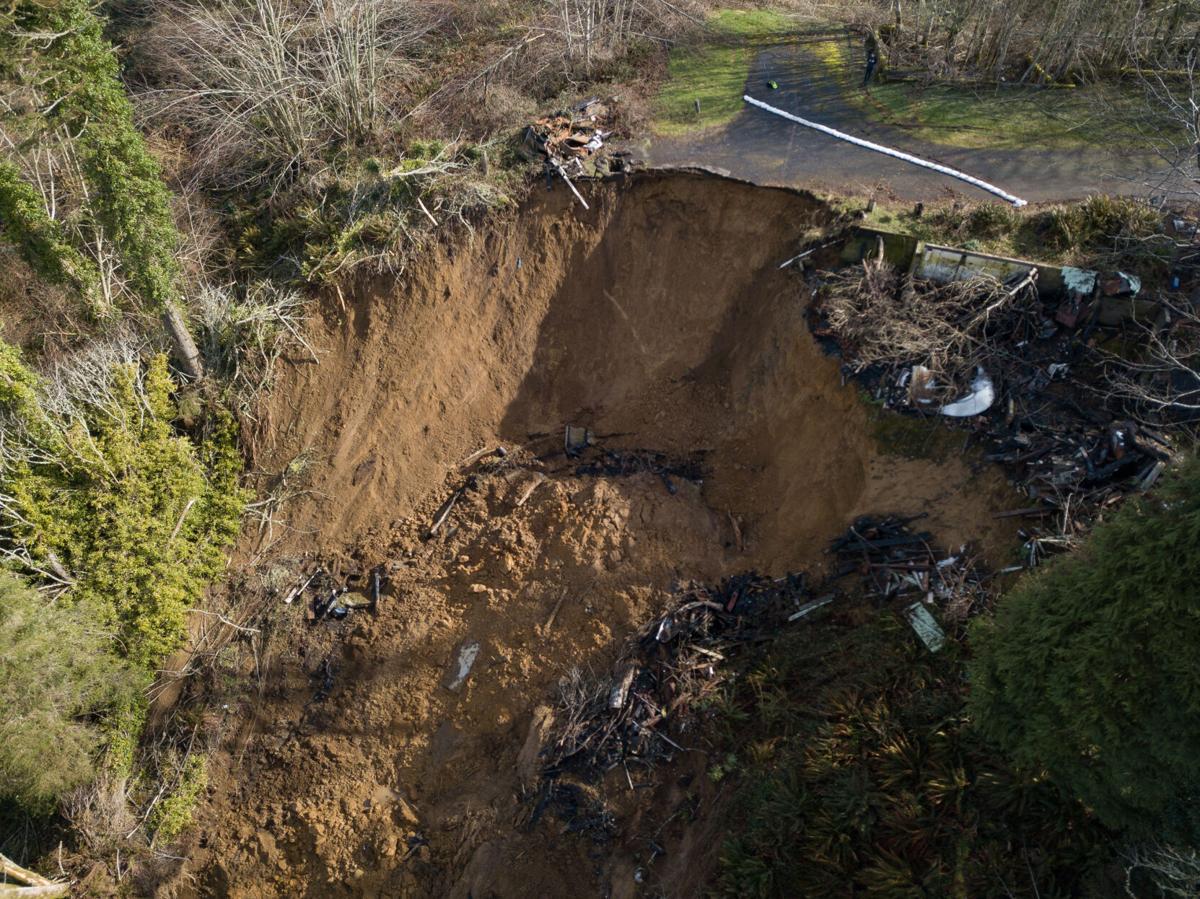 The landslide started at the end of Blue Ridge Drive, where a house burned down in December 2019. 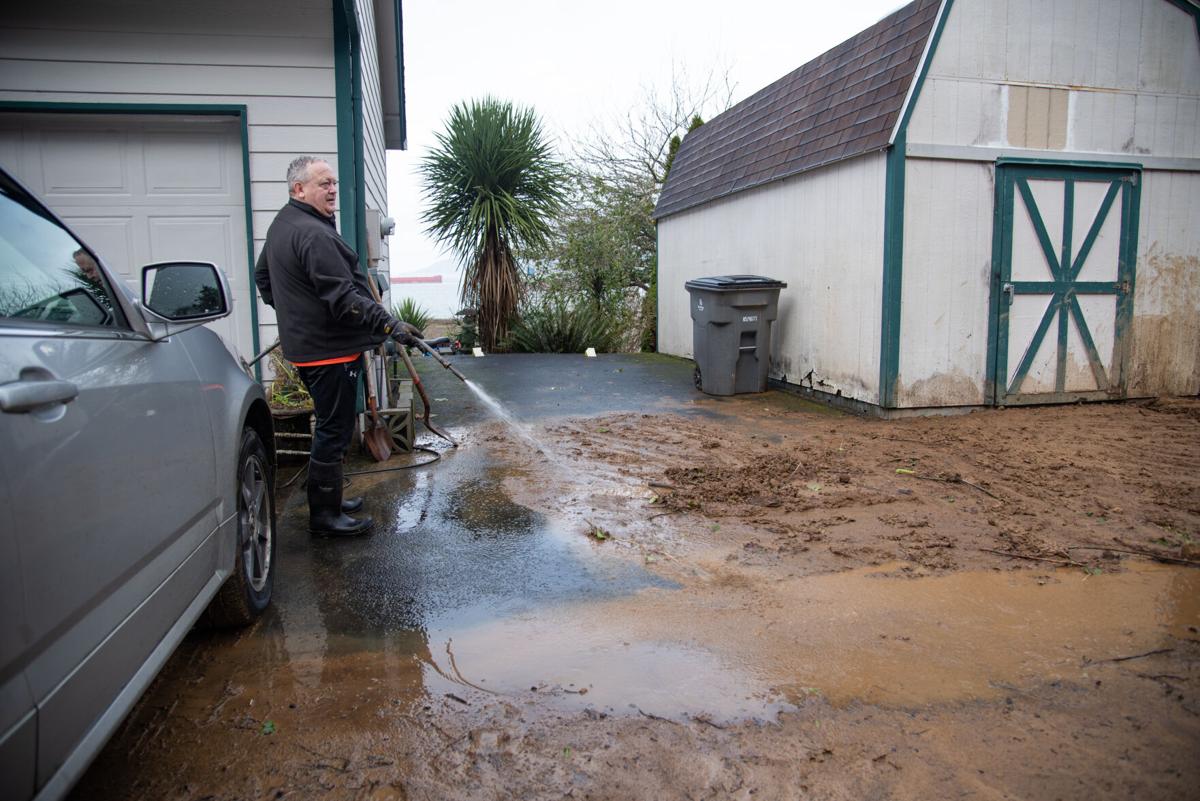 Ken Matson attempts to spray some of the mud from the landslide off his driveway. 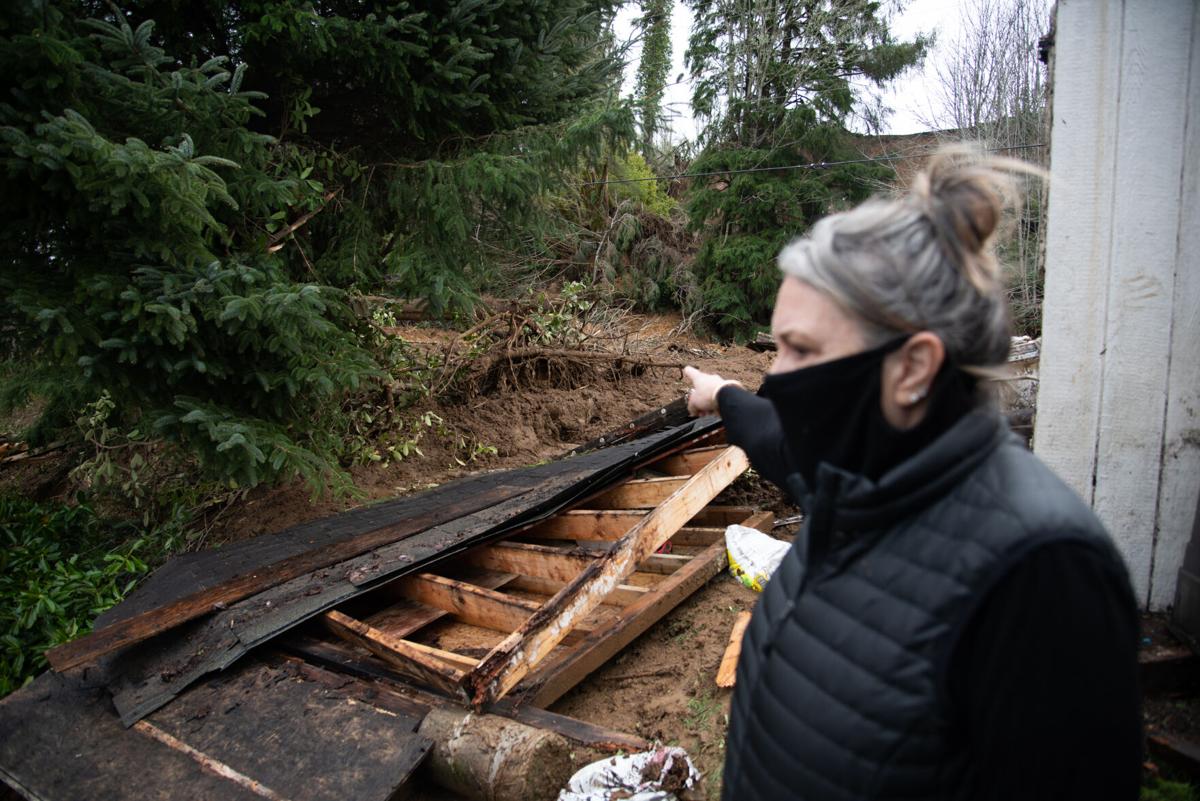 Cheryl Matson points to the landslide that took out a section of her property. 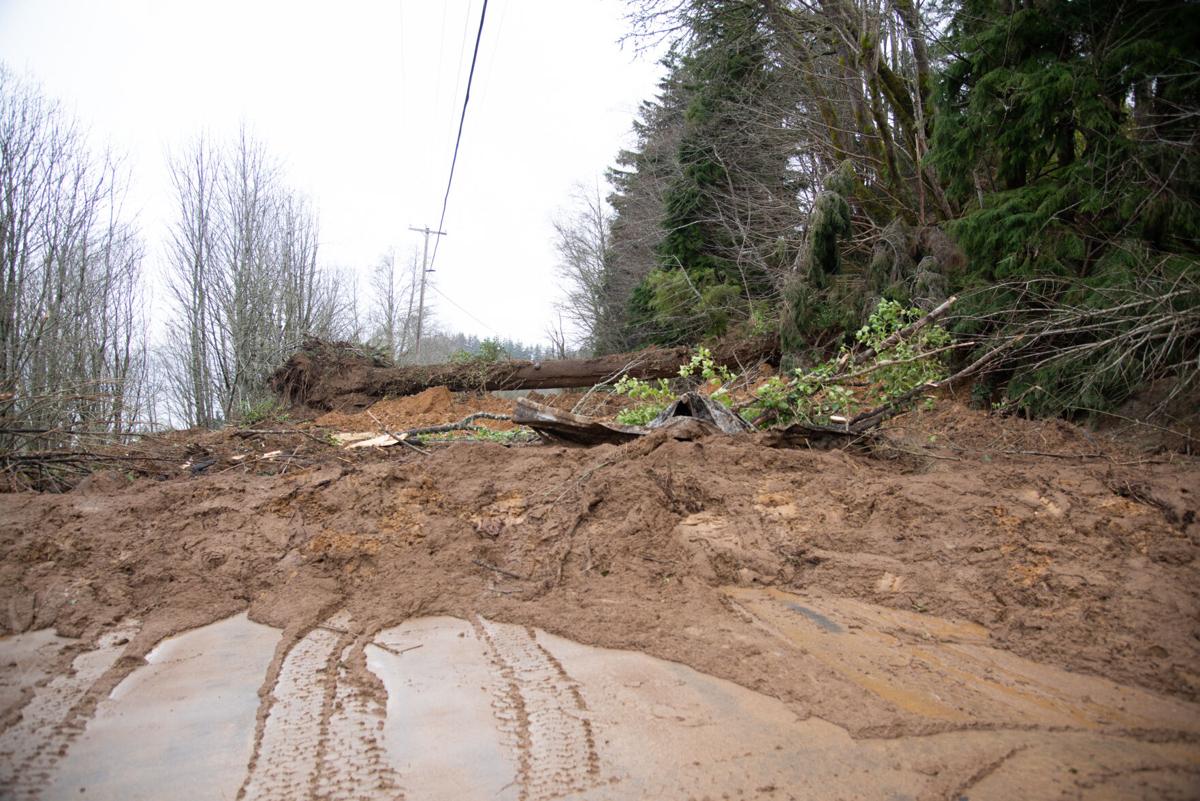 Ken Matson lives with his wife, Cheryl, in one of the few houses along Old U.S. Highway 30 beneath the former Blue Ridge military housing development at Tongue Point.

Matson was hanging out in his garage Monday when he heard what sounded like a street sweeper outside.

When the Matsons came outside, a large chunk of the steep ridge above had crashed down and buried the road just north of their house, destroying a shed and pushing a truck, a boat and a trailer down a hill.

The Matsons have been scrambling to fortify the property and determine responsibility for the damage. City crews helped sandbag and trench around the house to divert water and mud.

The road outside their house is controlled by the U.S. Department of Labor, which oversees the Tongue Point Job Corps Center down the road. Local officials have reached out to the federal agency and U.S. Rep. Suzanne Bonamici for assistance.

“Tongue Point is responsible for maintaining the roadway and removing the debris,” the Oregon Democrat said in a statement. “Leaders at Tongue Point have already secured emergency funding from the Department of Labor and have a contractor on-site. I will continue to engage with all the parties involved to make sure the federal responsibility is fulfilled.”

At the top of the slide is the broken foundation of a derelict house that burned down in December 2019. The Matsons suspect the fire weakened the soil and contributed to the slide. The property belongs to Paul Mossberg, who died in 2017.

“I don’t even care (who’s responsible), because my house is safe, my husband’s safe, my dogs” are safe, Cheryl Matson said. “I just care that somebody comes in and cleans up this mess.”

Jeff Harrington, the Astoria public works director, said the Department of Labor plans to have the road cleared by the end of the week. The road appears stable, and the city’s water main underneath is undamaged, he said.

“Like everywhere else in town, it’s just landslide terrain that, with enough rain, decided to move,” Harrington said.

The landslide is one of several to hit Astoria this year during a particularly wet winter. A slide in January east of the city trapped a passing truck and temporarily closed U.S. Highway 30.

Another slide in January sheered off part of a steep slope in Uniontown and uprooted the home of Cati Foss, leaving it wedged against a neighboring property and sitting on top of the sidewalk along Alameda Avenue. She and the neighbor suspect leaking pipes might have contributed to the slide.

A GoFundMe account has raised more than $37,000 to help the Foss family move the house, which is now sitting on blocks. Foss said her family is still trying to pay off the cost of moving the house off the sidewalk and doesn’t know yet whether it can be affordably salvaged.

“I’m still waiting to hear back from the insurance company,” she said. “I am trying to get a geotechnical engineer to kind of help speed up the process. But basically, where the house is right now, is where we’re stuck.”

Cheryl Matson said her home was built on bedrock, but that she worries about the trees still perched in the landslide zone.

In addition to the slide just north of her home, state geological maps show another large historical landslide just south of the property. Harrington said city records show two landslides occurring on Tongue Point in 1917, albeit without specified locations. He suspects the new slide just north of the home isn’t done moving.

“That’s what concerns me, is that the whole hillside is just one huge landslide, you know,” Harrington said. “Because it all looks the same when you’re out on the ground.”