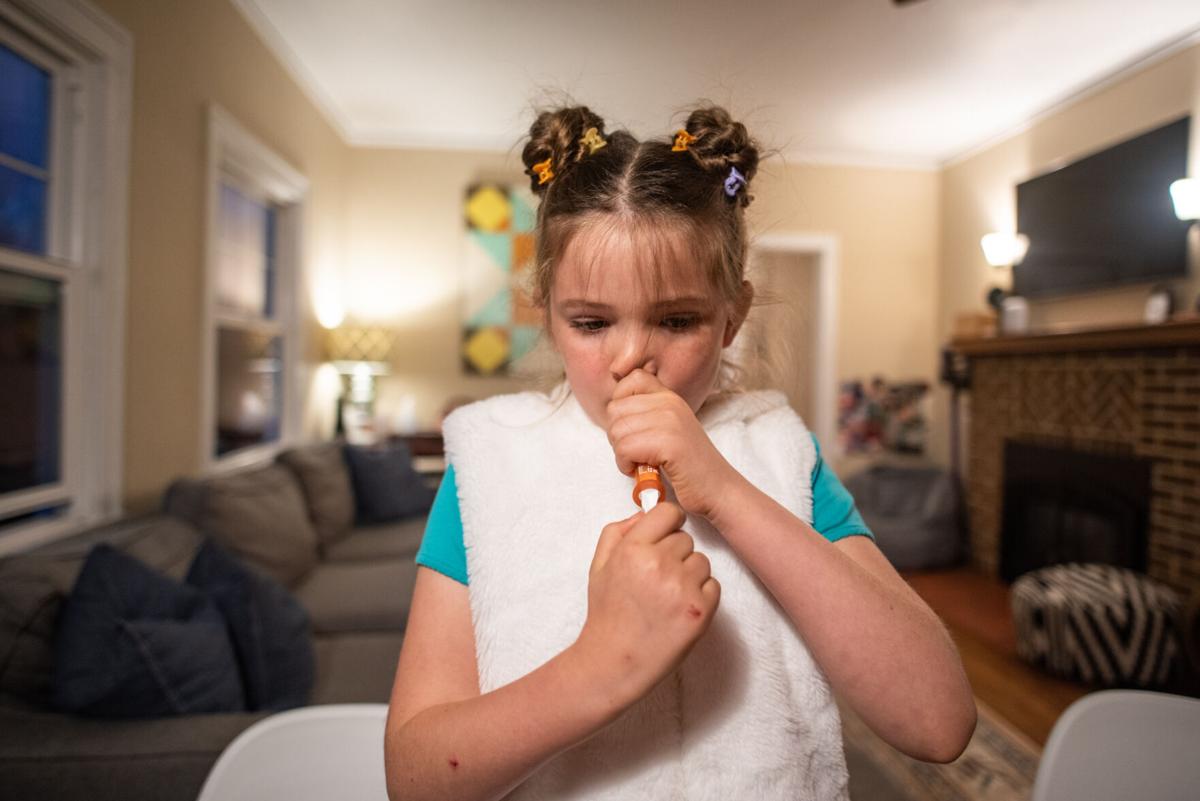 From her dinner table, Alina Citovic, 8, uses an oral syringe to take her daily dose of Evrysdi to treat spinal muscular atrophy. 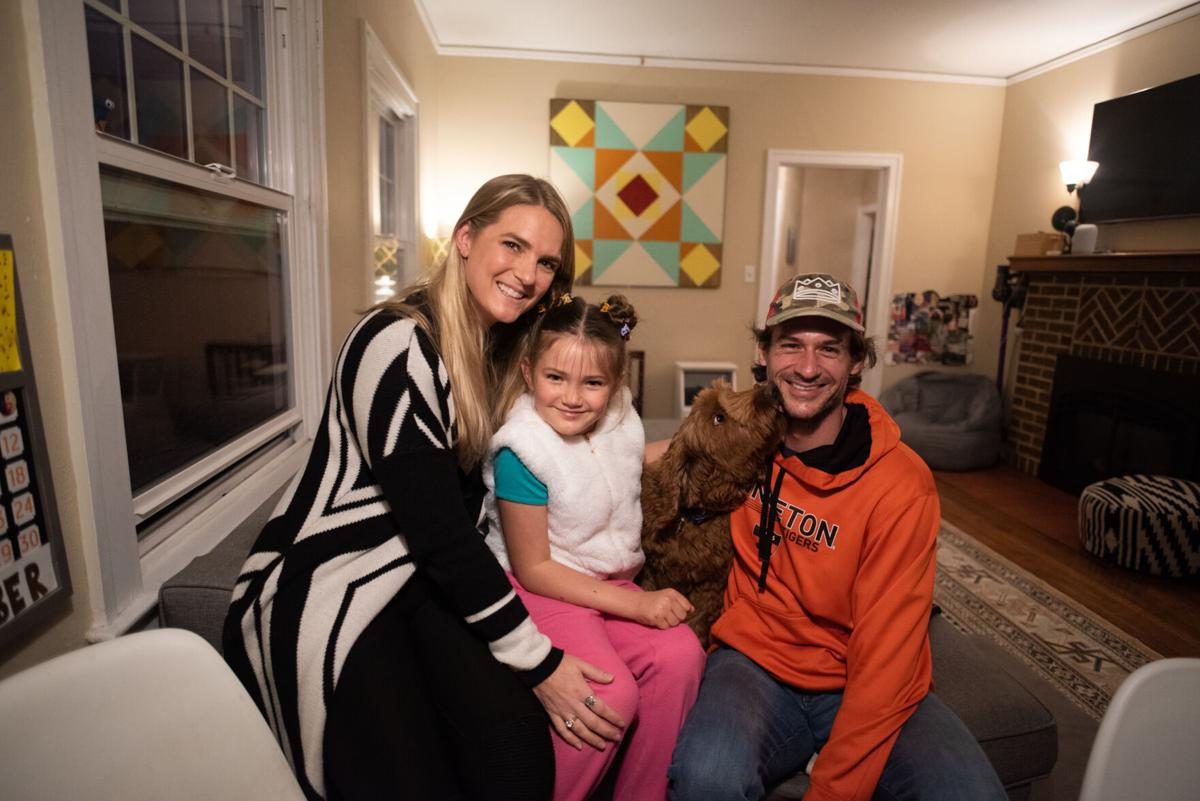 From left, Trudy, Alina and Djordje Citovic, along with their dog, ‘Gigi,’ sit in their living room in Astoria. 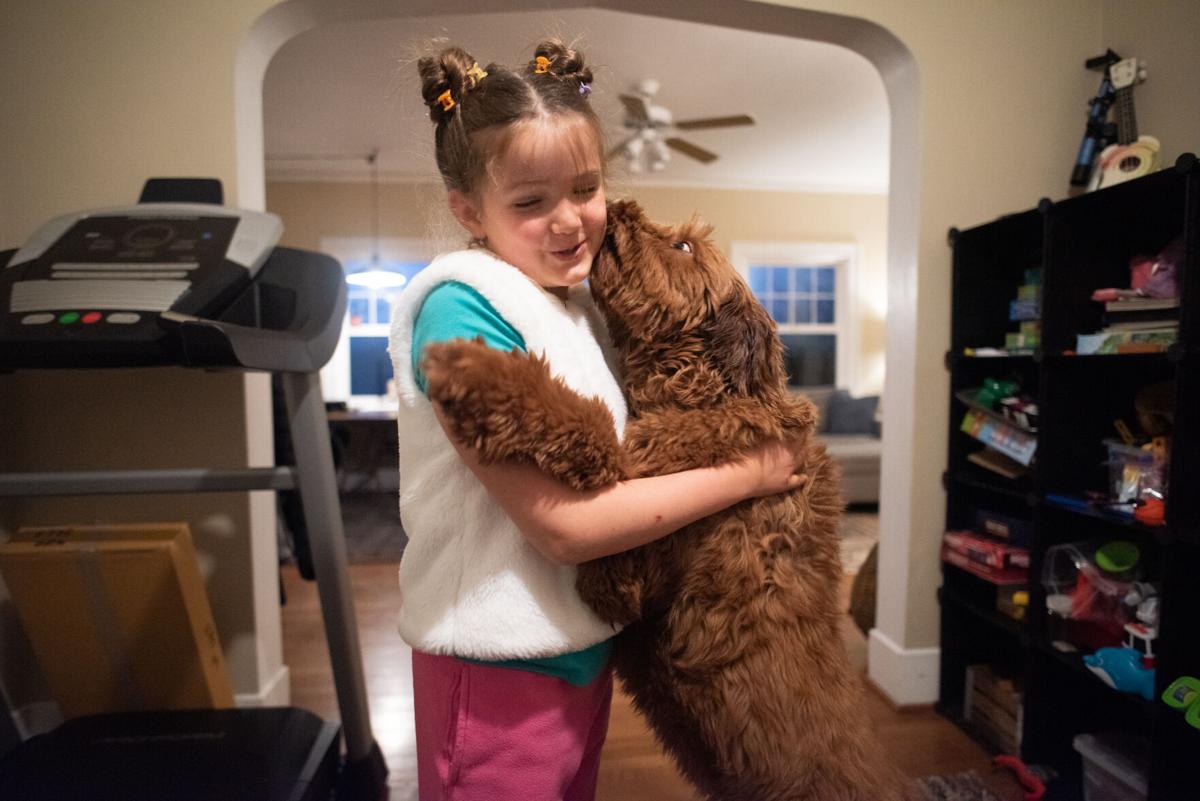 Alina Citovic’s dog, ‘Gigi,’ kisses her face while playing. Gigi traveled with Alina to her medical appointments in Portland. 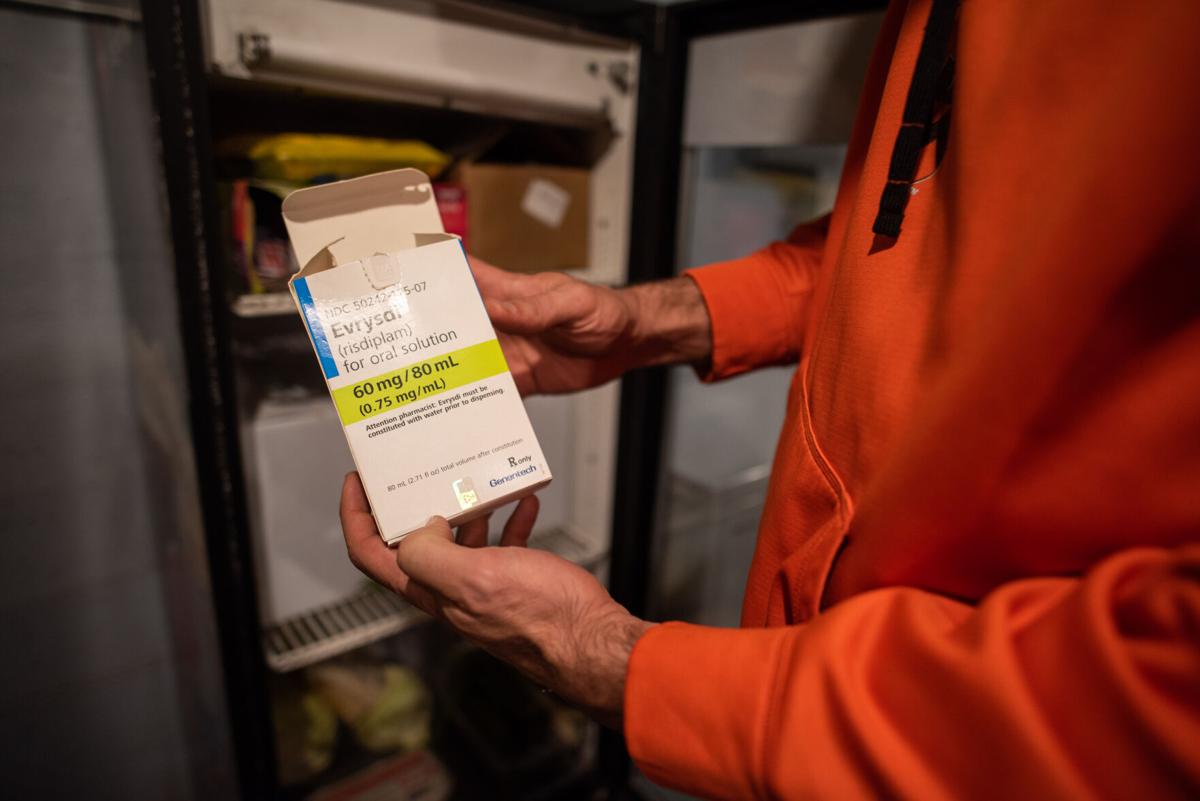 Djordje Citovic pulls a box of Evrysdi from the basement fridge. The medication is used to treat his daughter’s spinal muscular atrophy. 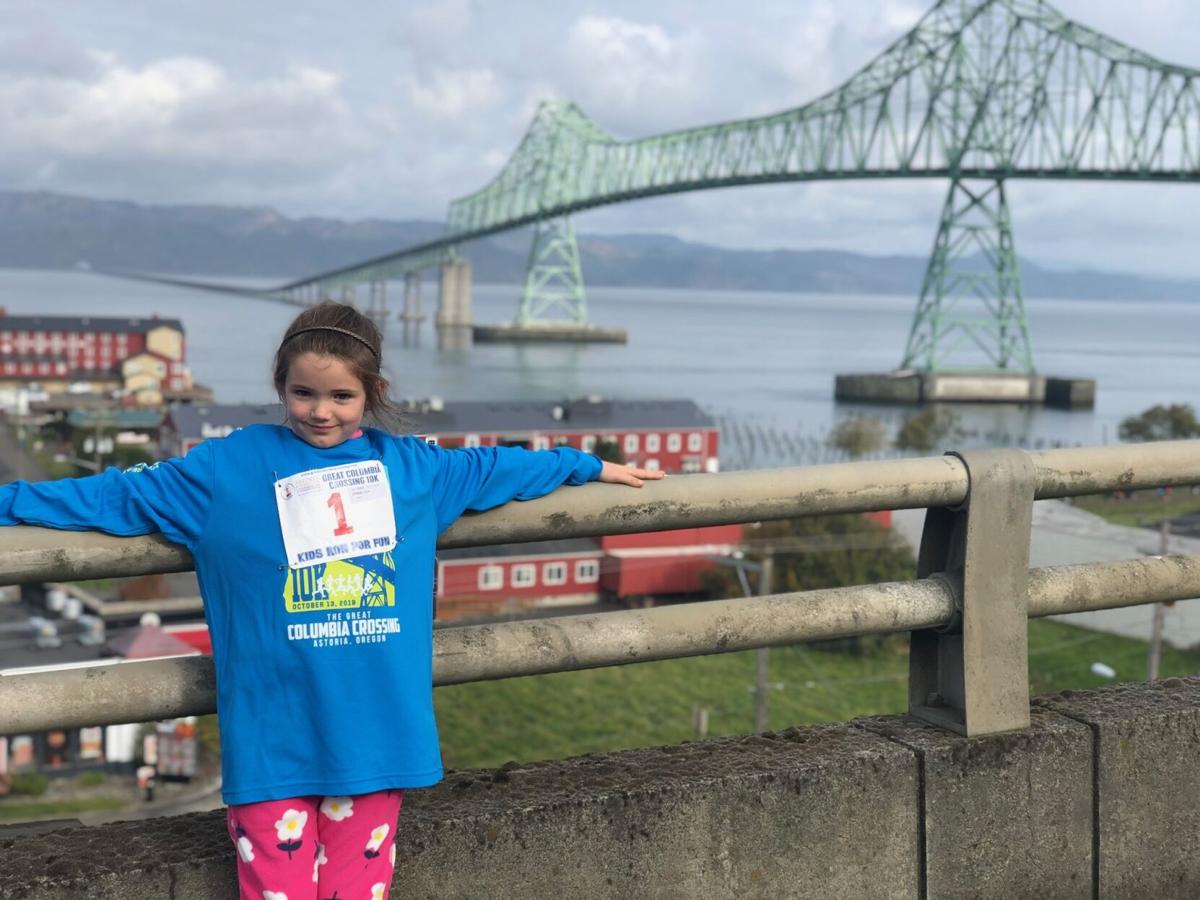 After walking over 4 miles, Alina stands on the Astoria Bridge near the end of the Great Columbia Crossing in 2019.

The 8-year-old Astorian recently became the first adolescent patient at Oregon Health & Science University’s Doernbecher Children’s Hospital to receive a new at-home, oral treatment for the disease. Her parents, Trudy and Djordje Citovic, and others are advocating for the state Legislature to make Oregon join other states that test for the disease at birth.

Spinal muscular atrophy, a form of muscular dystrophy, effects as many as 10,000 to 25,000 children and adults in the U.S., according to the SMA Foundation. One in 6,000 to 10,000 children are born with the disease, the leading genetic cause of death among infants and toddlers.

Alina was fortunate to be diagnosed with a milder form of the disease, limiting her physically but giving her parents time to find out what was wrong and find treatment. The Citovics noticed by 2 1/2 their daughter’s inability to run, jump, skip, or bicycle. At 4, she still lacked the stamina to go on long walks without a stroller.

“I explain that I’m not as fast as other people,” Alina said. “My body doesn’t have the proteins it needs.”

The family spent years undergoing intensive physical therapy, trying alternative medicines and going to the hospital for screenings. Alina wasn’t diagnosed until after Spinraza, the first treatment for spinal muscular atrophy, was approved by the Food and Drug Administration and screening for the disease was covered by insurance.

A little over a month after her diagnosis, Alina began receiving Spinraza, a medicine delivered through a spinal tap with a serrated needle.

“The spinal fluid is like a balloon, and you’re trying to poke it with a knife without making any spill out,” Alina said. “The first time … I ended up having a spinal fluid leak. I couldn’t walk for a few days.”

Alina had to be sedated and fitted with an IV to draw blood before each treatment. She developed a fear of needles, was diagnosed with medical trauma and received therapy.

The FDA last year approved Zolgensma, a one-time intravenous gene therapy targeting the root of the disease, but only useful for children younger than 2 years old. The Citovics kept track of clinical trials for a new at-home, oral treatment called Evrysdi, which the FDA approved in August.

Instead of traveling to Portland for blood draws and spinal taps, the family now receives a refrigerated package in the mail with nearly a month’s worth of the liquid oral medication. Alina fills a plunger with the medicine and squirts it into her mouth.

“It tastes exactly like strawberries,” she said. “And I think it’s a lot easier. Sometimes after you’ve had it for a while, it tastes like soda pop.”

Dr. Erika Finanger, the Citovics’ physician and the director of the pediatric neuromuscular program at Doernbecher, said Alina is the only of her 30 patients who have so far switched from the spinal tap to the newer oral treatment, for which there is little data to compare effectiveness.

“I think … this will become more common,” Finanger said of the oral treatment. “New things, some families are happy with the response they’ve seen from the previous medicine, and they aren’t yet willing to move to something different, because it seems less known.

“I obviously believe both of them work, or I wouldn’t offer it as an option at all,” she said. “But it’s just hard to compare.”

The Citovics are waiting to see how effective the oral medicine ultimately proves, but said Alina has shown improved stamina and strength. Meanwhile, they are campaigning for Oregon to test for spinal muscular atrophy at birth.

Finanger said 33 other states already include spinal muscular atrophy in their universal newborn screenings, allowing doctors to diagnose and treat babies with the one-time gene therapy before they show symptoms of the disease. Screening for the disease has been recommended in Oregon for 2 1/2 years, she said.

“It’s substantially more effective if you give it early, before children have weakness,” she said. “Waiting until six months of age for the babies or later … you’re just never going to get as much benefit from any of the medicines if you treat them once the kids have symptoms.”

Since learning about the disease, state Sen. Betsy Johnson said she has spoken with Finanger, Trudy Citovic, pediatric physicians and insurance lobbyists all pushing for expanded newborn screenings. There is momentum to draft legislation, Johnson said, but there are cost and other considerations.