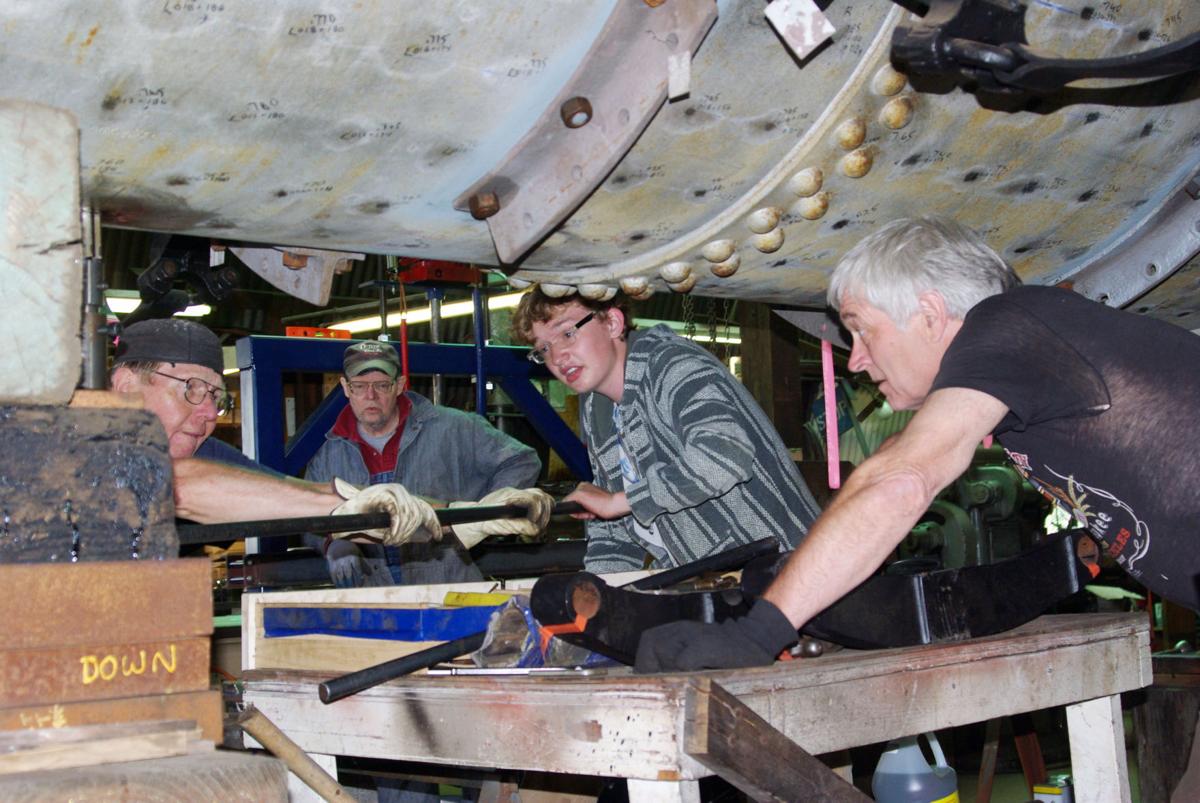 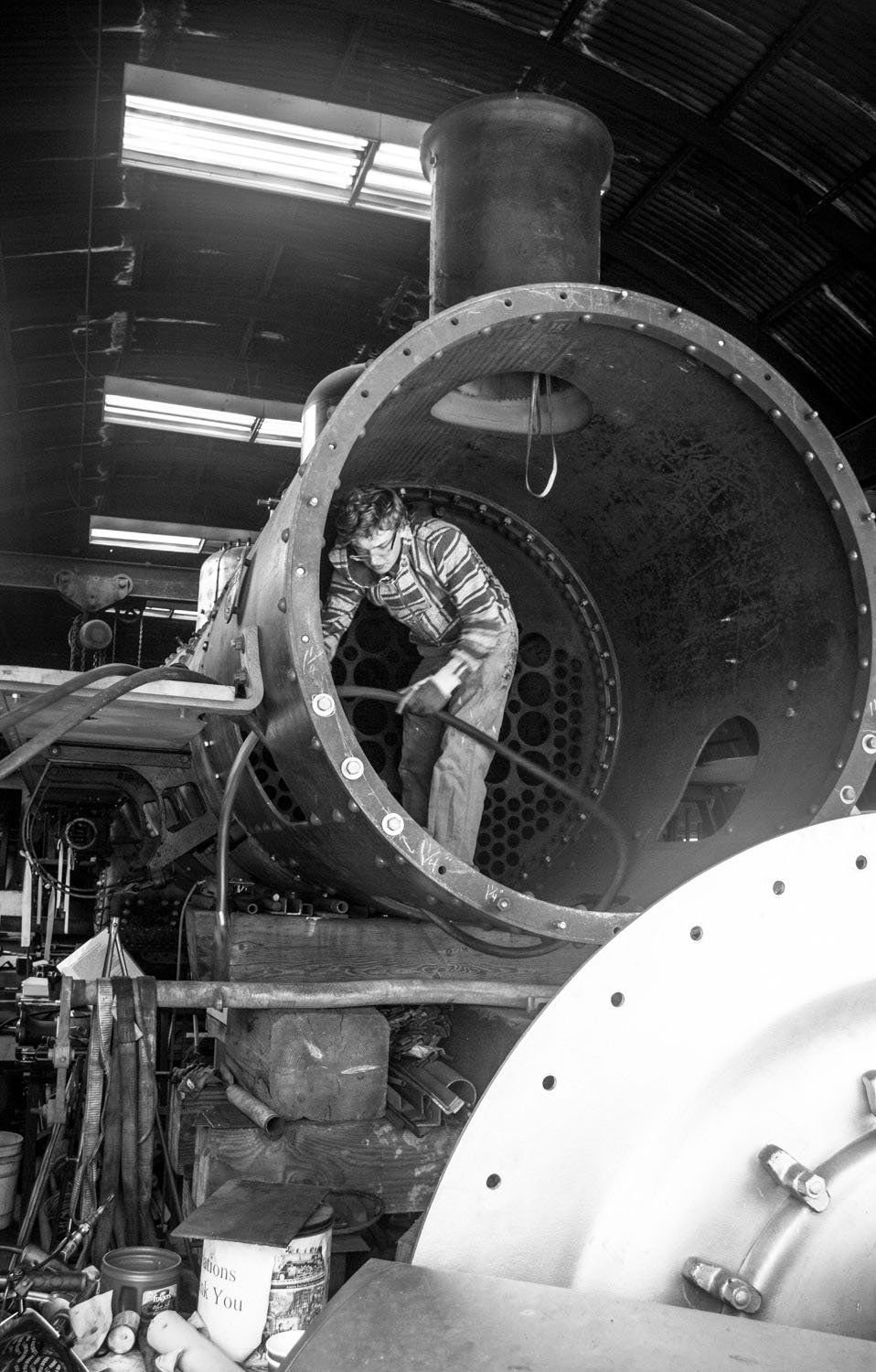 Image (Ryder inside locomotive) Ryder Dopp untangles an air hose inside the smoke box of No. 21. 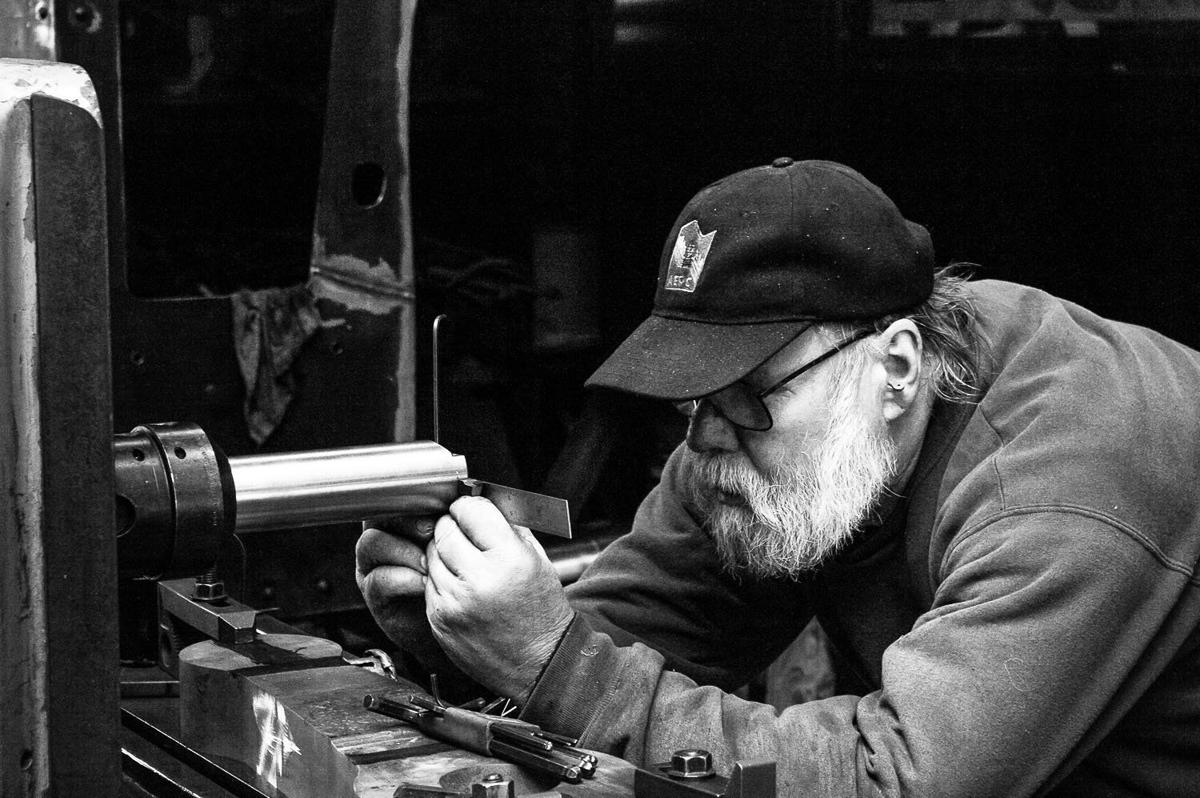 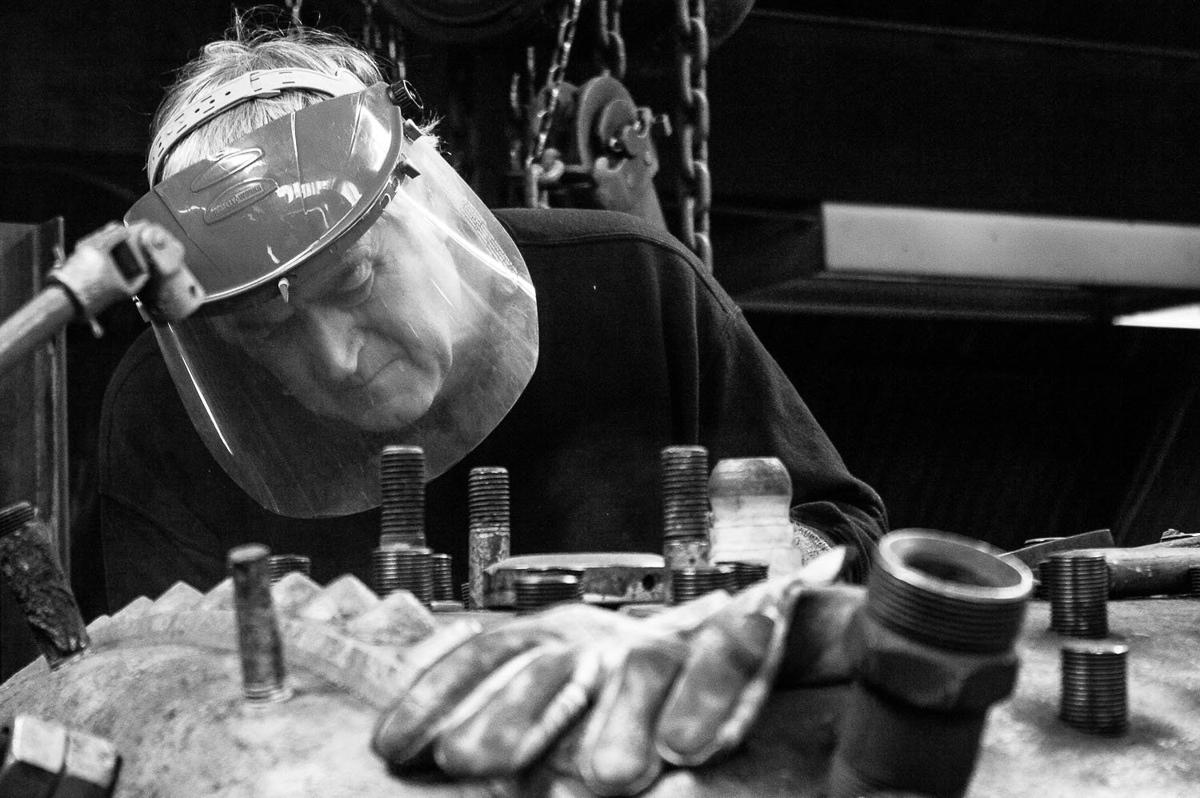 Volunteer Jim Smith adjusts crown stays on the top of the broiler. 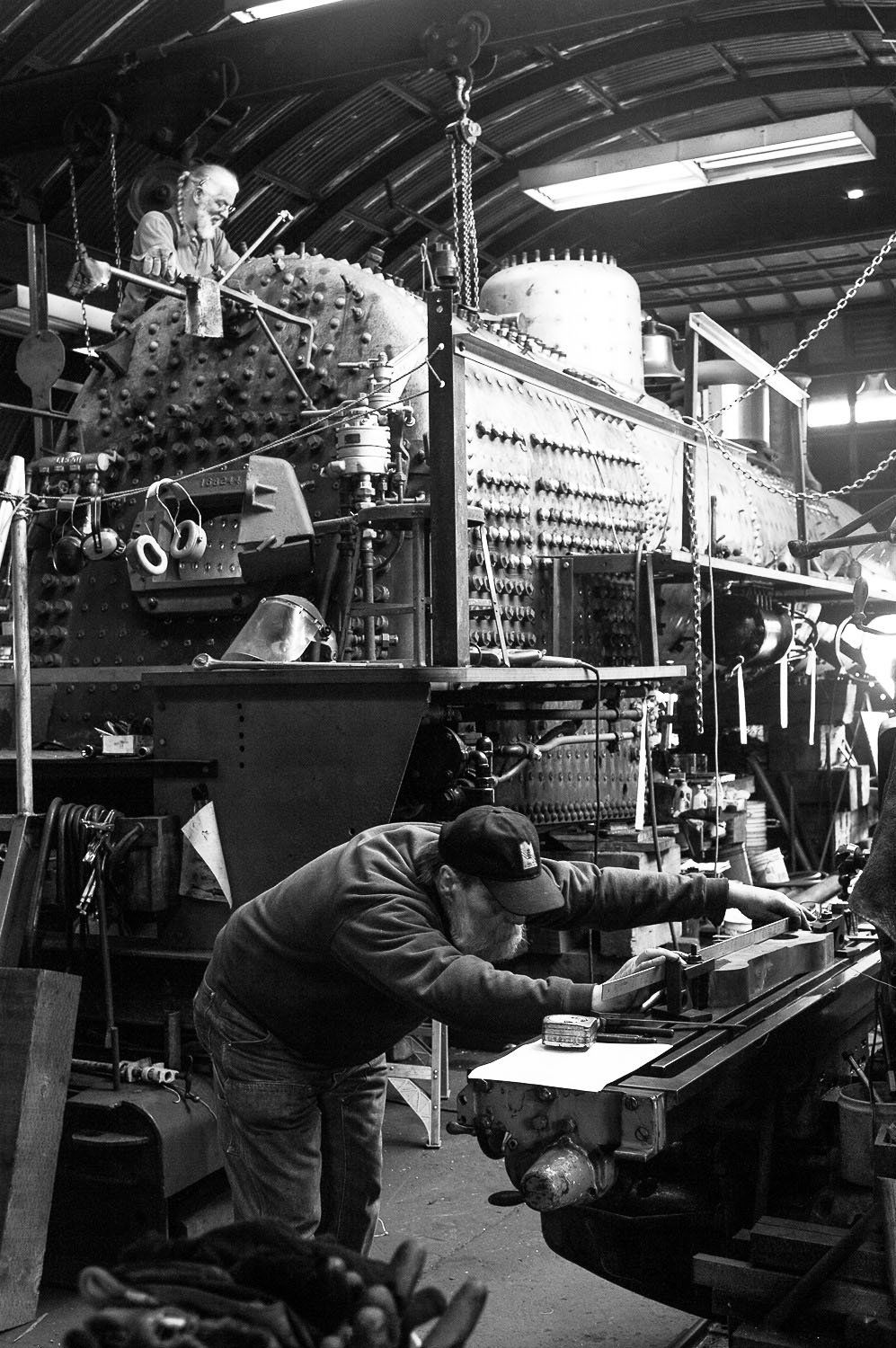 John Niemann (foreground), president of the Astoria Railroad Preservation Association, adjusts a piece on the horizontal mill, while volunteer Mark Clemmens works atop the broiler.

Image (Ryder inside locomotive) Ryder Dopp untangles an air hose inside the smoke box of No. 21.

Volunteer Jim Smith adjusts crown stays on the top of the broiler.

John Niemann (foreground), president of the Astoria Railroad Preservation Association, adjusts a piece on the horizontal mill, while volunteer Mark Clemmens works atop the broiler.

While many teens choose to spend their free time on social media, 16-year-old Ryder Dopp spends his Saturdays with fellow volunteers many times his age restoring an antique steam locomotive nicknamed the “No. 21 Baldwin.”

The core crew — led by Astoria Railroad Preservation Association President John Niemann — has been chugging away on the project for more than two decades inside a rusty metal shop near the tracks between the Portway Tavern and Astoria Trolley Barn.

Officially known as the “Santa Maria Valley No. 21,” the vintage locomotive in her prime was a workhorse pulling loads of sugar beets, vegetables and petroleum products along the 36-mile Santa Maria Valley Railroad line in Southern California. When the railroad fell on hard times, it was purchased at a sheriff’s auction for $75,000 by oil tycoon and philanthropist George Allan Hancock.

A very wealthy man, Hancock’s family was friends with Walt Disney and owned The La Brea Tar Pits. When the No. 21 was ‘retired’ in 1962, a small book called “The Final Run of #21” shows photos of Disney on the train.

The locomotive ended up in Astoria in a way reminiscent of the Astoria Riverfront Trolley’s origins.

The No. 21, like the trolley, was found disassembled in a field in Snoqualmie, Washington. The antique steam engine was sold by the Hancock family to an unidentified owner who had hoped to restore the machine but abandoned the mission. In 1991, Niemann and the Preservation Association jumped at the opportunity to purchase the relic for $17,000.

The community helped raise enough money to lift and transport the pieces to Astoria — a task that required six trucks. Once the locomotive was settled into the shop, Preservation Association volunteers stripped the engine’s paint, then sandblasted, cleaned and primed it in preparation for assembling it.

Their ultimate goal from day one: to restore No. 21 to the fresh condition it was in when the locomotive departed the Baldwin shops in 1925, and, one day, to run it as a tourist train along the Columbia River.

In 2015, Ryder Dopp — the son of Diana Kirk and Steve Dopp — had just moved with his family from Portland to Astoria. He noticed a sign across the street from his new house: “Astoria Steam Restoration Shop.”

Soon, the teen was at the shop offering his services.

“I could see the sign from my window and figured I’d just be put to work sweeping the floors or something,” he recalled, “but I think they put me right to work grinding handles the first day.”

He has been fascinated by trains ever since his grandfather gave him a train set when Dopp was a child; he can’t remember a time when he wasn’t in love with them.

“You know those DVDs of trains at the library? I would just sit and watch them for hours,” he said. “I’ve always had a passion for it.”

Dopp also has a paid part-time job as a summer camp counselor with the Astoria Recreation Center. But he isn’t worried about donating his time to the No. 21.

“How many people can actually say that they’ve done an interesting thing in their life like working on a steam engine? I’m honored to be able to do this,” he said. “Later in life, you’re not going to remember playing video games with your friends. It’s the experiences that matter more than the objects.”

A love of reading is what ultimately led Dopp to become a volunteer at age 11 when he lived in Portland.

“I volunteered with the Multnomah County Library system for many years,” he said. “I took the bus there by myself. I’ve always been really independent.”

After volunteering at several libraries throughout Portland, Dopp became one of the youngest volunteers to manage the “Summer Reading Program” through Multnomah County Library at the Holgate location.

“My family is really into reading and every summer we did the summer reading program at the library. I was also encouraged to get up and go do things socially with other people,” Dopp said. “When I moved to Astoria, kids my age were not quite as active in the community. I got into the train restoration to give myself something interesting to do. It can be a sleepy little town here sometimes.”

Though he is the youngest volunteer, the group treats Dopp as a team member.

“I feel that I fit in well with them,” he said. “Some of them have worked on the railway and military, and I just sit and listen to their stories. I find that interesting.”

Jim Smith, a fellow volunteer, said of Dopp’s involvement: “It’s pretty cool. We’re all old — we gotta have somebody to take over!”

Dopp learned quickly. “I really didn’t understand how a steam engine actually worked — they are incredible,” he said. “Most people are used to pushing a button and don’t even know how their car works. All these giant machines are interconnected and with no electricity — and they’re powered by fire.”

Dopp has come to respect the old technology.

Niemann added: “A lot of people think that because we’re in the year 2017, that we know so much more than those that built these (locomotives). In reality, we know less than what those guys knew.”

While steam technology is the way of the past, Niemann and Smith are relieved that a passion for the steam locomotive is not restricted to the older generation.

“In the old days, we fixed everything. Now you just buy a new motor. Fixing things is a dying art,” Smith said. He quipped to Niemann: “It’s dying with us, isn’t it, John?”

The restoration project has been a lesson in endurance. Various setbacks and challenges, such as funding issues, have repeatedly pushed back the finish line.

“My tongue-in-cheek answer is that June of 2025 would be a great time to unveil the train,” Dopp said. “I’m not sure if that’s even possible, but it’s the 100-year anniversary of when the Baldwin No. 21 was built.”

The locomotive — still a hunk of metal decades after she landed at the steam restoration shop — will look more like a real train once the wheels are underneath it. But this could be a long way off.

The crew meet every Saturday at the rusty workshop and continue to plug away whenever they have time. Still, the pace of the project can be frustrating, Niemann said.

“In the old days, they had 40,000 guys working on one of these. They were cranking out nine locomotives a week. The average delivery time was eight weeks,” he said. “The No. 21 locomotive was a special order. Ordered in February and delivered in April.”

Smith laughed: “My son was born at the time they towed this in, and he’s grown up now.”