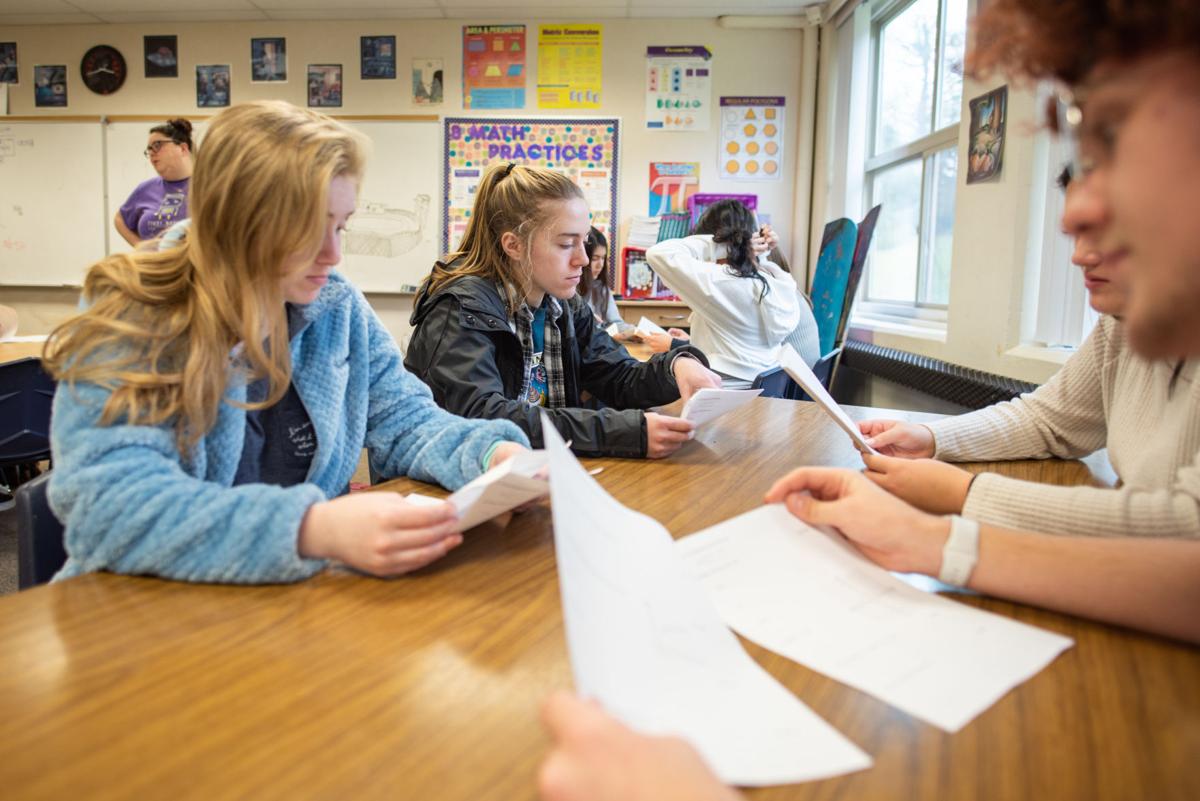 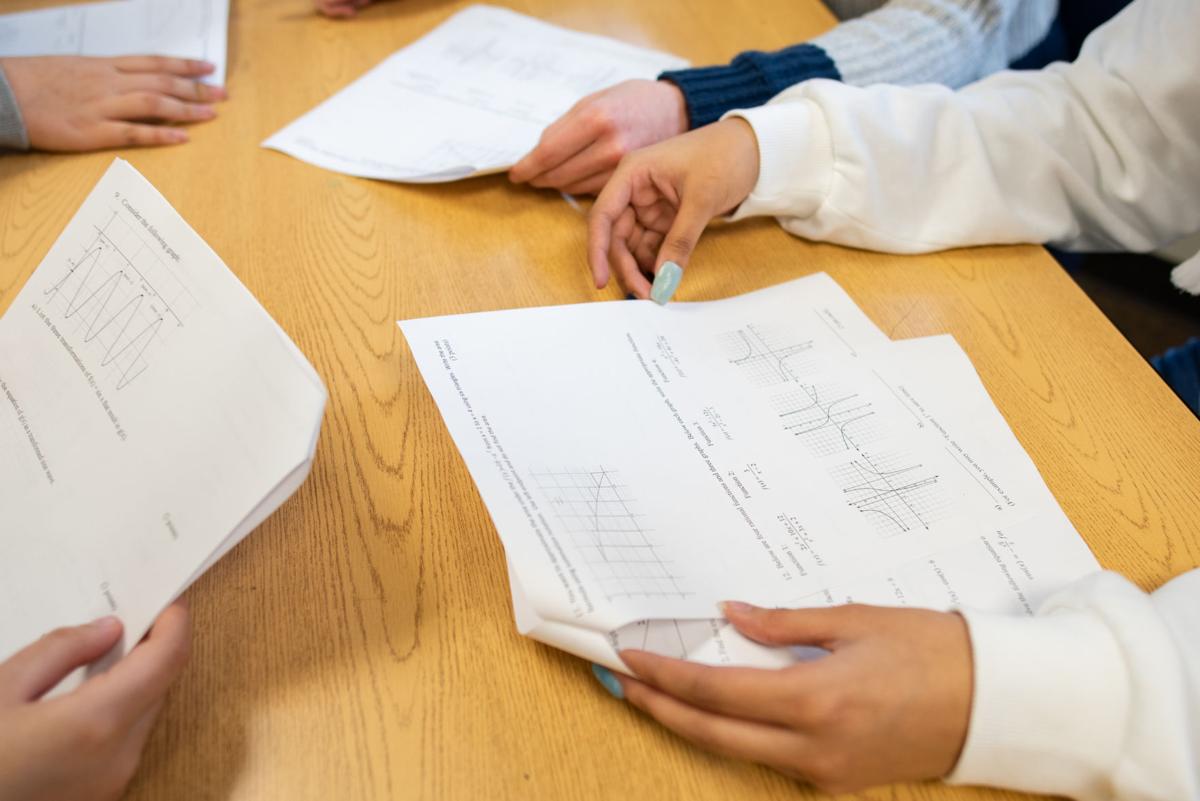 The new math curriculum by College Preparatory Mathematics was implemented at Astoria High School and turns tests into a learning tool by allowing students to review their exams before they take them. 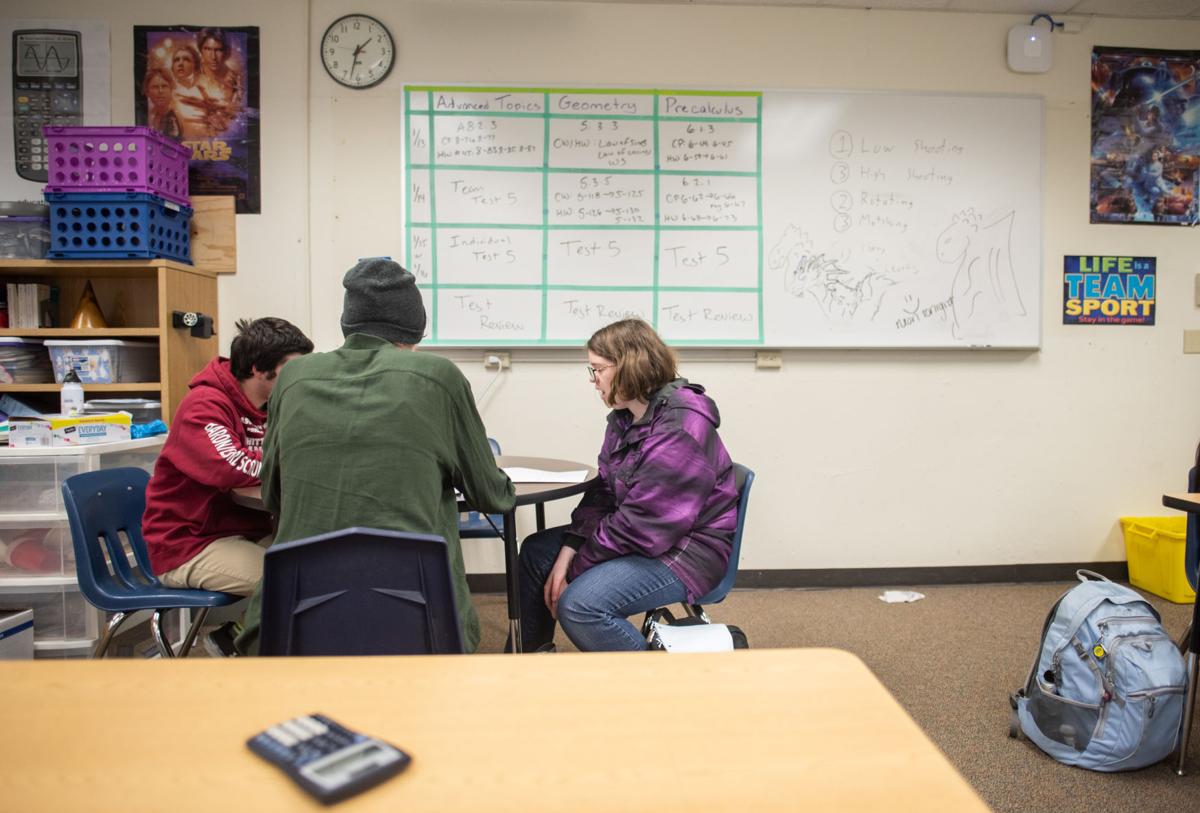 From left, Eli Harold, Isabella Scroup and Nessa Greeley discuss the problems on an upcoming exam.

Many of the Astoria High School students in Phillip Ero’s calculus class had struggled to answer one of the questions on a recent test.

The formulas they deployed had only complicated the question and the answer, Ero told them.

“The solution is very elegant,” he promised with the air of someone eagerly waiting for you to open a gift he knows you will love.

Ero handed out blank copies of the test they had already taken. The students broke into groups of three or four. They took turns flipping through the test pages, scribbling out equations and talking about how they reached their answers.

Midway through class, as students solved that one tricky problem with Ero’s help, there were actual exclamations of delight — and also frustration that they hadn’t seen the solution at the time.

Astoria High School is entering its fourth year of using a curriculum and teaching method that flips traditional math instruction and student assessment on their heads, and the new approach is working, administrators and teachers say.

Before switching to the College Preparatory Mathematics curriculum in 2016, too many students were struggling in math, said Liane Donovan, the vice principal.

The Common Core standards for math and English language arts adopted in Oregon a decade ago require students to get further in their understanding of math than they ever had before, she said.

For years, the high school’s math teachers created their own lesson plans and tests. There was no textbook.

One big change: Tests are a learning tool.

Students are able to look at tests before taking them and discuss what they see among themselves — effectively eliminating test anxiety and taking care of many cheating issues. They are forced to communicate and collaborate, and, in some cases, convince their peers that the way they solved a problem was correct.

Students review tests again after taking them, working through blank versions in groups before they even get to see their graded exams.

Teachers write and grade tests together, and find themselves frequently debating and refining questions. In the classroom, they constantly circle students back to previously learned concepts.

Gone are the days of a teacher standing at the front of the class and lecturing while students memorize concepts piece by piece, study for a test on those concepts and then move on.

Donovan, a former math teacher, compares the current model to a science lab. There is a little bit of instruction and then students are off, working and talking about problems and concepts among themselves.

“I have seen more math happen than I think I had ever seen in my career in math classrooms,” she said.

“As a teacher, it’s hard to let go of the reins a little bit,” said math teacher Chad Madsen. “Now we’ve done it and I see the results and I see how kids are growing from it.”

A byproduct of forcing students to interact and problem-solve with their peers is that students build “soft skills” not often associated with high school math classes, said Jessica Todd, the high school’s math department head.

The approach also seems to be helping students who would not normally consider themselves “good at math,” or who may have hidden behind more confident students.

But change came in fits and starts and there were growing pains as the math department figured out how best to use the curriculum and apply new teaching and learning principles.

“I hated it at first,” said senior Sam Gray.

He was not alone. Most of the students in Ero’s calculus class this school year resisted the switch, but have since changed their minds.

“This is so much better because it feels like you’re in control,” said senior Aaron Rickenbach.

“This lets you be a mathematician,” Gray clarified, “whereas with other math classes you’re a robot memorizing how to do things.”

For all the gains teachers have seen, there are still gaps that need to be closed.

Astoria Middle School has started to transition to the same curriculum, but students who arrive at high school without this approach to learning math in their background face a sort of culture shock.

The current roster of math teachers developed a teaching and testing model for the curriculum, but there will be a learning curve when someone leaves and a new teacher is hired. The teachers continue to assess how concepts taught in one class flow into the next.

Some of the younger classes are still struggling. Teachers are figuring out how best to work with these students to encourage group discussions and help them understand the material, Todd said.

“It will never be exactly where I want it to be because there’s no way of having the perfect day ever in education,” Donovan said. “It doesn’t work like that.”

But, as students and teachers both continue to refine their approach, “We get closer and closer all the time.”