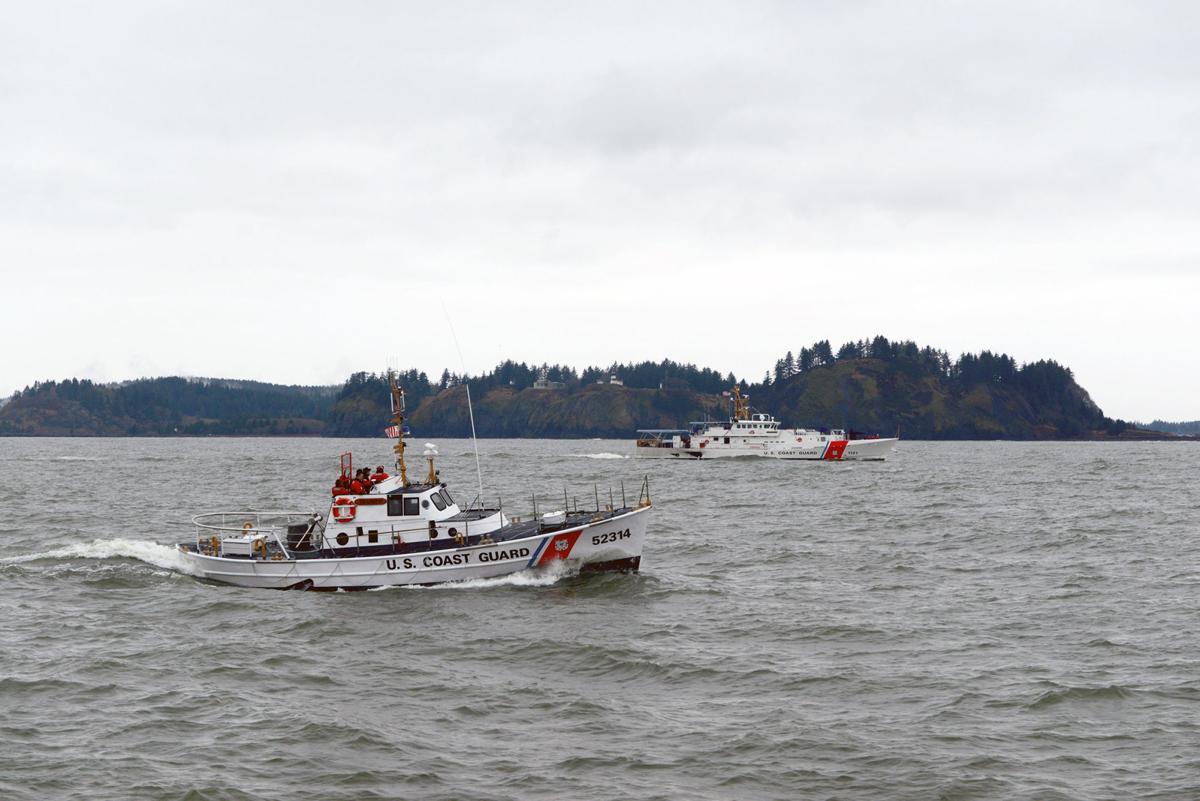 The Coast Guard cutter John F. McCormick transits up the Columbia River next to the 52-foot motor lifeboat Triumph II. 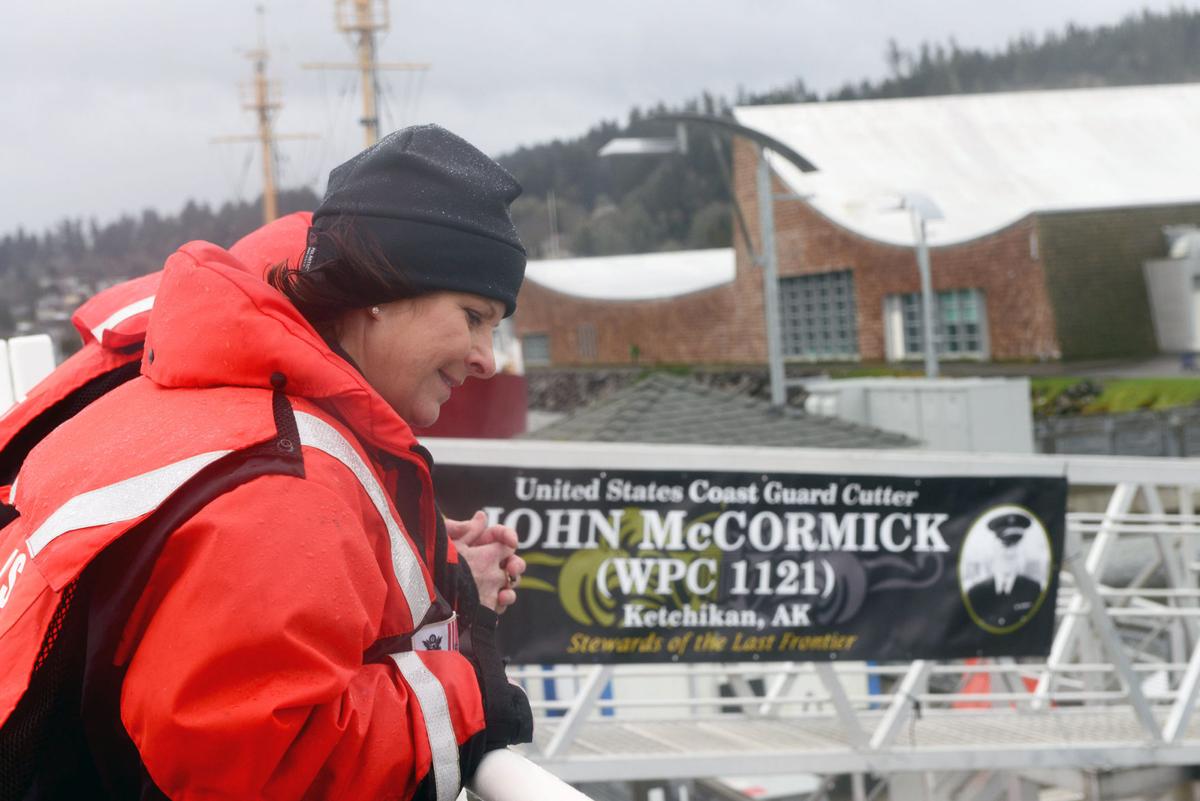 Linda Jarmer, the granddaughter of John F. McCormick, looks over the side of the Coast Guard cutter John McCormick as it is moored at the 17th Street Dock in Astoria. 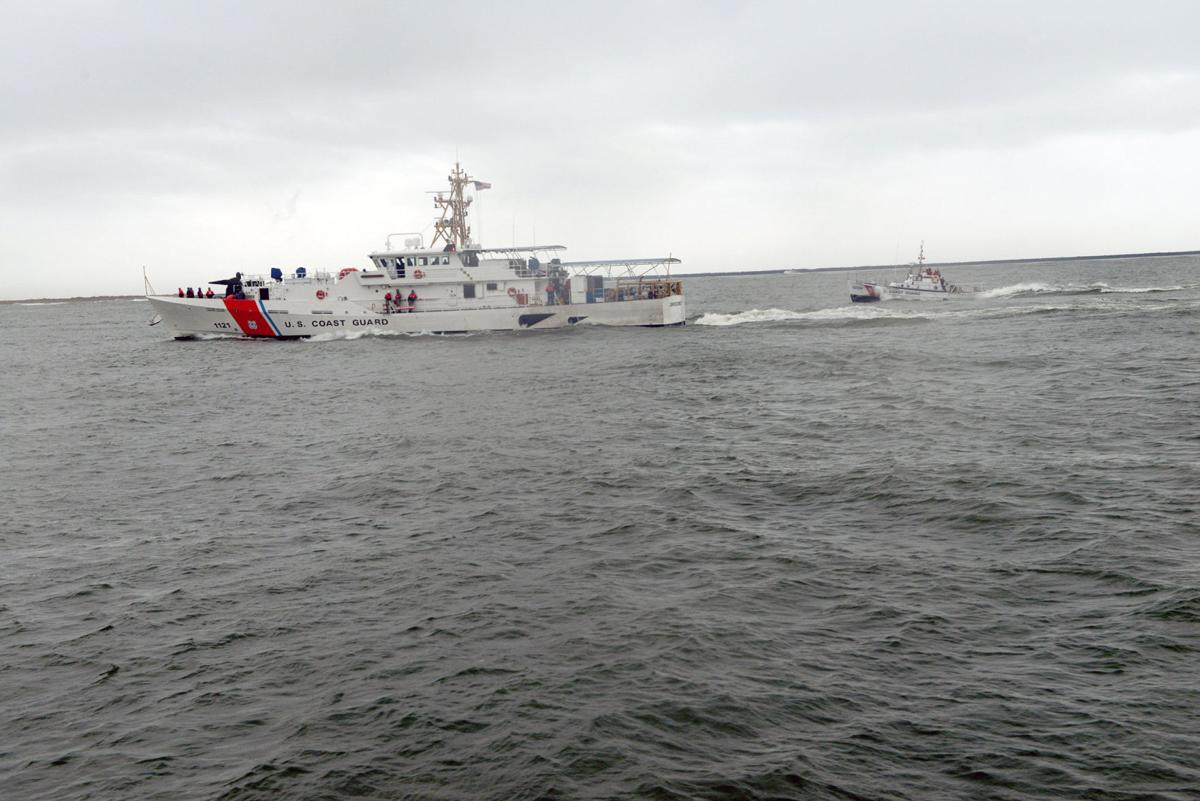 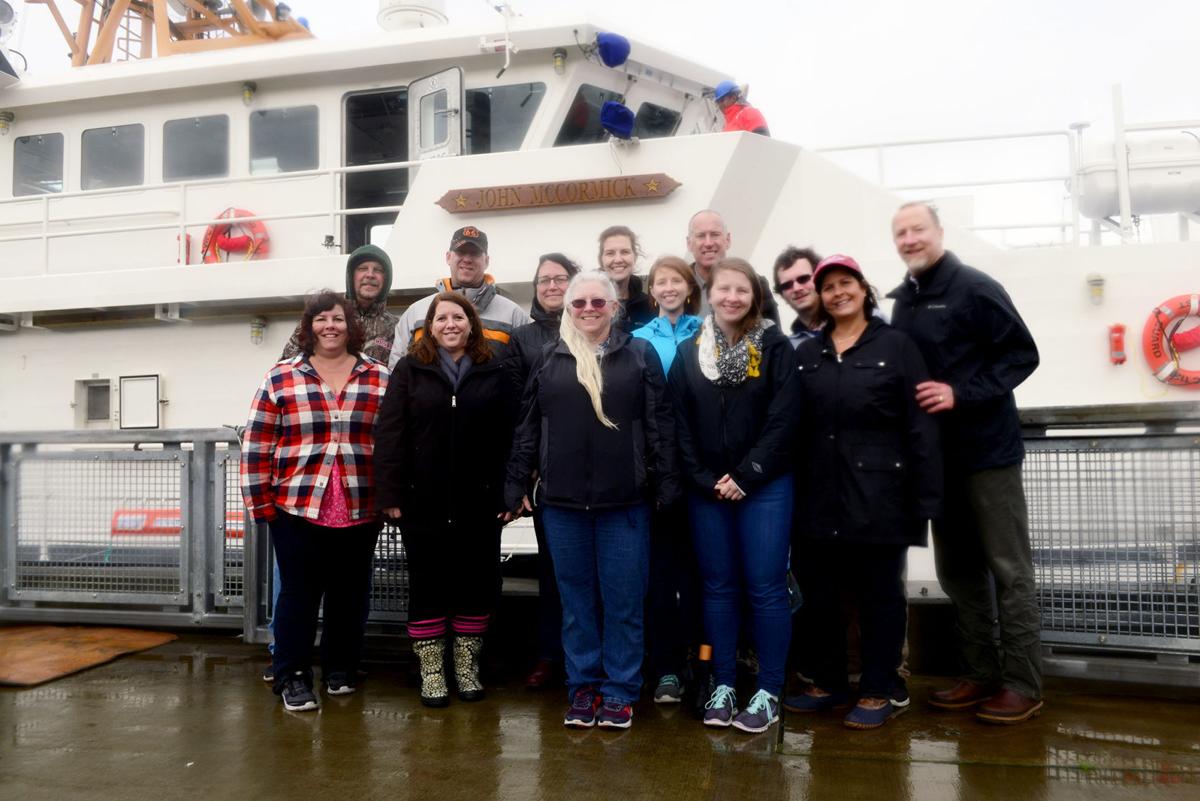 Descendants of John F. McCormick stand on the 17th Street Dock in Astoria next to the Coast Guard Cutter John McCormick during the cutter's visit to the area en route to its homeport of Ketchikan, Alaska.

The Coast Guard cutter John F. McCormick transits up the Columbia River next to the 52-foot motor lifeboat Triumph II.

Linda Jarmer, the granddaughter of John F. McCormick, looks over the side of the Coast Guard cutter John McCormick as it is moored at the 17th Street Dock in Astoria.

Descendants of John F. McCormick stand on the 17th Street Dock in Astoria next to the Coast Guard Cutter John McCormick during the cutter's visit to the area en route to its homeport of Ketchikan, Alaska.

Nearly 80 years after and roughly 2 miles east of the site of her grandfather’s daring rescue mission, Linda Jarmer could have been mistaken for a U.S. Coast Guard crew member herself.

A motor lifeboat glided east along the Columbia River on Saturday morning next to the soon-to-be commissioned John F. McCormick Sentinel-class cutter. While the vessels were still in motion, Jarmer, whose grandfather was the boat’s namesake, took a wide step from the lifeboat onto the cutter while dressed in a large, orange dry suit.

Jarmer made her way to the top deck to meet the 24 crew members on board. “It’s only right you came aboard the John F. McCormick that way,” Lt. j.g. Joe Petry said.

The 154-foot fast response cutter left Key West, Florida, five weeks ago and will dock at its home port in Ketchikan, Alaska, next week. There, a commissioning ceremony will take place in April. Another cutter, the Bailey T. Barco, will be commissioned there in June.

The John F. McCormick is one of 21 Sentinel-class cutters — the first on the West Coast— that have been put to use by the Coast Guard. Out of the 58 planned cutters, two may be docked in Astoria.

The newest cutter was at the 17th Street Dock the past two days and will leave for its final destination today. The public was invited to tour the ship Sunday.

McCormick was a commanding officer on the wooden motor lifeboat Triumph — stationed in Hammond — in March 1938 when he rescued a crew member who fell overboard. He received the Gold Lifesaving Medal for the rescue.

Jarmer, 56, of Portland, said her grandfather did not talk about the rescue much to her or her three sisters, preferring to remember it as just part of his job. She coordinated with the crew to develop the ship’s crest, which includes a salmon drawing commemorating McCormick’s love for fishing.

Near the time of McCormick’s death at 85 in 1986, the new 110-foot Island-class patrol boats were just being commissioned. Three decades later, the cutters are replacing many of these boats.

“I think he’d be amazed at the ship and everything it has on it,” Jarmer said.

The most noticeable upgrade from the Island-class is the ability to maintain top speeds. Both boats can reach speeds of roughly 30 knots, but the 20-cylinder engine on the Sentinel-class cutter allows it to maintain those speeds for a longer distance. Three generators significantly reduce the possibility of it losing power.

The cutter also holds a 26-foot stern launch boat that can glide from a lowered platform on the back of the vessel into the water. Its ability to slide into the water as opposed to being lowered allows crew members to use it on larger swells.

“We can get there farther and faster and once we’re at a scene, it makes it much easier to do law enforcement,” said Lt. Mike Moyseowicz, the cutter’s commanding officer.

Upgraded communication and electronic capabilities allow the cutter to function more independently, allowing the crew to handle certain tasks themselves rather than asking questions of a nearby station over radio.

“The technology just supersedes any other platform in the Coast Guard fleet,” electrician’s mate Pat Connolly said. “It blows your mind the stuff this boat can do.”

Upgrades to the living quarters such as separated toilets and showers make it easier for the cutter to incorporate men and women, Moyseowicz said. Three pictures of McCormick also adorn the wall next to the mess tables.

Crew members said Saturday that meeting McCormick’s family and sailing past the site of the rescue was a fitting last stop before the commissioning ceremony.