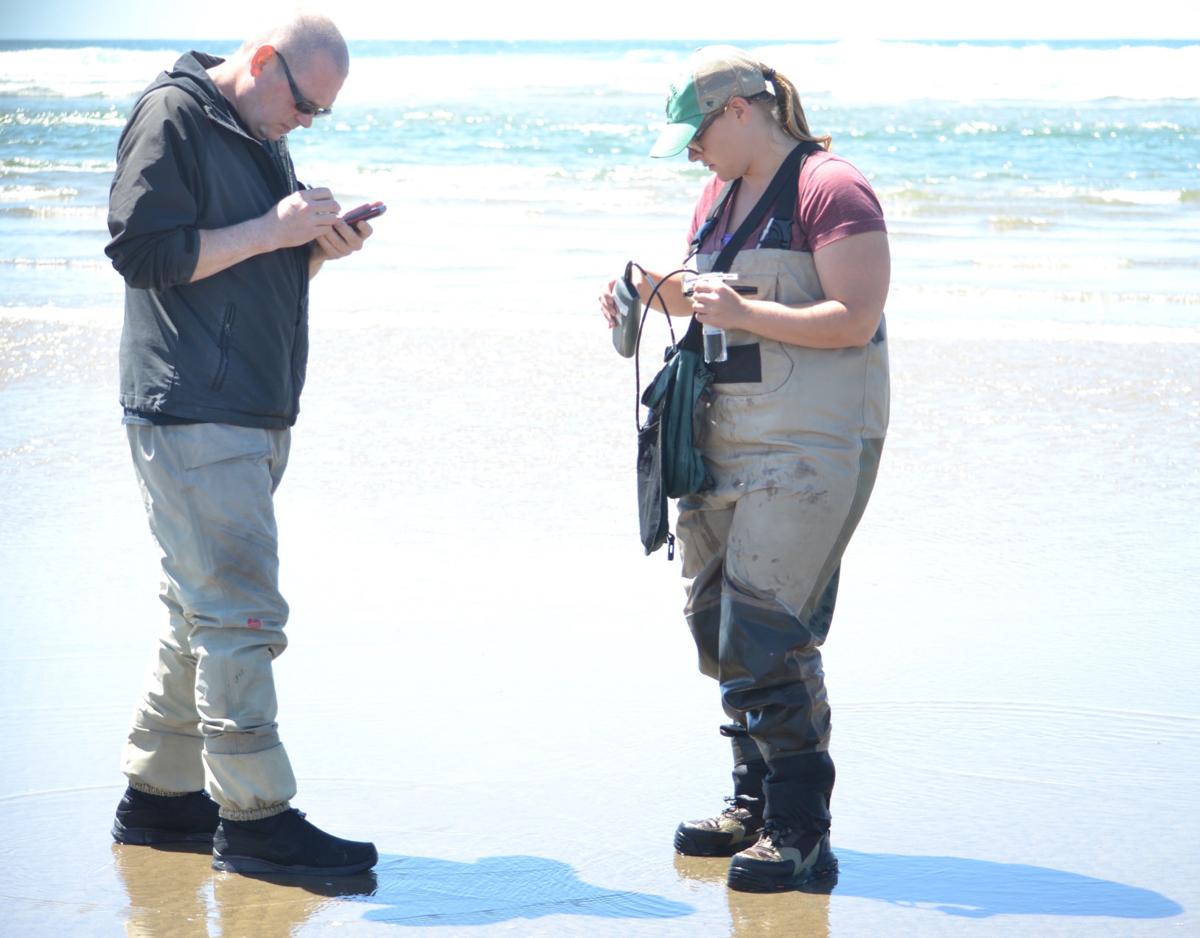 Thomas Lossen, left, writes down data as Hannah Moore runs tests on ocean water sampled in Cannon Beach this summer. Both are with the Oregon Beach Monitoring Program. 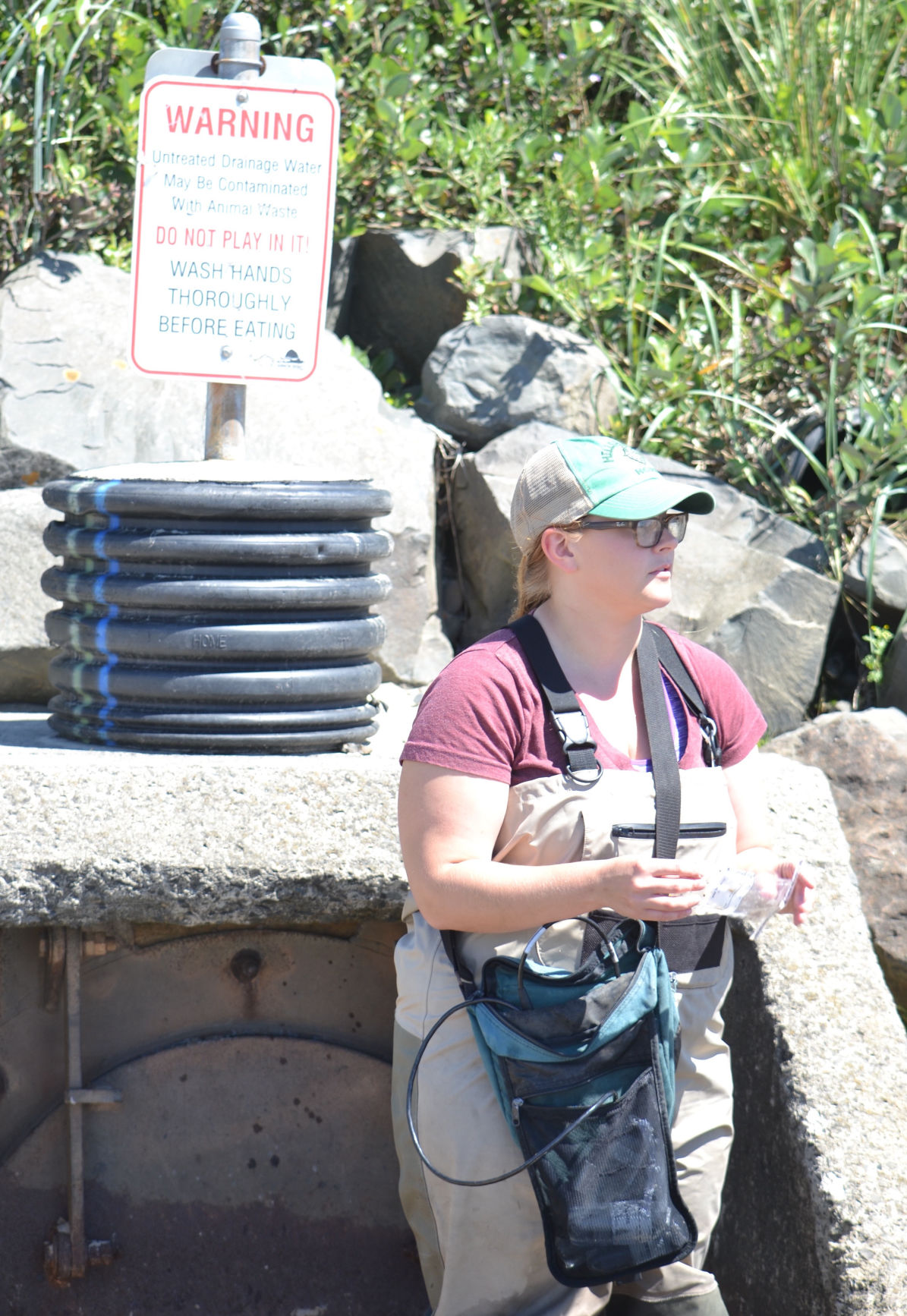 Hannah Moore with the Oregon Beach Monitoring Program looks out over the ocean after testing water at the Gower Street outfall in Cannon Beach during this summer's season.

Thomas Lossen, left, writes down data as Hannah Moore runs tests on ocean water sampled in Cannon Beach this summer. Both are with the Oregon Beach Monitoring Program.

Hannah Moore with the Oregon Beach Monitoring Program looks out over the ocean after testing water at the Gower Street outfall in Cannon Beach during this summer's season.

The Oregon Beach Monitoring Program will likely issue more public health advisories for beachgoers starting in 2017. Not because bacteria levels are expected to rise, but because the safety threshold for marine water is being lowered.

Representatives from the beach monitoring program, the Oregon Department of Environmental Quality and the Oregon Health Authority made the last of its coastal stops, including Cannon Beach on Oct. 22, in a series of informational meetings.

A matter of public safety

People who ingest water with high bacteria levels may experience gastrointestinal or flu-like symptoms, according to the EPA. An Oregon State University study found that 40 percent of 500 surfers surveyed from the Pacific Northwest reported ear infections or discharge at some point during surfing, 30 percent a sore throat or cough, 16 percent diarrhea, 10 percent a fever and 7 percent vomiting.

The monitoring program works with the Surfrider Foundation on providing swimmers and surfers with the opportunity to report water contact-related illnesses.

This year, the program issued four health advisories along the Oregon Coast, including one in Cannon Beach. In 2014, there were 13. In the last five years, Chetock said there have been 18 advisories along the North Coast alone. That number would have jumped to 43 if the new standards had been applied.

From 2010 to 2015, the monitoring program conducted 3,464 samplings along the Oregon Coast, 88 of which exceeded the current guidelines. That number would rise to 206 if the new guidelines were used.

Program staff anticipate an increase in advisories in 2017, which could place a strain on their limited funds if they have a bad year like 2014.

More demand on staff could mean fewer beaches monitored. Currently, the program monitors 16 of Oregon’s more than 90 beaches during its summer season. Chetock said they plan to use historical data and public input to decide which sites to sample in 2017.

The Blue Water Task Force tests beaches from Seaside to Port Orford. Cruse said they’ll “continue to monitor with the same frequency when the new BAV takes place” and added “it would be great if the state utilized our monitoring program results.”

The task force uses the same EPA testing method the monitoring program does. Volunteers and six labs would “easily fill any gaps” created by the new guidelines and funding constraints, he said.

In addition to the possible decrease in testing sites, residents and environmental groups like Surfrider expressed concern about public notification of high readings and freshwater results.

The monitoring program tests freshwater runoff, but unlike saltwater, will not issue an advisory if high levels of contamination are detected. This could put beachgoers at risk, particularly at the Gower Street outfall in Cannon Beach, Cruse said.

Although they are limited in actions they can take, Chetock noted that program staff do test freshwater runoff so they may identify the source of contamination.

The program isn’t able to lead investigations into the cause of high readings, but it can provide data, technical support and guidance if a city chooses to address the issue. Staff are finalizing this year’s monitoring data and searching for trends.

In its blog about the bacteria action level change, Surfrider acknowledged the program’s limited authority and encouraged residents to ask the Department of Environmental Quality to investigate an advisory system for contaminated freshwater.

Some, like Oregon’s state parks, have taken steps to rectify problems.

“There are other communities that just don’t want to acknowledge it because of the tourism aspect,” Chetock said. “They don’t want to scare people off beaches because they want the business.”

But solutions need to be found because notification alone is “not working right now.”

Now that the monitoring program’s public meetings are done for the time being, Chetock said they will review comments and reach out to coastal areas in the next couple of months for discussions.

Locally, the Surfrider Foundation and Ecola Creek Watershed Council have offered Cannon Beach officials assistance in notifying the public faster of high bacteria readings, and in reviewing the city’s wastewater and sewer infrastructure to find a solution to the issue.