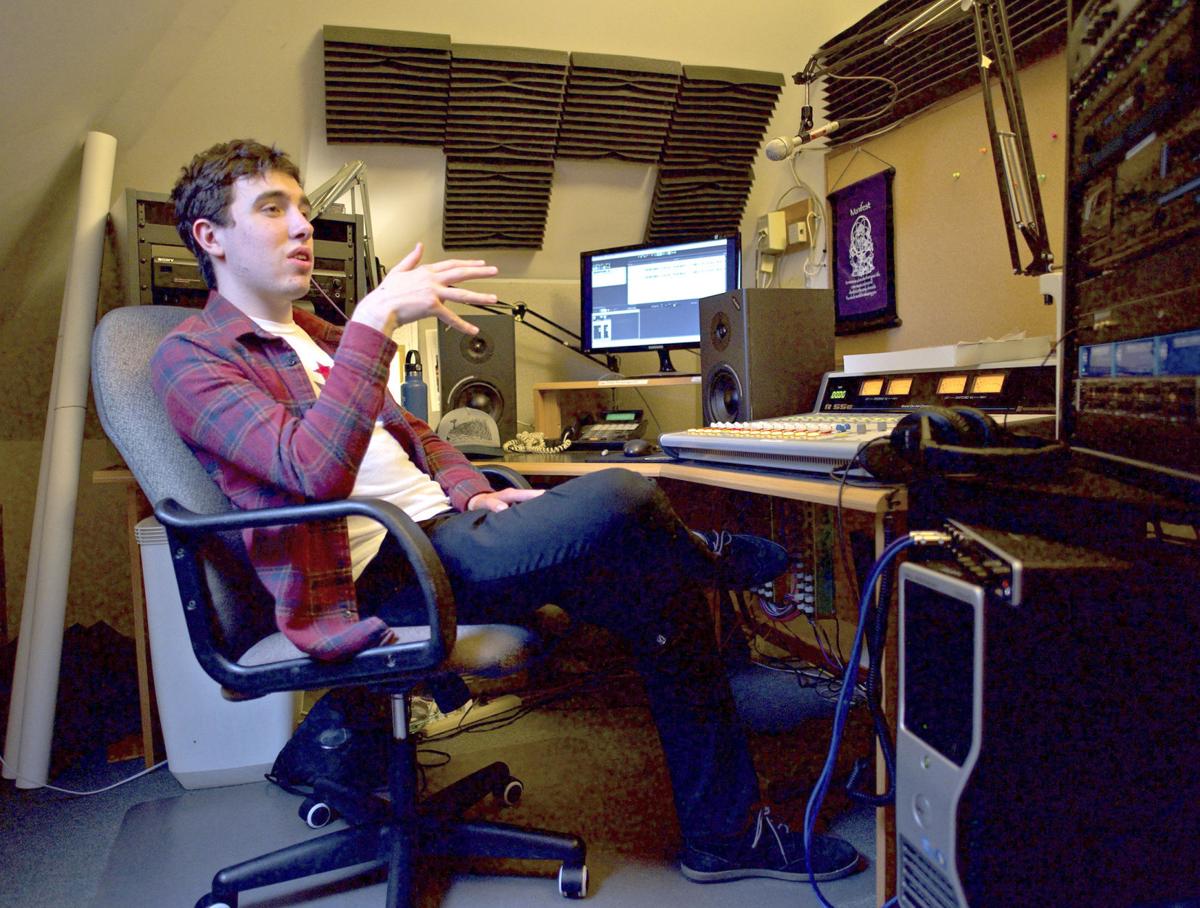 Sam Henderson talks about his work as an intern at KMUN. 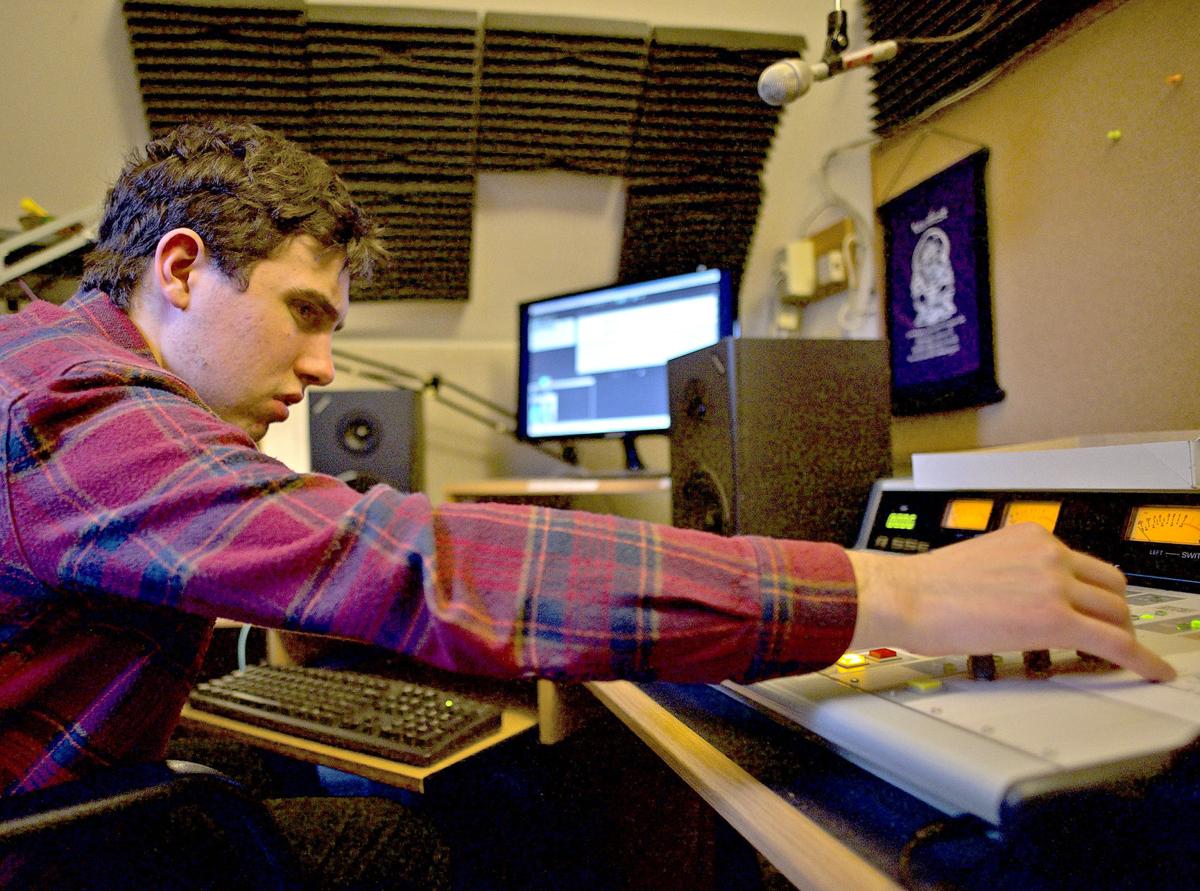 Sam Henderson adjusts the controls on a sound board at KMUN while working on a podcast. 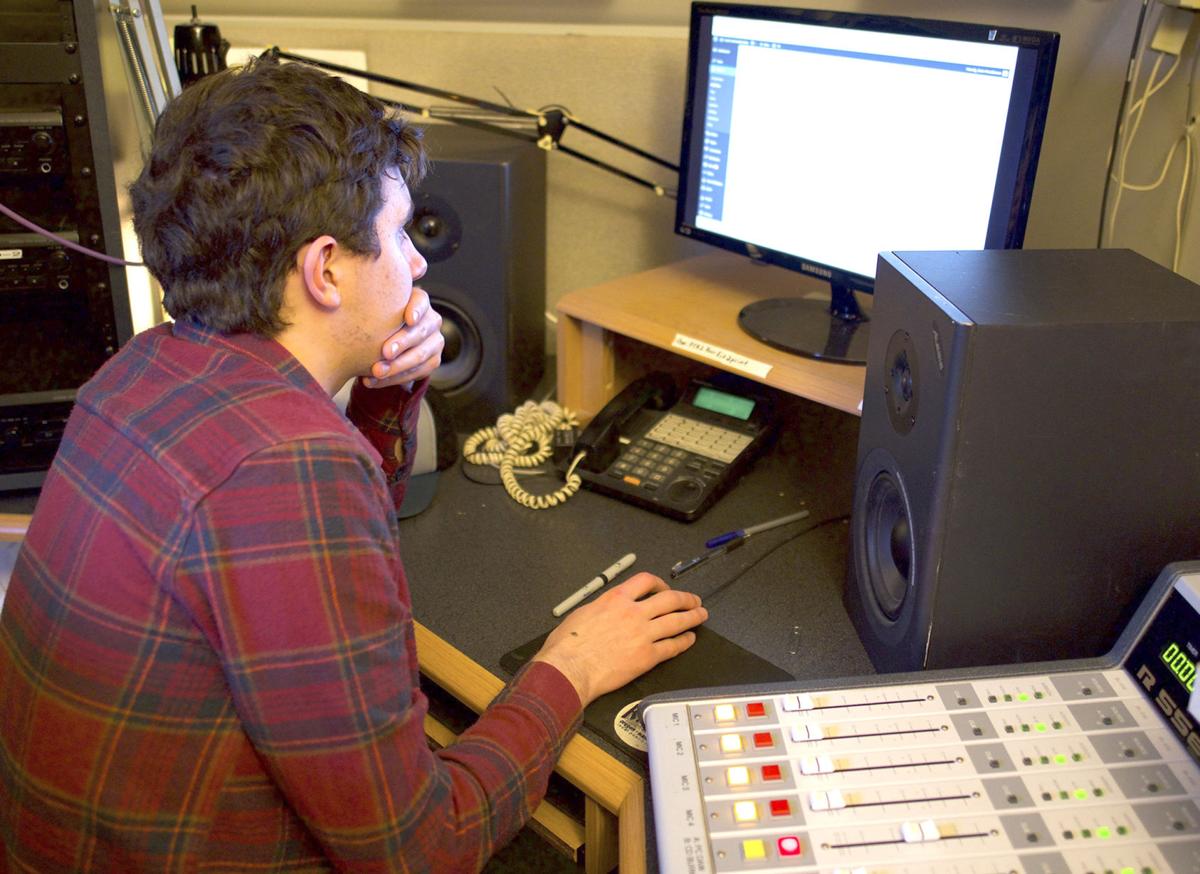 Sam Henderson works on a computer at KMUN. 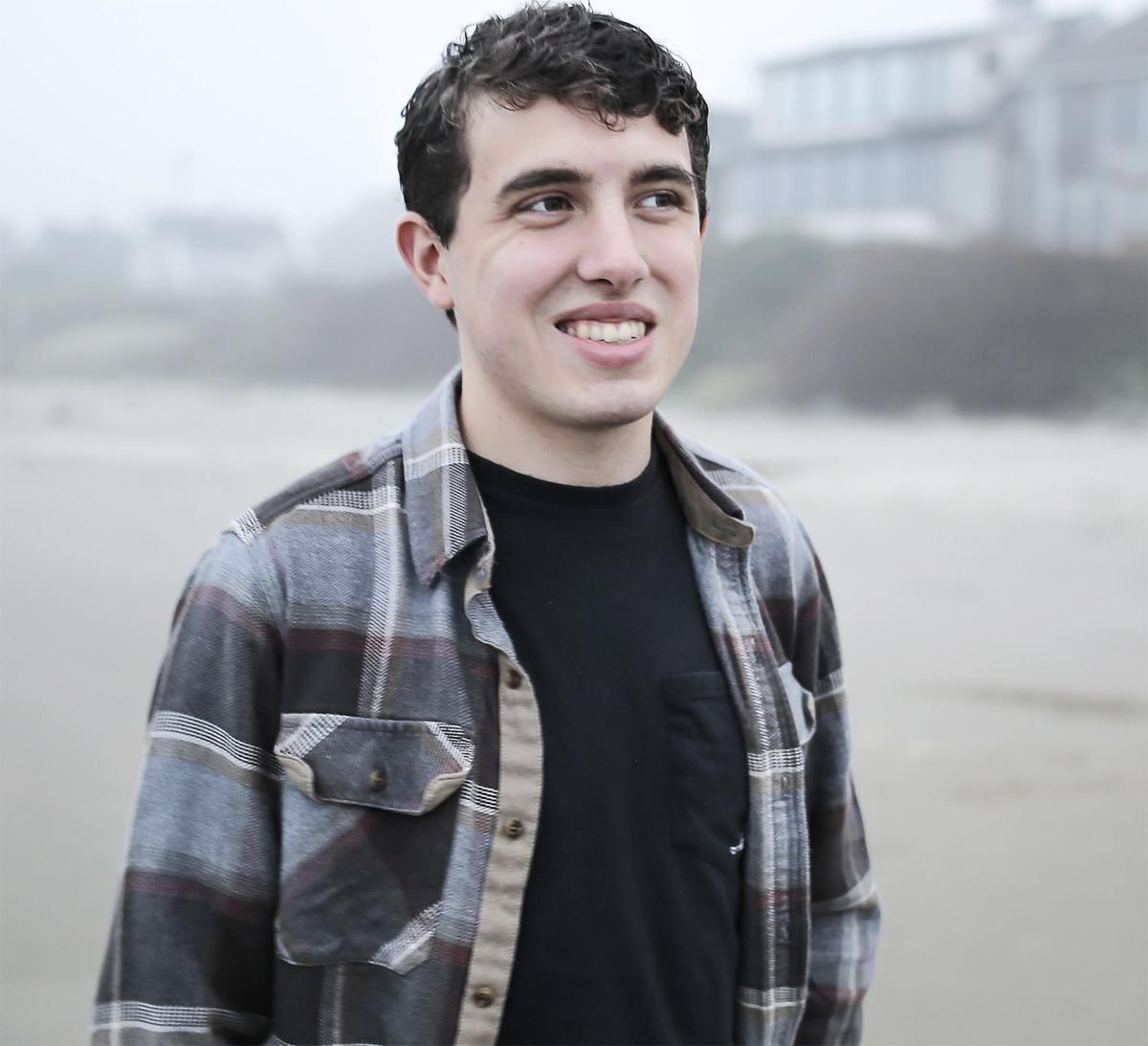 Sam Henderson in a senior photo.

SEASIDE — Sam Henderson is spending his last two months of high school like many other seniors. He is swamped by scholarship and final project deadlines. When he’s not at school, he’s finishing his Pacifica Project, which for him is editing podcasts as an intern at KMUN radio.

And in the fall, he will be a computer science major at the University of Utah. His dream is to make role-playing games so good that people stop calling video games “toys” and instead start calling them “art.”

But before he leaves the North Coast, Henderson wants to share his story.

It’s not because he’s interested in becoming “the autism guy” of his school.

“I’ve never wanted my life to be defined by it,” Henderson said. “I wanted to be the computer-science guy, or the fun, guitar-playing guy. Not the autism guy.”

It’s because it’s the part of his life he feels is most misunderstood. He hopes by telling his story other students with autism spectrum disorder will feel less alone.

“I want to give hope to those that may have trouble with the condition, and show them my story ... that there is a way for them to succeed in society,” Henderson said. “Just because they do have these conditions doesn’t mean they will fail.”

Elly Henderson was first tipped off that things were different with her son when he entered kindergarten at Fire Mountain School in Arch Cape.

“You would get him around other kids and you’d see they’re not really jibber-jabbering with each other,” she said.

Without being able to communicate effectively like his classmates, she saw her son beginning to act out. An article on autism from his teacher helped Elly Henderson and her husband connect the dots. Her son had plenty to say, they learned, he just needed help with when and how to say it.

“It really opened my eyes up to what his struggles were,” she said. “I didn’t even realize it at all.”

After researching autism spectrum disorder more thoroughly, the family decided to transfer Sam to Cannon Beach Elementary School, which had more access to special-needs services and more structure than the private school.

But in many ways, Elly Henderson was starting from scratch. She was charged with getting a small school to understand the needs of her son while making sure he didn’t feel singled out.

“When he’s on the books as needing special education services, does that ever prevent him from anything?” Elly Henderson said she wondered at the time. “I want him to become president of the United States if he wants to. What does this really mean for his career and his life? It’s intimidating.”

It started with working with an autism specialist to develop an individualized education program. The plan was designed to take away the inherent barriers that inhibited Sam from learning in the same way as his classmates.

“It was pretty clear at Cannon Beach Elementary, because it was a really small setting, that not a lot of teachers had experienced it there,” she said. “I think 13, 14 years ago, we were just at the cusp of figuring out that these kids weren’t behavioral problems, that something was coming to the surface that was creating the behavior.”

He would do the same work. But when the rest of the class would sit in a circle and take turns reading passages out of a book, Sam would be allowed to listen to a headset alone. Instead of receiving directions verbally, he would get them in writing so he could clearly understand the expectations.

He would be given extra time to do assignments. Not because he couldn’t do them, but because he would try to do them too comprehensively, a trait he still struggles with today.

“I have a perfectionist personality,” he said. “Put me into an environment such as tests, and I get really stressed about thinking of giving the best answer possible instead of just getting the assignment done. And that’s my greatest strength and greatest weakness I would say.”

Henderson sees his accommodations as a double-edged sword. At points they were helpful. But they couldn’t do much to address some of the stigma he felt from his peers.

Around third grade, he recalls, his friends dared him to yell the word “hell” around the playground. Missing the joke, and not realizing “hell” was a bad word, he took on the dare, and ended up getting in trouble.

“There were times I feel my deficiencies were taken advantage of,” he said.

Another struggle that was hard for Henderson to express was how difficult unexpected change was for him.

Take learning cursive, for example. For his peers, it was just another new topic.

For Henderson, it was an affront to common sense.

“I could never read it, and I always preferred (writing) to be as straightforward and readable as possible ... so I refused to use cursive,” he said.

In an attempt to compromise, his teacher suggested he write every other sentence in cursive. His solution was to write one, exceptionally long sentence.

“When they started catching on to me, I’d say ‘OK, here’s a sentence in cursive that’s like, 12 words long,’” he said. “I usually found my ways out of doing change, but it would make me feel absolutely terrible when I did have to actually adjust to something as sudden as that.”

As he entered middle school, Henderson began sensing a shift. Right out of the gate, it was more difficult to talk to people. For someone sensitive to excessive noise and crowds, there were few places more stressful than the hallways of a public school.

The friends he had made in elementary school became more distant. The rules of social interaction were changing, becoming more complicated and difficult for him to understand. He would get interrupted or talked over.

“I didn’t feel like I was important in my friends’ lives anymore,” he said. “Everyone was everyone’s friend except me.”

As a parent, it hurt to see Sam’s friends — and their parents — turn their backs on her son, Elly Henderson said.

“People would say, ‘Don’t worry, it will be a bigger setting, with tons of kids. The probability of making friends will be higher because there’s more people,’” Elly Henderson said. “It actually got harder.”

But it also marked a time of personal growth. He began to gain new talents and interests. He picked up the guitar. He started running cross-country. He joined the school choir and auditioned for a school play.

This happened in part because he really did enjoy all of these activities, and takes pride in being well-rounded. It also became his method to connect with people in a way he understood.

“I don’t really feel comfortable in large, packed spaces,” Henderson said. “But I do feel comfortable being able to go up to someone and ask them a question ... I’ve tried my best to have those kind of connections with people.”

Slipping through the cracks

Elly Henderson is proud of how far her son has come, and is thankful for the people who helped him along the way.

But she also feels like most people have a lot to learn when it comes to understanding the realities of high-functioning autism. She hopes by talking about her experience publicly, more parents and children will resist rushing to judgment about Asperger’s syndrome.

“I think we need to make sure we are not letting kids who are in the high-functioning zone slip through the cracks,” Elly Henderson said.

As Sam prepares for college, he’s not entirely sure what to expect. He sees his condition as a blessing and a curse that he will always have to live with, but has a complicated relationship continuing any kind of accommodations.

“The major reason is because it’s not something that I earned. I take great pride in skills and accomplishments and traits that I’ve earned in my life through diligence and practice,” he said. “I want people to think of me as a skilled person because I’m a skilled person ... not because of (Asperger’s).”

He knows there are challenges in learning a whole new place with brand new social situations.

But there is one aspect of college he knows he’s excited about: the quiet streets of Salt Lake City.

“With the curfews out there, you can walk around the streets around 7 p.m. and barely anyone will be out,” Henderson said. “And I love it for that.”