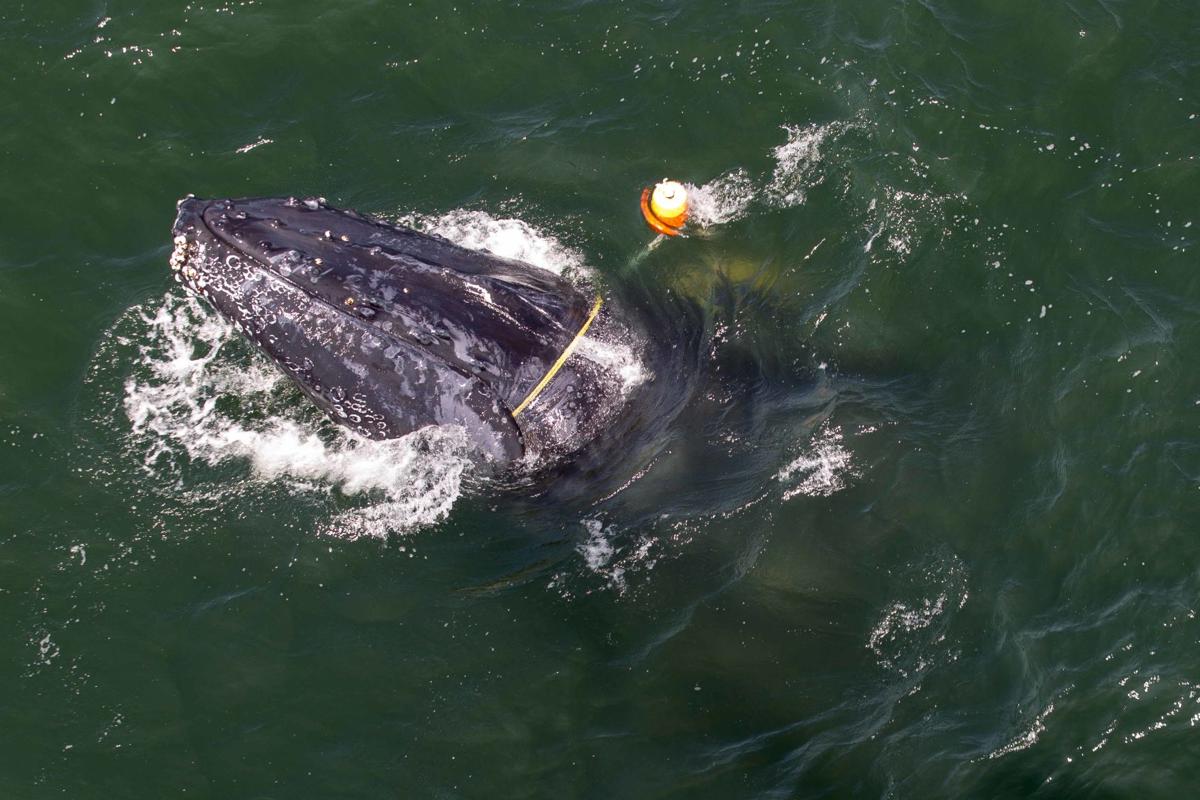 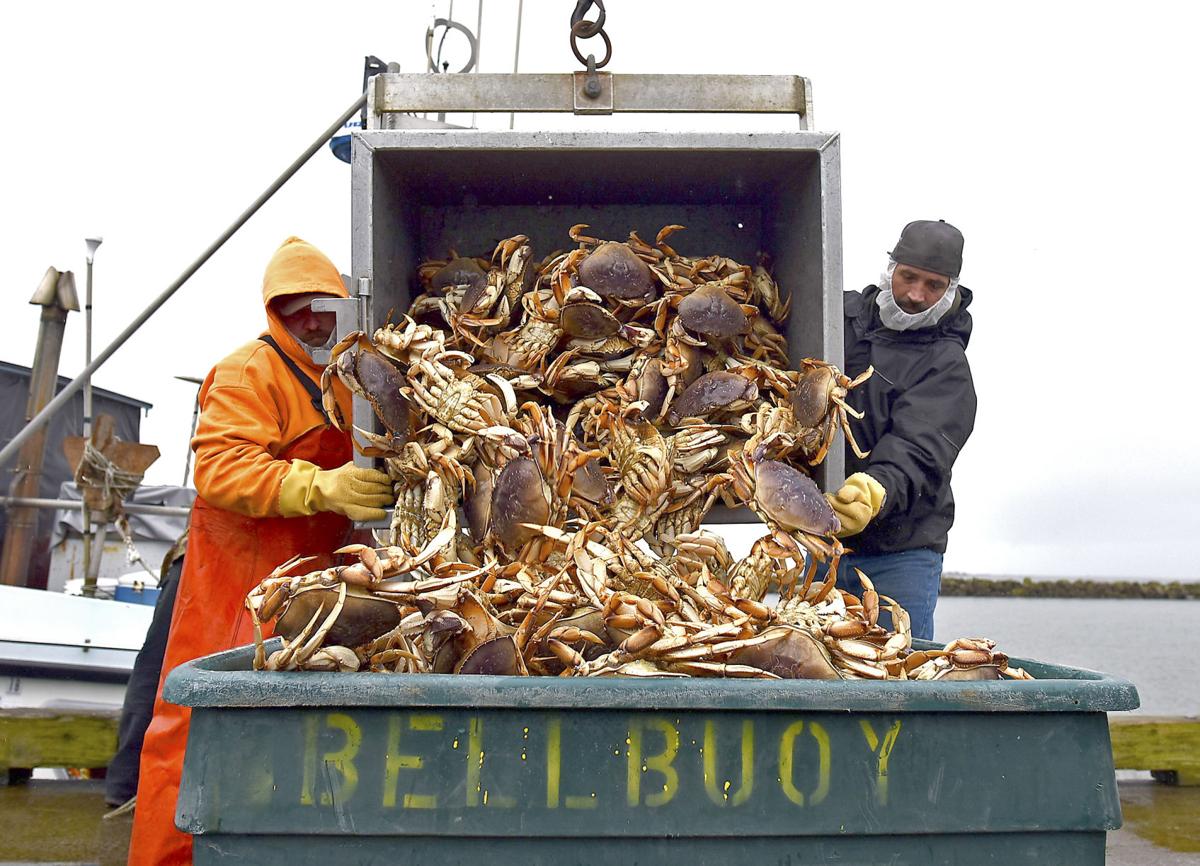 Workers from Bell Buoy Crab Co. offload at the Port of Chinook. Gear from Washington state boats has been found tangled around whales. 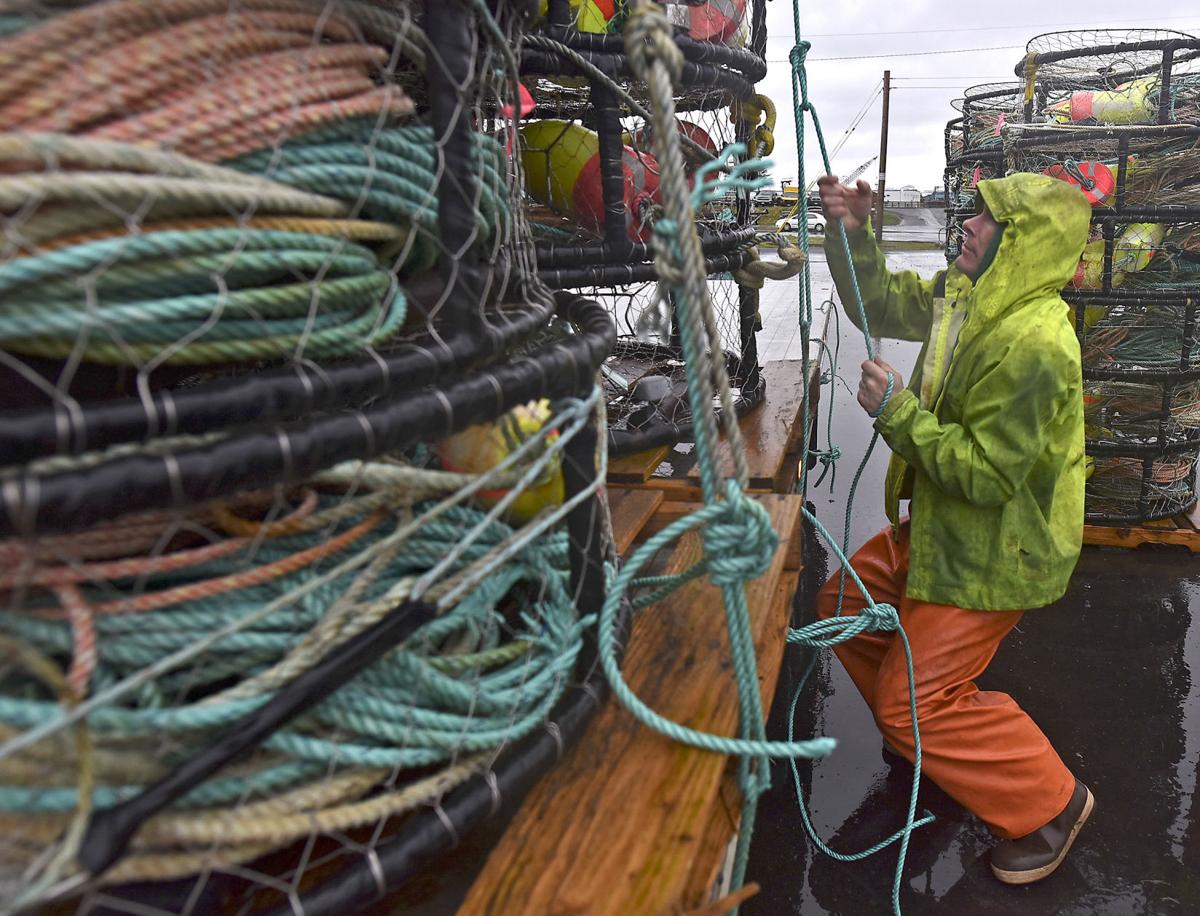 Amos Johnson ties crab pots down to a trailer before they are taken to a fishing vessel at the start of crab season at the Warrenton Marina.

Oregon fishery managers are changing how the state’s lucrative Dungeness crab fishery will be managed to avoid tangling whales in commercial fishing gear.

Though the changes happening this season are relatively minor for commercial fishermen, difficult discussions are on the horizon.

The number of whales entangled so far this year off Oregon, Washington state and California appears to be down compared to prior years, according to preliminary reports. But Oregon wants to avoid a lawsuit like the one brought against California by the Center for Biological Diversity. That lawsuit, over impacts to whales from commercial fishing activities, settled in March.

For now, fishery managers will eliminate a two-week postseason cleanup period in the commercial Dungeness fishery — a grace period for fishermen to clear gear out of the water. Instead, all commercial gear must be out of the water by the last day of the season on Aug. 14.

The measure, along with others, including the introduction of new buoy tags to help better identify gear, were among a list of recommendations proposed by the Oregon Whale Entanglement Working Group. The stakeholder group, which includes fishermen and industry representatives as well as researchers and fishery managers, began meeting in 2017 following several years of record-high incidents of whale entanglement.

Oregon, Washington state and California manage Dungeness crab fisheries under a tri-state agreement and have been working separately and collaboratively on measures to reduce interactions between recreational and commercial crab fishing and whales.

The bulk of the whales found tangled in fishing gear on the West Coast are reported off California, but gear from all three states has been implicated.

‘OK to live with’

Pulling gear earlier than usual “is something everybody seems OK to live with,” said Clint Funderburg, vice president and director of the Oregon Coast Crab Association, a group of commercial fishermen that formed this year in response to the debate around crab gear and whales. “It’s something that’s doable.”

Other changes — such as gear modification or further limiting entry into the fishery — could be more contentious, he said.

In September, the Oregon Fish and Wildlife Commission will hear a regulatory package that includes accountability and informational measures and represents an effort to fill in some gaps.

Along with California and Washington state, Oregon has begun the process of applying for an incidental take permit from the federal government, a lengthy process that, if successful, would allow crab fishermen to lawfully take a small number of endangered whales each year in the course of fishing.

“But the hardest conversation is moving into what we do with our fishery in terms of lines that are in the water and making those count and reducing them where they don’t count,” Caren Braby, a marine resources program manager for the state, told the whale entanglement working group at a meeting last week.

A survey Oregon Sea Grant sent out to the state’s commercial fleet revealed a mix of opinions on management measures. No one action elicited universal support.

“Instead we have a divided fleet,” Braby said during a presentation to the Fish and Wildlife Commission in June. “We have a lot of dissension about what would be effective, what the fleet could live with and how to move forward.”

For Funderburg and other fishermen, even if they switch between fisheries, crabbing continues to be a major moneymaker.

“Without it we wouldn’t survive,” he said.

“The state’s been good working with fishermen,” Funderburg said. “I think they understand we need to come up with something that keeps us in existence. We’re such an important part of the coastal economies and these small communities.”

At a meeting in June, Fish and Wildlife Commissioner Bruce Buckmaster, of Astoria, asked if staff was confident the measures they were recommending would stave off a lawsuit similar to what was seen in California.

“It does matter that we have this threat of lawsuit, but it doesn’t matter,” Braby replied, “and what we really need to focus on is doing the right thing for the whales and the crab fishery and that will set our course.”

Entanglement numbers for large whales like humpbacks and gray whales skyrocketed for four straight years beginning in 2014. Forty-six whales were confirmed entangled off the Oregon, Washington state and California coasts in 2018, the majority of them humpbacks, according to a federal report released in June.

Last year’s numbers were slightly lower than the historic highs seen in 2015 and 2016, “but still represent a concerning level and a large increase compared to pre-2014 levels when the average was less than 10 confirmed entanglements per year,” the report found.

Researchers and fishery managers are looking at how fishing could be adjusted so that the most effort is happening at times when there appear to be fewer whales around.

Leigh Torres, a researcher with Oregon State University and a member of the working group, launched a study to answer questions about when whales are off the Oregon Coast, why, what oceanographic conditions may come into play, how many are humpbacks that are part of stocks listed under the Endangered Species Act and, ultimately, how fishermen can avoid whales.

“The ultimate goal is to provide these layers of entanglement risk,” Torres said.

Torres and her team fly onCoast Guard helicopters four times a month, looking for whales. They collect data on where they see whales, but also where they don’t. This summer and next summer, Torres hopes that when they do see whales, they’ll be able to launch boats to take photos to identify individual animals and take tissue samples.

What it all ultimately means for commercial crabbers remains to be seen.

Fishermen don’t like to see whale entanglements, said Tim Novotny, a spokesman for the Oregon Dungeness Crab Commission. Besides, “from a purely business standpoint, it’s not cost-effective.”

Whale entanglement is not something the industry can ignore. If the problem is not addressed and whale entanglement issues continue or worsen, fishermen run the risk of “somebody else telling you how to operate your season,” Novotny said. “Another thing you don’t want.”

The crab commission provided some initial funding for Torres’ study and has kicked in money to help cover the costs of new, double-sided tags for the fleet — examples of the commission “putting its money where its mouth is,” said Hugh Link, the executive director.