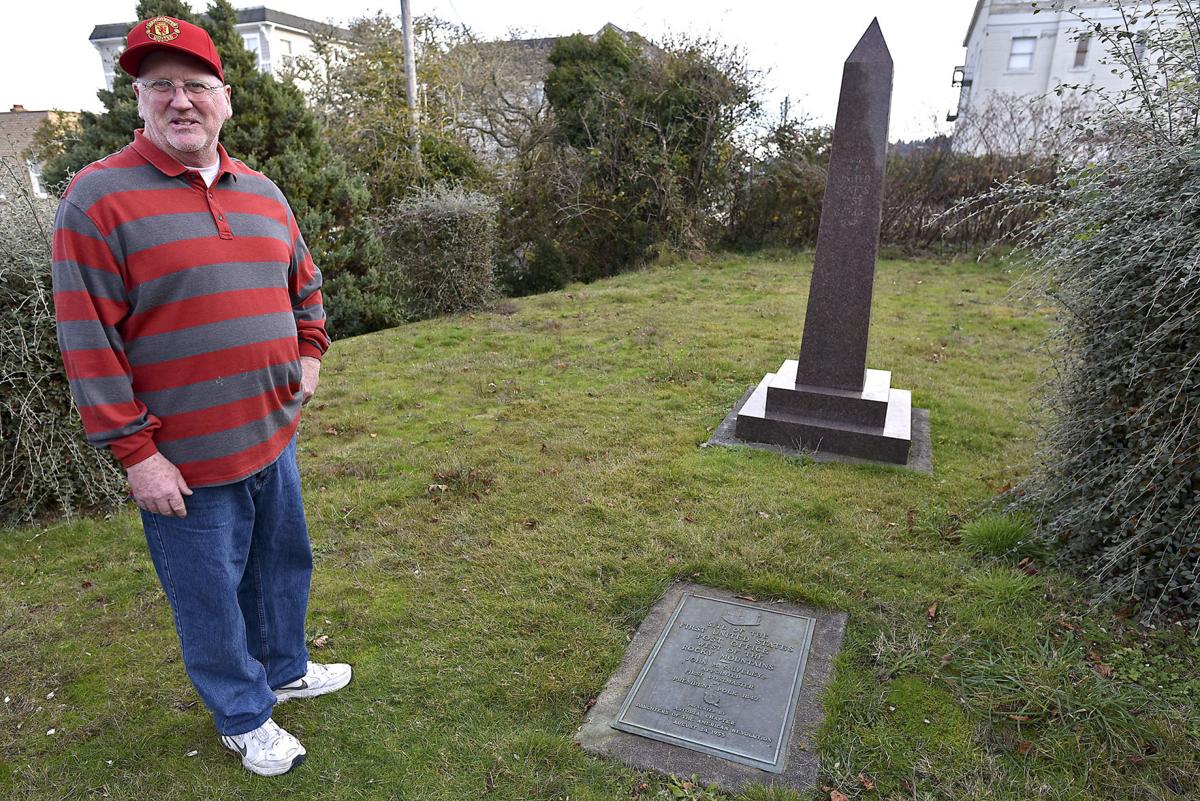 David Armstrong surveys Post Office Park, a tiny park located behind the bed-and-breakfast he and his wife run on 15th and Franklin. The couple plans to take over maintenance of the park to make it more attractive. 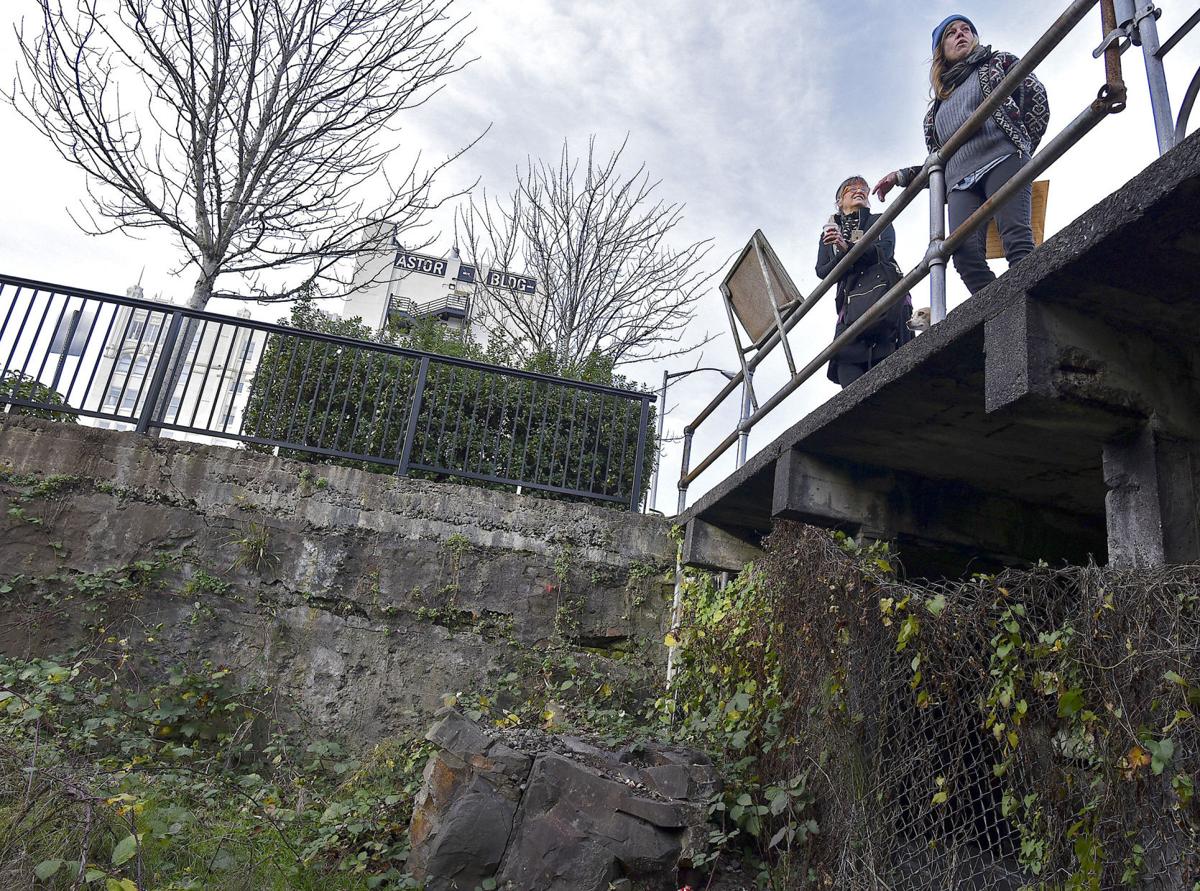 Artists Agnes Field and Jessica Schlief look down at Tidal Rock Park off Marine Drive. They hope to adopt the park for a year, clean it up and create an art installation. 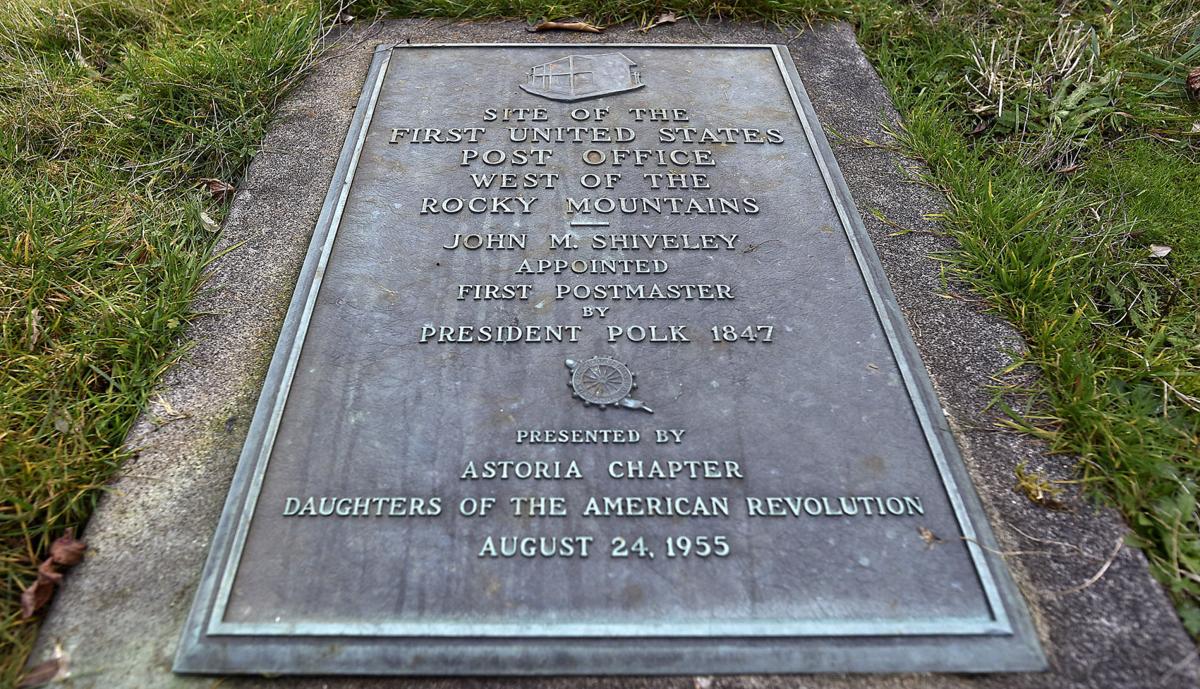 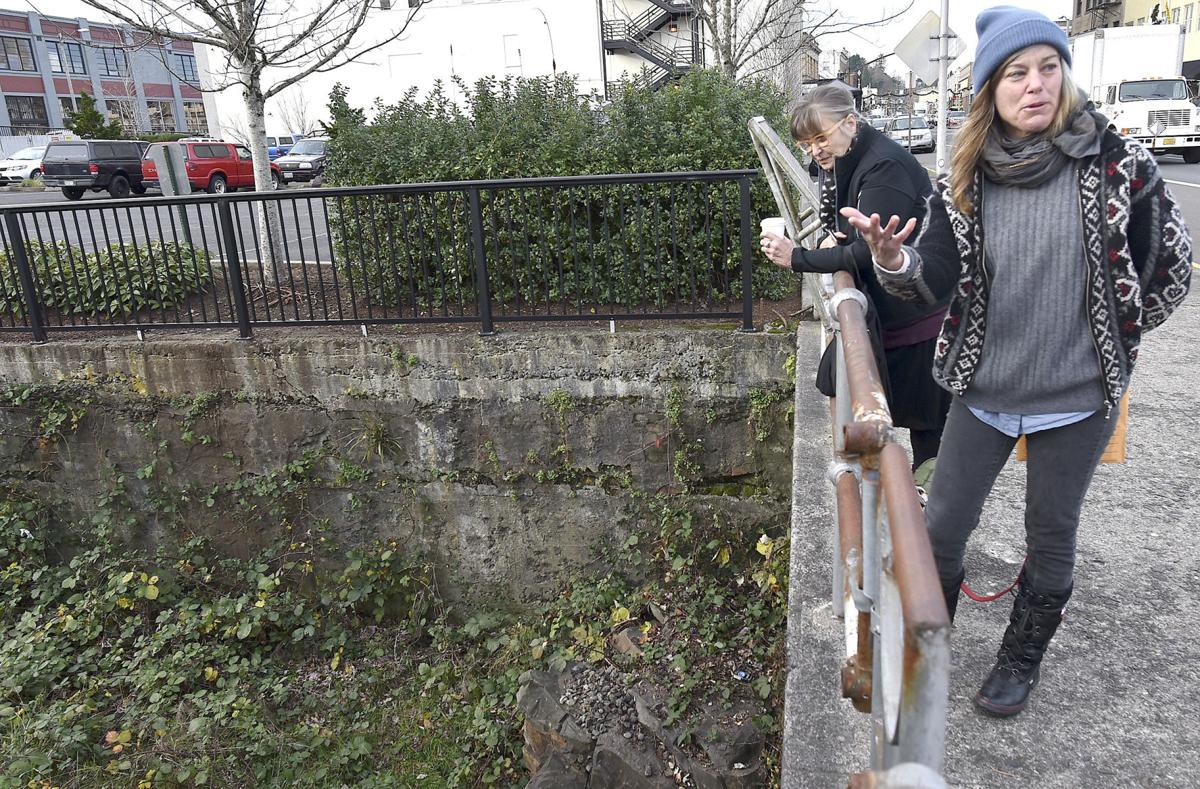 David Armstrong surveys Post Office Park, a tiny park located behind the bed-and-breakfast he and his wife run on 15th and Franklin. The couple plans to take over maintenance of the park to make it more attractive.

Artists Agnes Field and Jessica Schlief look down at Tidal Rock Park off Marine Drive. They hope to adopt the park for a year, clean it up and create an art installation.

People always ask who is buried in the tiny park behind Rose River Inn Bed and Breakfast.

The answer is no one. But there is a plaque in the ground and the place does look a little haunted, joke inn owners Pam and David Armstrong, eying the grounds of Post Office Park while their Chihuahua sniffs at a pile of deer droppings almost as big as she is.

The park, a flash of green on 15th Street and Franklin Avenue, commemorates the site of the first post office west of the Rockies. It features the plaque, an obelisk and a loose border of bushes in dire need of a trim. On Monday, the Armstrongs finalized an agreement with the city to take over maintenance.

Even a site this small can be a challenge for the bare-bones staff of the Astoria Parks and Recreation Department, said Angela Cosby, the department’s director. The agreement with the Armstrongs was one of several park adoptions the City Council considered at a meeting Monday night, and represents a groundswell of interest in parks that encourages Cosby.

Parks like Astor Park at the Astoria Column or McClure Park have “friends of” groups attached to them that advocate for the sites and help maintain the grounds. The parks department also has an agreement with Holiday Inn for maintenance of the Maritime Memorial Park under the Astoria Bridge.

“Those have slowly evolved over the past 10 years or so,” Cosby said. Park adoptions are not a frequent occurrence, “so having four (park adoptions) come forward all at once is wonderful.”

Each of the adoptions is slightly different. The one for Post Office Park or another still under discussion for the long-neglected Tidal Rock Park down the hill are more typical, Cosby said. Others have been in the works for years.

The creation of a Scandinavian Heritage Park at the site of the Peoples Park off Marine Drive, for instance, had long been discussed and dissected. Like a park adoption in Alderbrook by the Clatsop County Master Gardeners, the Scandinavian Heritage Park is not a straightforward agreement focused around maintenance. Instead, these are more complex, long-term agreements between entities that will change the appearance and use of the sites in the coming years.

The Clatsop County Master Gardeners hope to expand their educational offerings by creating a garden in Alderbrook Park at 45th Street and Lief Erikson Drive where members can learn how to grow a variety of plants for food. The group has outgrown a garden space at the Clatsop County fairgrounds. Alderbook Park would provide important visibility and accessibility, said Debbie Haugsten, the group’s president. Food grown in the garden will be donated to food banks. The garden itself will be open to the public as a demonstration garden.

“Our mission is outreach to the community and we didn’t really have a space to do any outreach or education about growing produce in our area,” said Linda Jones, assistant to the master gardeners program, adding, “The possibilities are endless when you have a space like that.”

Located below street level off Marine Drive and 15th Street, Tidal Rock is a park hiding in plain sight. Trash clings to blackberry brambles like ornaments. The rock that gives the park its name is barely visible in the northwest corner. Historians believe mariners used the rock to judge the depth of the water when the Columbia River still flowed in the area that became downtown.

“I would love to be able to put artists’ hands in this park,” Schleif said.

The artists’ hopes include a massive cleanup and a temporary mixed-media art installation that will draw inspiration from natural and historic sources and in which community collaboration will be key. Their plans jump-started a discussion on how the city endorses art and what it should and shouldn’t allow. The council will weigh an agreement at a future meeting.

There are downsides to park adoptions. Putting together agreements and working with groups interested in park adoption can eat up staff time, Cosby said. If the park adoptions don’t end up working out, the city will have to redirect and pick up the pieces.

“That’s a risk you take with any project,” Cosby said. In her opinion, the pros far outweigh the cons.

Even small parks can be a challenge to maintain. To have volunteers step up and take over maintenance needs frees up park staff for other tasks.

“It lightens the burden on our department,” Cosby said. “It allows us to focus energies on other parks as well.”

Park adoptions also allow city residents to get their hands dirty in a park for a year and really take ownership of an area.

“Just that sense of community and people rallying together to achieve something,” Cosby said.

She hopes to set a goal in the future of several park adoptions each year.