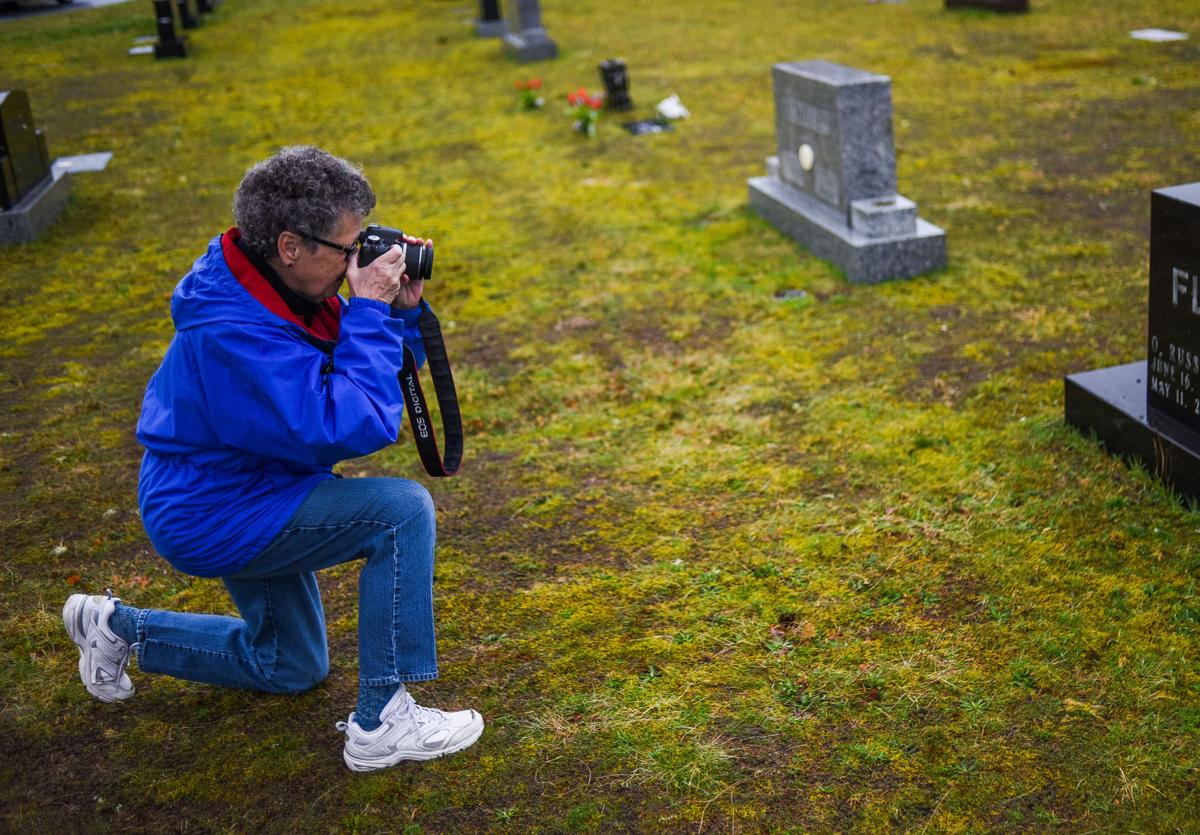 Judy Bearman demonstrates how she photographs headstones for the Find A Grave website on Wednesday at Ocean View Cemetery in Warrenton. 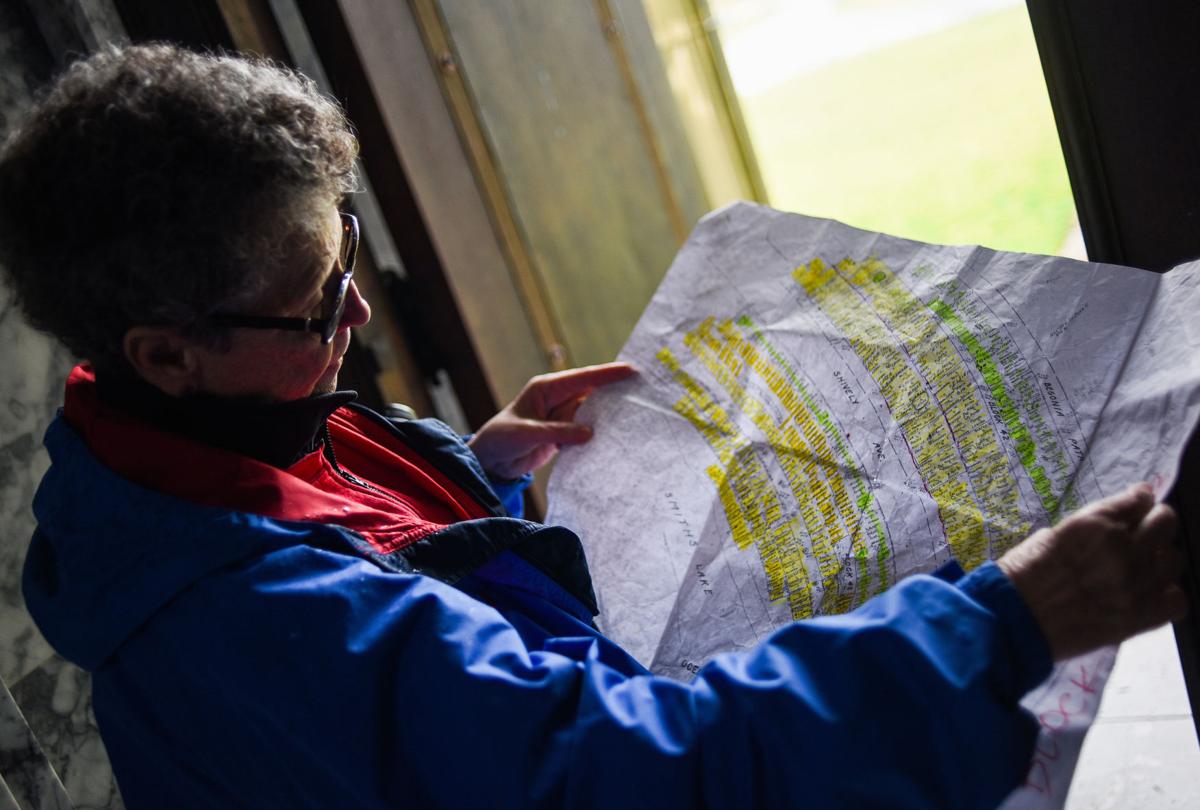 Judy Bearman looks at a map of the Ocean View Cemetery in Warrenton where she has been working on her Find A Grave project creating a digital database for all the headstones in the cemetery. 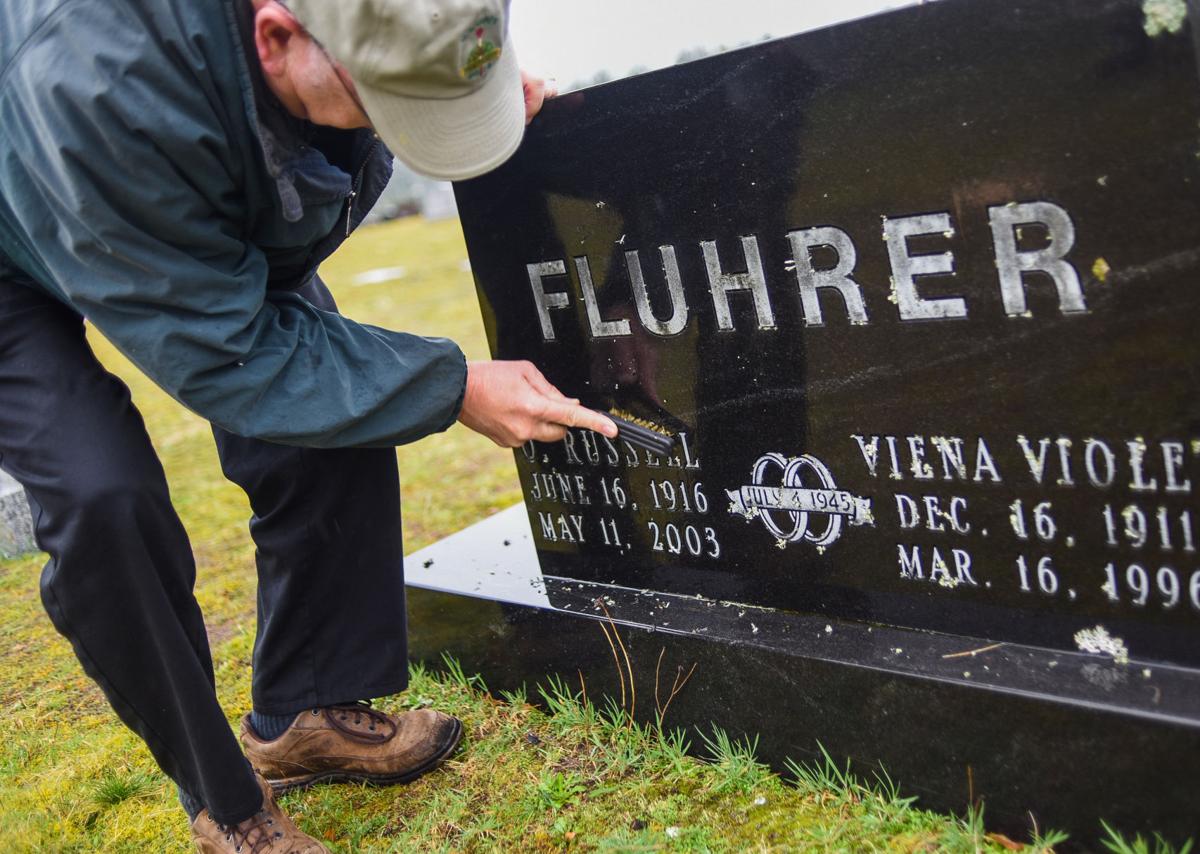 Thomas Bearman demonstrates how he cleans the moss off headstones before his wife Judy Bearman photographs the headstone for the Find A Grave website Wednesday at Ocean View Cemetery in Warrenton. 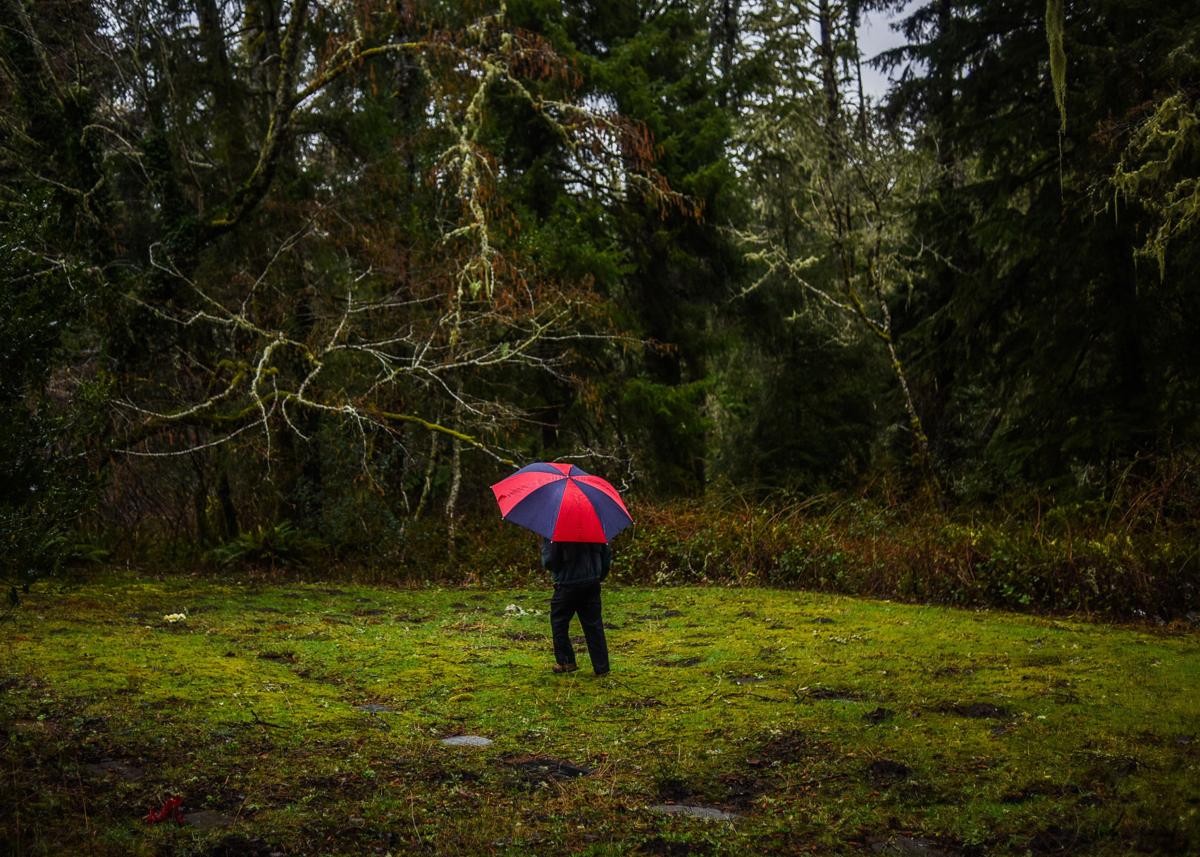 Thomas Bearman surveys an older section of Ocean View Cemetery where they will be working next to archive and photograph headstones buried underground. 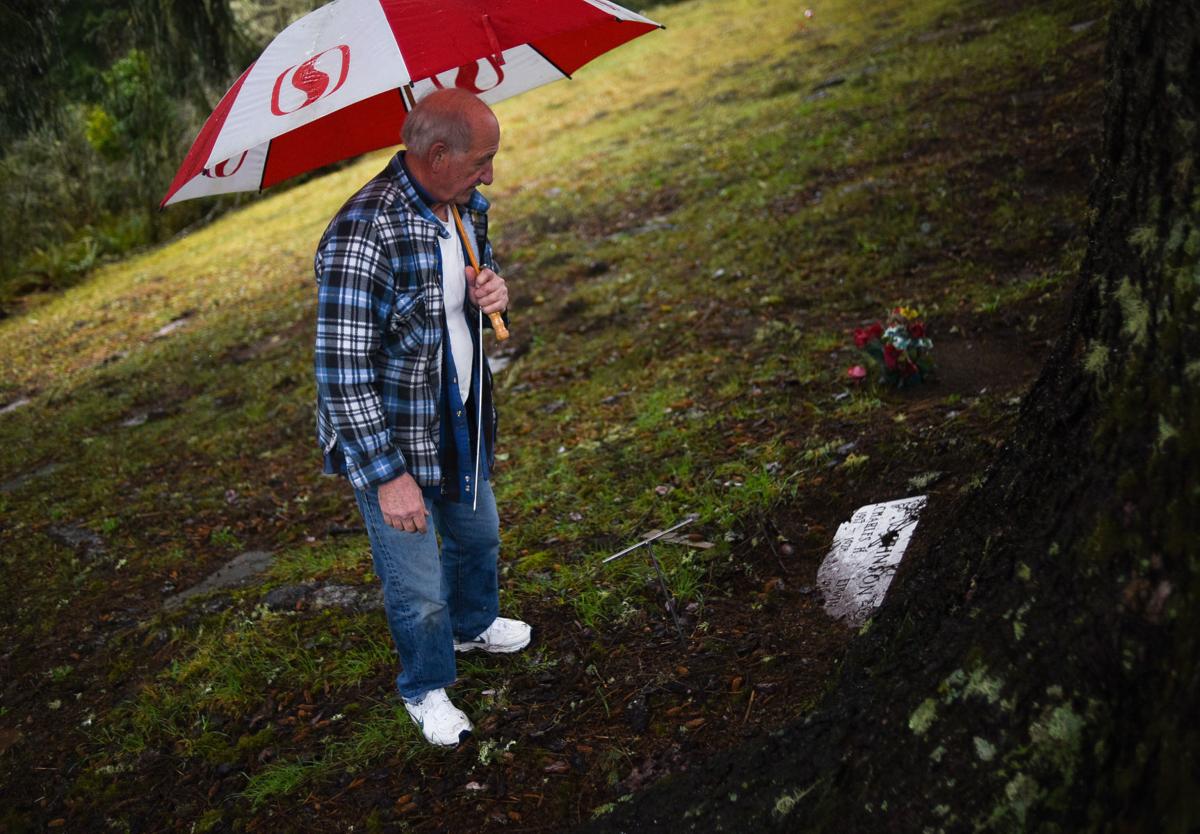 Carl Hagnas, who volunteers his time, looks at an older section of the cemetery where he will be doing future work to uncover buried headstones.

Judy Bearman demonstrates how she photographs headstones for the Find A Grave website on Wednesday at Ocean View Cemetery in Warrenton.

Judy Bearman looks at a map of the Ocean View Cemetery in Warrenton where she has been working on her Find A Grave project creating a digital database for all the headstones in the cemetery.

Thomas Bearman demonstrates how he cleans the moss off headstones before his wife Judy Bearman photographs the headstone for the Find A Grave website Wednesday at Ocean View Cemetery in Warrenton.

Thomas Bearman surveys an older section of Ocean View Cemetery where they will be working next to archive and photograph headstones buried underground.

Carl Hagnas, who volunteers his time, looks at an older section of the cemetery where he will be doing future work to uncover buried headstones.

WARRENTON — Roughly 16,000 people lie buried at Ocean View Cemetery, a vast, sweeping necropolis overlooking Cemetery Lake and the distant Pacific. And now it is easier for their family and friends to find pictures of the deceased’s tombstones online.

Judy Bearman, of Warrenton, recently finished taking photos of every visible gravestone and posting the images on Find A Grave, a free website that allows users to add pics, identify burial locations and contribute biographical information.

The project, which she took over from a church group, spanned more than a year. Bearman would venture into the cemetery on days with agreeable weather, tidy up the tombstones, photograph 100 to 150, edit the images and upload them to the website. Her husband, Thomas, later joined her.

She gave digital copies to Astoria, which owns and manages the cemetery.

In all, Judy Bearman took more than 11,000 photos and created almost 10,000 Find A Grave “memorials,” website pages devoted to individual interments. In many cases, more than one body lies beneath a headstone, so some memorials feature the same photo. Though some memorials for Ocean View burials already existed, most didn’t have photos until Bearman added them.

Now every stone at Ocean View has been photographed. “We have checked and double-checked,” she said.

The city’s parks staff gave Bearman access to burial records stored in the chapel atop the cemetery. “Without that, I probably would’ve given up on the project,” she said.

In addition, the parks department’s online Ocean View Cemetery map and catalogue, which she called a “lifesaver,” helped her fill in the gaps, like names on the oldest grave markers that had become illegible. “There was a lot of detective work to it,” she said.

The city keeps a digital database and hard-copy records of burials, but, before Bearman came along, had no documentation of on-the-ground pictures of Ocean View Cemetery. “So it’s a pretty significant amount of information that she’s gathered,” Jonah Dart-McLean, Astoria’s parks maintenance supervisor, said.

Users can notify Bearman through Find a Grave if she made an error entering information and needs to correct it. “When you’re talking 11,000 stones, you’re going to make a mistake sometime,” she said.

Thomas Bearman has relatives buried at Ocean View, including his grandparents Charles Bearman (1887 to 1967) and Anna Bearman (1886 to 1960), both of who emigrated from Finland and met in Astoria. “That’s how the family got started over here,” Thomas Bearman said.

He said he enjoyed working with Judy on the Find A Grave project, and doing what they could for those who have passed on. “It just felt like I was doing them a service,” he said.

Judy Bearman, a geological enthusiast originally from Raymond, Washington, connected with Find A Grave years ago when she traced her ancestry from England and Germany.

She said the Ocean View Cemetery project acquired a spiritual aspect as she moved among the old headstones. She felt connected to the history, and became increasingly interested in the lives beneath her feet — and the circumstances of their death.

“Sometimes I could find an obituary, and it just made them so real,” she said.

Find A Grave, a valuable resource for genealogists, helped her piece together the stories of the deceased.

“Every little bit is a clue,” she said. “Sometimes we would just linger over a grave and try to imagine what happened here.”

A family of four from Astoria, Bearman noticed, died on the same day. She Googled them, and discovered in a Daily Astorian article that they had all died in a house fire.

Now, the Bearmans are helping the city uncover hidden graves in Block 38 on the cemetery’s sloping east side.

In that section of the 118-year-old cemetery, some tombstones have shifted and sunk into the sandy soil, or have become overrun with weeds, moss and debris. The Bearmans and their friend, Carl Hagnas of Warrenton, are working to locate these graves using cemetery records and a rod that can probe deeply into the earth.

An associate of one famous Astoria family that has relatives interred at Ocean View, but that no longer lives in the area, was unhappy that Bearman posted a photo of the family’s tombstone. They contacted Bearman to express their displeasure, even though her photo was clearly superior to the existing one.

But, in general, the families have been kind about it and appreciate her work.

“It turned out to be just this fantastic experience because I kept meeting people out there who had stories to tell,” she said.

One day, early on in the project, Bearman was at the cemetery alone, taking photos down by Cemetery Lake and saw an older gentleman sitting on the ground and scraping moss off a headstone. She could tell he was “turning something over in his heart,” she said.

She kept taking pictures around him, moving closer and closer, but trying not to disturb him. Finally, she approached him.

“And I said, ‘Excuse me, but I just want to thank you for taking the time to clean off your family’s stone,” she said, observing that there are many stones in the cemetery that nobody does that for.

“And he says, ‘Well, actually it’s not family.’ And I said, ‘Oh,’” Bearman remembered. “He says, ‘Yeah … Fishing season opened the other day, and this is my fishing buddy. And I really miss him.’”

Bearman saw two little flowers in his hand and almost cried. “He was just sitting there, probably remembering fun fishing trips,” she said.

She convinced him to allow her to take a picture of his hand over his friend’s gravestone — a picture she plans to add to Find a Grave.

See the Ocean View Cemetery listings on Find a Grave at http://bit.ly/2my50uV