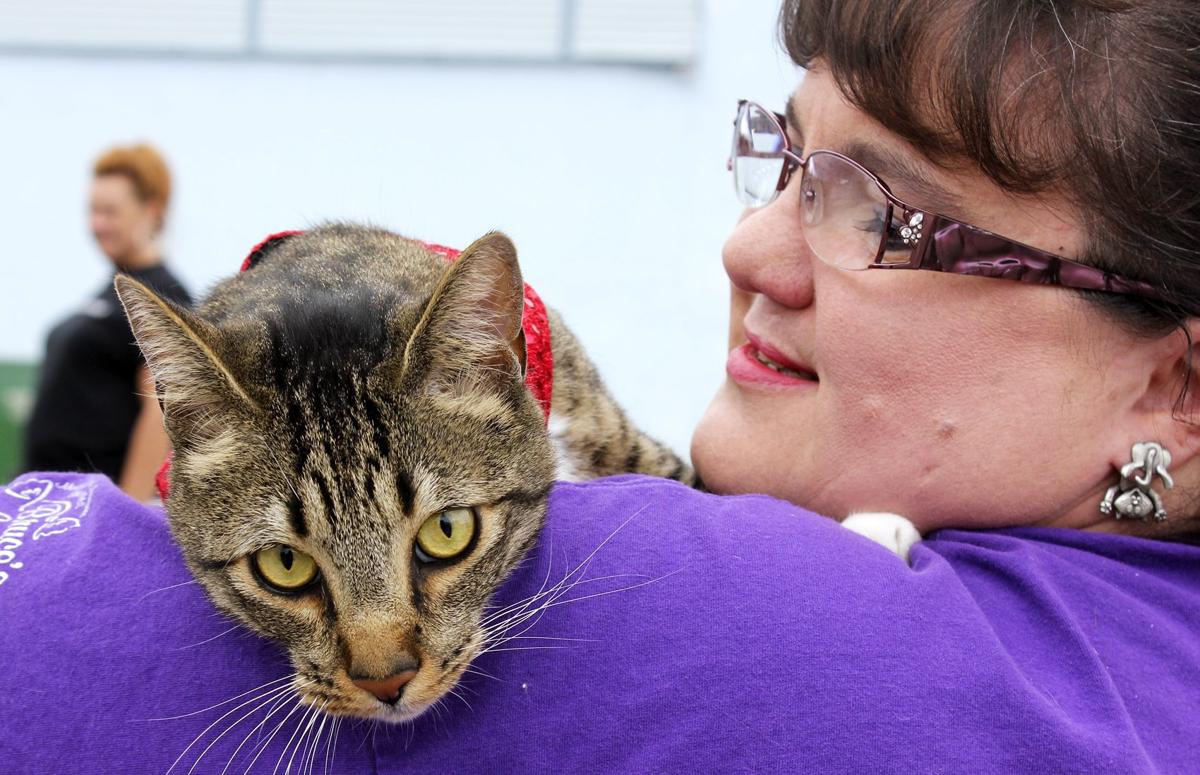 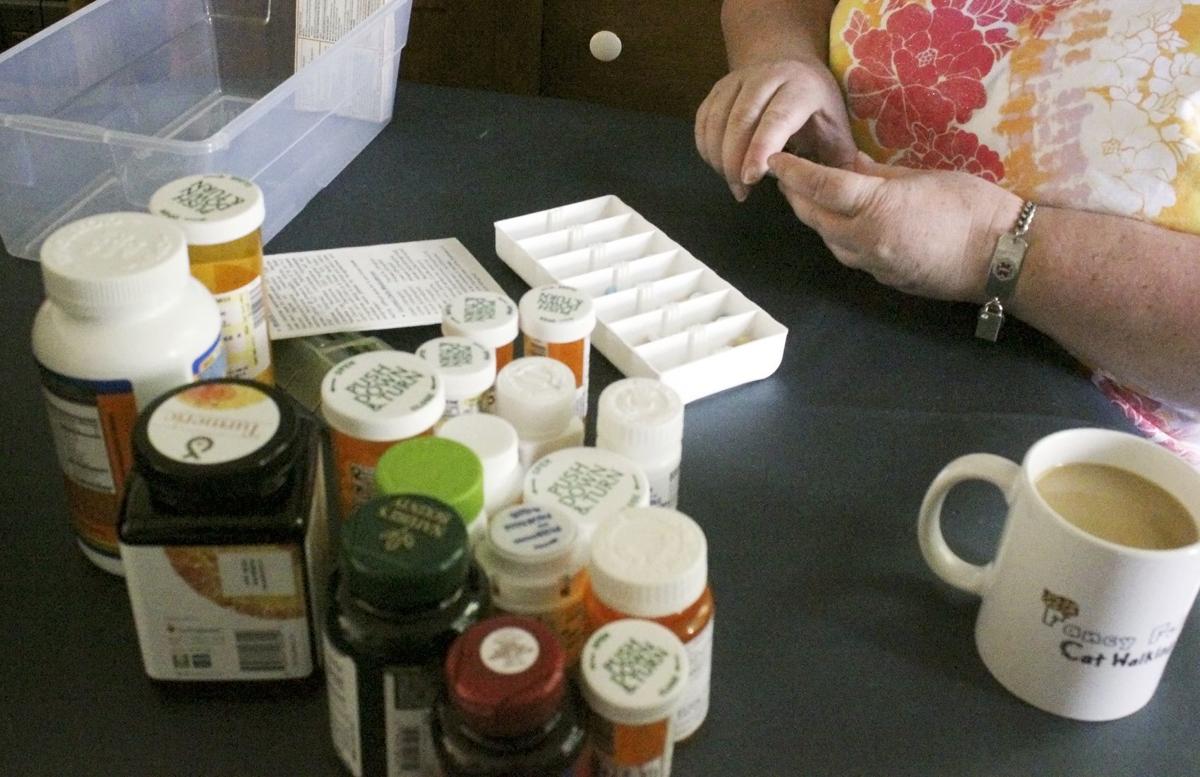 Teresa Bennett takes about 27 different pills each day to manage the symptoms of her rare medical condition known as Dercum's disease. 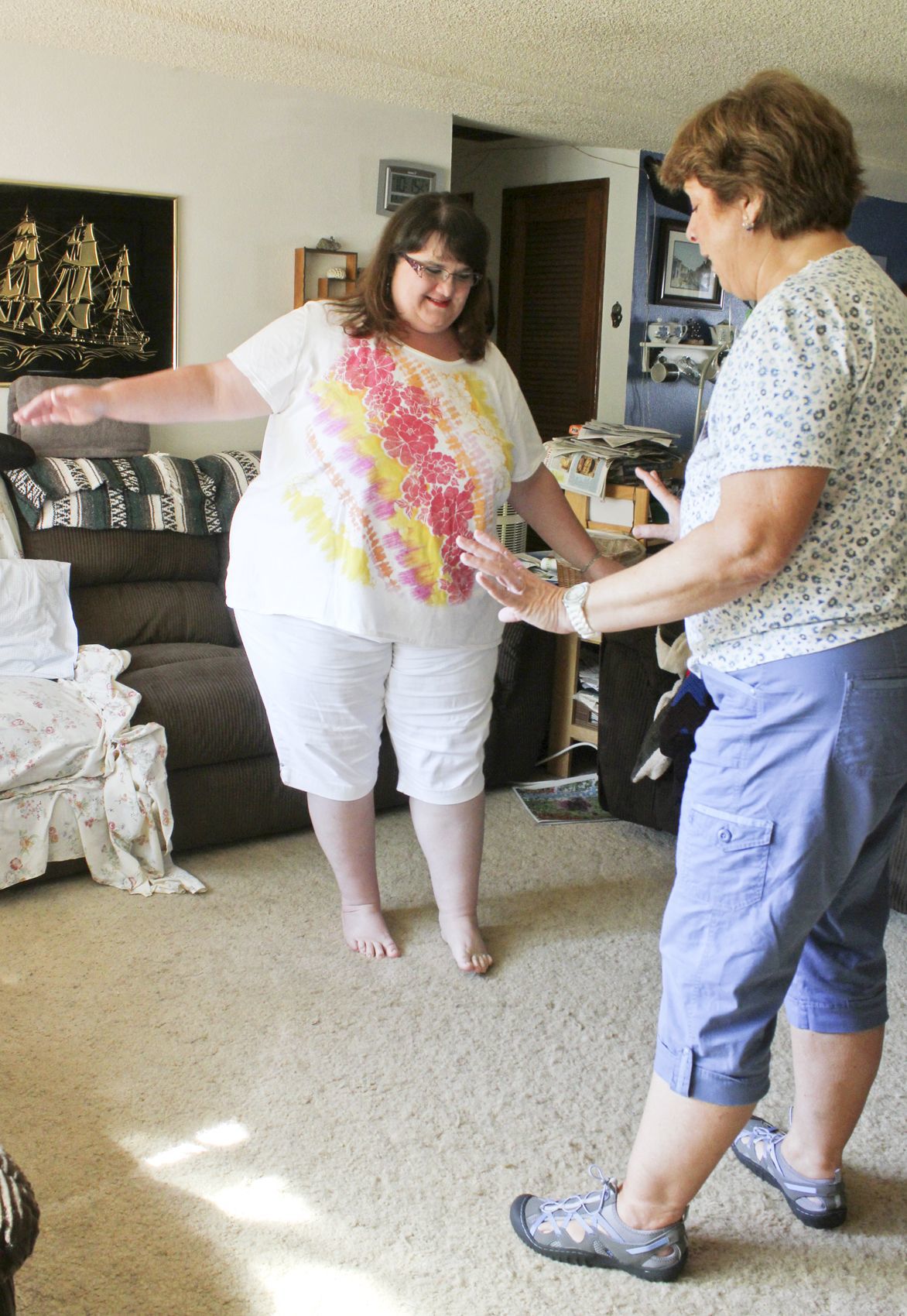 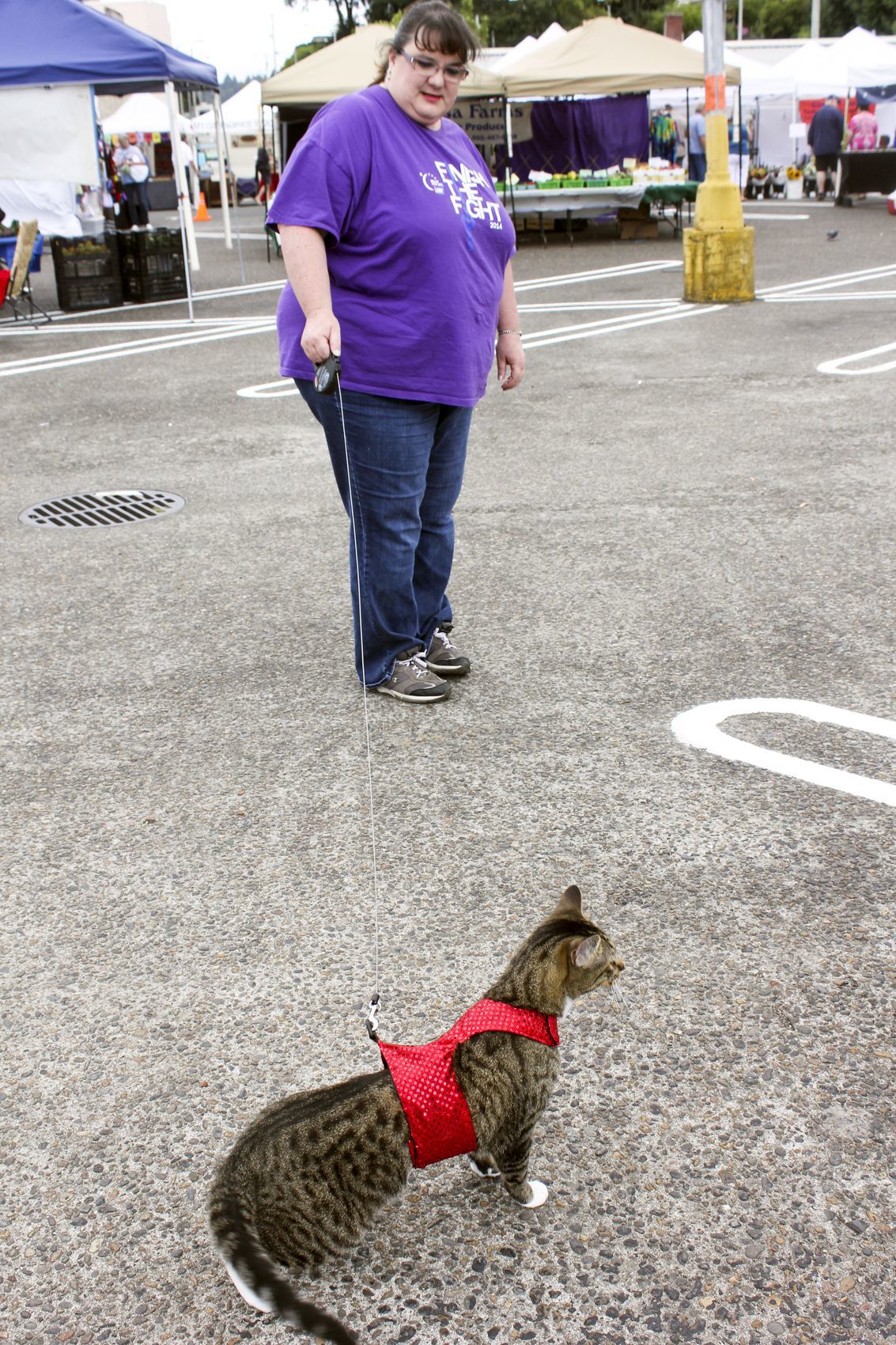 Oliver, a 4-year-old cat, walks through the Astoria Sunday Market on his specialty harness, made by Teresa Bennett. The harness was designed with help from veterinarian Dr. Larry Goza and does not hurt or choke the cats, but is secure enough to hold them.

Teresa Bennett takes about 27 different pills each day to manage the symptoms of her rare medical condition known as Dercum's disease.

Oliver, a 4-year-old cat, walks through the Astoria Sunday Market on his specialty harness, made by Teresa Bennett. The harness was designed with help from veterinarian Dr. Larry Goza and does not hurt or choke the cats, but is secure enough to hold them.

At the Dog Day Afternoon fashion show, it may have been a little out of the ordinary to see a cat participating, especially when that cat is on a leash or in a stroller.

Bennett has been fighting assumptions her whole life. She struggles with obesity as the most obvious symptom of her rare medical condition.

Even her mother, Karen Elder, of Knappa, did not believe her at first, thinking all she needed was a healthier diet. One doctor told her to “Put the fork down.”

Adiposis dolorosa, casually known as Dercum’s disease, is one of the most painful diseases known to physicians. Very few doctors know about the condition and even fewer are doing research on it. Karen Herbst, an endocrinologist in Tuscon, Ariz., is hailed among many with Dercum’s as a saving grace.

Bennett’s primary doctor is Tony Leonardo, who is a physician’s assistant at Wimahl Family Clinic. He said he had never heard of this condition before meeting Bennett. Though he is the one Bennett sees most consistently, he said she is good at seeking more help if she needs it.

“She finds providers who can help her and she takes care of it. She doesn’t feel sorry for herself.”

Elder said her daughter was “skinny as a rail” in middle school. When puberty hit, she began gaining noticeable weight.

One trait of Dercum’s is it takes fat tissue and alters it into small lipomas, like tumors, symmetrically around the body. These are masses heavier than normal fat, and they grow “in real time.”

“When one starts to grow, it feels like a bee sting,” Bennett said.

“That’s how I know when there’s a new one. Soon it feels like a pea, and a week later it’s the size of a marble.”

The reason they hurt is because they each have nerves and blood vessels.

“My doctor quit counting when he got past 100,” Bennett said.

She describes Dercum’s as an opportunistic disease. When the body is ailed by anything else, the Dercum’s will take hold. Simple inflammation causes it to worsen overnight.

“I went through flare-up after flare-up,” she said.

“At the care center, they weigh you every day, and once I gained 10 pounds overnight.”

Dercum’s is considered terminal and comes in four stages. First, the lipomas take over the fat tissue. Next they begin forming in other tissues. Bennett, now 45, is in the third stage, where the lipomas have begun growing on and between her bones. Last, they will find her vital organs.

Though not as much research has been done on Dercum’s as other conditions, many who have received this diagnosis find comfort on forums where they can compare notes. Through this they found similarities: there is a genetic link, mostly women are affected, most have had early hysterectomies and most are hit harder after early menopause.

This makes sense to Bennett. She said her father’s side of the family all died young and all were similarly overweight. Bennett’s diagnosis did not come until seven years after her father died in a plane crash in 2000. He was the last living on that side of her family.

Bennett’s family trouble did not begin there, though. She was married in her early 20s, but the couple struggled with infertility.

“We had to go to counseling because with the medication I was on, there was no way we would end up with less than triplets,” she said.

After the stress and heartache of never getting pregnant, the relationship turned abusive. Bennett left in 1995 when her husband began using drugs and cheating on her.

Shortly after that, Bennett began work as a nurse. It was a career she loved but was soon unable to perform what the job required. She was forced to quit and apply for disability.

For more than three years, Bennett lived with no income. It took U.S. Sen. Betsy Johnson, a lawyer and federal court for her condition to be officially recognized. Her mother has also been a huge support.

Bennett’s other support in all of this came one late night.

“I couldn’t sleep and I started to hear this crying outside,” Bennett said.

She rushed out to find a tiny kitten covered in another animal’s saliva and took him in. The cat, Oliver, would grow into a large breed known as a Bengal.

Bennett had lost other pets to wild animals and was determined not to lose her new companion. She wanted Oliver to be able to go outdoors but found that harnesses marketed for cats were easy for them to escape. Bennett set out to make a harness of her own.

In collaboration with her veterinarian, Dr. Larry Goza, she designed an effective jacket that attaches with Velcro and will only release if caught. Cats can even be picked up by the jacket without harming or choking them.

She sews and sells them on the website she designed, Fancy Feline Fashions. Last year she had her own booth at the Sunday Market and she planned to work this summer, too, when her health collapsed in April.

She was rushed to Oregon Health and Science University Hospital where she was treated for pneumonia, but her cough persisted. Another visit to the hospital confirmed her lungs had collapsed. Combined with her allergies, asthma, pacemaker and Dercum’s, doctors described her as “the perfect storm.”

After a long stay in the hospital, she was transferred to a nursing facility to rehabilitate. One night there, she called a friend in desperation.

“She called me up at 10 p.m. She just needed to get out and she doesn’t ask for anything.”

Bennett just needed a dose of Oliver. Ledgerwood drove two hours to the Portland nursing facility to bring Bennett back to Astoria for a day visit.

After being released from the nursing facility, she began staying with her mother, where she is until next week when she plans to move home. Her physical therapist, Marcia Fenske assured her she was ready.

Bennett’s recovery hasn’t yet allowed her to sew again, but she hopes to be back in action by October. Eventually she said she wants to take Oliver, who is Clatsop County’s first registered companion cat, around to local nursing facilities.

See the cat harnesses at www.fancyfelinefashions.com