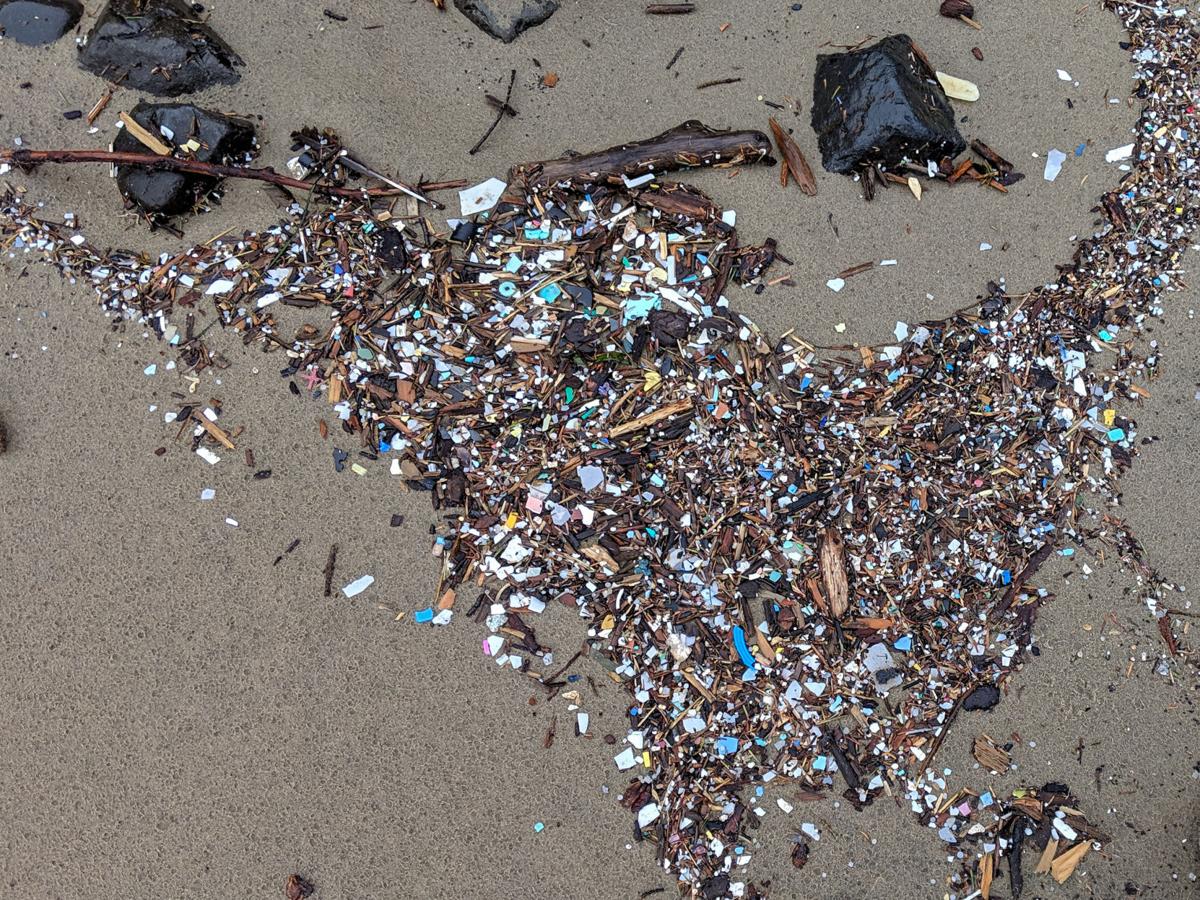 Tiny bits of plastic litter the sand at a beach in Ecola State Park near Cannon Beach. 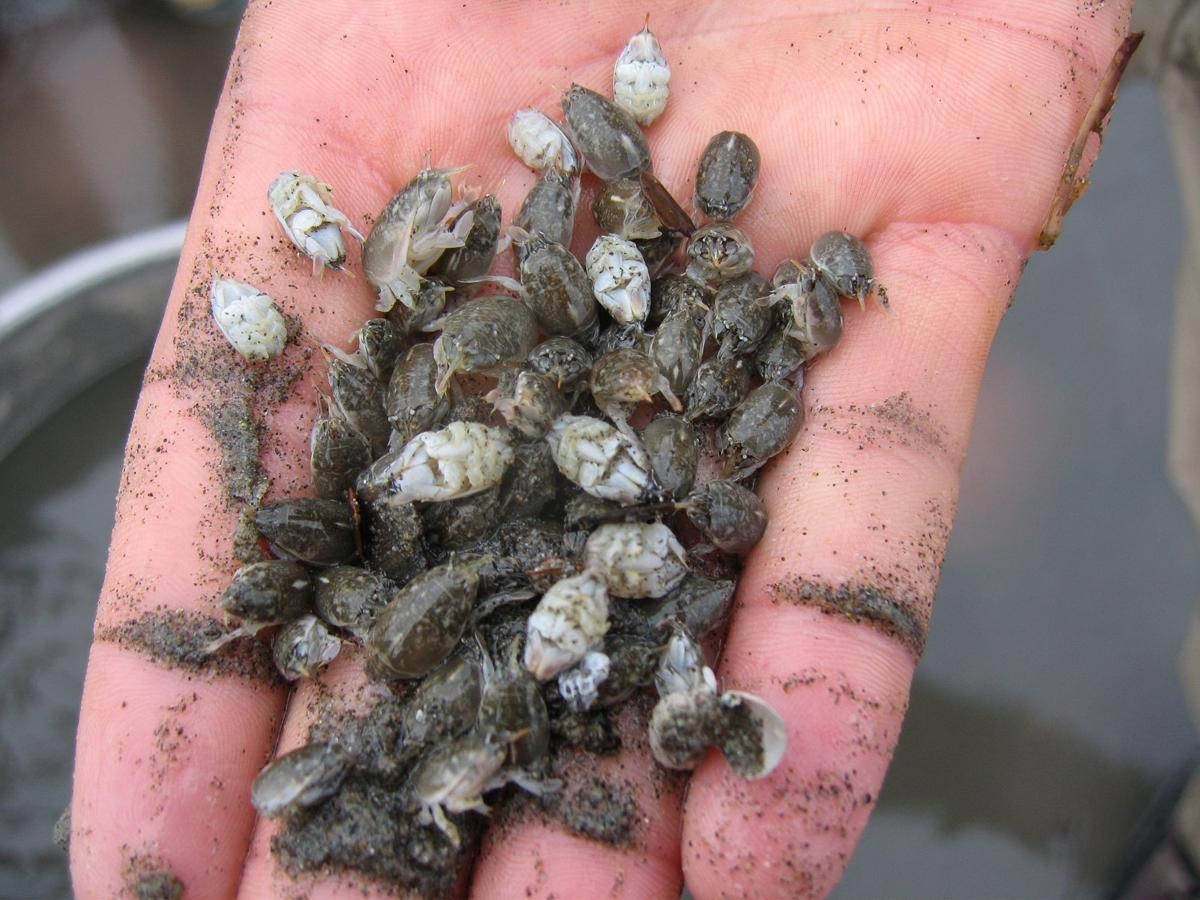 A new study finds Pacific sand crabs, also known as mole crabs, are impacted by microplastics in the sand. 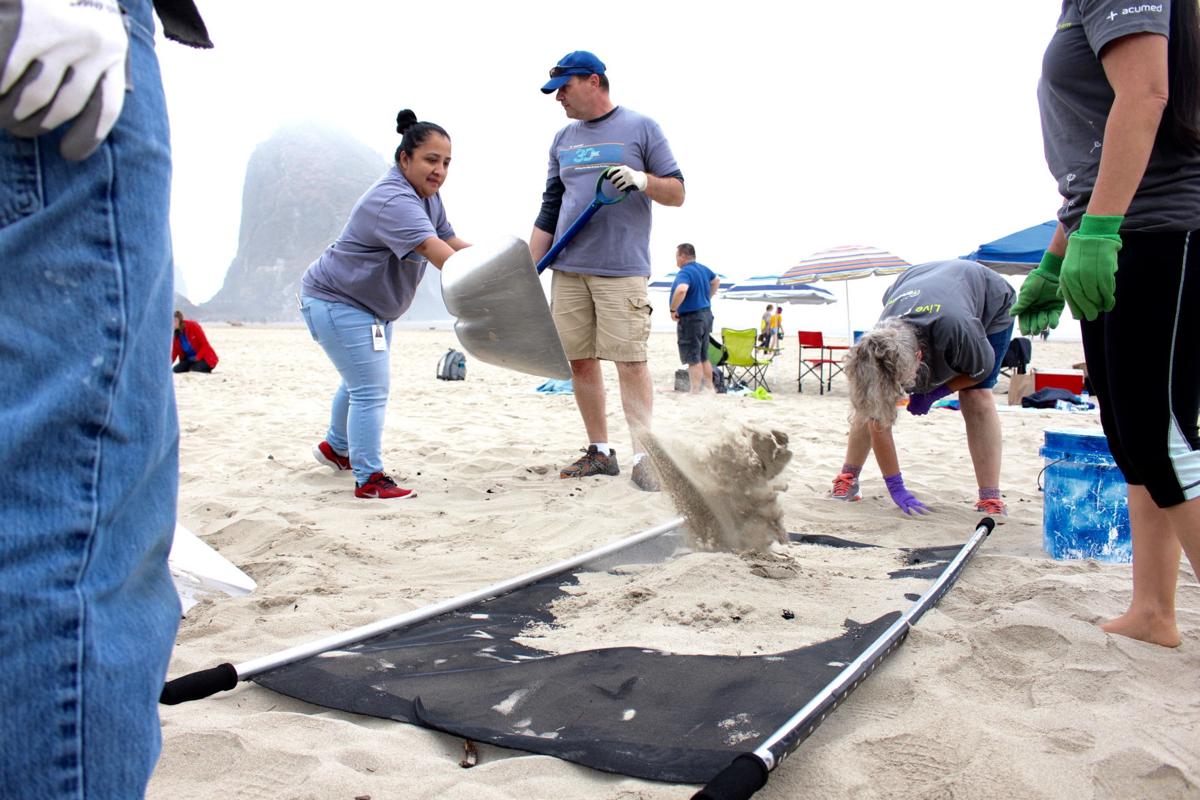 Heidi Perez scoops sand through a microplastic filter during a beach cleanup event in Cannon Beach in 2018 with her Acumed co-workers Rick Lauricella and Karen Krueger.

While North Coast residents are increasingly aware that microplastics are a problem, what the pollution means for wildlife isn’t always clear.

But a type of plastic fiber now commonly found on Oregon’s beaches may have a big impact on the life cycle of Pacific sand crabs, according to a recent study.

The study found that adult Pacific sand crabs, also called mole crabs, exposed in a lab to pieces of plastic fiber died sooner than those that were not exposed. If a crab was carrying a clutch of eggs when exposed, it released the eggs prematurely. For embryos, exposure to the plastic either sped up their development or slowed it down, depending on when they were exposed.

Small, numerous and, at first glance, unremarkable, mole crabs are a “bright, blinking light” for whether or not there’s a problem in an area, said Dorothy Horn, lead author of the study and a doctoral candidate in Portland State University’s earth, environment and society program.

Horn collected sand samples from 19 beaches in Oregon and mole crabs in Newport. Each sand sample contained some amount of microplastic fibers and particles. Though researchers exposed the crabs in the lab to a specific type of plastic fiber commonly found in marine environments and ingested by a variety of animals, Horn says it is safe to assume the crabs were already dealing with, and eating, a variety of plastic out on the beach.

Mole crabs are a sort of indicator species, whose presence or absence can tell researchers a lot about conditions in an area. They have been used to look for the presence of domoic acid, a naturally occurring marine toxin that can shut down popular razor clam fisheries and lucrative Dungeness fisheries if levels spike too high.

“I think people forget the beach is alive in a lot of ways,” Horn said. “It’s not just a pile of sand.”

Mole crabs, she says, remind us there is a whole ecosystem alive between the rocks and the crashing ocean.

Despite the findings documented in the study, how much of a problem plastics are for mole crabs ultimately remains to be seen.

The crabs are a familiar sight to any beachcomber in Clatsop County. But with many popular beaches considered “sinks” for microplastics — surveys of beaches in Fort Stevens State Park estimate as many as 11,000 pieces of plastic per square meter, compared to other Oregon Coast beaches that sit at roughly 800 per square meter — plastic pollution has been a part of the crabs’ environment for a long time.

Mole crabs live for only a year or two. With such short life spans, quick adaptation may be possible. Studies of other animals have found certain fish species are more likely to ingest plastic when in different life stages, and some creatures seem to be unfazed by plastic, eating it and passing it without issues.

“We’re looking at things now, but maybe they’ve adapted in some way and we just missed that part,” Horn said.

And there are other issues besides plastic pollution that could take a toll on the crabs, the organisms they eat and the animals that, in turn, eat them.

Along with other shelled organisms in oceans and coastal estuaries around the world, mole crabs face the threat of ocean acidification, a change in ocean chemistry tied to increased carbon dioxide levels that makes it difficult for creatures like clams, crabs and oysters to build or maintain shells.

Ocean temperatures and salinity — factors that affect how quickly animals like mole crabs grow — are also in flux.

For now, local populations of mole crabs appear to be robust.

Every year, Matt Hunter, shellfish project leader with the Oregon Department of Fish and Wildlife, conducts razor clam population assessments on Clatsop beaches ahead of the popular digging season.

As he and his team pump the sand for clams, they also pull up mole crabs. In 2006, they decided to begin tracking the crab population as well — a kind of sidebar of data.

“In 2006, we had what we thought at the time were huge populations,” Hunter said.

“We’re really in the northern range for the mole crab so it’s certainly not alarming by any stretch of the imagination,” Hunter said of these numbers.

What he wants to know is if these cyclical ups and downs in the mole crab population can reveal anything about razor clam abundance. He wondered if large numbers of crabs burrowing in an area could displace young clams. The clams, unlike the mole crabs, have a commercial and recreational value.

Though, Hunter added, “ecologically, they all have value.”

While large pulses of crab numbers do seem to correspond with El Nino weather patterns, there doesn’t seem to be a clear link between the number of crabs and the number of clams.

“I’d wager, overall, environmental conditions play a much, much larger role than anything they might do upon each other,” Hunter said.

If it isn’t clear what happens to mole crabs in a plastic world, it is equally mysterious what happens to everything else if the mole crab population decreases or disappears. Mole crabs are an important source of food for seabirds, fish like surf perch and marine mammals, Horn noted.

She says the natural world can be a bit like the game Jenga, where players create a tower of stacked blocks and then take turns trying to remove as many blocks as they can without causing the tower to collapse.

“Sometimes you can pull a couple of pieces out and it seems like it’s OK,” Horn said. “But then you pull one more and the whole thing falls down.”