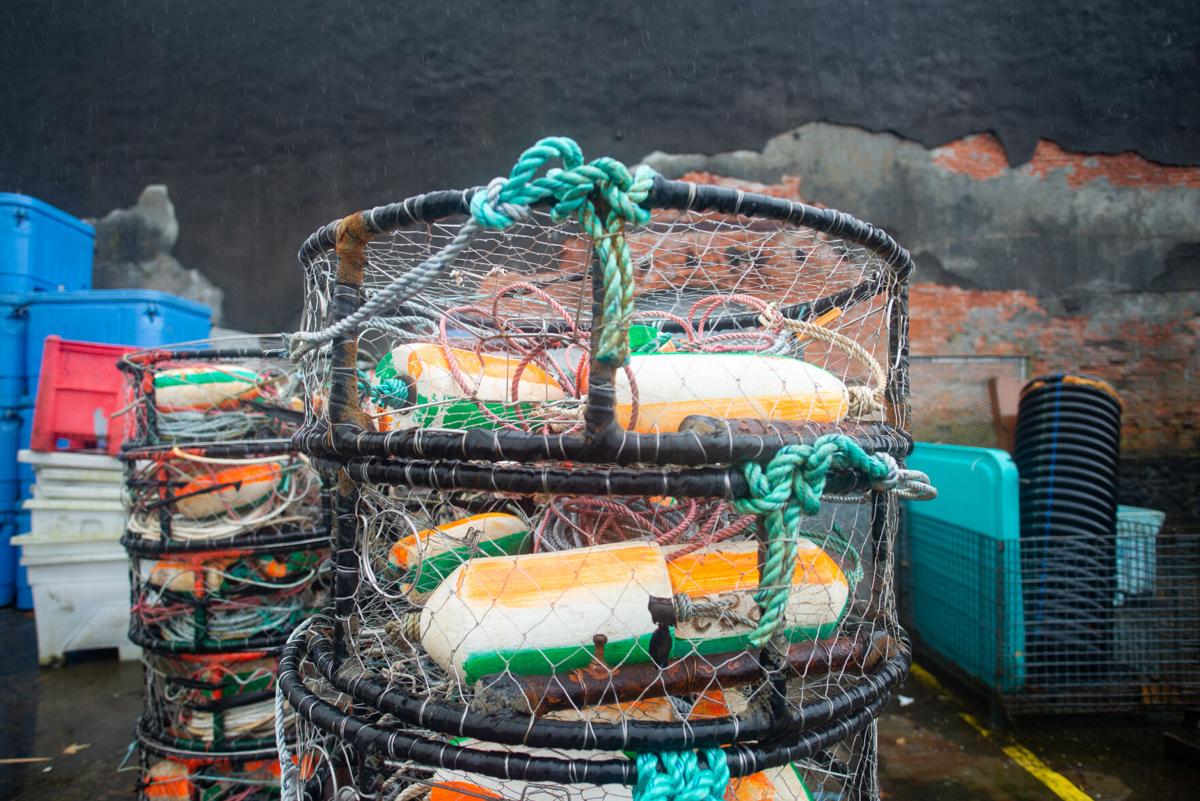 Empty crab pots sit at Fishhawk Fisheries. The opening of the commercial Dungeness crab fishery has been delayed by high levels of domoic acid. 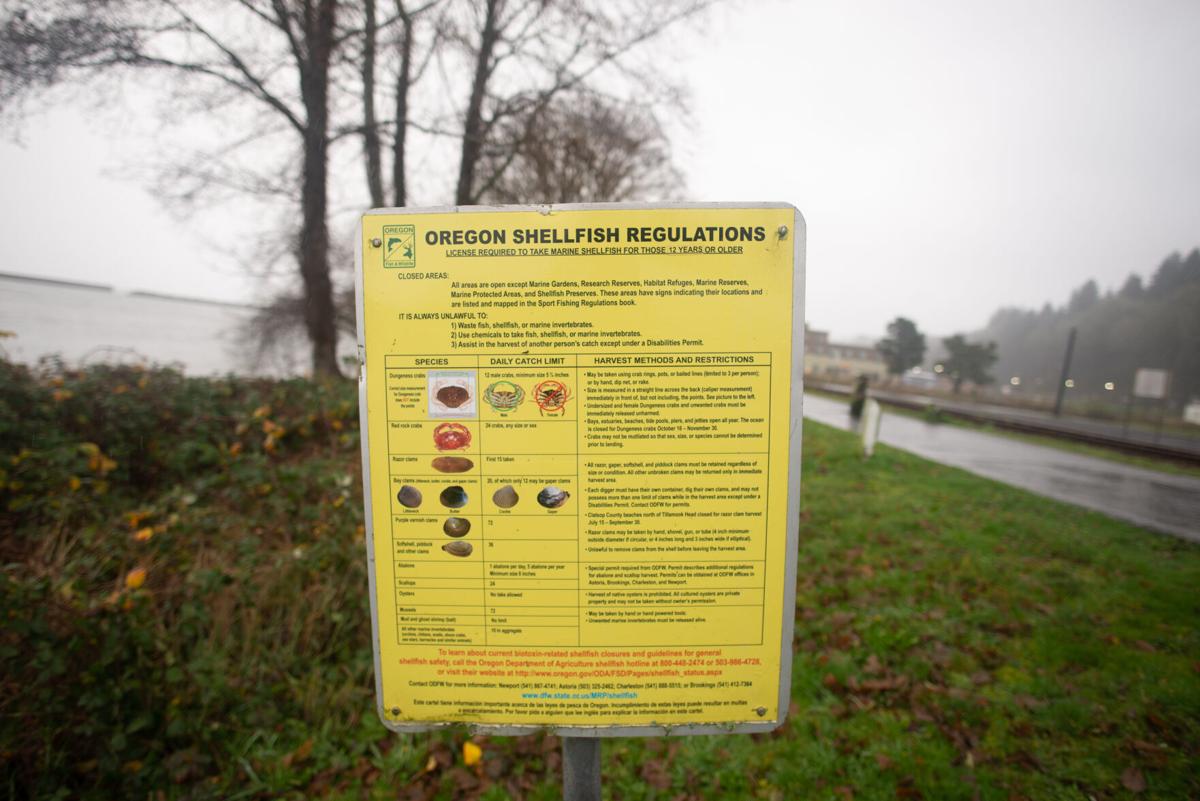 A sign regarding Oregon shellfish regulations and information to learn about biotoxin levels and closures is posted at the East Mooring Basin. 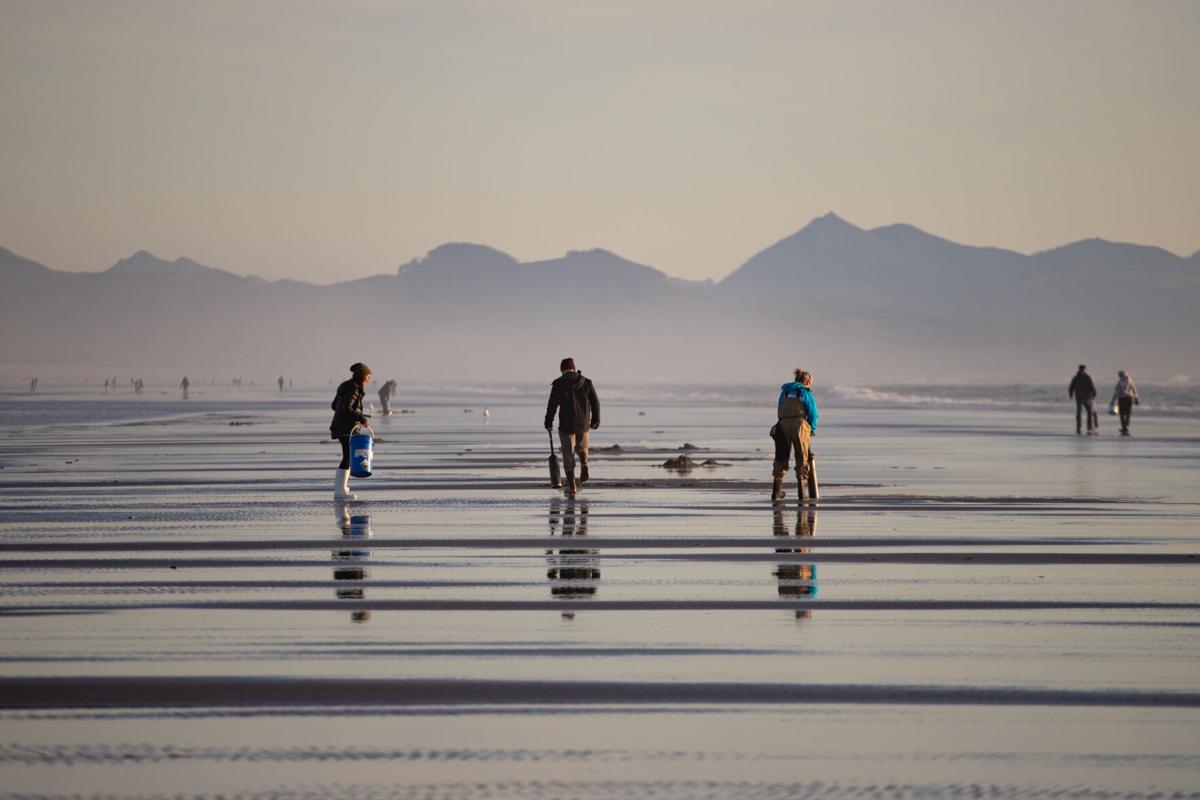 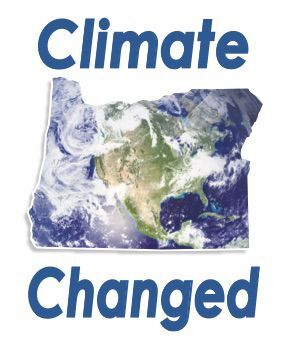 As high levels of domoic acid once again delay the opening of the commercial Dungeness crab fishery in Washington state and along Oregon’s North Coast, researchers say they have zeroed in on a like cause of marine toxin issues farther south.

The hot spot — along with another near Newport — and the seed bed of cells capable of producing domoic acid that it harbors, seems to be the reason spiking levels of the toxin continue to hamper the commercial Dungeness crab fishery and razor clam digs in Oregon and Washington this year.

The new hot spot emerged amid a perfect storm of factors that favored its development and persistence, in particular a marine heat wave that began in 2013 and continued for several years after. With the progression of many of the same factors under climate change, researchers say hot spots and the issues that accompany them are likely here to stay.

“Can they be washed away? We’re not seeing a lot of evidence for that,” said Vera Trainer, lead author of the study and an expert in harmful algae with the National Oceanic and Atmospheric Administration.

The 2013 heat wave set off disastrous chain reactions in the marine ecosystem, including a record-setting harmful algal bloom that closed or delayed fisheries in 2015. Fisheries managers and scientists are still watching the effects unspool.

Like the change in forage fish patterns and the delay in crab fishing during the heat wave that brought large migrating whales and fishing gear in direct conflict with each other, the new hot spot is another unforeseen result, another “unknown unknown,” Trainer said.

The researchers’ discovery confirmed what others had suspected.

Matthew Hunter, a study author and shellfish and phytoplankton lead for the Oregon Department of Fish and Wildlife, said there had been consistent domoic acid-related closures around razor clam digs in that area for nearly a decade — issues they weren’t seeing in the same way yet anywhere else.

While there is little comfort in finding out he was right about a spot being bad, it does allow for more targeted sampling, Hunter said.

The hot spot likely helped seed most of the Oregon Coast in 2015 and 2016. Now if fishery managers start seeing conditions align for a bad bloom, they know where to focus testing so they can plan ahead of fishery openers.

“By looking at them in the early season, we’ll be able to forecast what the blooms might be like in California or southern Oregon,” Hunter said.

Hot spots, or “retentive sites,” occur in nutrient-rich areas that because of a combination of currents and topography can create a haven to harbor high concentrations of cells. Ocean waves and currents then distribute the cells out.

Though cells were likely present in the area for a while, the new hot spot appears to have established itself more fully during the heat wave that began in 2013.

Pseudo-nitzschia, the algae capable of producing domoic acid, can remain dormant in sediments for years. But if algal cells come to the surface and temperatures are warm enough, they begin to multiply. They bloom.

Early warning and forecasting of blooms is becoming increasingly important, especially as harmful algal blooms appear to be happening off schedule.

Where fishery managers used to see issues in the spring, now they are seeing blooms in the fall and winter.

“What it really comes down to is we’re seeing more blooms,” Hunter said. “We’re seeing them at times we wouldn’t normally see them.”

“It’s a little alarming, a little concerning,” he added. “If we’re seeing these changes and we’re seeing more closures (as a result), eventually our current programs are going to get overwhelmed.”

For Trainer, the discovery of the new hot spot illustrated how impossible it is to draw a border at state boundaries. It emphasizes the need for cooperation among a variety of entities and individuals to understand the full picture.

When Pseudo-nitzschia produced the first recorded domoic acid bloom on the West Coast in the early 1990s, nobody knew what they were dealing with. Officials closed entire beaches.

Now, with a better understanding of how the blooms function and with refined sampling and testing, states are able to enact selective closures.

“We have selective closures because we’ve instilled confidence in the coastal managers that we know what is there,” Trainer said.

But Oregon’s sampling program that looks at what phytoplankton are in the water and if they’re beginning to produce domoic acid is federally funded. Money is expected to run out in 2022.

Washington state’s testing is on firmer ground, paid for with dedicated funds. Still, fishery managers rely on testing from Oregon to warn what might be coming up the coast. The testing becomes even more crucial if southern-based bloom events become more common, said Dan Ayres, coastal shellfish manager for the Washington Department of Fish and Wildlife.

State monitoring efforts warned the department this year that something bad was on its way.

Fishery managers closed razor clam digs during a tide series in October even though they didn’t have test results for domoic acid in yet. They knew it was about to change.

They stepped up on local sampling. When those samples came back, domoic acid levels were high, well above the threshold allowed by state health officials.

Ayres has seen a number of harmful algal blooms over the years. They seemed to happen in phases, often tied to usual, larger climate patterns like El Nino.

Though he is not ready to say for certain that what they are seeing now is directly linked to climate change, he does know some things have shifted.

Blooms used to flow mostly from a known hot spot to the north in the Strait of Juan De Fuca.

“We thought we had this pretty well wired,” Ayres said.

“There’s the old adage: Just when you think you know what you’re doing, Mother Nature throws a curve ball at you,” Ayres said. “We thought we had her figured out and, lo and behold, there’s a new wrinkle in the whole thing.

“We’re going to be dealing with this for a long time.”