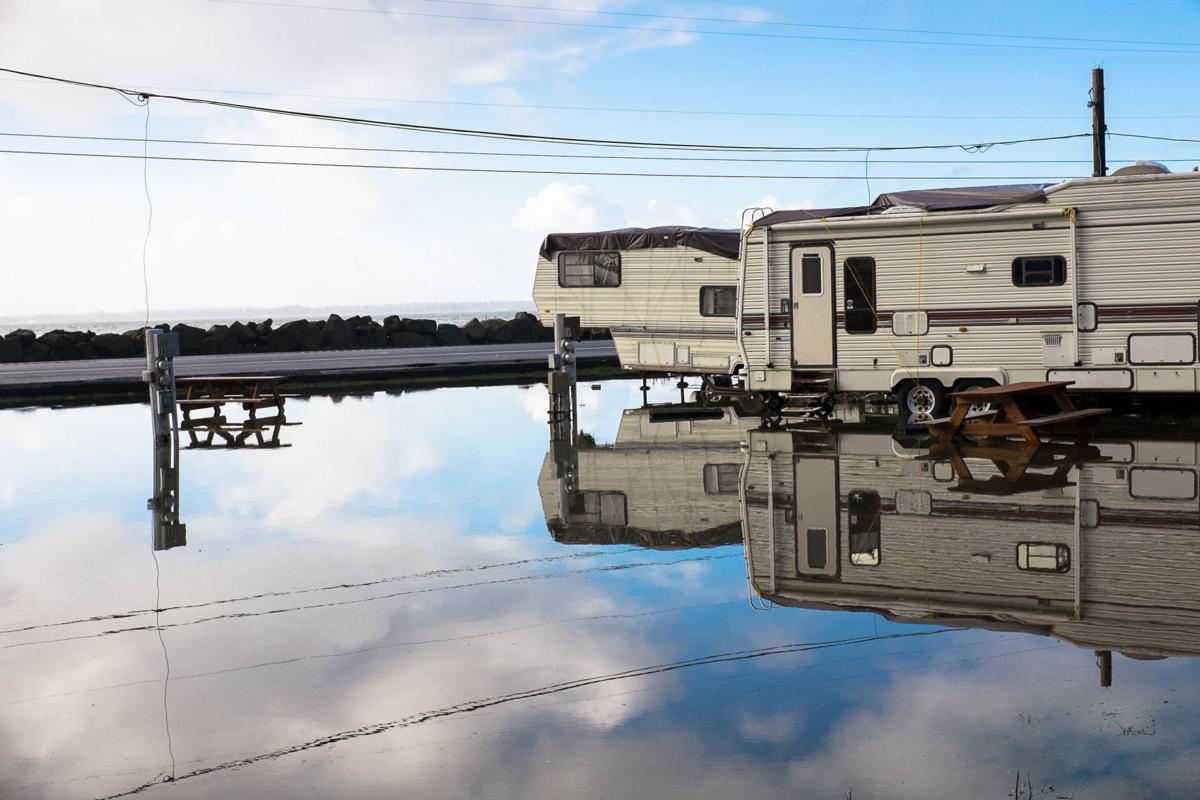 In the aftermath of a heavy rainstorm, most of Mauch's Sundown RV Park was under water on Jan. 22. 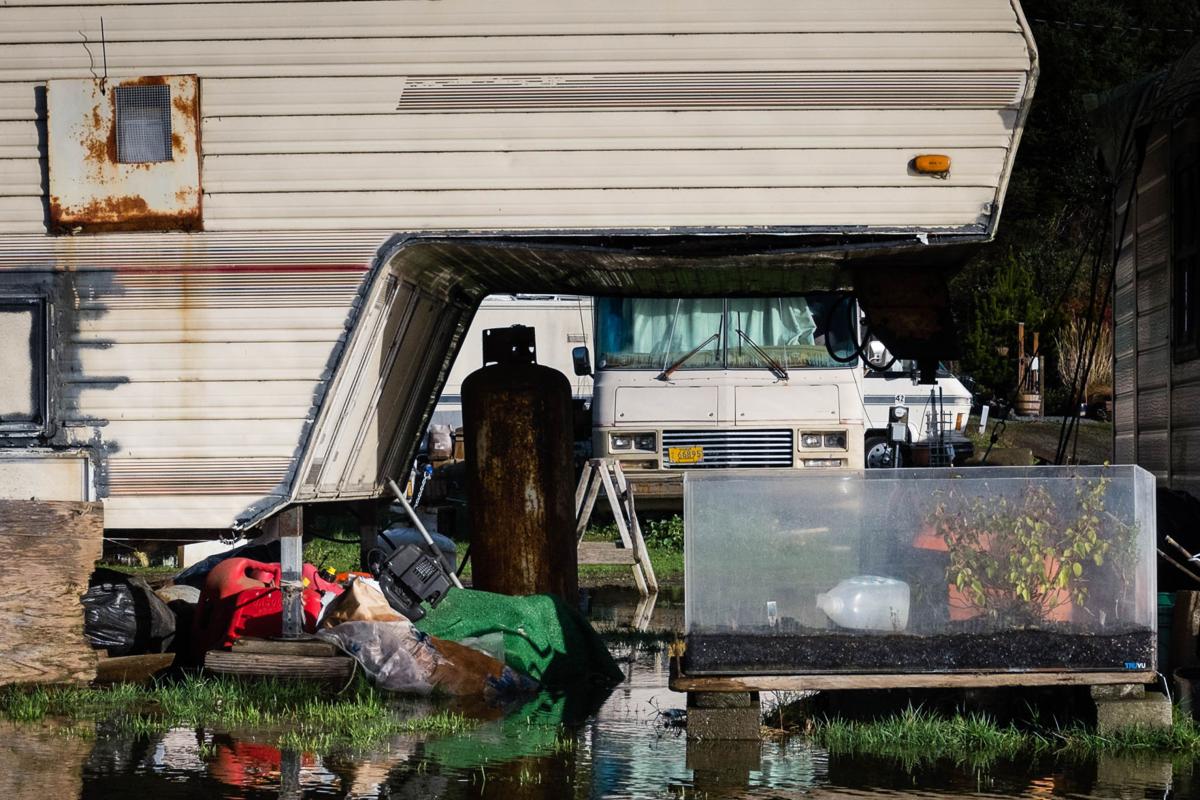 Neighbors complain that Mauch's owner Weldon Pior and the Pacific County Department of Community Development have been too slow to deal with a range of issues, including overcrowding, and accumulations of junk and trash. 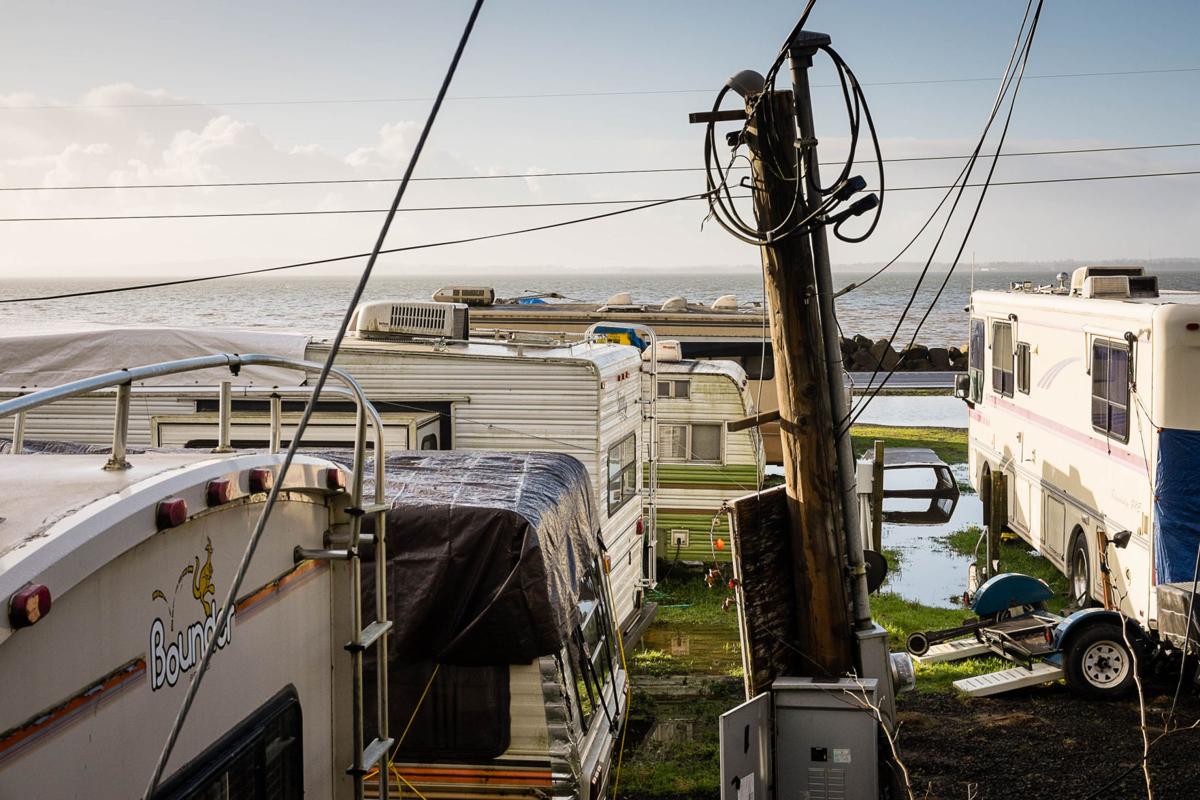 Mauch's Sundown RV Park sits directly in front of Nancy Lloyd's and Gary Mauro's homes. Many RVs in the park are deteriorating and haven't been registered in years. But county regulations are vague, and don't include specific registration or length-of-stay requirements. 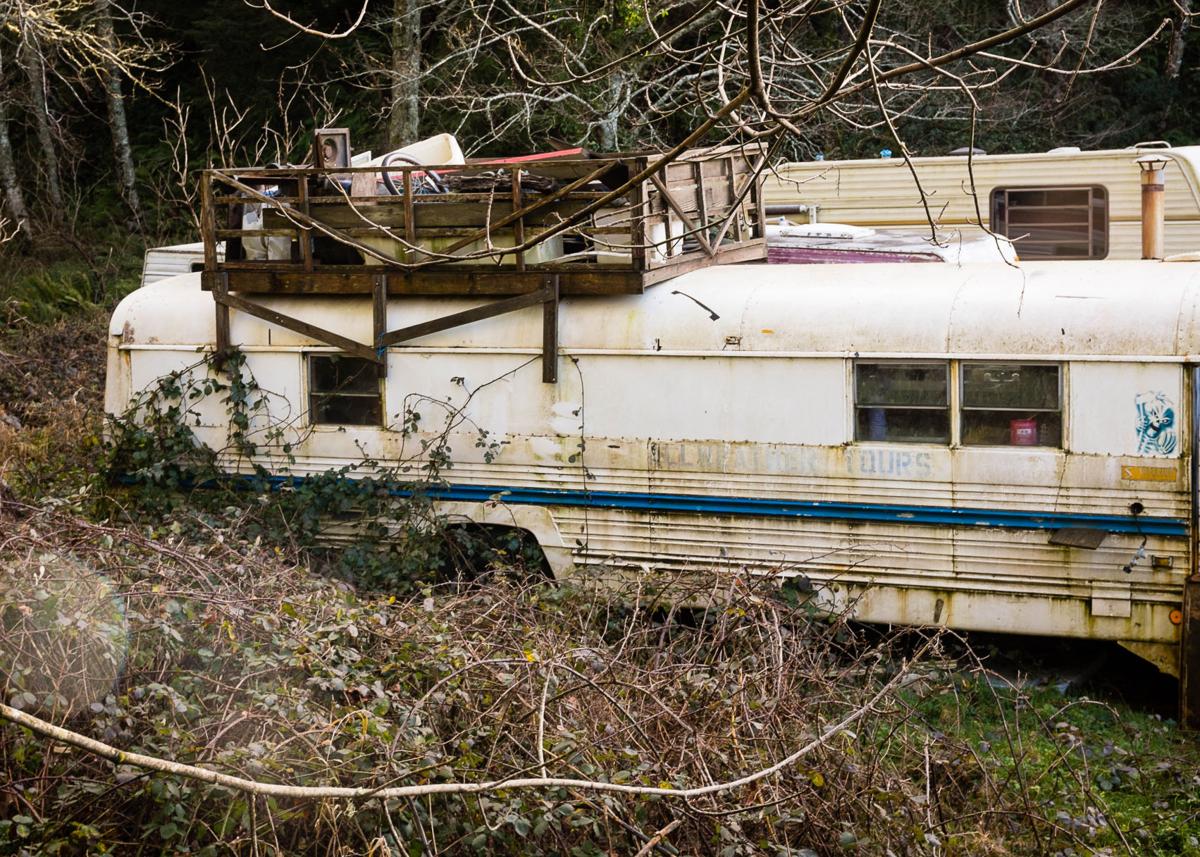 This school bus sits just a few yards from Nancy Lloyd's home in the neighboring Mauch's Sundown RV Park. She'd like owner Weldon Pior to clean up the property.

In the aftermath of a heavy rainstorm, most of Mauch's Sundown RV Park was under water on Jan. 22.

Neighbors complain that Mauch's owner Weldon Pior and the Pacific County Department of Community Development have been too slow to deal with a range of issues, including overcrowding, and accumulations of junk and trash.

Mauch's Sundown RV Park sits directly in front of Nancy Lloyd's and Gary Mauro's homes. Many RVs in the park are deteriorating and haven't been registered in years. But county regulations are vague, and don't include specific registration or length-of-stay requirements.

This school bus sits just a few yards from Nancy Lloyd's home in the neighboring Mauch's Sundown RV Park. She'd like owner Weldon Pior to clean up the property.

CHINOOK, Wash. — Nancy Lloyd and her neighbors Paula and Gary Mauro should be able to see Baker Bay from their front yards. Instead, their view is dominated by another body of water — the vast mud-puddle that surrounds the tarp-covered campers in Mauch’s Sundown RV park.

Lloyd and Gary Mauro, who both live behind the park, say both the county and Mauch’s owner, Weldon Pior, have allowed code violations and other problems to persist for years. Fed up with the lack of progress, Lloyd in December started an online petition, asking the Pacific County Department of Community Development not to renew the Mauch’s operating license — a move that would effectively shut down the park.

In a January interview, Lloyd said she wanted “to get the county’s attention.”

“Take care of the solid waste. Take care of the sewage. Take care of the water that piles up here. Register the vehicles and make sure the people who live here are not walking through sewer water. There are too many vehicles crammed in here. Make it orderly so people don’t have to walk in the mud to get to the bathroom,” Lloyd said. “The reason I am asking to have this park closed is that I have asked a less extreme question multiple times over five and a half years, and received no answer.”

Community Development Director Faith Taylor-Eldred and Assistant Director Tim Crose say they are working with owner Pior to address problems at Mauch’s. However, they say their authority to act is limited, because the county’s RV park ordinance is too vague. Furthermore, they say that they can’t take any serious action without risking displacement of vulnerable, low-income people.

Pior, a Chinook pastor who has managed the park for decades, did not grant an interview.

“I have no comment,” Pior said in late January. “I have found that it’s better to keep my mouth shut.”

Founded in the 1970s, Mauch’s has long been popular with fishermen. It was never a fancy place even in its heyday, but it provides scenery and convenience at an affordable price.

From the highway, the park still looks pleasant, if a bit shabby. However, the view from Lloyd’s or the Mauros’ yards provides a strikingly different perspective. Moss and vine-covered RVs are packed in close to the property line. Many haven’t been registered or moved in years. Some sites are littered with junk. Blackberry brambles and tangled power lines proliferate. Rooftop tarps flap in the breeze. Lloyd’s kitchen window looks out on an ancient white school bus with a skeleton painted on the door, and a Clampett-style mountain of decaying furniture piled on top.

It’s true that the park was well-established when Lloyd and Mauro bought their homes. However, both neighbors needed to be close to Astoria, and quickly found that there were very few properties that fit their needs and budgets. So, just like many Mauch’s residents, they chose this location in spite of its flaws, because it was the best option available to them.

“It was an answered prayer. There’s only two homes in the whole world that would have met that criteria. This was one of them,” Mauro said. “I think I just kind of assumed that the folks in charge would resolve it.”

According to Lloyd, the problems have steadily gotten worse, and her appeals to community development have accomplished very little.

“My impression is that (in the past) it was not stuffed with solid waste like it is now,” Lloyd said. “It looks like nobody cares, and that is a fairly recent development.”

According to documents provided by Lloyd, development staff began asking Pior to make changes in 2009. There were documented concerns about an unsafe structure, raw sewage on the ground and sewer lines that backed up, and piles of trash. In 2011, a community development staffer noted “a great deal of non-compliance” with county health Ordinance5, which lays out the rules for RV parks, and “another sewage backup”.

Lloyd began complaining to the county in 2010, when she noticed that the park was getting more crowded and junk was piling up.

One couple “parked in the easement all the time and had crap from hell to breakfast,” Lloyd recalled. “... they don’t have enough room here. They need outbuildings. They need storage units. They need something.”

County staff contacted Pior and visited Mauch’s periodically until mid-2012, when he had satisfied all of their requirements. In Lloyd’s opinion, the county never fully addressed the problems, and the property quickly started to deteriorate again. She continued writing to report concerns about garbage, leaking sewage and other issues.

Late last year, commissioners offered to schedule a workshop to discuss Mauch’s. By then, Lloyd was fed up with following the county’s protocol. She has not spoken directly with Pior, but says she didn’t think much good would come of it. She decided to create the petition.

Mauro got involved after reading five years of communication between Lloyd and the county.

“When I discovered the effort to which one of the citizens had gone to raise this issue, and the county basically stonewalled, that got me interested,” Mauro said. “Clearly by the paper trail, the county knew. They knew, and they know.”

On Jan. 22, a lagoon of stormwater stretched from one end of the 4.35-acre park to the other, and spilled onto U.S. Highway 101. At the northern end, the dirt lane that leads to Lloyd’s and Mauro’s homes was under a foot of water. At the southern end of the park, the water had triggered the alarm on a meter. It shrieked relentlessly, but no one came around to turn it off.

Two park residents said they hadn’t heard about the petition to close the park.

“I can see why — it’s kind of trashy,” said a middle-aged woman with a tidy space and a travel-ready trailer. She had lived in the park for a few months, and planned to stay a while longer. She said it wasn’t as nice as other places, but she had no serious complaints.

Another man with a well-maintained space said he was a seasonal worker who stays at Mauch’s because it is affordable and convenient. The man said living in a semi-permanent mud puddle was a bother, but he had only one serious concern — the water from the Mauch’s well, which also feeds surrounding properties — is so unappealing that he and his roommate only drink bottled water.

He fetched a glass of water. The water looked fine, but tasted and smelled of rotten eggs.

The state Department of Health inspects the well every few years, and requires Pior to document maintenance and submit samples. Andy Anderson, a state health employee in the well program, said Pior has generally complied with state requirements. An unpleasant, but harmless, type of bacteria was probably causing the sulphurous smell and taste. It’s not unusual for bacteria to get into a water system when well components aren’t properly sanitized during installation, Anderson said.

“That would make it smell like eggs,” Anderson said. Tests have consistently shown that the water is safe to drink.

“The only time we would ever close down a park is if we had ongoing public health or fire and safety issues that have not been addressed,” Taylor-Eldred said. “Every time we have had complaints (at Mauch’s), they have been addressed.”

The county has the right to inspect RV parks and enforce health, safety and building rules. In practice, Taylor-Eldred said the county typically does inspections when they are required by ordinance, or when someone has made a complaint in writing about an enforceable issue. The last overall inspection of the park was in September 2014.

“We have done other complaint-driven investigations since then,” Taylor-Eldred said, but those were fairly focused on specific problems.

Taylor-Eldred said only two citizens have officially complained. Park residents have occasionally spoken through third-parties, but never put their concerns on record.

Community development staff met in December to discuss the park, and staff in the solid waste and on-site septic divisions are currently working with Pior, Taylor-Eldred said. Recently, staff did document two spots where there was sewage on the ground, possibly due to failing equipment, or a plugged pipe, but both issues are being addressed.

“We are actively watching that situation,” Taylor-Eldred said. “... Mr. Pior has come into compliance with everything we’ve asked.”

However, Taylor-Eldred and Crose said they will need help from the county prosecutor, commissioners and maybe even state policy-makers before they can confront other long-standing issues at Mauch’s and other RV parks. The 1996 RV park ordinance doesn’t say whether RVs need to be registered, licensed, or in good repair. It also says RV parks are supposed to be a “temporary” accommodation, but it doesn’t say how long guests should be allowed to stay, so county employees don’t have much authority to deal with those issues.

In the existing ordinance, “... there’s both vagueness, and there’s areas that aren’t even addressed,” Taylor-Eldred said. The prosecutor’s office is reviewing county policies, and may suggest revisions to the ordinance.

Crose said there are other legal and ethical dilemmas that arise when RV parks are used as a form of low-income housing. State law generally treats people who stay in RV parks as guests — not tenants, so many health, safety, fire, building and landlord-tenant rules don’t apply.

“People live in them full-time and they’re not designed for full-time occupancy, but what do you do? How do you handle that?” Crose said. He explained that like other health officials across the state, county staffers are struggling to develop policies that maintain standards without displacing people who have no other housing options.

“They have to have some place for these people to go. It’s a real social issue,” Crose said.