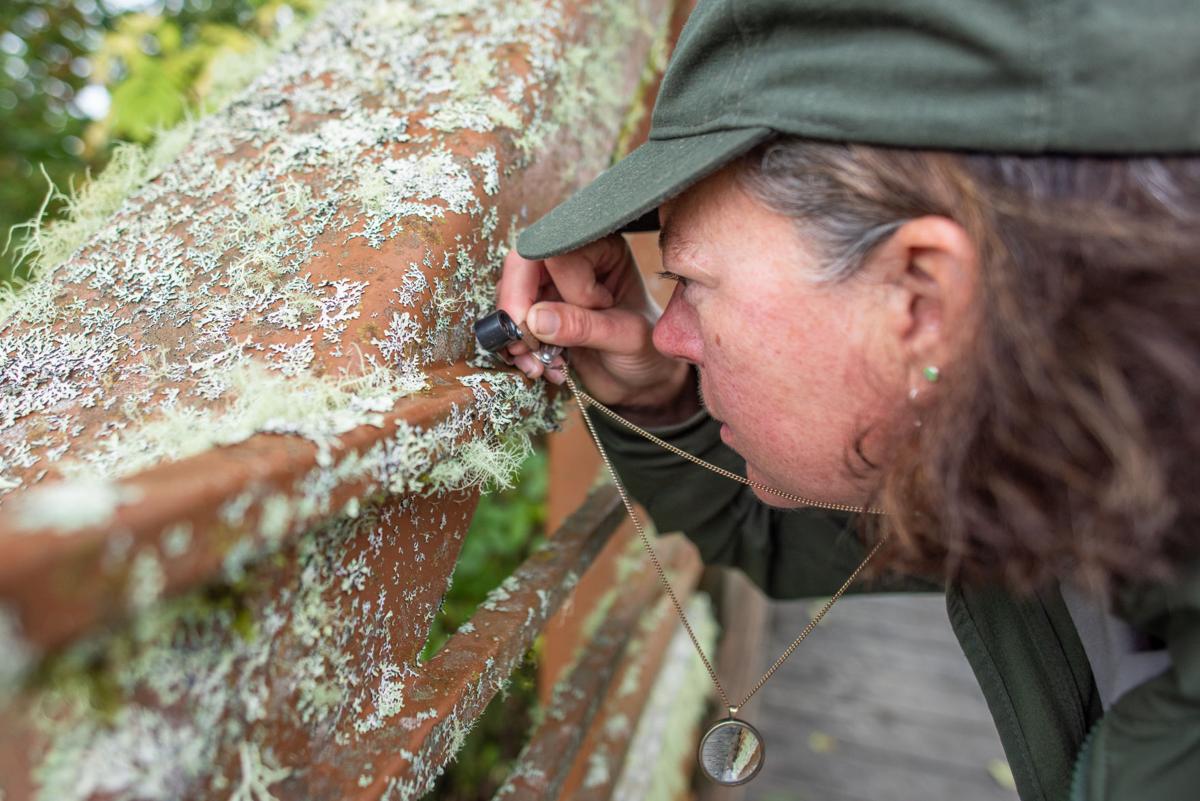 Carla Cole, the natural resources project manager at Lewis and Clark National Historical Park, peers through a magnifying glass at a patch of lichen on a bridge on the Netul River Trail. 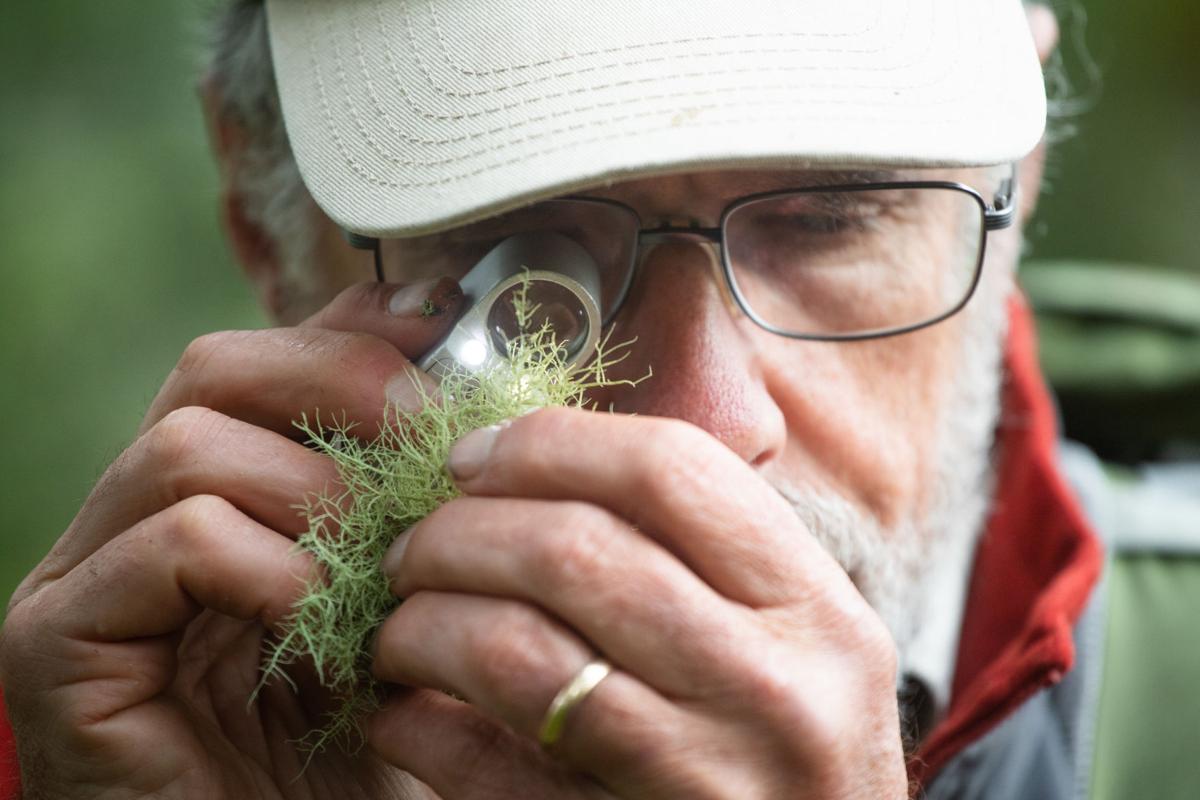 Bruce McCune, a professor at Oregon State University and a leader in the field of lichenology, analyzes a sample of fruticose lichen. 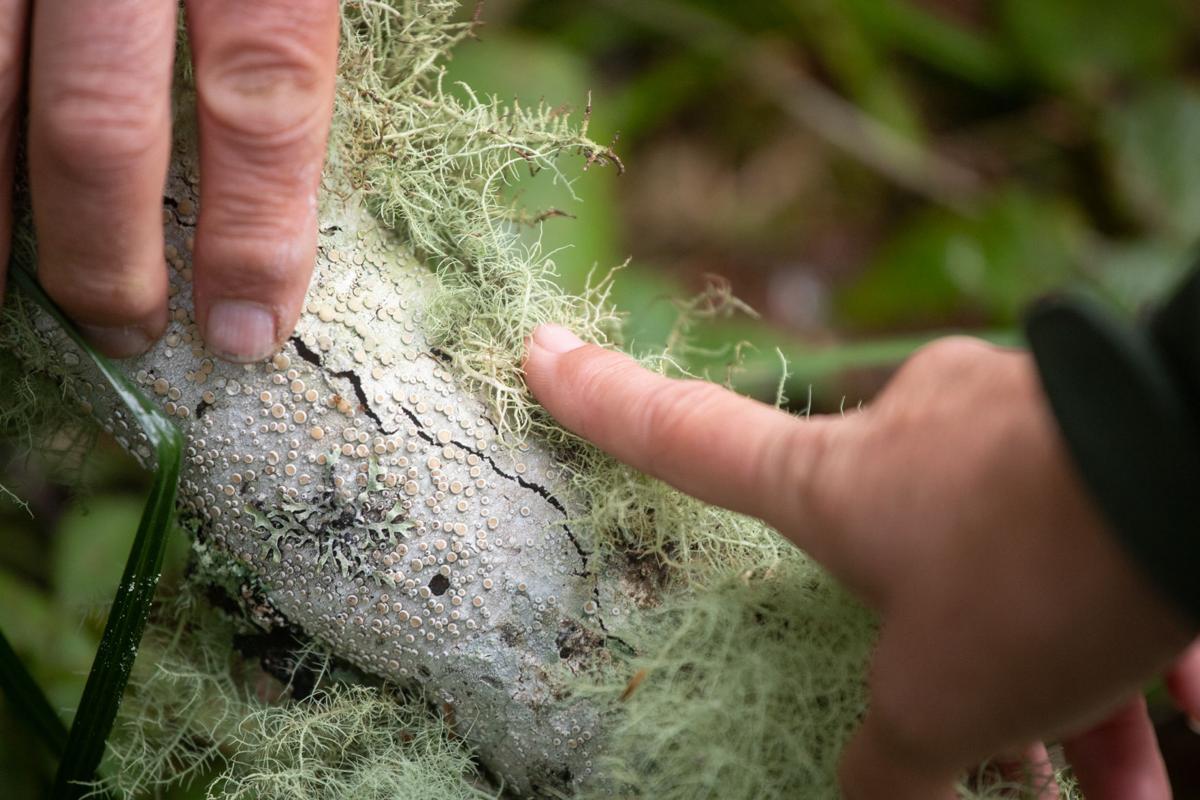 Volunteers with Northwest Lichenologists identify different types of lichen throughout the park. The small orange dots are a type of ochrolechia lichen, commonly known as ‘pumpkin pie lichen.’ 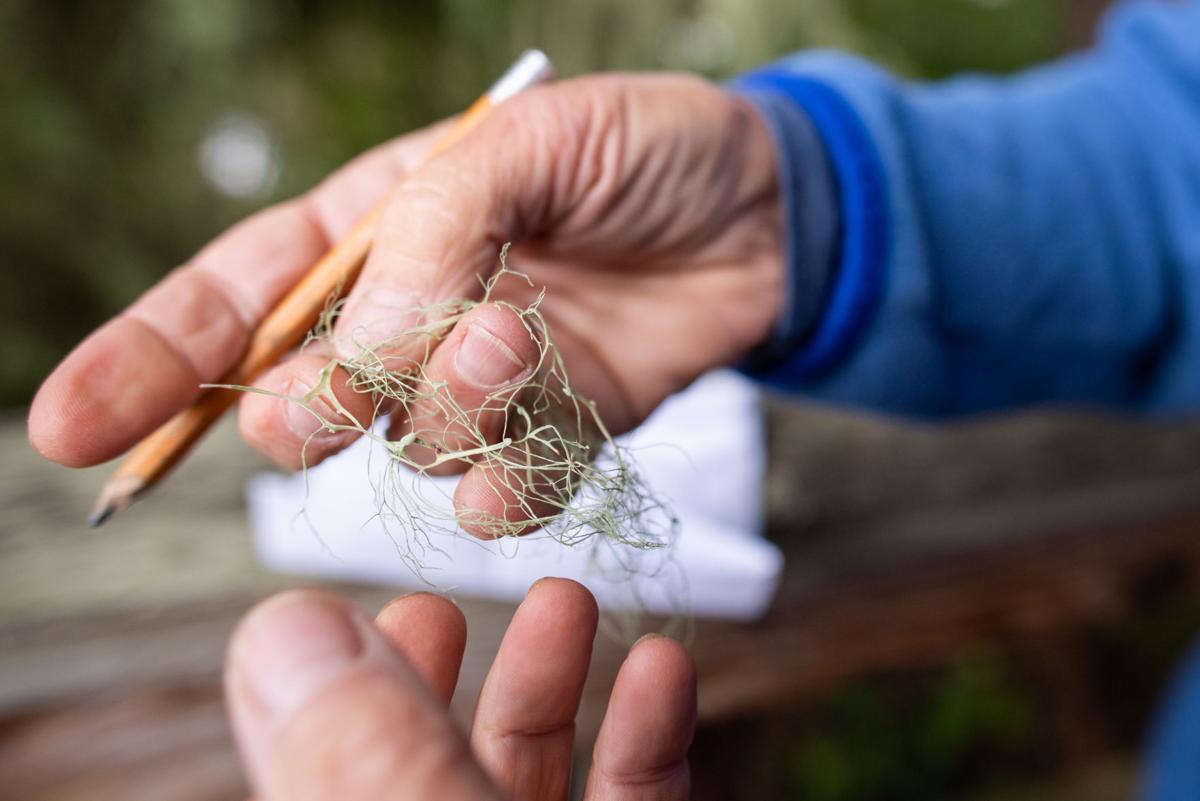 Daphne Stone, also known as Dr. Usnea, holds a sample of usnea lichen she pulled from a tree branch. Usnea grow in small net patterns to catch water from the air and are indicators of good air quality.

Swaying in the wind on a tree outside of Fort Clatsop hangs what looks like a web of long, pale green ropes. It dangles and drips in the rain, twisting through branches and swooping toward the ground below.

It’s called usnea, a type of lichen, but it’s more commonly referred to as “old man’s beard.” It’s beautiful, but easy to miss, unless you’re walking alongside Bruce McCune or Daphne Stone.

Their colleagues call them Mr. Lichen and Dr. Usnea, and they helped improve the nation’s understanding of lichen, a slow-growing compound organism often compared to moss.

They can’t help but stop as they walk toward, below and under the tree, followed by five other lichen enthusiasts. They crouch down and pick up bits of the fallen specimen, pull their hand lens necklaces toward their faces and press their noses against the tree bark. They stand there for minutes, asking and answering questions, exchanging joyful exclamations, jotting down notes on brown paper.

And they haven’t even left the parking lot yet.

McCune and Stone are lichenology experts and pioneers of the field. Throughout the past three decades, their knowledge has guided a new wave of scientists toward the small, colorful organism that covers 6% of the earth’s surface.

This week, they guided the Northwest Lichenologists, a nonprofit that promotes professional training, through the Lewis and Clark National Historical Park. The team of seven conducted lichen surveys, each bearing a pocket knife, a hand lens and a bag full of the leafy, scaly species.

This is big news for the park. Without the help of the volunteer lichenologists, the park would have to draft contracts, secure funding and possibly wait years to conduct similar surveys.

In just three days, the park’s lichen herbarium — a collection of preserved plant species kept under lock and key in a climate-controlled room — more than doubled.

“A good starting point is to at least know what species we have,” Carla Cole, the park’s natural resources project manager, said. “To really manage things properly, you have to know what you have, so we’re always wanting more inventory.”

At the park, making that inventory list took time, as the region is covered in lichens. It took the lichenologists more than an hour to drop from the visitor center to a footbridge less than half a mile away.

And that’s a really good sign for the plants, the park and the people that live here.

It means the air we’re breathing is clean.

Because of their genetic build, lichens are extremely sensitive to their living conditions, which makes them natural air quality indicators.

“They care about where they live, so now we use lichens to notice air quality,” Stone said. “The lichens are out there getting the air blown by them all the time, so they know much more about air quality than a machine can measure, or than we think we know.”

Scientists throughout the country utilize lichens to study air quality and better understand the impact humans have on their natural surroundings. In highly polluted urban areas, lichens are few and far between. In Clatsop County’s cool and moist coastal climate, lichens are everywhere: dangling off branches, growing on road signs, clinging to bridges.

But it’s not just the fact that they’re here that matters. The specific type of lichens scientists found tell us even more about the air.

“By looking at the lichens we find on a plot, we can tell exactly what the air quality is like, which is just amazing,” she said. “There’s nothing else that sensitive.”

In regions dominated by agricultural land, such as parts of Oregon’s Interstate 5 corridor, small, orange-tinted lichens grow aggressively, a sign that the air is polluted with nitrogen compounds.

“We’re not seeing that at all here,” Stone said. Instead, the survey team found abundant amounts of cyanolichen, which enhance tree growth and are not found in polluted places. “It means that the air is really clean.”

Understanding the lichens that thrive in this region is a crucial first step for the National Park Service.

Lichens are at the base of the food chain. They act as their own miniature forest and provide a habitat for small, sometimes microscopic animals. Larger predators, such as birds, frogs and bigger bugs, pick through lichens to feed on those smaller creatures. The more park monitors know about the lichens, the more they can understand all the animals that live in the region.

“There’s a lot of life going on at the tiny level inside the lichen habitat,” Cole said.

An understanding of the lichens throughout the park’s seven units will help guide it forward. Discovering and recording different types of lichens throughout habitats will influence design plans and enhance habitat diversity. The knowledge helps guide restoration projects for prairies and wildflower meadows, according to Cole.

“The first step in knowing what to do is getting these basic inventories and species lists down,” she said. “That always informs the next step of management.”

Lichens are epiphytes, which means they don’t take nutrients from the plants they grow on, and though lichens are often wrongly blamed for killing trees, they actually enhance growth by retaining moisture and stabilizing soil.

Lichens also have medicinal properties and cultural value. Native Americans used lichens to dye wool and Scandinavians feed them to reindeer. Some lichens, such as usnea, have an antibiotic substance used in tinctures and sold commercially.

But none of those reasons are what drew Stone or McCune to lichenology.

For McCune, it was “the lure of the unknown.”

“It’s as if they’re from outer space,” he said. “They’re weird forms. They’re beautiful, they’re colorful, they’re so varied in form. It’s just one surprise after another.”

For Stone, it was the fact that they made intricate fairy houses when she was a young girl.

“I loved all the details I found on the forest floor,” she said, “and one of them was lichens.”

Now, she has a general tip for anyone interested in exploring the lichens in their own backyard or in the park.

“Anything that looks like it came out of a Dr. Seuss book,” she said, “is probably a lichen.”