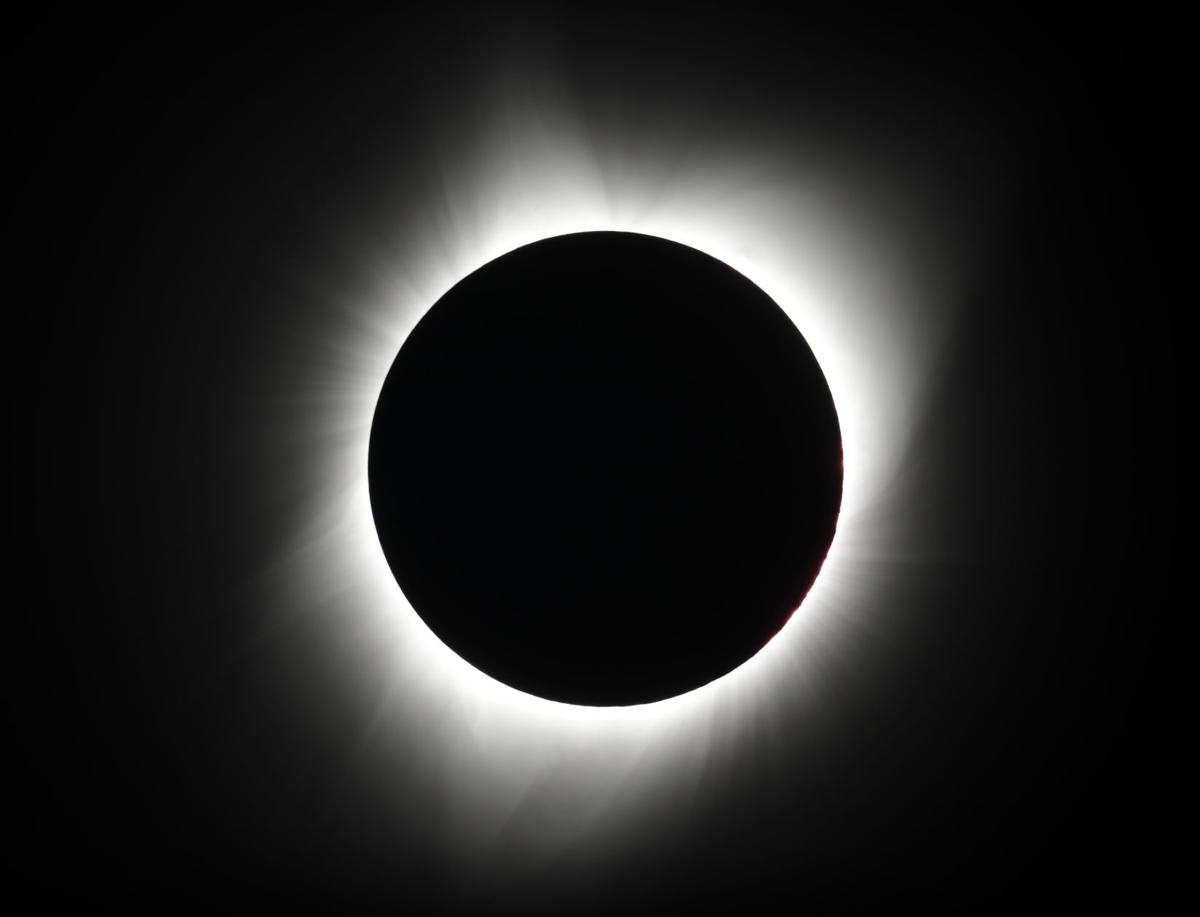 The moon covers the sun during a total solar eclipse this morning near Redmond. 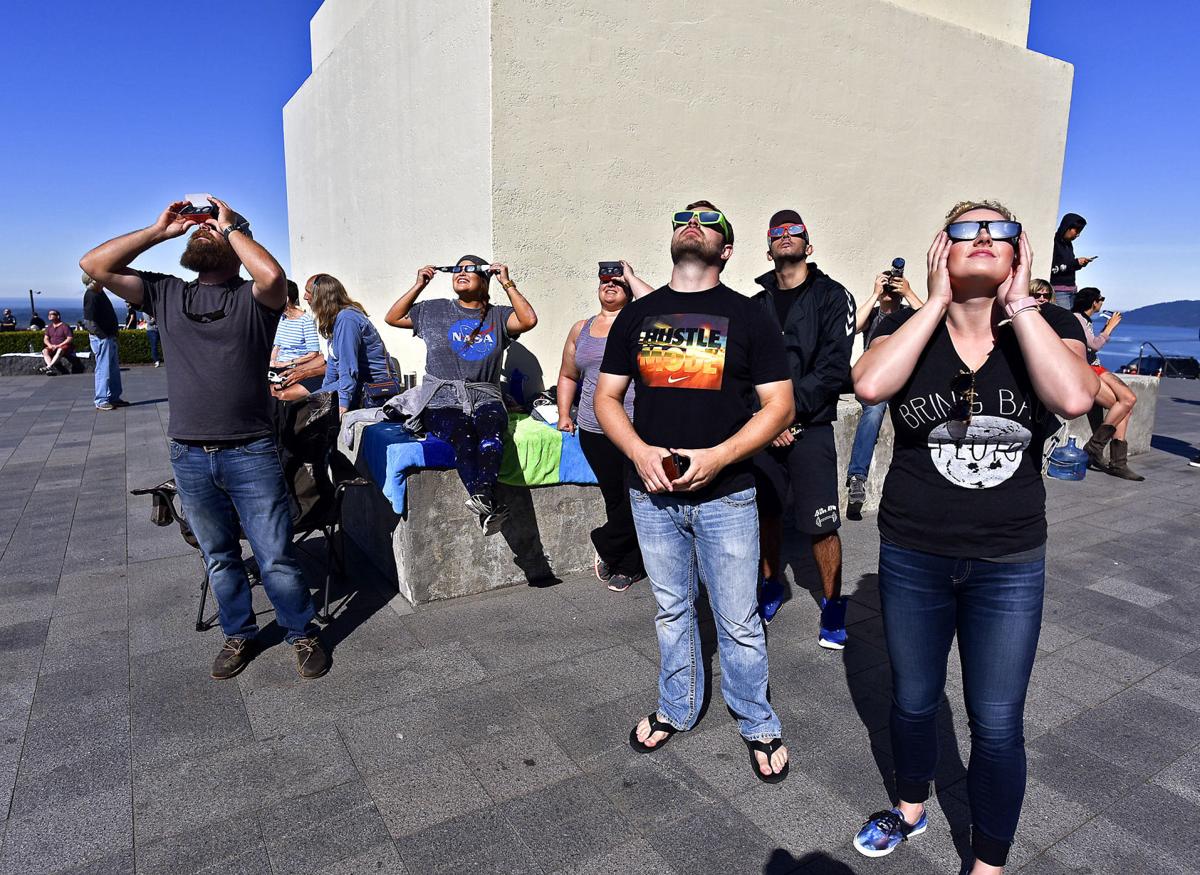 People at the base of the Astoria Column gaze up at a total solar eclipse this morning. Hundreds of people chose the spot to observe the phenomenon. 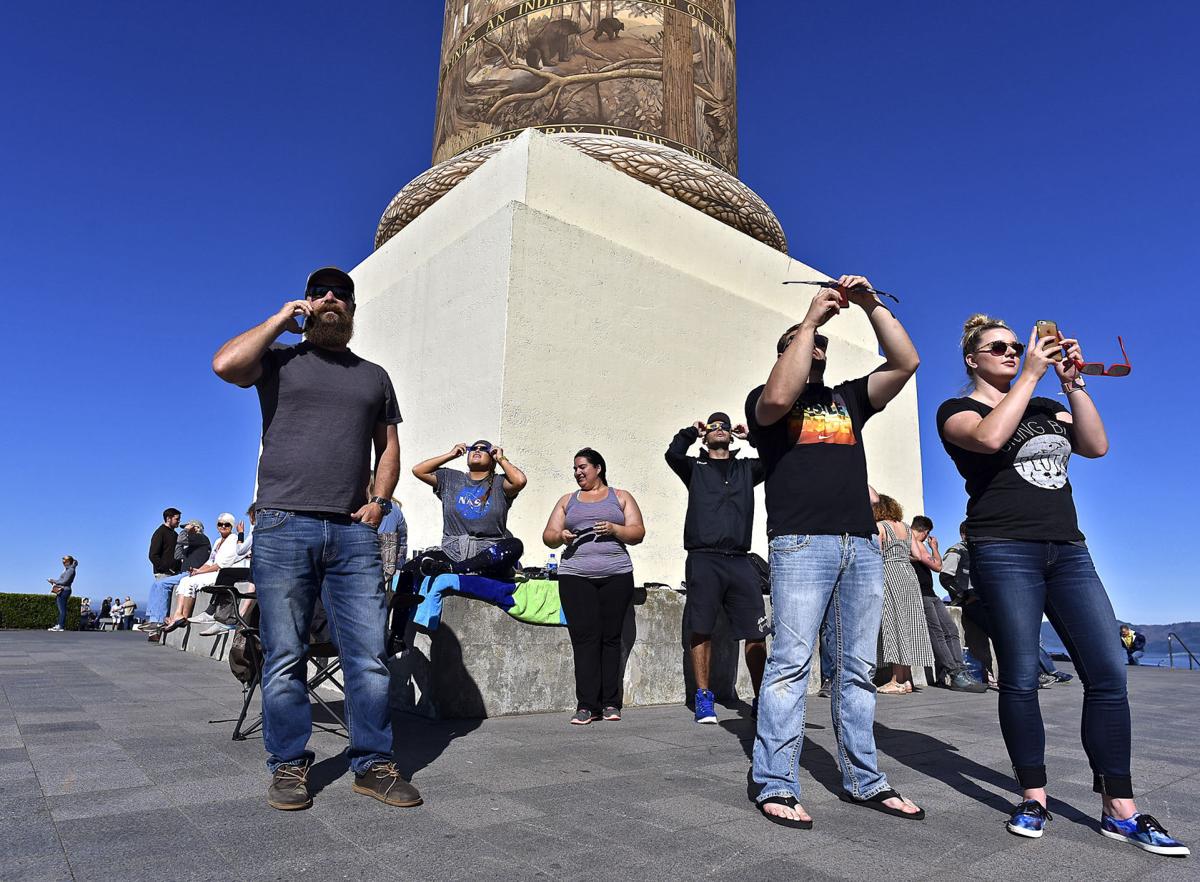 Hundreds of people gathered at the Astoria Column this morning to observe the total solar eclipse. 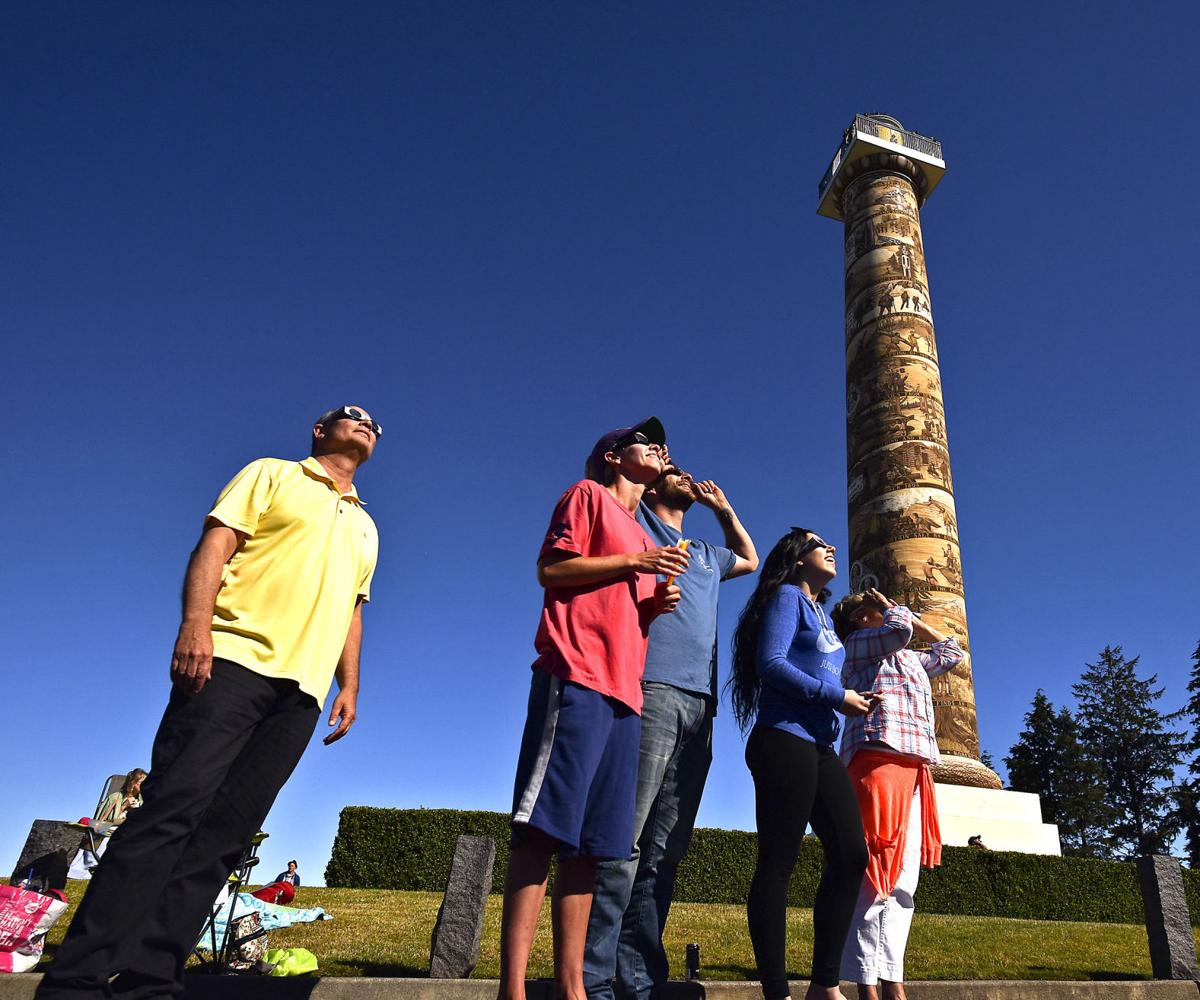 A large gathering of people arrived at the Astoria Column this morning to observe the total solar eclipse. 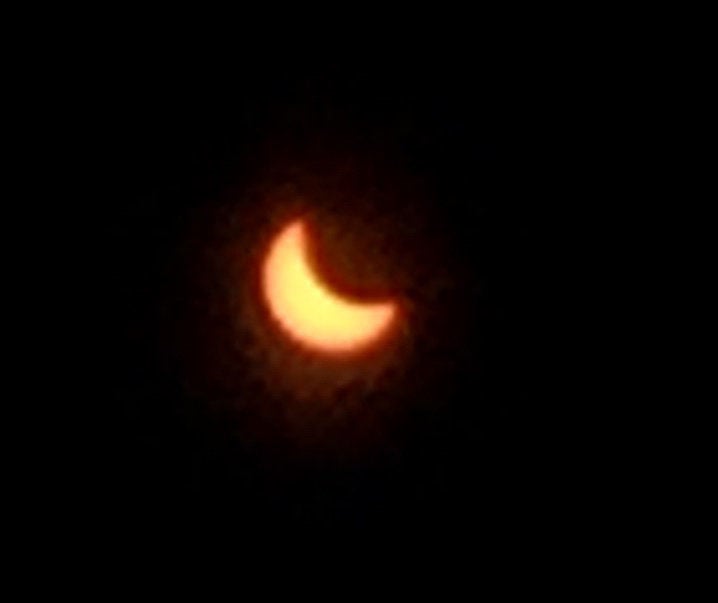 A look at the eclipse from Astoria. 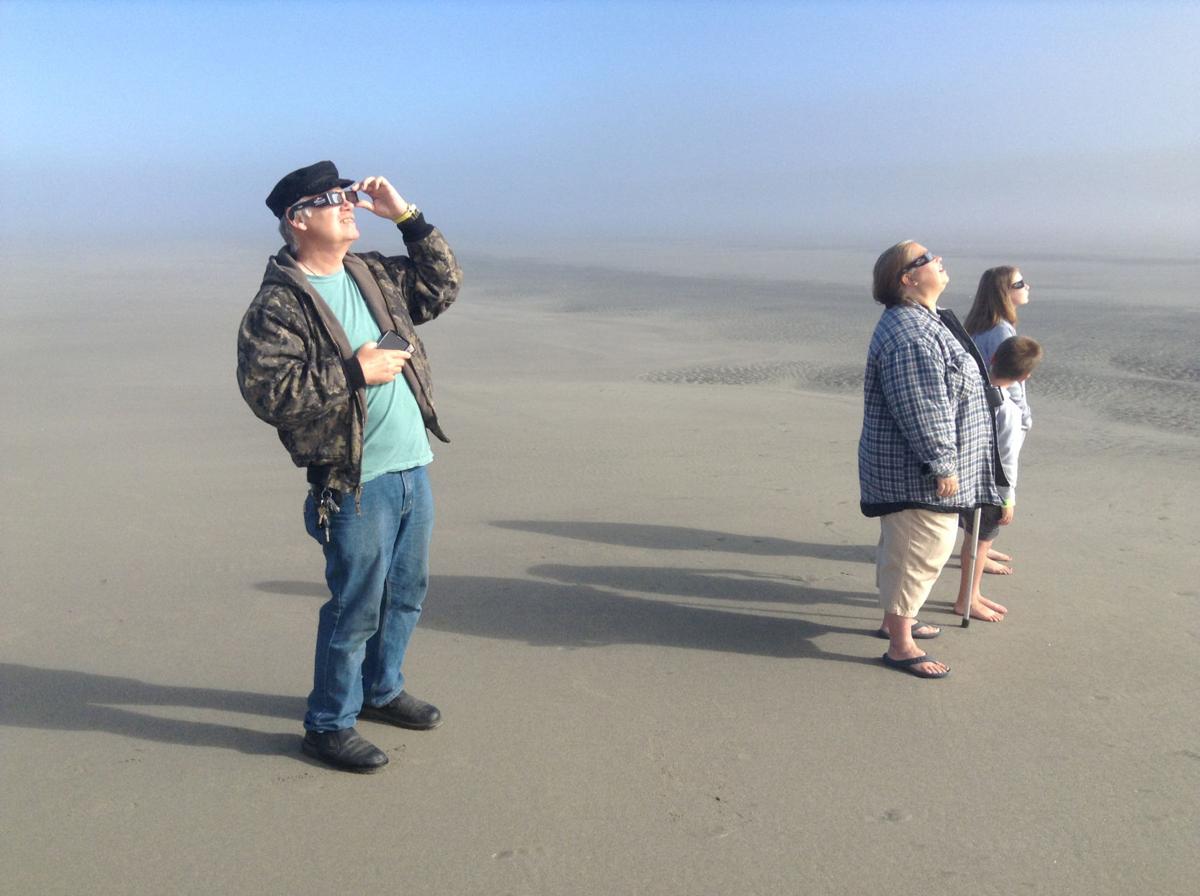 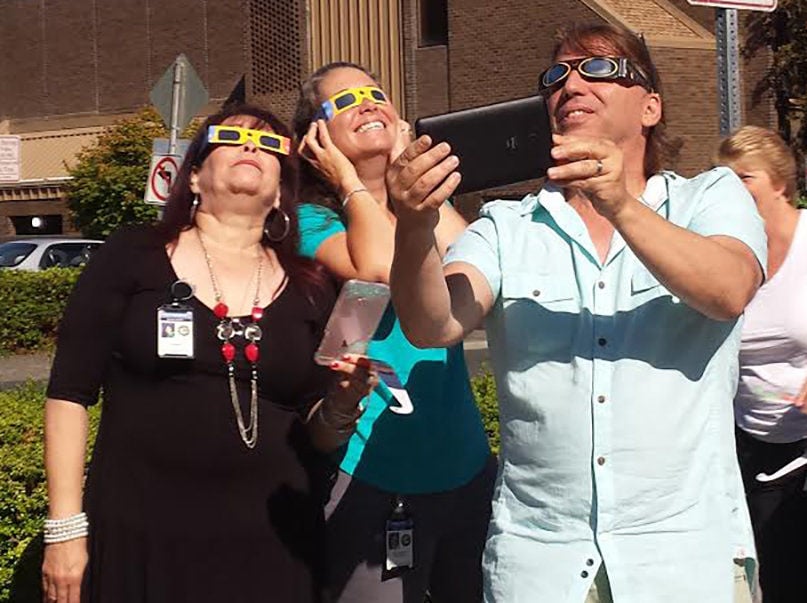 The moon covers the sun during a total solar eclipse this morning near Redmond.

People at the base of the Astoria Column gaze up at a total solar eclipse this morning. Hundreds of people chose the spot to observe the phenomenon.

Hundreds of people gathered at the Astoria Column this morning to observe the total solar eclipse.

A large gathering of people arrived at the Astoria Column this morning to observe the total solar eclipse.

A look at the eclipse from Astoria.

A total solar eclipse darkened the sky over Astoria this morning as the celestial phenomenon left its shadow and awe across Oregon and the United States.

The North Coast was outside the path of totality — where the moon blocked out the sun — but that did not deter skywatchers from going outside to observe the rare moment.

Patchy early morning clouds and fog gave way to sunshine before the eclipse shielded all but a sliver of the sun at 10:18 a.m. and the temperature dropped.

Some people ducked out of work for a few minutes to catch a glimpse of the changing sky. Others staked out spots near the region’s most iconic landmarks.

“A lifetime event. It’s better in a group,” said Sue Farmer, who watched with several others in the parking lot of the Astoria Library downtown.

As clouds rolled away from the hills surrounding the Astoria Column about 8 a.m. this morning, cars carrying eclipse viewers rolled in.

Workers at the Column were not entirely sure what to expect. “Happy Eclipse Day,” two gift shop employees said to each other when the shop opened.

The gift store opened an hour early, and park host Fred Pynes said he fielded many questions about the eclipse from visitors over the weekend. But about an hour before the event began, clouds were just starting to disappear and not a lot of people had arrived. “We thought we were really going to get hammered,” Pynes said.

But as the morning progressed, the parking lot filled to the point where park staff started double-parking drivers and traffic at the top of Coxcomb Drive stalled.

Jim Richardson, a park keeper at the Column who lives in Astoria, said the influx of visitors would be good for the Column. Of course, if any of the eclipse doomsday scenarios that had been theorized actually happened, it might not have made much of a difference.

“We’re all going to disintegrate at 10:30 anyway,” Richardson said with a laugh.

When the moment of near totality took place just after 10:15 a.m., the sky turned to dusk, the hundreds of viewers became quieter, birds stopped chirping and the surrounding trees changed tint.

“It’s goofy the way it looks,” said Dale Walluski, who lives near the Clatsop County Fairgrounds. “I know I’m not sick, but for a moment you feel like you are.”

As the sky brightened seconds after the moment ended, eclipse viewers began hurrying to their cars to escape the traffic. Within the next few hours, it was just another sunny day at the Column.

Many of the people who watched the eclipse at the Peter Iredale shipwreck in Fort Stevens State Park near Warrenton ended up here by accident. One family sitting near the wreck, a sleeping bag spread over their laps, said they often come down from their home in Enumclaw, Washington, to camp. This year, they just happened to make a reservation that overlapped with the eclipse.

Thomas Dietrich of Tacoma, Washington, drove down with his son and their dog Sunday night. As he had hoped, they avoided much of the traffic by leaving later in the day. They found a campsite in the park, but hadn’t been able to find eclipse glasses. Everywhere they checked was sold out.

This didn’t phase Dietrich’s 6-year-old son, Thomas, though. “I just want to feel the temperature drop!” he said.

Temperatures started to drop and the light became dim and purple. Groups of people appeared and disappeared in swirls of marine fog. The beach looked like another planet in the murky twilight. Two dogs raced across the dunes, intent on the chase, oblivious to anything else.

Then, just as Chris and Kyle Carroll of Scott City, Kansas, felt they had begun to really notice the eerie light, it was over. The pockets of sky visible through the fog turned back to blue and people took off their glasses.

“We didn’t think it was going to be a very big deal, but that was really cool,” Kyle Carroll said. She remembered looking at a pinhole setup as a kid, but said looking through glasses provided a completely different experience.

Chris Carroll joked that it was still kind of like Christmas.

“There’s such a big buildup and then, OK, I opened my presents, time to go back to bed.”

Without context, seeing all of the beach chairs in Cannon Beach facing away from the ocean this morning would have seemed strange.

But beachgoers today turned their back on the Pacific to watch the eclipse. While there weren’t hordes of people, eclipse enthusiasts slowly trickled onto the sand with beach chairs and solar glasses waiting for the sky to go dark.

People huddled in blankets and put on more sweatshirts as the daytime sky began to dim and temperatures chilled. Across the beach, faces looked upward, mouths open with awe. Hotel employees in full uniform jogged onto the beach, glasses in hand, for the brief show.

Within seconds Haystack Rock was enshrouded in fog, the ocean fallen into darkness. The birds stopped flying, and all anyone could hear was the crash of the ocean waves.

“It’s pretty impressive. You intellectually know what is happening, but it’s just not the same until you see it,” Jeff Skinner, of Seattle, said as the eclipse approached its peak.

Elleda Wilson contributed to this report.