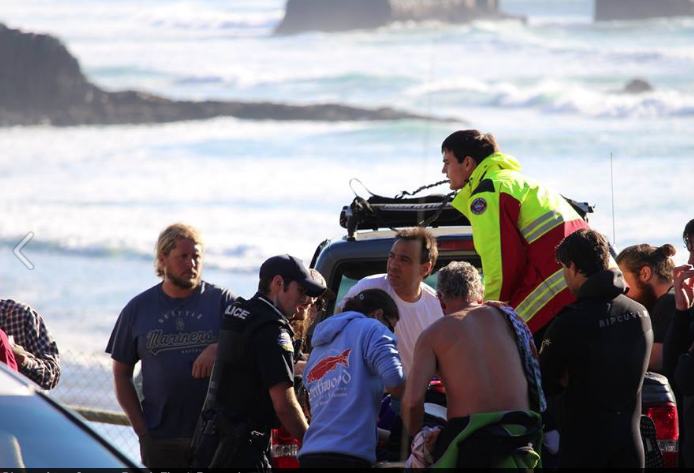 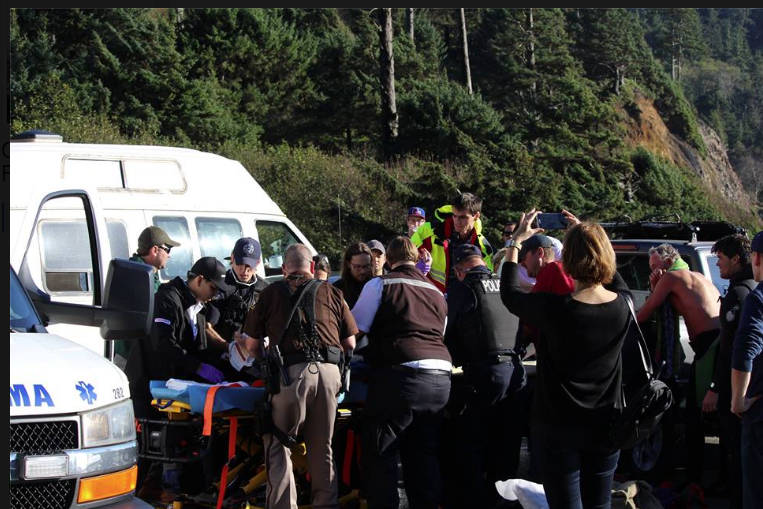 Firefighter David Norris and Cannon Beach Police Officer Matthew Nunnally along with firefighter Shaunna White work to stabilize surfer Joseph Tanner after he was attacked by a shark.

Firefighter David Norris and Cannon Beach Police Officer Matthew Nunnally along with firefighter Shaunna White work to stabilize surfer Joseph Tanner after he was attacked by a shark.

CANNON BEACH — Even after a severe shark bite, surfer Joseph Tanner was able to warn others of danger and direct bystanders how to tie a tourniquet around his leg.

Tanner, a 29-year-old trauma nurse in Portland, was surfing at Indian Beach in Ecola State Park when he was attacked by a shark late Monday afternoon, sustaining bites to his upper thigh and lower leg. He fought off the shark by hitting it in the face, Cannon Beach volunteer firefighter David Norris said.

Then bystanders at the beach applied a tourniquet to his thigh to stop the bleeding.

“He directed his own first aid, what needed to be done,” surfer Jeff Rose said. “He asked us a lot of questions: what we were seeing, if we saw spurting blood.”

According to eyewitness West Woodworth, 29, Tanner had been in the water for approximately 10 to 15 minutes before the shark attack occurred. When Woodworth paddled toward Tanner and another man, Tanner started to flail around.

According to Oregon State Police, Tanner yelled to others to get out of the water.

With Tanner providing instruction, they used the leash of Tanner’s surfboard with square knots as the tourniquet. Tanner was then placed on his board and carried to the parking lot.

Tanner was stabilized on scene and transported via air ambulance to Legacy Emanuel Medical Center in Portland with serious injuries.

Cannon Beach Rural Fire Protection District Chief Matt Benedict said it looked like the shark had sunk its teeth in.

“You have some big arteries in your leg so if you cut one, you could lose a lot of blood,” Benedict said.

The Oregon Parks and Recreation Department recommended that people using the ocean offshore, especially surfers, consult fellow surfers and experts with organizations such as the Surfrider Foundation.

In past years, surfers at the Seaside Cove, Oswald West State Park, Tillamook Head and Short Sand Beach have reported shark injuries, according to the Shark Research Institute. The last reported shark incident at Indian Beach occurred in 1988.

In 1979, a surfer reported being injured by a shark at Haystack Rock in Cannon Beach.

The online Global Shark Attack File database shows there have been 20 attacks off the Oregon coast during the past 25 years, all involving surfers who survived. The most recent happened three years ago, off Gleneden Beach in Lincoln County.

Investigators have yet to determine what type of shark bit Tanner.

The Associated Press contributed to this report.