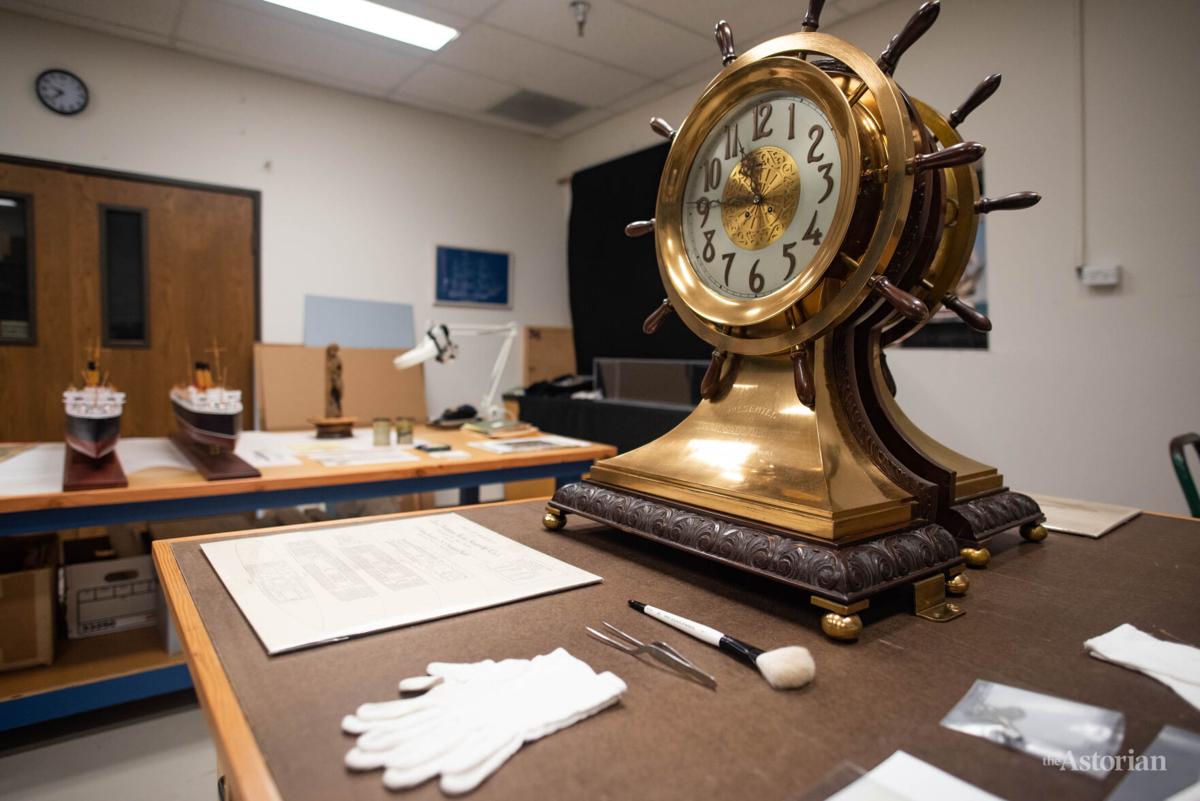 The twin clocks from the Great Northern and the Northern Pacific — facing back to back — will be on display at the Columbia River Maritime Museum. 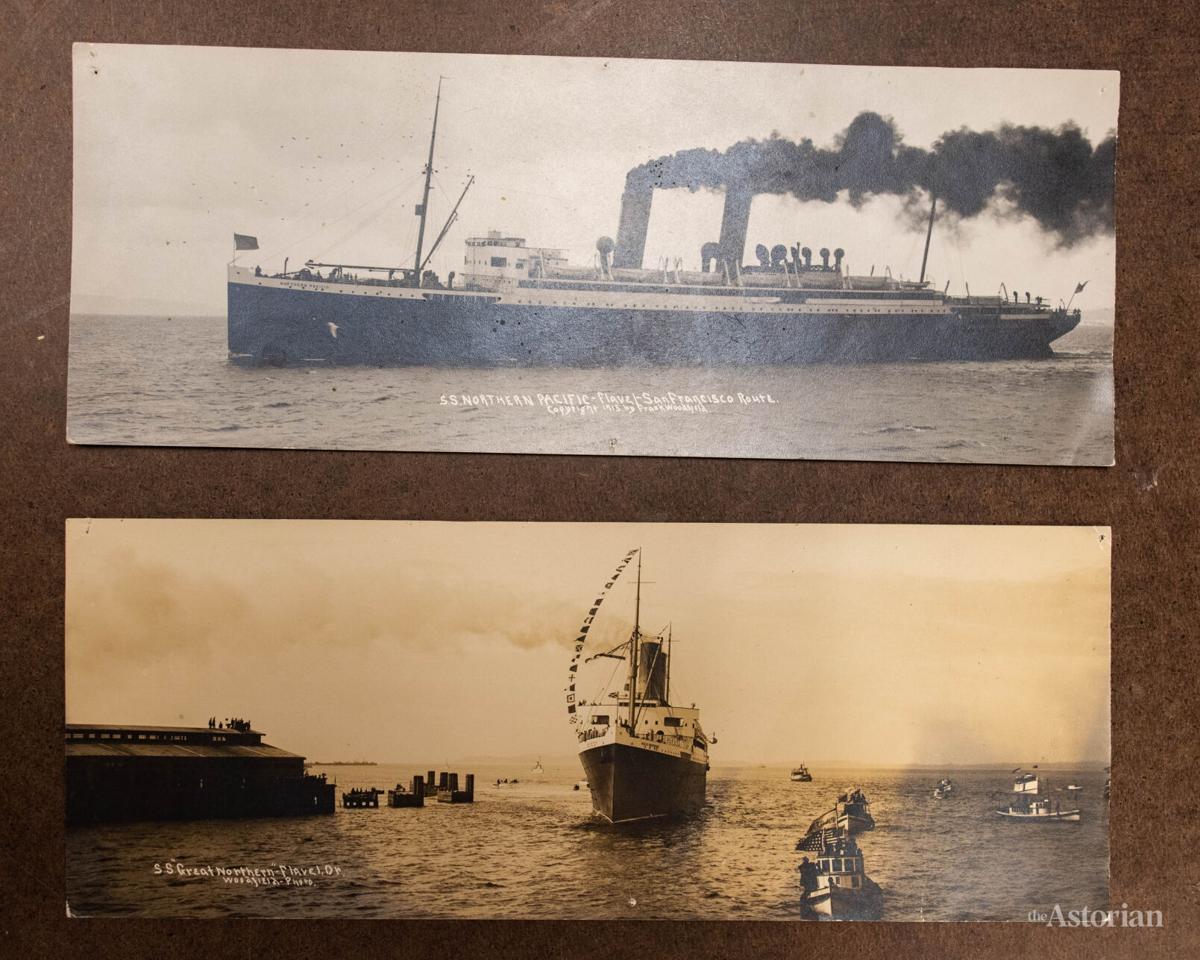 The Northern Pacific, above, and Great Northern were photographed by local photographer Frank Woodfield shortly after they first began their route between Astoria and San Francisco in 1915. 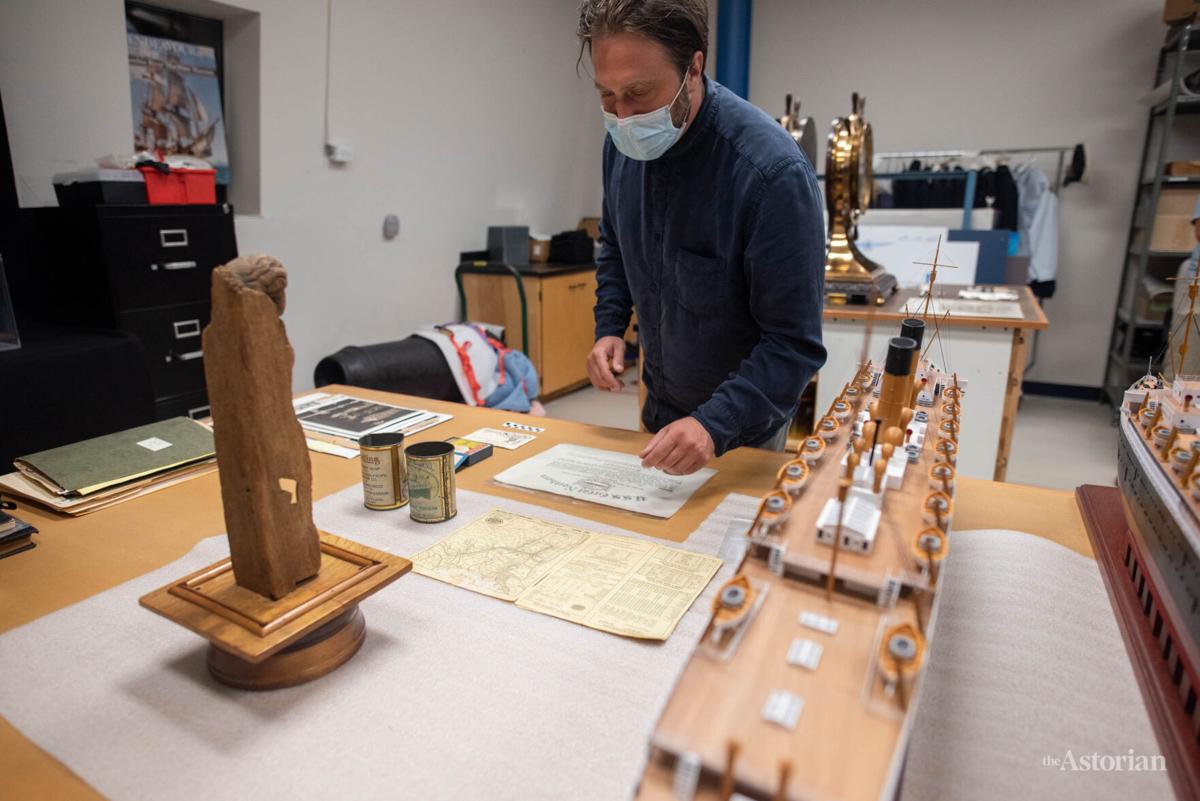 Matthew Palmgren looks over artifacts from the Twin Palaces, which will be included in the exhibit at the Columbia River Maritime Museum. 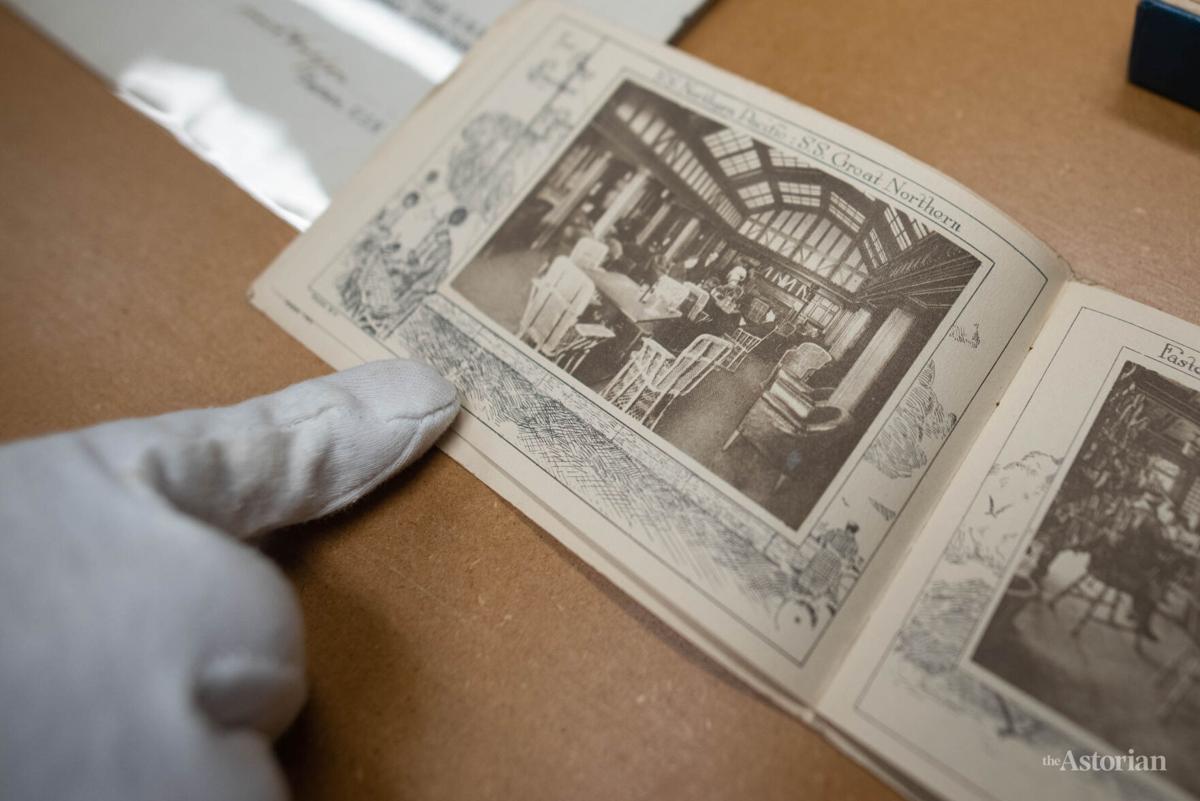 A photo in an original passenger log book shows an ornate room on the inside of the ship.

On March 16, 1915, around 10,000 people gathered to welcome the Great Northern, a palatial high-speed cruiser. The ship had been built, along with its sister ship, the Northern Pacific, to whisk passengers between the former town of Flavel near present-day Warrenton and San Francisco in little more than a day.

The ships were nicknamed the Twin Palaces of the Pacific. But their shuttles between the Columbia River and San Francisco would only last 2 1/2 years before they were pressed into service as troop transports during World War I.

The Columbia River Maritime Museum is planning an exhibit on the ships after receiving twin clocks Astorians had gifted the Great Northern Pacific Steamship Co. in 1915 to honor the new chapter in the region’s development.

Michael Haglund, the president of the Astoria museum’s board of trustees, became intrigued by the vessels and researched Hill and his machinations in the Pacific Northwest for the museum’s quarterly, The Quarterdeck.

Hill was instrumental in promoting the development of the region, attracting settlers on his rail lines and other large investors, such as lumberman Frederick Weyerhaeuser, to whom Hill would sell 900,000 acres of forestland in western Washington that became Weyerhaeuser Co.

“James Hill keenly understood how promoting the development of the lush natural resources of Oregon and Washington would drive the profits and value of his railroad empire, and he focused primarily on farming and lumbering,” Haglund wrote.

In competition with the Southern Pacific Railroad, Hill wanted to further expand his lines from Portland south to San Francisco in time for the 1915 World’s Fair.

After being rebuffed in his attempts to get a right of way — in part by competing railroads lobbying against him — Hill’s Spokane, Portland & Seattle Railway contracted with a shipwright in Philadelphia for two 525-foot luxury cruise liners. At about $2 million each and capable of 23 nautical miles per hour, Hill wanted them to cover the voyage between Flavel and San Francisco in 25 hours.

“You’d get there two and a half hours before the train would’ve, because that was the whole point, ” said Jeff Smith, curator at the museum.

A terminal was built in Flavel, named for the famed bar pilot Capt. George Flavel and located in present-day Warrenton, where an estimated 10,000 people turned out to see the Great Northern arrive in March 1915. An article in the March 17, 1915 Morning Astorian newspaper described the spectacle.

“Passengers crowded to the Great Northern’s inshore rail and handkerchiefs were waved and cheers returned,” the article read. “Doubtless many wondered what sort of port was this that turned out 10,000 souls to welcome the travelers to its shores.”

Dignitaries from Astoria had commissioned two brass and mahogany clocks from the Chelsea Clock Co. that were gifted during the World’s Fair in 1915.

“I do think Astoria recognized this a real economic boon, all these people being brought here, and having the service and having the train and all that stuff,” Smith said. “And it was just a way for the community to say, ‘Thank you, we appreciate you investing in our area.’”

After the war, the Great Northern shuttled documents to President Woodrow Wilson as he was returning from the Paris Peace Conference and later became the flagship of the U.S. Navy at Guantanamo Bay, Cuba.

The Great Northern would join Alexander’s Admiral Lines for the next 15 years, running along the West Coast between Seattle and Los Angeles before being bought out by the War Shipping Administration to ferry troops to Europe during World War II, including in advance of the D-Day invasion of Europe.

But the vessel’s size, unique design and cost of upkeep ultimately led the administration to sell it to the Boston Metals Corp. for scrap in 1948, Haglund wrote.

“In 34 years, perhaps no large vessel homeported for a time at the mouth of the Columbia River was more accomplished or had more nicknames,” he wrote. “That list included not only the Palace of the Pacific and Hot Foot, but also Galloping Ghost of the Pacific Coast and Greyhound of the Pacific.”

Haglund saw the clocks while at the James J. Hill Center in St. Paul and explained their importance to the region, Smith said. When the clocks became available, the center offered them up, and the museum took receipt last week.

Smith referred to them as the “Rolls Royce of clocks.” But the clocks, which chime every half hour and helped keep fresh crews on deck, need work.

Luckily for the museum, Astoria has an antique clock repairer in Frank Van Winkle at Loop-Jacobsen Jewelers. They hope to send one of the clocks out for repair and put it on display next month.

“It’s kind of interesting that they’ve made it full circle,” Smith said. “They started here, and they’re back here again. It just feels really good knowing they’re here, so that Astoria can once again take pride in them.”