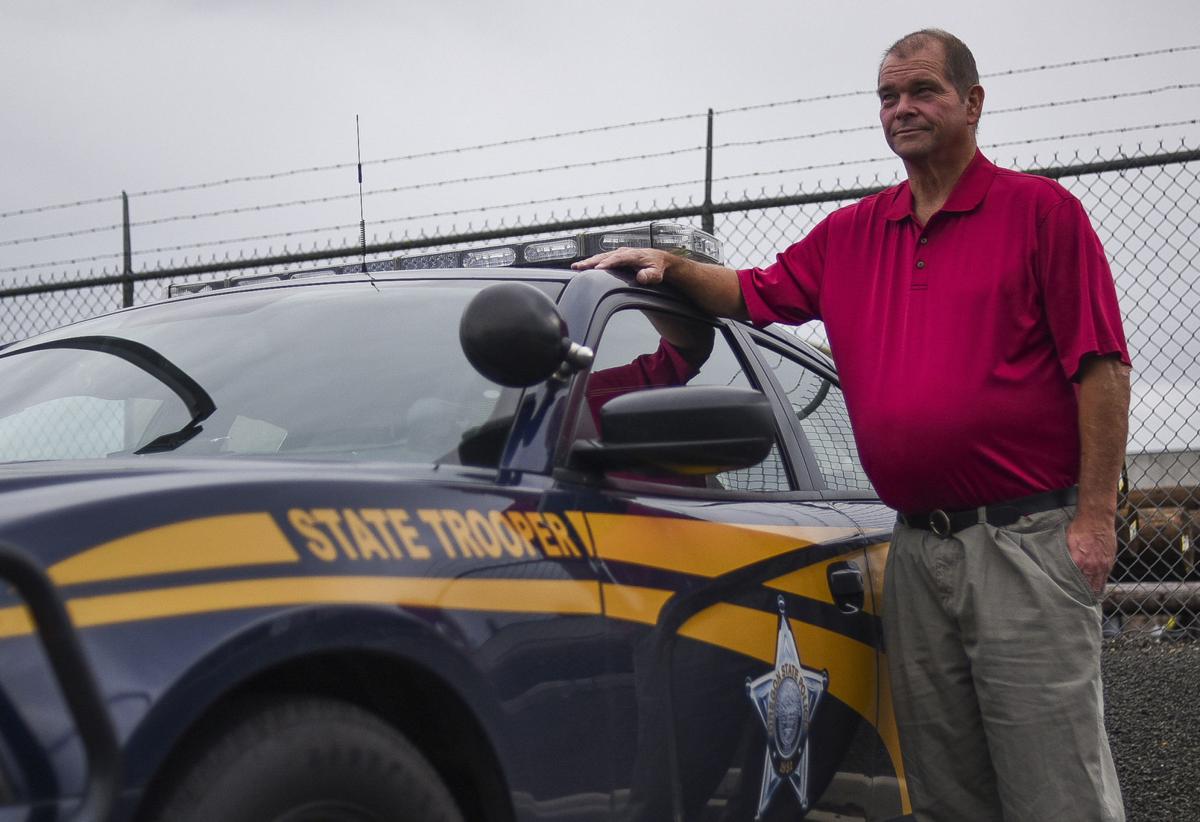 Tom Dyer poses for a portrait next to his former patrol car Friday at the Oregon State Patrol offices in Warrenton. Dyer, who was born and raised in Warrenton, retired earlier this month after 32 years with the force. 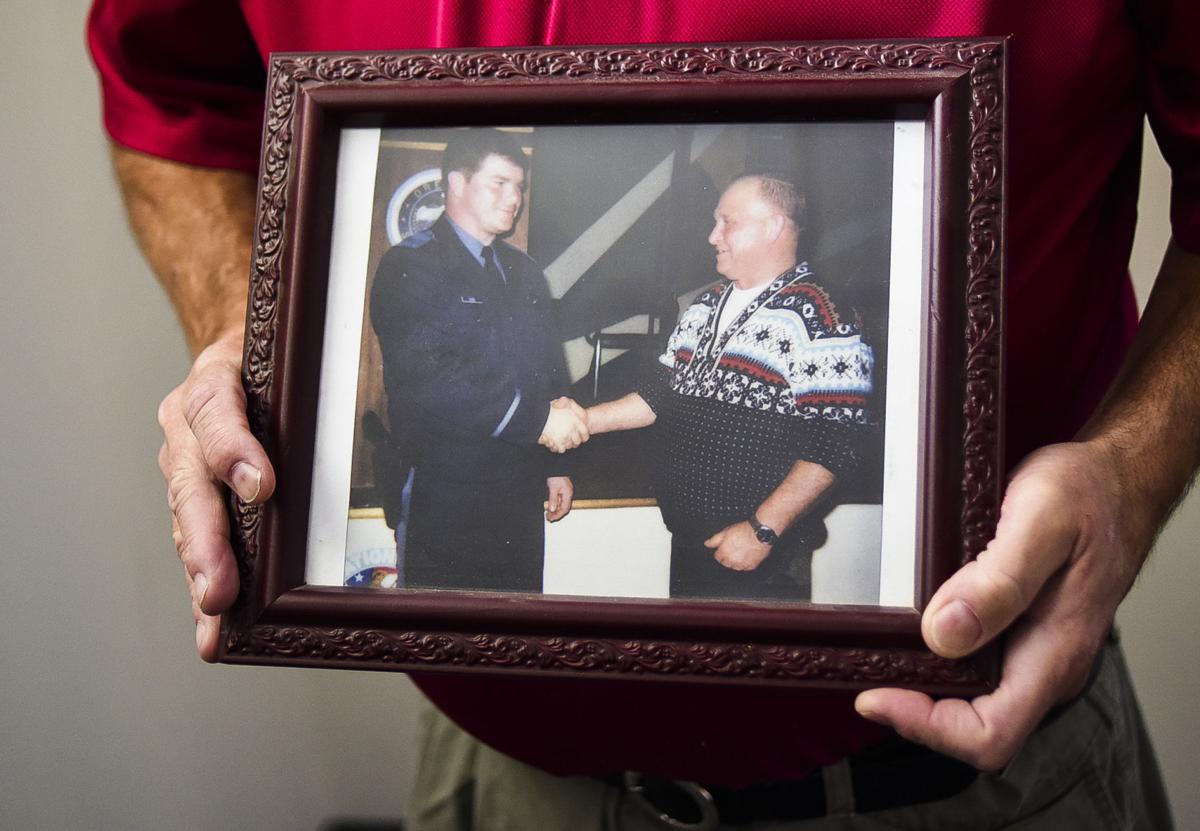 Tom Dyer holds a framed photograph of him graduating from the state police academy at Camp Rilea in October 1984. 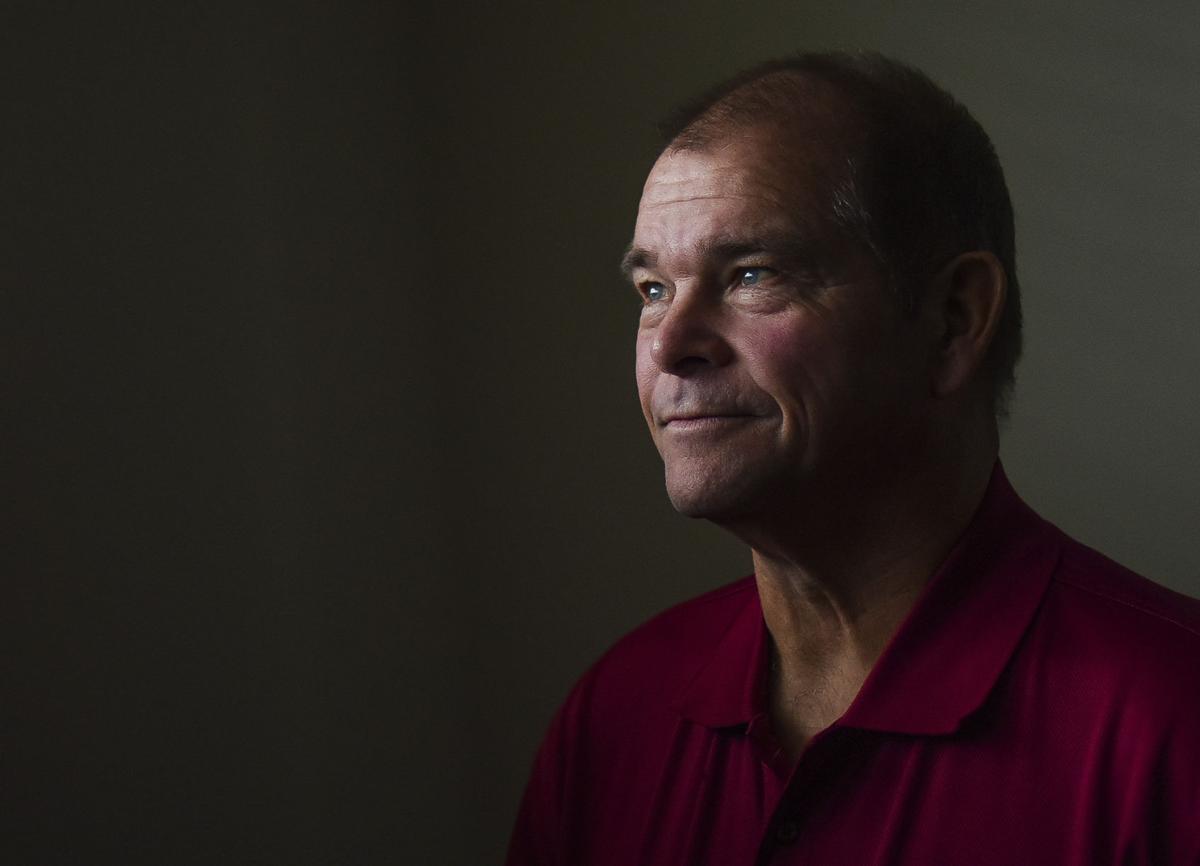 Danny Miller/The Daily Astorian Tom Dyer poses for a portrait on Friday at the Oregon State Patrol offices in Warrenton. Dyer, who was born and raised in Warrenton, retired earlier this month after 32 years with the force.

Tom Dyer poses for a portrait next to his former patrol car Friday at the Oregon State Patrol offices in Warrenton. Dyer, who was born and raised in Warrenton, retired earlier this month after 32 years with the force.

Tom Dyer holds a framed photograph of him graduating from the state police academy at Camp Rilea in October 1984.

Danny Miller/The Daily Astorian Tom Dyer poses for a portrait on Friday at the Oregon State Patrol offices in Warrenton. Dyer, who was born and raised in Warrenton, retired earlier this month after 32 years with the force.

WARRENTON — In 32 years with the Oregon State Police, Tom Dyer, who retired this month, has seen things few people will ever see — and, he said, no one should have to see.

A Warrenton city commissioner running unopposed for his second term, Dyer served with the state agency in Beaverton for about six years, followed by more than 25 at the Astoria Area Command, which now operates in Warrenton. He spent his entire career as a patrol officer.

“You get exposed to every type of crime you can imagine,” he said. “And, by the grace of God, maybe you don’t see some of it. But in a long career, you’re going to see lots of ugly stuff.”

He has seen people burn alive while trapped in a vehicle on a road to Hillsboro. He has pulled bodies from car accidents and other fatal scenes.

“The smells and stuff you just don’t forget. You don’t forget burning flesh and all those types of things that you come in contact with as a cop,” Dyer said.

He has helped remove children from parents who abused and neglected them. (He remembers one household in Knappa where the kids had maggots in their shoes.)

He has never shot anyone, always managed to de-escalate the situation, but he has come close and, he said, would probably have been justified.

In the Portland metro area, he dealt with Crips and Bloods and other gangs.

Subjects have pulled guns and knives on him. He has been punched, bit and spit on. While searching a car in the mid-1980s, Dyer accidentally stuck himself on a needle and developed an autoimmune disease.

He has told dozens of parents, in person, that their child had been killed. One time, he had to break the news to a close friend’s family.

Though Dyer said he has never been overcome by post-traumatic stress disorder, he knows what it feels like when an unpleasant memory gets triggered.

“Sometimes it’s very delayed, because you get so good at compartmentalizing as an officer that it doesn’t hit you when you think it would hit you,” he said. “It hits you when you least expect it.”

Dyer, a genial, even-tempered 56-year-old, has enjoyed a very rewarding career, one that allowed him to help people in their lowest moments.

In Clatsop County, those low moments often arise when people are suffering from drug and alcohol addiction, mental illness or both.

The county, he said, does not have enough facilities to house and treat them.

“It’s brutal, as an officer, because you know there’s no place to put someone where they can get help,” Dyer said.

He said the county jail is not the place for some, because their issues are mental, not criminal. “They may have committed a crime, but that’s not the underlying problem. And so it’s real difficult,” he said.

For Dyer, some of the best times have come when subjects he pulled over or detained for reasons related to drugs and alcohol later seek him out, or send a letter, to tell him that they quit using because of their interaction with him.

“You have an opportunity as an officer to make a difference, if you choose to, because you meet people when they’re hurting, and when they’re really in need. You can either be part of the solution, or not,” he said. “And I had a career where I was able to, most of the time, feel pretty good about making a difference with alcoholics and drug addicts.”

His supervisor, Lt. Andrew Merila said Dyer has received many letters of commendation, more than most cops.

“It really makes the job, all the craziness, well worth it,” Dyer said.

Asked how retirement feels, Dyer said, “It’s really weird, after 32 years of putting a uniform on. You almost feel lost a little bit. I was a little depressed the first week, because I really didn’t want to realize it was over.”

“Part of me is sad, ’cause I really like my job,” he continued. “But part of me knows that it was time for me to go and let the young guys move up and take their leadership role.”

He said his blood pressure has dropped about 20 points because his life is less stressful — “You don’t realize you’re always on guard,” he said — and he doesn’t have to wear the heavy equipment.

Dyer, whose older brother died in a plane crash in the early 1980s, has volunteered to continue doing death notifications.

“I felt honored, even though it was tough, to do those types of jobs, because someone has to do it, and do it in a manner that is compassionate,” he said.

Folks have asked him why he chose to remain a senior trooper rather than seek a higher position.

“My personality is such that I don’t want to tell someone to do something I wouldn’t want to do,” he said, adding: “I knew where my position should be, and I was content with that, and I would do the same thing over again.”

Merila said Dyer often went out of his way to help people, sometimes by giving them a ride or helping them get gas.

“One of our mottos is ‘Service first,’ Merila said, “and I think that’s where Tom shined the most. He exemplifies our tradition of serving the public.”

Dyer, a lifelong Christian, graduated valedictorian from Warrenton High School, and, after college, attended the state police academy at Camp Rilea. He lives in Warrenton with his wife, Ginny, of 34 years. They have two daughters and three sons.

For people looking to go into law enforcement, Dyer advises them to know exactly what they are getting into.

“Police work is for a certain type of person. Not everyone should do it, because it can eat you up and spit you out,” he said.

He recommends that aspiring cops go on ride-alongs, talk to different officers from different agencies, and job shadow someone they respect.

“For someone who has the right temperament and (is) a good fit, it’s a great job,” he said. “But it could be a terrifying one for someone who doesn’t have that fit.”

In addition, they should get a sense of what it’s like to do the job long-term, how it can wear on a person, how it affects marriages.

And, he said, policing is often a lonely job. “You can’t talk about a lot of things — or you shouldn’t, about cases you have,” he said.

Bottom line: Officers who dread going to work should not be on the force, he said. He would not want to work with an officer that’s a “Johnny Law-type,” he said, “because that’s not what police work’s about.”

“You’re a public servant,” he said. “If it’s a power trip, you shouldn’t be doing the job.”