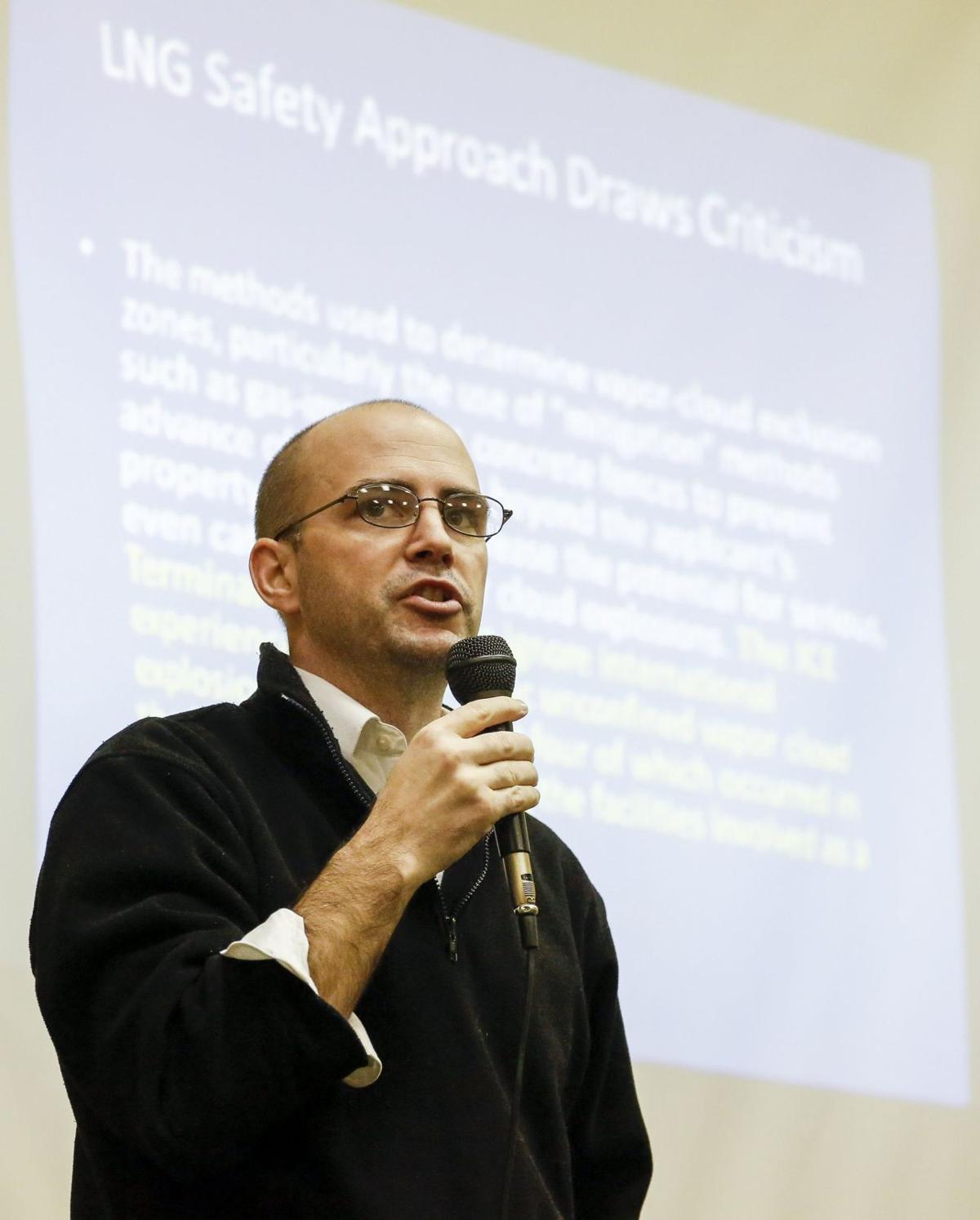 Columbia Riverkeeper's Dan Serres gives a presentation about the dangers of building a liquefied natural gas terminal in Warrenton to a group of protesters and local community members at the Warrenton Community Center Jan. 22. 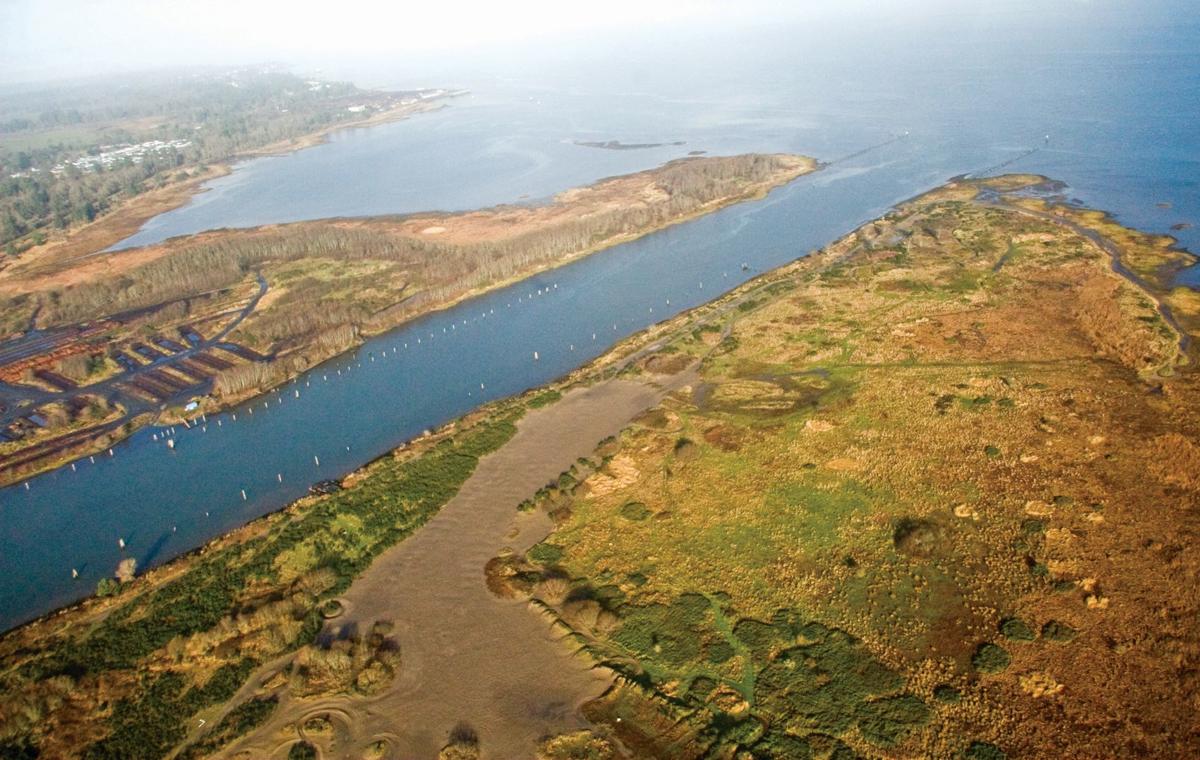 The east side of the Skipanon Peninsula, right, is the proposed location for a liquefied natural gas export terminal to be built by Oregon LNG.

Columbia Riverkeeper's Dan Serres gives a presentation about the dangers of building a liquefied natural gas terminal in Warrenton to a group of protesters and local community members at the Warrenton Community Center Jan. 22.

The east side of the Skipanon Peninsula, right, is the proposed location for a liquefied natural gas export terminal to be built by Oregon LNG.

WARRENTON — Warning of a potentially substantial disruption, the state Department of Fish and Wildlife has recommended that Oregon LNG perform a thorough analysis of the impact of its proposed terminal on commercial and recreational fishing in the Columbia River.

The department, in comments on the project in January to the U.S. Army Corps of Engineers, found that Oregon LNG has not sufficiently characterized the local importance of fishing and the possible disruption during the construction and operation of a liquefied natural gas export terminal on 96 acres along the Skipanon Peninsula.

The department suggests that Oregon LNG “avoid unreasonably interfering, now or in the future, with recreational angling, commercial fishing and shellfishing activities in the Columbia River or any of the other waterways associated with the project.”

The department recommended that Oregon LNG complete a thorough analysis of the potential impact of the terminal, including how safety and security zones around LNG tankers might hinder access. Oregon LNG, the department maintains, “should then identify the steps and actions that will be taken to account for the loss of these recreational and commercial opportunities.”

Oregon LNG did not respond to telephone and email messages seeking comment on the state’s concerns about fishing.

The firm wants to build the export terminal to link the plentiful natural gas of Western Canada and the Rockies with eager energy markets in Asia. A new 87-mile pipeline would run from the Northwest Pipeline, the natural gas artery for the Pacific Northwest, through Cowlitz County in Washington state and Tillamook, Columbia and Clatsop counties in Oregon to reach the terminal.

Oregon LNG is seeking federal, state and local approvals and has encountered significant opposition from environmentalists, property owners, fishermen and residents who have fought the $6 billion project for the past decade.

“Our livelihood survives by our ability to transit and have free passage on the bar, and if you’re shutting down that whole river for periods of time, you’re going to have a negative impact,” said Martin McMaster, an owner of the Lady Laura, a crabber and longliner.

Dan Serres, the conservation director of Columbia Riverkeeper, a Hood River-based environmental group that opposes the LNG terminal, described the conflict between the project and fishing as a “fundamentally unanswered, unresolved problem that has the potential to be enormously destructive to the local economy, to people who fish in the area.”

The Department of Fish and Wildlife’s comments, in a Jan. 16 letter to the Army Corps of Engineers, raised concerns about a dozen topics related to the LNG project, including dredging, fish passage, water use and discharge, wetlands and habitat restoration.

The department “has identified several issues that may result in substantial impacts to fish, shellfish, wildlife, their habitats, as well as potential reductions in opportunities for recreational harvest of fish and shellfish associated with construction and operation of the marine terminal in the marine waters of the lower Columbia River estuary.”

Oregon LNG has acknowledged the extremely popular salmon fishing at Buoy 10, but the department found that the firm has not adequately characterized the potential for substantial disruption of the socially and economically important fishery. Last year, for example, there were 107,700 angler trips with a catch of nearly 84,500 salmon.

Similarly, the department argues, Oregon LNG has not documented the potential impact of the project on recreational crabbing. Crabbers make about 1,500 to 2,200 trips into the estuary a month during the peak fall season, according to the department, taking between 12,000 and 28,000 Dungeness crab a month.

While much of the crabbing occurs outside the Hammond Marina, the department found, some crabbing also happens in the estuary near the proposed berthing dock and outside the mouth of Youngs Bay.