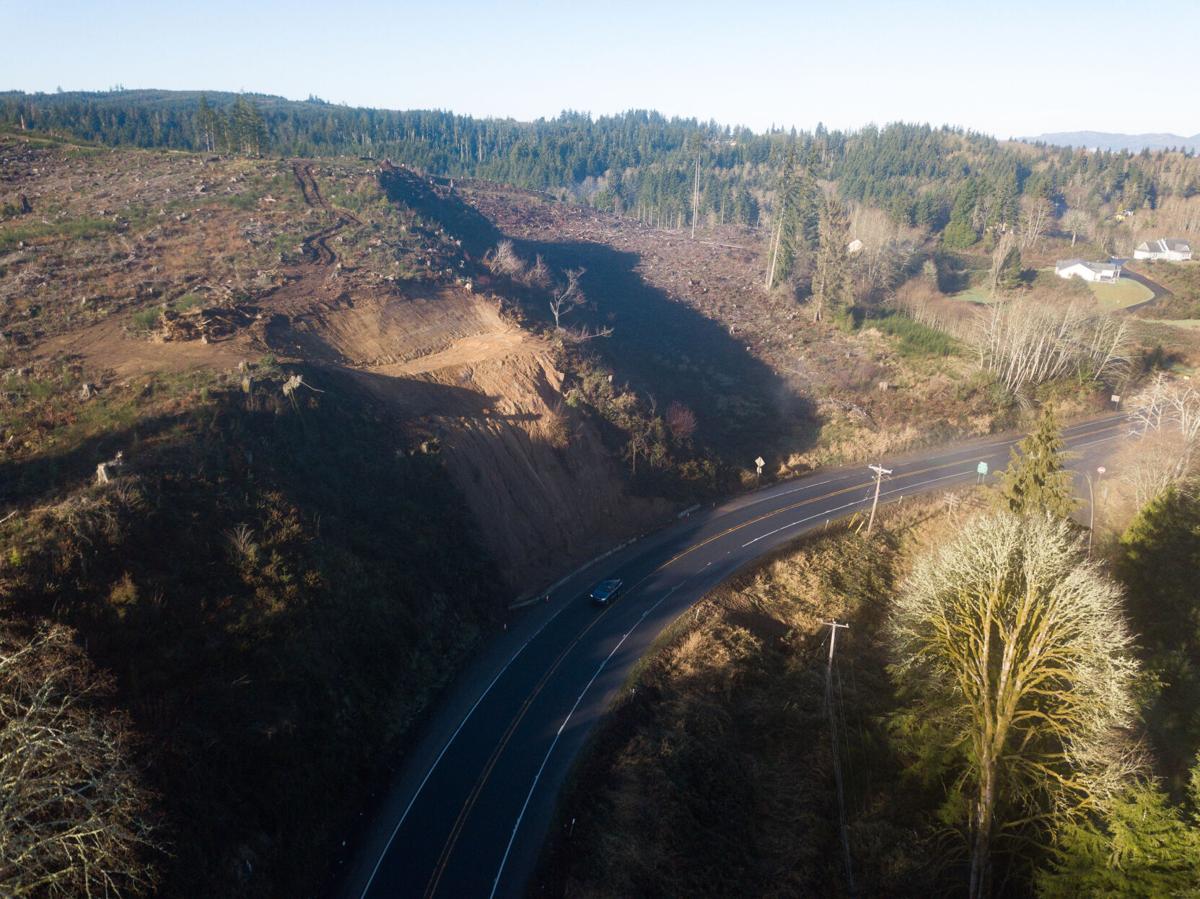 A landslide closed Highway 30 east of Astoria this month. 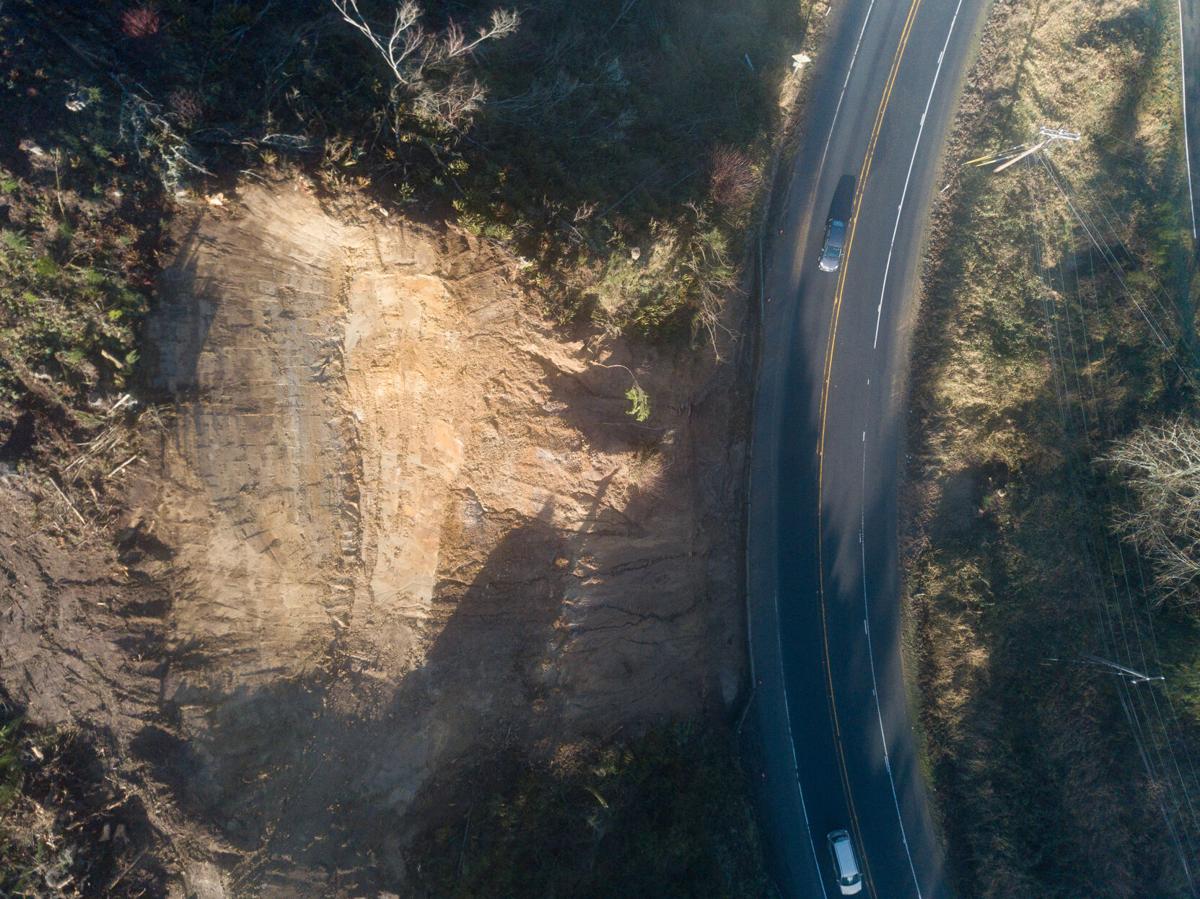 The state weighed the risk of landslides before logging at Area 11 in 2018.

A landslide that shut down U.S. Highway 30 east of Astoria this month appears to have stabilized despite several more days of heavy rain.

Rain is considered the primary trigger for the Jan. 4 slide about 3 miles east of the city that sent a pile of debris onto the road and trapped a passing truck. But some people in the community, including neighboring property owners, point to logging activities they believe left the area vulnerable when winter hit.

A harvest in 2018 cleared trees from the top of the slope down to the road. The area had just been replanted with Sitka spruce, Douglas fir and western hemlock in 2020 — most of them small plugs or 12-inch tall seedlings.

The parcel is one of a dozen units that make up a large piece of property off the highway owned and managed by the Oregon Department of Forestry. In 2017, it was a part of the Boiler Fleet timber sale.

In a report the state made ahead of the harvest, the parcel — Area 11 — was identified as a “high hazard landslide location” for shallow but rapidly moving slides with a risk to the public. The state required foresters to consult with the state’s geotechnical specialist before logging began.

The specialist determined that the slope above the highway should be a “leave area,” with trees left standing to keep the soil stable, but there was another risk to consider, said Ty Williams, the Astoria-based district operations coordinator for the Department of Forestry.

“Do you leave a tree that may stabilize soil or do you cut it if it might fall on the highway?” Williams said.

When these questions arise, the state defers to the owner at risk, the person whose property might bear the brunt of either scenario. In this case, that owner was also the state — the Oregon Department of Transportation. The property was Highway 30.

Normally, when there is logging along a highway, foresters leave a scenic buffer strip along the side of the road. This time, though, the two state departments agreed that due to the orientation of the slope there could be a danger of buffer trees falling across highway lanes during coastal windstorms. Some of the trees were large enough to potentially fall across both lanes of traffic, the state reported. This possibility outweighed the risk of a slide.

The primary tree species that would have been left behind in the buffer corridor were big leaf maple and red alder, “neither of which are strongly desired along highways due to their tendency for phototropism and failure on the highway during wind, snow (and) ice events,” stated a November 2017 letter from the Department of Transportation’s forester to the Department of Forestry.

Homeowners on neighboring and nearby properties said they were not surprised that the area slid. Some had watched harvest operations underway on the hill from their houses. As trees went down, they wondered if there could be problems later.

“It’s unfortunate they logged it the way they did,” said Doug Gisselberg, who lives across the highway from the slide. But, he and his wife, Liz, concluded: “Nature happens.”

They hope the slide is isolated to the one area: the waterfall of dirt they can see beyond their property. To them, the danger feels farther east.

Kendrick George and his wife purchased property to the east of Area 11 and built their house there three years ago. At the time, the state land next door was all tall trees. The Georges thought how nice it was to be backed against forestland. But they did have concerns when the timber sale went through and harvest began.

George recalled thinking, “OK, that’s going to create some issues on this hill.

“And sure enough it did,” he said.

Still, slides happen, he added, especially in coastal areas in the Pacific Northwest. He and his wife had seen smaller slide activity next door at the start of the rainy season this year.

“Once stuff starts growing back it will be fine,” he said.

After the big slide, George spoke to state engineers who came from Salem to evaluate the situation and asked, “Is this going to keep moving towards my property?”

One of the engineers replied, “Geologically speaking, someday the whole hill will come down.”

But geologic time is measured in extensive scales: decades, centuries, eons, George thought. His takeaway from the conversation: Parts of that hill will continue to come down forever.

“I don’t think it’s going to impact my property any time soon,” he said. “It’s got a lot of room in the other direction.”

Hard to pin down

For decades, researchers have looked at the correlation between clearcut logging and shallow landslides. But it can be hard to pin down one main cause for any landslide, particularly in historically unstable landscapes, said Lou Torres, a spokesman for the Department of Transportation.

“We know the human factor can complicate things, but it’s really difficult to make a determination unless you study a particular site,” he said. “We typically don’t do a very in-depth study (afterward).”

The department’s responsibility is the road, he added. “There’s so many uses of land around our roads and we only have so much say in what people do on these properties,” he said.

Area 11 included a small stream, and several springs run through the property. The parcel is in a general area already known to be prone to landslides, Torres said. Also, he added, “we had 3 to 4 inches of rain in about 24 hours … Whenever you have that you have a tendency to see slides.”

Much of Astoria exists in a historical slide zone and landslides can be common on the coast. At the same time the Department of Transportation dealt with landslide debris on Highway 30, state crews were addressing another slide on state Highway 202.

Last week, following more rain and blustery winter days, a landslide pushed a house on Alameda Avenue off its foundation and across the sidewalk. The homeowner believes a leaking city sewer pipe may have contributed to that slide.

Though Area 11 had been replanted, the young trees were not enough to hold earth in place when the rains hit. Now, there are plans to hydroseed the hillside to help with erosion control and the Department of Forestry will have to replant the unit.

The earliest Area 11 could be logged again would be 35 or 40 years from now.

“What the harvest mechanisms will be at that time could be a lot different,” Williams said. “Right now we’re bringing it back to a forested condition.”

The decision to log the slope was the result of a collaborative discussion between the two state departments and their various geotechnical, wildlife and forestry specialists, Williams said. At the time, before the harvest, there was no evidence of recent erosion.

“We did our due diligence,” Williams said. “Prior to harvest it was in our plan for two years.”

The slide was considered “medium-sized” in terms of the volume of material that came down the slope and the amount of work it took to clear.

Torres estimates it could cost the Department of Transportation several hundred thousand dollars in the end. The state budgets money for these types of emergencies and may also be able to access funds through the Federal Highway Administration.

“This is pretty normal stuff for us,” Torres said. “The problem is we’ve had so many abnormally dry winters over the last 10 years … people have sort of forgotten what that’s like living out here sometimes and, really, landslides are a part of it: the flooding, the landslides, the debris flows.”