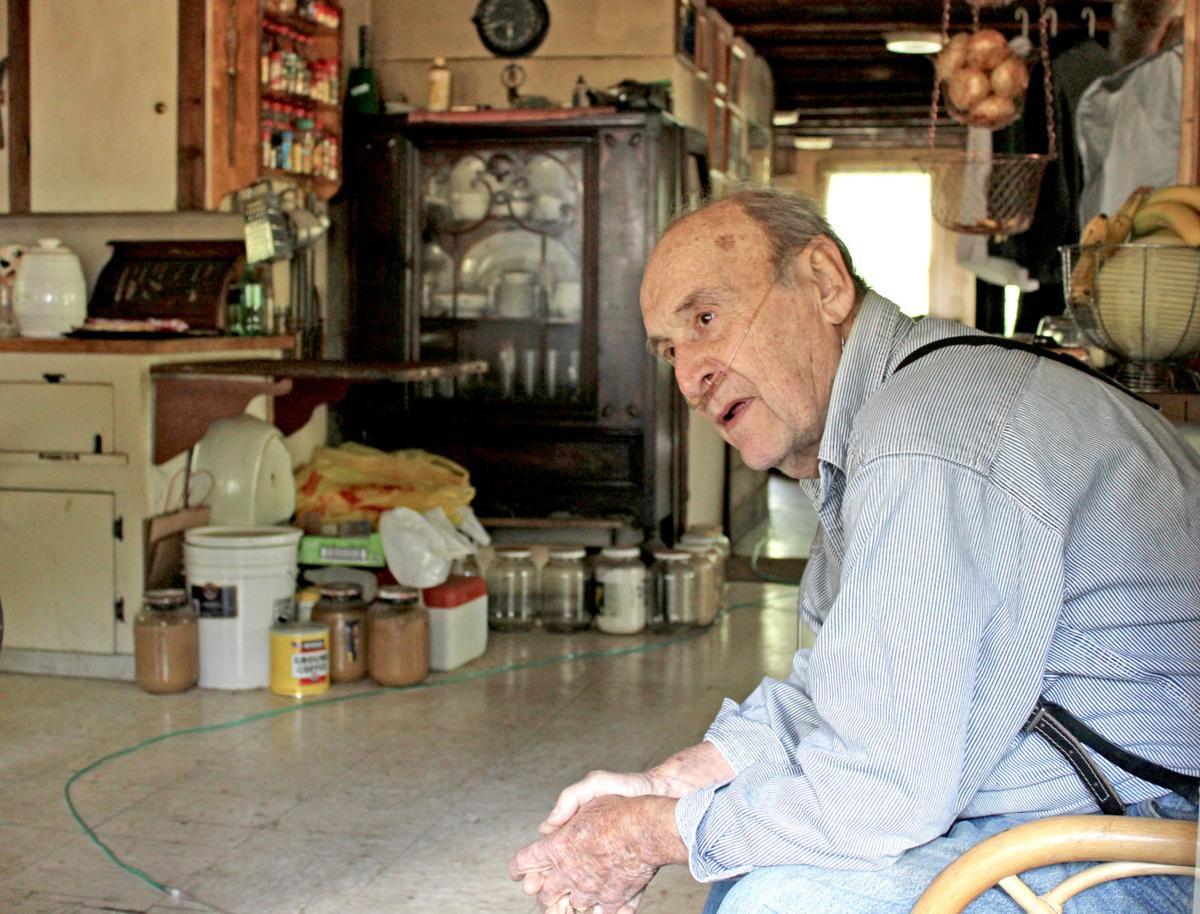 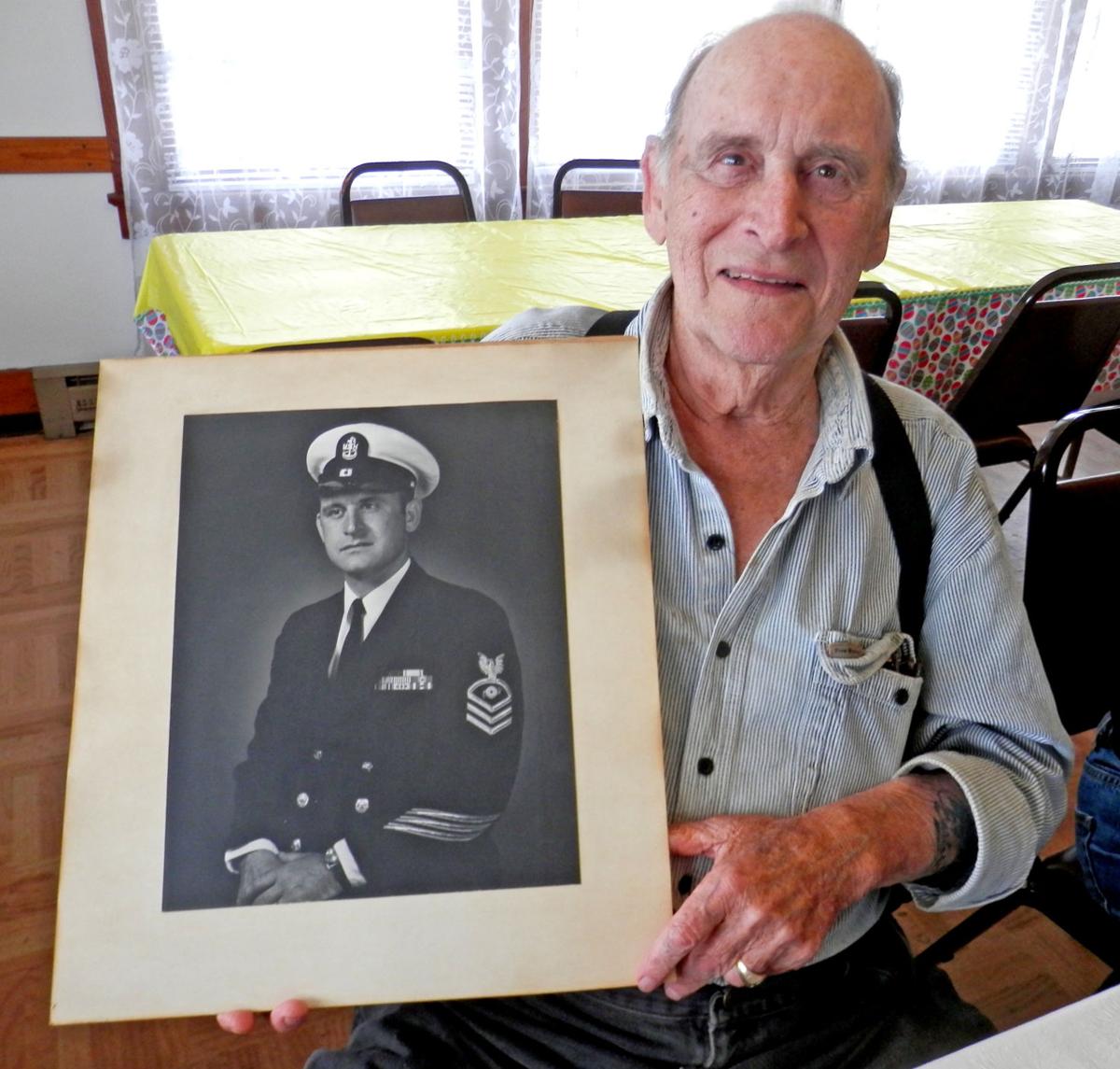 Walt Twidwell, of Brooklyn, is pictured at the Ilwaco Masonic Lodge with an enlarged photo of himself in his Navy uniform. 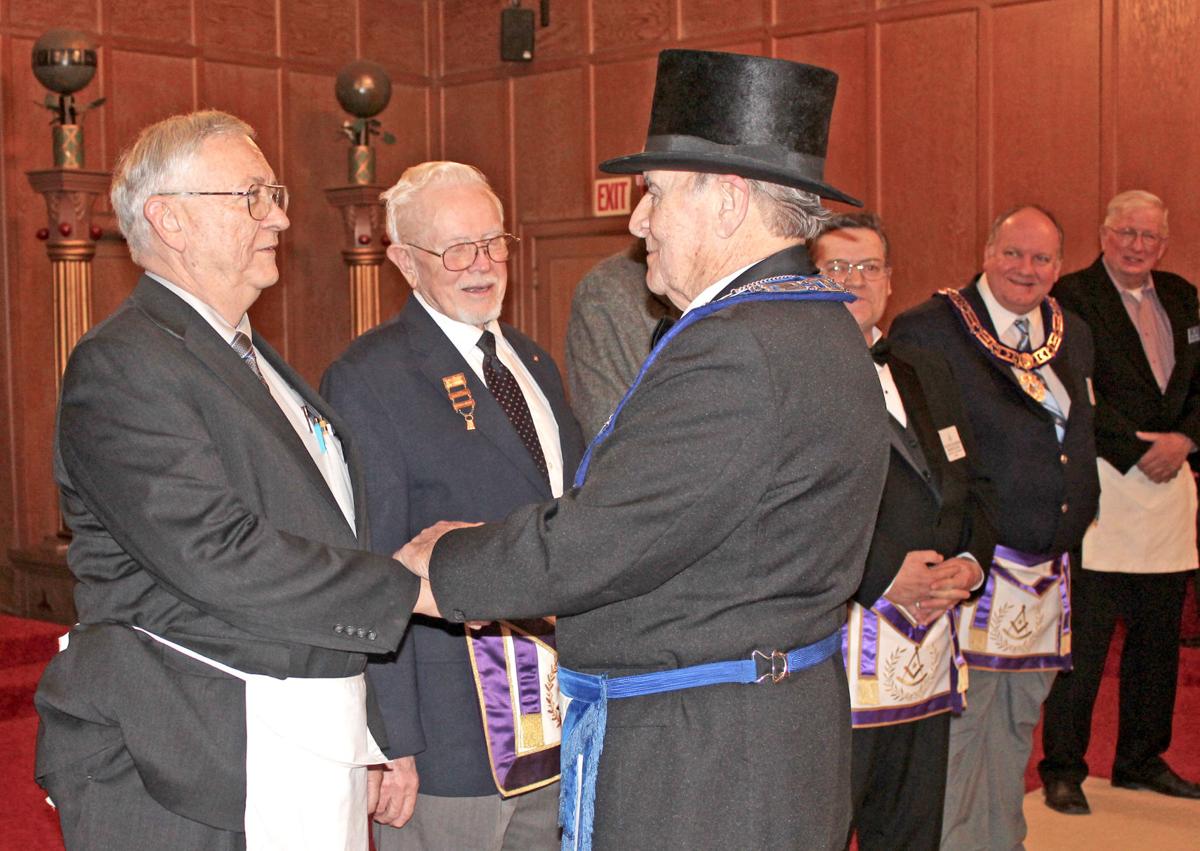 As master of Wynooche 43, Free and Accepted Masons of Washington, Walt Twidwell is the only member allowed to wear a hat in the lodge room in Montesano. 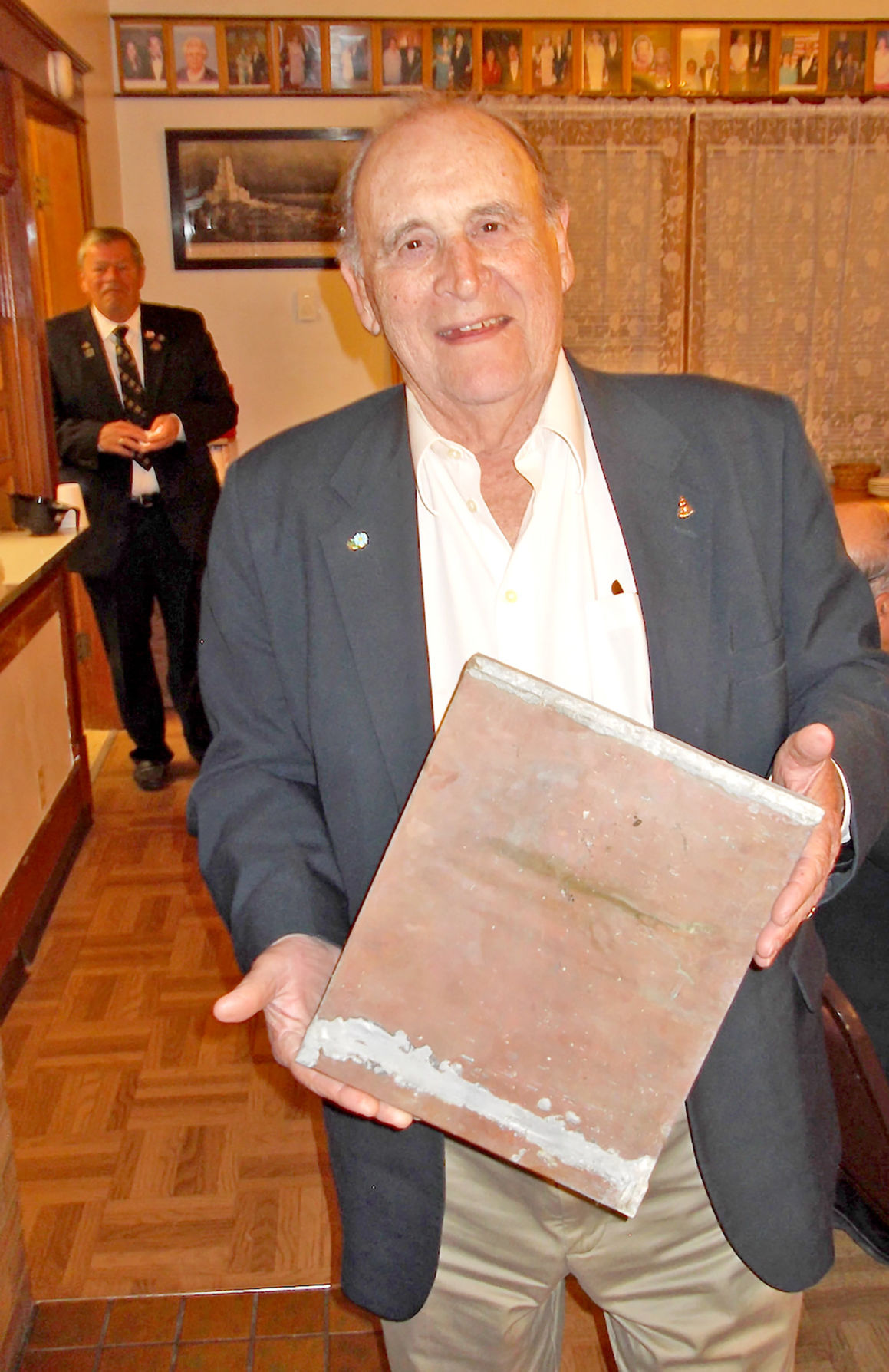 Discovering and opening a time capsule from 1956 inside the old Raymond Masonic lodge when the building was sold after the 2016 merger with Occident 48 in Ilwaco was a highlight of Twidwell's recent Freemason activities. 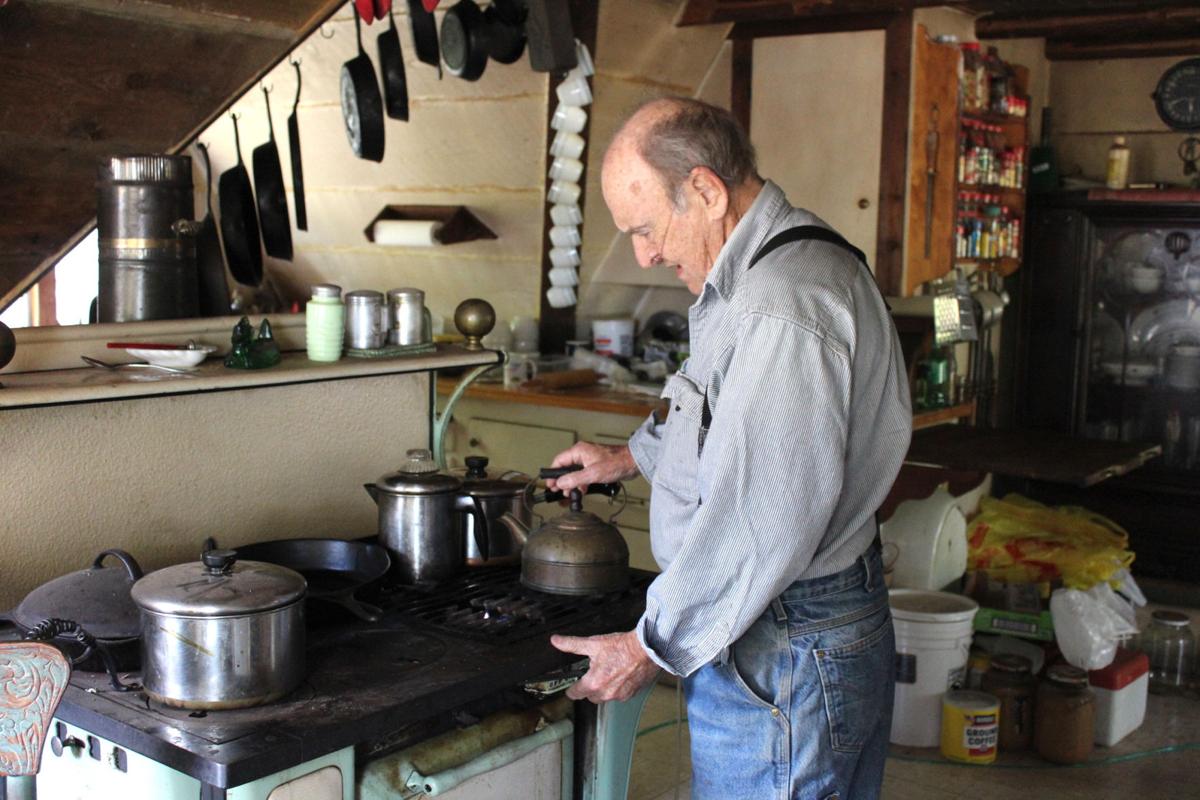 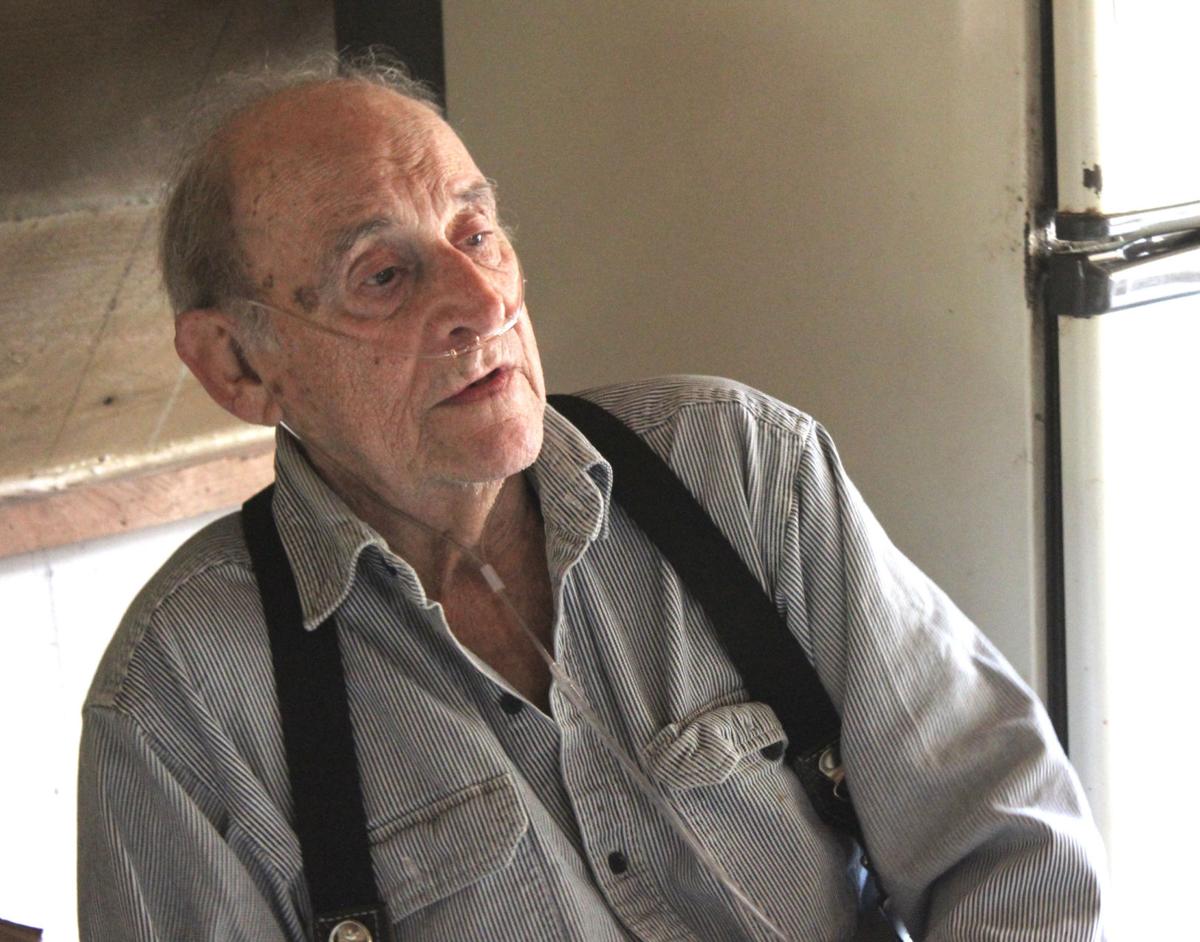 Walt Twidwell, of Brooklyn, is pictured at the Ilwaco Masonic Lodge with an enlarged photo of himself in his Navy uniform.

As master of Wynooche 43, Free and Accepted Masons of Washington, Walt Twidwell is the only member allowed to wear a hat in the lodge room in Montesano.

Discovering and opening a time capsule from 1956 inside the old Raymond Masonic lodge when the building was sold after the 2016 merger with Occident 48 in Ilwaco was a highlight of Twidwell's recent Freemason activities.

When an octogenarian is ailing, it’s a tad unfair to label him a curmudgeon.

One exception lives in the woods of northern Pacific County, Washington.

But now when the 81-year-old grumbles about something, he has just cause. The old sailor has mesothelioma — terminal cancer caused by prolonged exposure to asbestos.

Twidwell was a boiler tender and fireman for the Navy. His nearly 20 years in uniform began in the aftermath of the Korean conflict and lasted through Vietnam. He conducted maintenance and repairs in the engine and fire rooms of seven vessels ported in New York, California and Washington between 1954 and 1973.

During that time, Twidwell was exposed to asbestos dust released from the manipulation of gaskets. After a three-week trial last month, a New York jury retired for just two hours before awarding him $40.1 million in compensatory damages.

For a young person in the prime of health, that fortune could buy a lifestyle of world travel, luxury boats and fast cars.

But Twidwell doesn’t move fast or far these days.

Two quarts of fluid has been drained from his lungs.

Attached to a industrial-sized oxygen tank by a thin green tube that snakes 20 feet or more across his wooden floor, he is home.

Preparing for the end.

And the New York bar association website reports that the defendant, Goodyear, is filing an appeal.

Mesothelioma has a latency period of 10 to 50 years. Last year, the Brooklyn resident experienced shortness of breath and a cough. Doctors made the diagnosis after an X-ray revealed a mass in his right lung.

In the 17 months since, he has deteriorated. “More and more and more, I’m having to rely on people to help me and that’s what hurts,” he told lawyers during his trial testimony.

The dangers of asbestos have been known since the early 1900s. Lawyers argued that the manufacturer, Goodyear, knew of the hazards as early as 1939, but never warned anyone.

Twidwell testified for 14 hours over two consecutive days, beginning each session with a prayer for strength. He credits his discipline memorizing Freemasons’ rituals in assisting his recall of details from decades past. An opposing lawyer, seeking to cast doubts on his memory, asked him to recite a Bible verse; the regular attendee at North River Christian Church was word perfect.

“While no amount of money will give Walter back his health, this result is fair compensation for his loss of his self-reliance and dignity,” said his attorney James Kramer, announcing the verdict.

Mike Carmel of Long Beach, past master of the Ilwaco lodge, flew to the East Coast to testify on Twidwell’s behalf. His admiration for his buddy is evident.

“He shoots his own food, catches his fish, grows his vegetables and cuts wood,” Carmel said. “He is like a homesteader, but with some modern advantages — although he built his house with hammer and saw and no electric tools.”

Twidwell was born in 1937, the son of a logger. He remembers logging camps packed with 500 men; now his North River Valley is home to barely 60 residents. An early memory was his grandfather’s angry disbelief announcing the Pearl Harbor attack when Twidwell was four.

The oldest of four brothers (a sister died), Twidwell had a tough childhood. “Dad was proud of the kids, but when he disciplined you … you knew your ass had been kicked.”

Eager not to become a logger, the teenager joined the Navy in 1954 just as the Korean conflict was winding down, serving on an aircraft carrier, Franklin D Roosevelt (CVA-42), and two destroyers, the Gurke (DD-783) and Zellars (DD-777).

“I was not afraid to get dirty, even as a chief petty officer,” he said. “I put my ‘grubbies’ on. I was a hands-on chief.”

For nine years he sailed back and forth to Vietnam, serving seven years on the East Coast. Highlights included a brief stop in Plymouth, England, and a 1958 visit to Odessa in the Soviet Union.

“You would go ashore, four or five together on the buddy system,” he recalled. “People would invite you into their homes for dinner — they were bitching about their government the same way we were about ours.”

In the 1970s, antiwar protesters did not differentiate between opposition to American foreign policy and those who served in uniform. “Didn’t like getting spit upon,” Twidwell said, recalling it happened at least twice. “You spit on me, the fight’s on!”

When Chief Petty Officer Twidwell retired in 1973, he sought jobs at steam plants touting his Navy training, only to be rejected as too expensive to hire.

His fall-back job was inevitable.

He married twice and had five children, losing one daughter some while ago. He spent years of his adult life in Poulsbo, before returning home alone.

For two years, he lived in a camper on his 110 acres. “When I came in here there was nothing but brush. I had to start from scratch,” he said, gesturing around his house where ornate baskets of onions hang from the ceiling, jet-black iron skillets fill an orderly line of nails and a Winchester rifle lays across the bed.

There is no electricity, though he installed solar panels before it was fashionable. Water comes from a nearby spring and his stove is fueled by propane and wood; until recently, he split every log. Outside, his 6-year-old Dachshund, Hiram, greets visitors with a yap.

“I wish I could have passed on this ‘pioneer way’ to my kids. I taught them to dig clams, they liked that. But things like splitting cedar planks, they didn’t want any part of it. It bothered me.”

Twidwell joined the Freemasons at age 48; his ritual work is conducted in a gravelly, soft-spoken style.

Just before Christmas, he was installed as master of Wynooche 43, a tiny lodge in Montesano 27 miles from his home. Two of the most senior members from the Washington Grand Lodge attended. He presented multiple fruit pies to his guests, a trademark gift.

“I like cooking,” said Twidwell, who shoots his own venison and catches fish in a creek out back. “I got tired of asking the neighbor lady to make me a pie. I used to take her apples, but I soon figured it out.”

It is his eighth year wearing the master’s hat. He has led his “mother lodge,” Aberdeen 52, twice, served an unprecedented three consecutive years at the helm in Ilwaco, and twice led Gavel 48 in Raymond, a lodge that joined forces with Ilwaco in 2016 after its membership dwindled. He is a member of the Shriners, plus six other groups with Masonic connections.

“It’s for the grin on the kids’ faces,” Twidwell commented on the rewards. “It gives them a challenge in life — ‘If I read all those books, I get a bicycle.’ It’s just a good warm feeling.”

He taught Banas how to operate a chainsaw and hunt for mushrooms, and gave him guided tours of logging roads when the western Pennsylvania native became his neighbor in 1994. “He could point out where certain buildings were once located, when they maybe burned down, were abandoned, or torn down,” Banas said.

“When it comes to Masonry, Walt is encyclopedic in his knowledge of the fraternity. He was most often the ‘go-to guy’ when a brother passed away and we needed a Masonic funeral service,” said Banas, who frequently assisted as Twidwell’s Bible bearer.

While many fraternities perform similar community work, Freemasons believe what sets them apart is their ancient rituals, which allude to ancient guild stonemasons who built the Gothic cathedrals of Europe. The three degrees contain lessons that take symbols from architecture designed to help “good men become better,” building character on solid moral foundations, being forthright, honest and equal — “on the level.”

Twidwell has performed just about all of the rituals, and his patriotism is evident in his rigid flag salute. “I wouldn’t want to live anyplace else,” said the well-traveled sailor. “We have got our problems, but we have still got our freedoms.”

In recent years he has become especially keen to give the “apron lecture,” a recitation that explains to a newly initiated brother why a white lambskin apron is considered “an emblem of innocence and the badge of a Mason.”

Many lodge members are buried with theirs.

The ritual states: “Let its pure and spotless surface be to you an ever-present reminder of a purity of life and rectitude of conduct, a never-ending inspiration for nobler deeds, for higher thoughts, for greater achievements; and when at last your weary feet shall come to the end of life’s toilsome journey, may the record of your life and actions be as pure and spotless as this fair emblem.”

Now the old sailor is about to voyage to that “undiscovered country from whose bourn no traveler returns.”

Twidwell’s strong faith in an afterlife makes him unafraid. In refusing chemotherapy, he has gambled that his final days would be more endurable.

“Your body will tell you,” he said, recalling a frank-talking appointment with doctors. “I want to go easy. I don’t want to go hurting. We all gotta go!

The apron ritual concludes, “And when your soul shall appear before that Great White Throne, there to receive judgment for the deeds done while here on Earth, may it be your portion to hear from Him who sitteth as the Judge Supreme, ‘Well done, good and faithful servant! Enter thou into the joy of thy Lord.’”

Twidwell has had four score years to imagine that moment.

When the time comes, Twidwell’s funeral will be standing-room-only. Like-minded men will help fasten each other’s Masonic aprons, then don the traditional white gloves of mourning. A lodge brother will recite that ancient graveyard oration that Twidwell has done countless times.