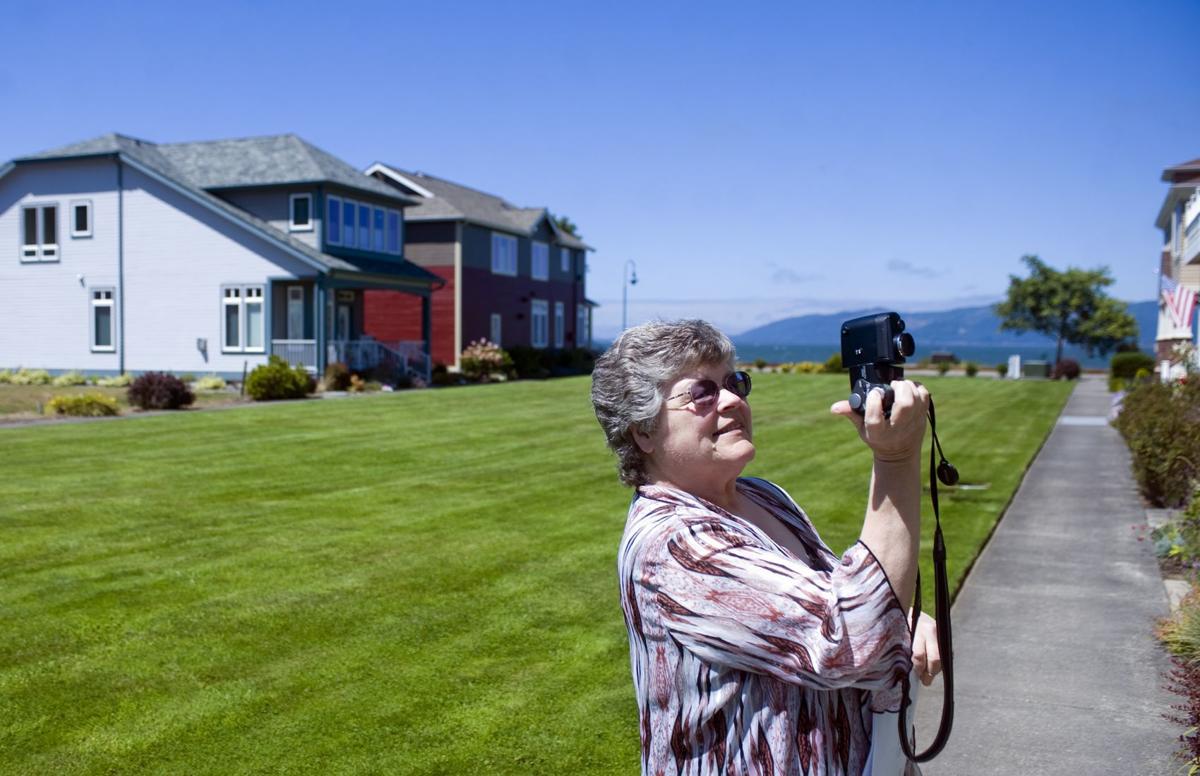 Astoria City Planner Rosemary Johnson conducts an inspection of homes in the Mill Pond neighborhood Wednesday. She will be retiring Sept. 1 after 35 years working for the city of Astoria. 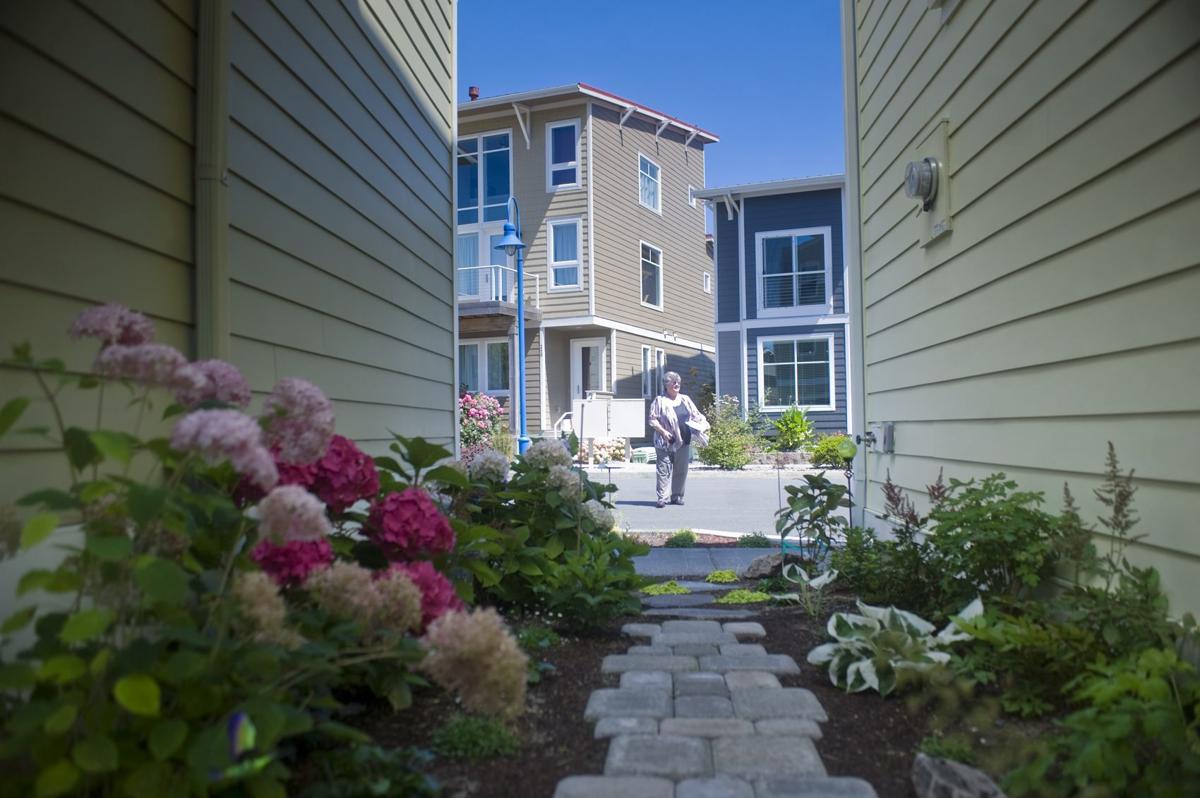 In her 35 years working with the city of Astoria, City Planner Rosemary Johnson has helped reshape the Mill Pond neighborhood and Astoria Riverwalk. 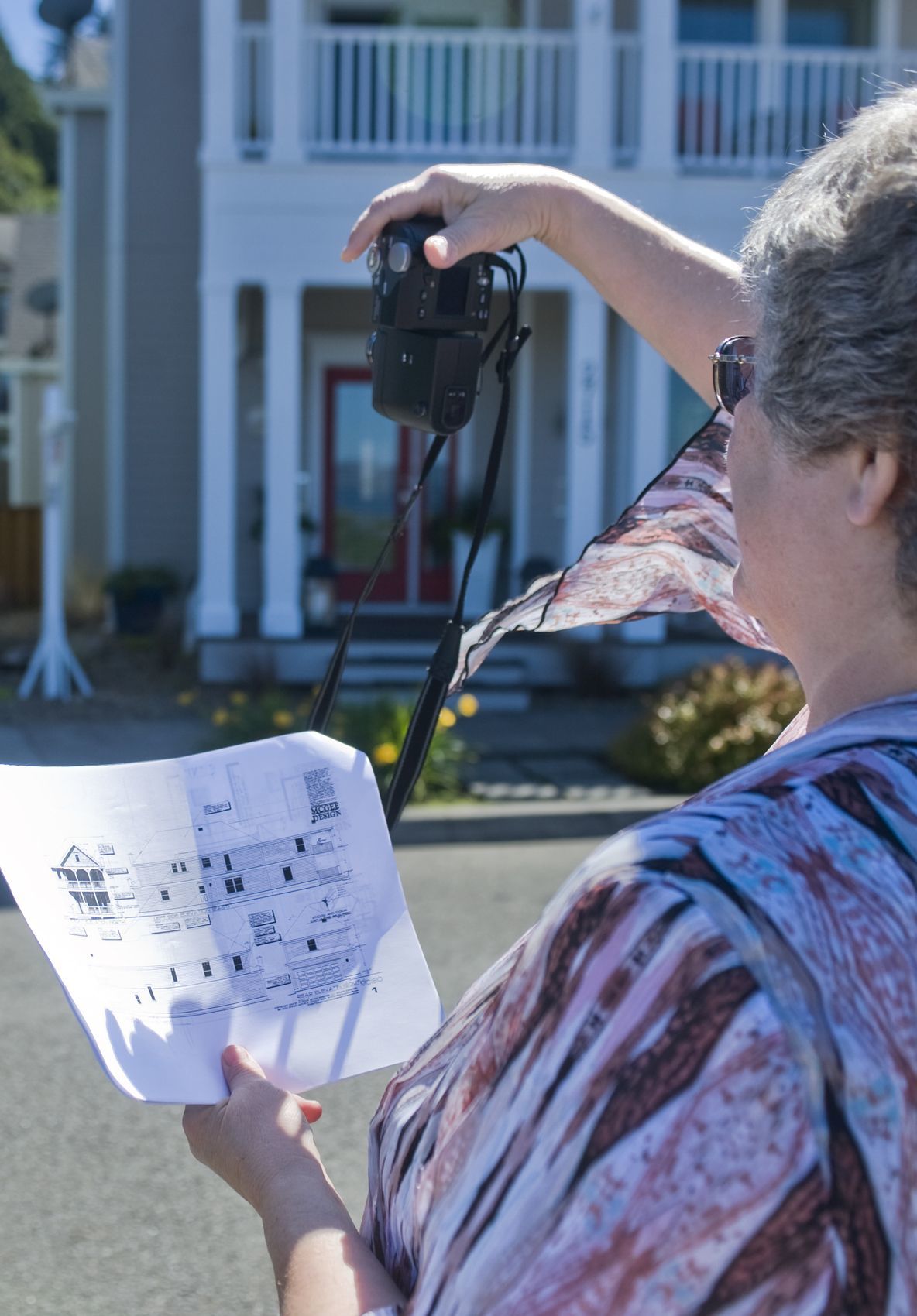 Astoria City Planner Rosemary Johnson uses a camera to snap a photo of exterior details of a Mill Pond Village home during an inspection Wednesday. Johnson will take the photos back to her office at city hall to see if they match up with the builder's design plan and are compatible with the neighborhood.

Astoria City Planner Rosemary Johnson conducts an inspection of homes in the Mill Pond neighborhood Wednesday. She will be retiring Sept. 1 after 35 years working for the city of Astoria.

In her 35 years working with the city of Astoria, City Planner Rosemary Johnson has helped reshape the Mill Pond neighborhood and Astoria Riverwalk.

Astoria City Planner Rosemary Johnson uses a camera to snap a photo of exterior details of a Mill Pond Village home during an inspection Wednesday. Johnson will take the photos back to her office at city hall to see if they match up with the builder's design plan and are compatible with the neighborhood.

There’s only one woman in the city of Astoria who has been involved in the town’s most vital tasks of reshaping – taking historic preservation, the riverfront and the Mill Pond site to what they are today.

She’d never admit it, modestly sharing her hard-earned credit with a team of equally important staff members, but she’s been responsible for some of Astoria’s most prominent features for the everyday citizen and tourists alike.

She is Rosemary Johnson.

Johnson has worked for the city of Astoria for the last 35 years. And after a long list of accomplishments, she’s ready to hang up her hat.

“I’ve been saying for the last six years or so that I was going to retire soon and now I am finally doing it,” Johnson said.

Johnson will continue to temporarily work for the city of Astoria post-retirement until a new planner is found to fill her shoes.

But then, it’s freedom, time with her family and travels across the country.

“I just kept putting it off, but I wanted to retire while I am still young enough to travel with my husband and see the country,” she said. The Johnsons have been married for 40 years.

Johnson’s husband, Curt, retired from the parks service in 2001 from Fort Clatsop and now works to restore their 1880 home. The two enjoy Civil War history and plan to check out the many sites on the East Coast during a three-month road trip. Their other stops include visits with family – and Disney World, a place the couple first went as an engaged couple.

“It’ll be just the two of us,” she said with a smile. “I’m a big Disney buff and a big history buff, mostly World War II and the Civil War. So it’ll be a nice trip, without any commitments or any schedule, and just go. We can stop when we want to, and see what we want to see.”

The Johnsons have two sons, Sean and Chris. Chris has two daughters and lives in California; Sean, a veteran of the U.S. Army, is a police officer in Cannon Beach and has a newborn son.

“My job has taken me from my family for many years,” she recalled. “I missed so many birthdays and anniversaries when my kids were growing up. And I didn’t have a choice. My job has night meetings… .”

She will miss her job, too. “This job has been really great. Since the day I started I have been fully immersed in the community. And involved and knowing what’s happening,” Johnson said. “And it’s great knowing that you were involved in something that people love and enjoy today.”

The Riverfront is a good example of that, as well as nearly all of the city projects that have happened in the last several years.

The Johnsons moved to Astoria from Death Valley, Calif., in 1979. Born in Baltimore, Johnson lived there until she was 21, before moving to a small county in Virginia with her parents. With a traditional German upbringing, Johnson recalls, she lived with her parents until she was married. She met her husband while the two were working for the parks service there. They later relocated to Death Valley.

After the family moved to Astoria, Johnson applied for a position with the city as a parking enforcement officer, because in those days, husbands and wives could not work together in the parks service. As an employee of the city, Johnson worked in that position for more than seven years before she was hired to work in administration for human resources and planning. When those two departments divided, Johnson stuck with planning, the part of the job that interested her the most. Paul Benoit, who served as the community development director at that time before eventually becoming the city manager, was a great supervisor, Johnson said.

“He helped me to grow, and I learned so much from him, and he taught me a lot. Until one day he said, “I think you’re ready,’” she said.

More than 13 years ago, Johnson became the planner.

Despite Johnson’s success and career growth, she said she always felt less than, because she didn’t have a college degree. She took classes, including night school while working full-time and raising two children, but never graduated. However, her life choices and career became that much more meaningful when the American Association of University Women honored Johnson during the Astoria Bicentennial as one of 100 women who helped make Astoria what it is in the last 200 years.

“I always felt bad that I didn’t have a college degree and I always felt like something was missing, that I was not as smart as everybody else,” she said. “It was always a sore spot with me. So getting that honor from them basically validated me and my life. And it was OK that I didn’t have a college degree, that I could still be somebody and do something, accomplish something.”

Johnson said she still plans to be involved in the community. She isn’t sure how, yet, but she plans to volunteer.

Aside from the trip, she said she’s looking forward to having “me time.” An avid scrapbooker, she also enjoys being with her family. She said she’ll miss having her finger on the pulse of the community, but is ready for her next chapter.

“All my life I have wanted to be remembered,” she said. “Knowing that I will be remembered for my involvement in the community, for an impact that I may have made, that’s really important to me.”

‘It’s great knowing that you were involved in something that people love and enjoy today.’

Refreshments provided; all are welcome to attend