Thousands of people attended a #TimberUnity rally in Salem on Thursday. 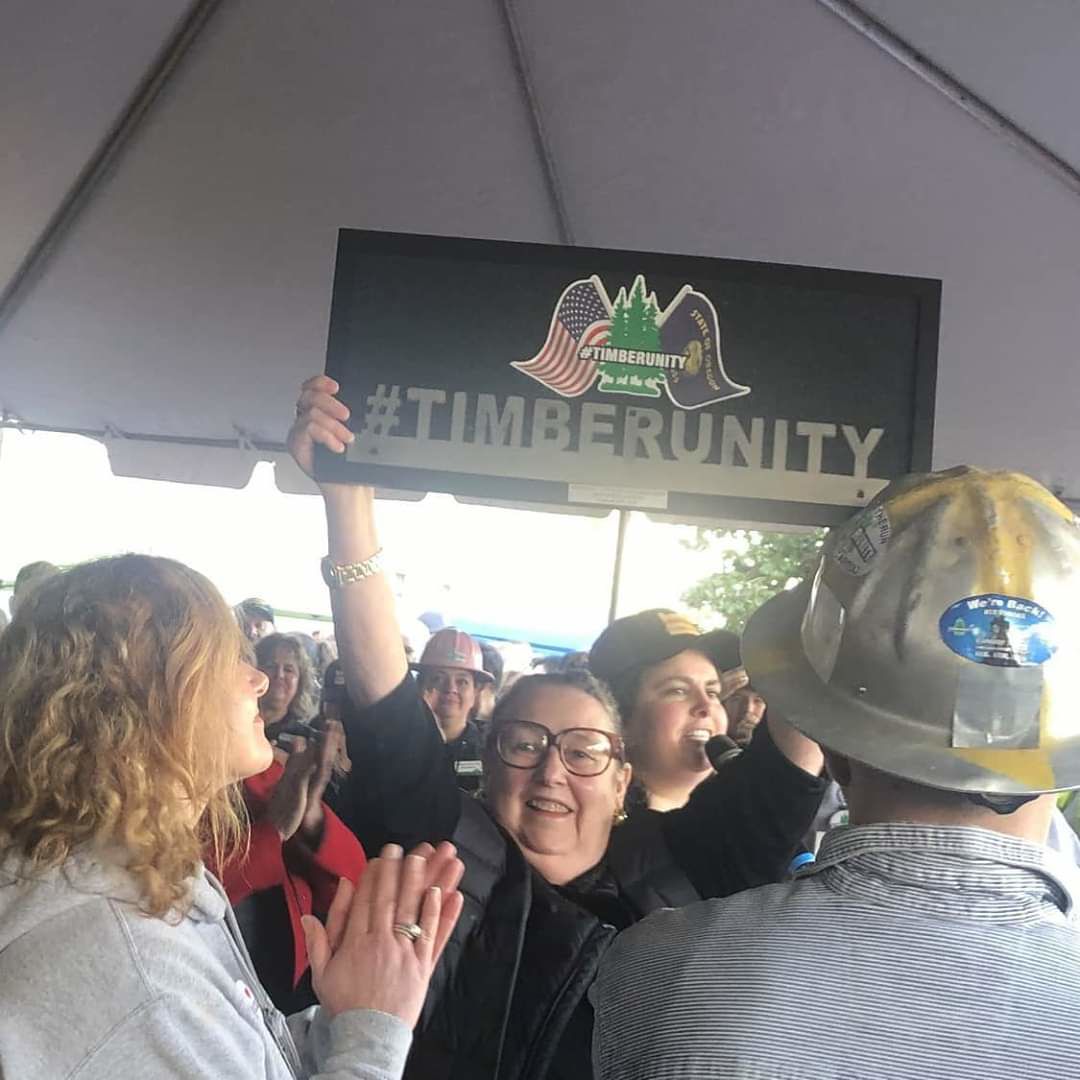 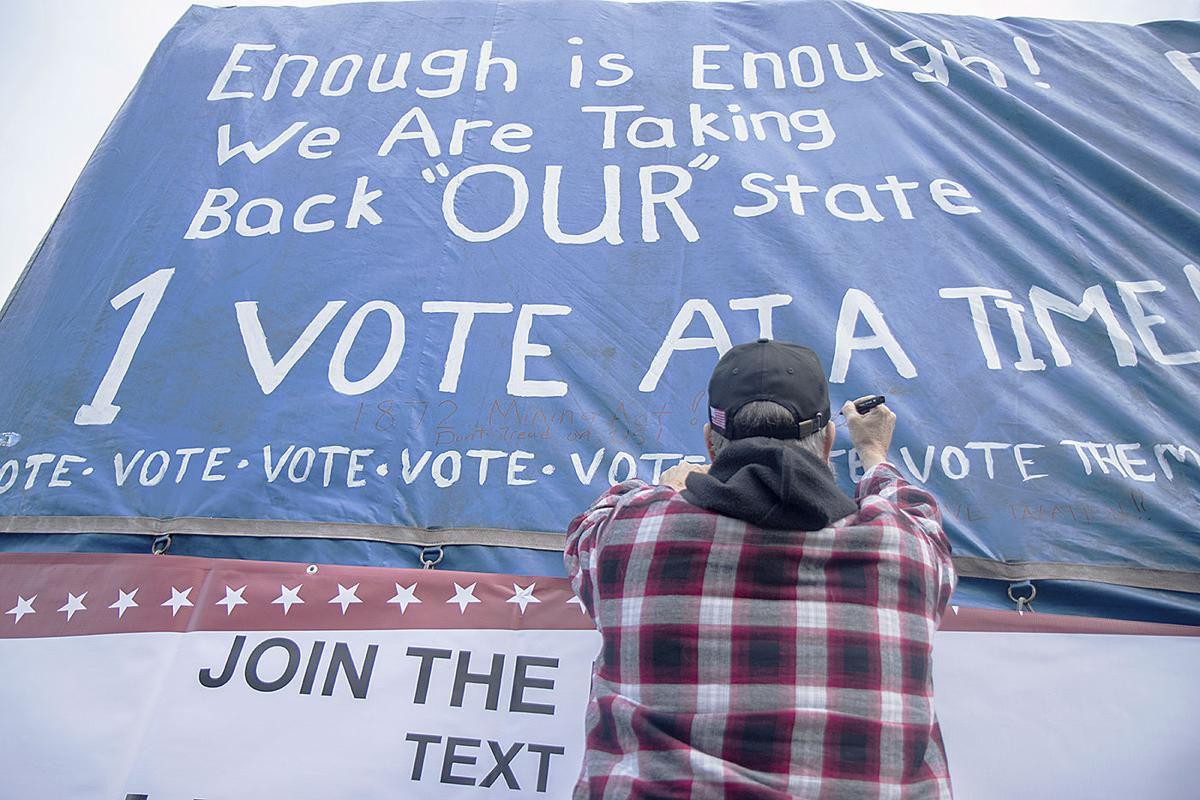 A protester signs his name and a message on a tarp hanging from a truck.

SALEM — Thousands of Oregonians lined the streets and converged on the steps of the Capitol on Thursday to protest cap-and-trade legislation they say would decimate the rural economy.

Sign-waving protesters met with Gov. Kate Brown and legislators and filled hearing rooms with their testimonies. More than 1,000 trucks, tractors and other large vehicles circled the Capitol for hours, with horns blaring.

The protesters, working-class residents who are part of a movement called #TimberUnity, fear Senate Bill 1530 will lead to higher fuel prices, which would hurt truckers, loggers, farmers and others who live and work in rural parts of the state.

“This production up here is huge. We have such a huge family with #TimberUnity now. The rally, the trucks that are coming through — it’s just like nothing I’ve ever seen before,” said Shelly Gedenberg-Solum, of Gedenberg Log Trucking in Astoria.

“From just Clatsop County, just our area at North Plains, there was 210 trucks, and there’s that many coming from every direction. So, by the time today is over we’ll have well over a thousand trucks here.”

They came from Coos Bay and Wheeler, Alsea and Albany, Ontario and Port Orford. They included men, women and children — singular demonstrators and families united around a common goal of making themselves and their rural plight heard.

Some took time off from day jobs to travel to Salem to protest. Others were paid by employers to hit the road instead of tackling tasks back home.

Rachel Abbott, who works in the hospitality industry and was raised on a farm near Sheridan, said she doesn’t like to see the urban-rural division. “This should not be a rural-versus-urban issue,” she said. “It would put my family farm out of business, but it hurts all Oregonians.”

Jake Tacy, a logger from Lebanon, sees an effort by the state to take more of his money.

“Every time it seems like they meet here, they just want more of my money,” he said. “I have to work pretty hard for a living. I’m tired of just giving it up. I don’t think that, when it comes to cap and trade, that that’s going to do anything that betters the environment. I mean … lots of people don’t understand the logging industry, don’t understand how we already take care of the land.

“If I had to pay a little bit more taxes to actually go toward something like making my pickup or equipment get better mileage, that would be different. But just to tax you, and then it’s not going to make less pollution because we have to do what we’re doing,” he said.

The big turnout at the rally surprised even its organizers. Lines of trucks paraded around the Capitol from 6 a.m. to 1 p.m.

Some convoys formed across the state as early as 1 a.m., said Jenny Dressler, of the Oregon Farm Bureau.

#TimberUnity emerged during last year’s legislative session in protest of House Bill 2020, the previous cap-and-trade bill. The bill passed the House but failed in the Senate, where Democrats lacked the votes and Republicans walked out to deny the chamber a quorum.

This year’s bill has a similar concept — capping emissions and requiring industrial polluters to acquire allowances, which they can buy and sell, as an incentive to move toward cleaner energy. By 2050, the Carbon Policy Office estimates the cap-and-trade plan would eliminate 43.4 million metric tons of carbon annually from the atmosphere. Critics, however, point out that amount represents just 0.12% of global greenhouse gas emissions.

Estimates provided by the nonpartisan Legislative Revenue Office predict cap and trade would raise fuel prices by 22 cents per gallon in the first year of the program, according to state Sen. Bill Hansell, R-Athena.

Inside the Capitol, protesters did not go unnoticed.

At 9 a.m., Gov. Brown met with 10 #TimberUnity leaders as part of her continued effort to speak with rural stakeholders.

The meeting was closed to the press, but Julie Parrish, a former Republican legislator who is now a #TimberUnity board member, said the discussion with Brown and her policy advisers was “genial.”

The governor, she said, listened to protesters’ concerns but made no commitments on bill alterations.

In front of the Capitol, Jeff Leavy, one of #TimberUnity’s founders, told the crowd that the movement has grown into something larger than just about fighting one bill. He said it’s now about challenging overregulation, getting citizens engaged with government and trying to have a voice in the legislative process.

“Now you must build an army to defeat those in this building who want to take away your way of life. It’s a fight for freedom. It’s so much bigger than one bill,” he said, adding that “it’s now about all kinds of freedom: religious freedom, gun rights, the freedom not to be overtaxed.”

But not everyone was happy with the rally.

It was so bad that the Little Friends Montessori school — across the street from the Capitol — wouldn’t let their young charges go outside.

Nicole Bales of The Astorian and Sam Stites, Claire Withycombe and Jake Thomas of the Oregon Capital Bureau contributed to this report.

>25% of greenhouse gases are caused by cars and trucks. Standing trees sequester carbon. These protesters to me are screaming "we are the problem" at me. They need to offer more substantial than just that they are worried about their jobs.