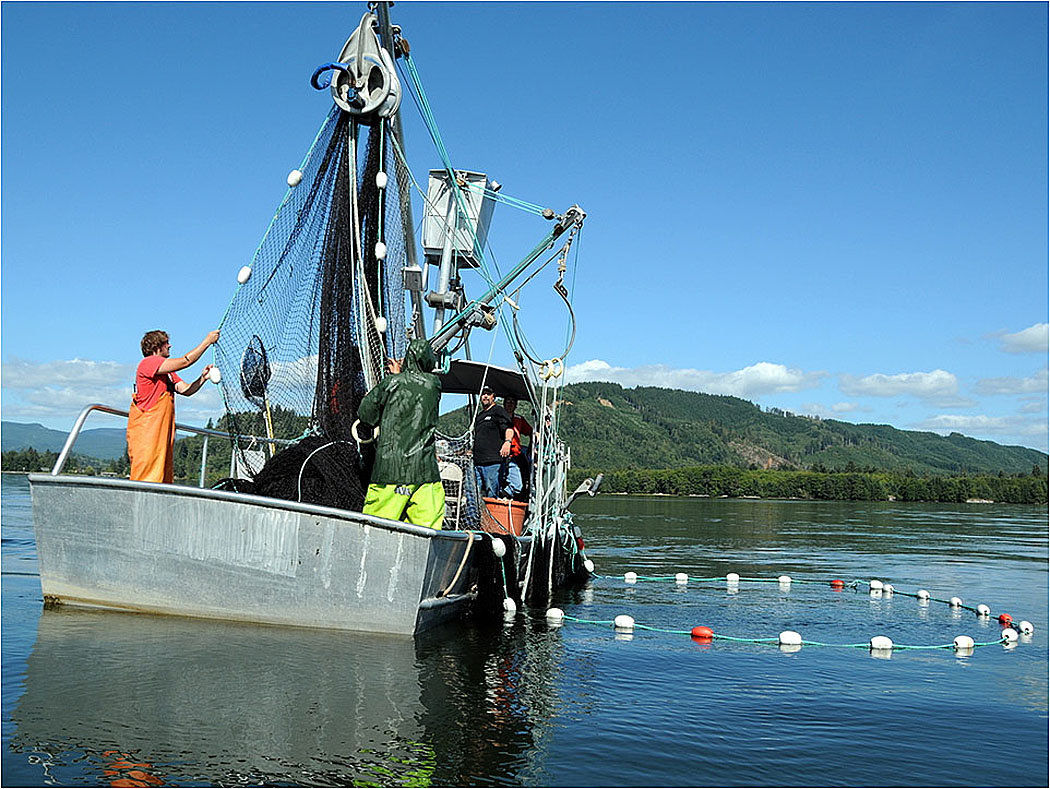 The states of Washington and Oregon continued in 2015 to try to restore seining as a salmon-fishing technique on the Columbia River. Above, the net is pulled in tighter, bringing any salmon in the net closer to the boat. 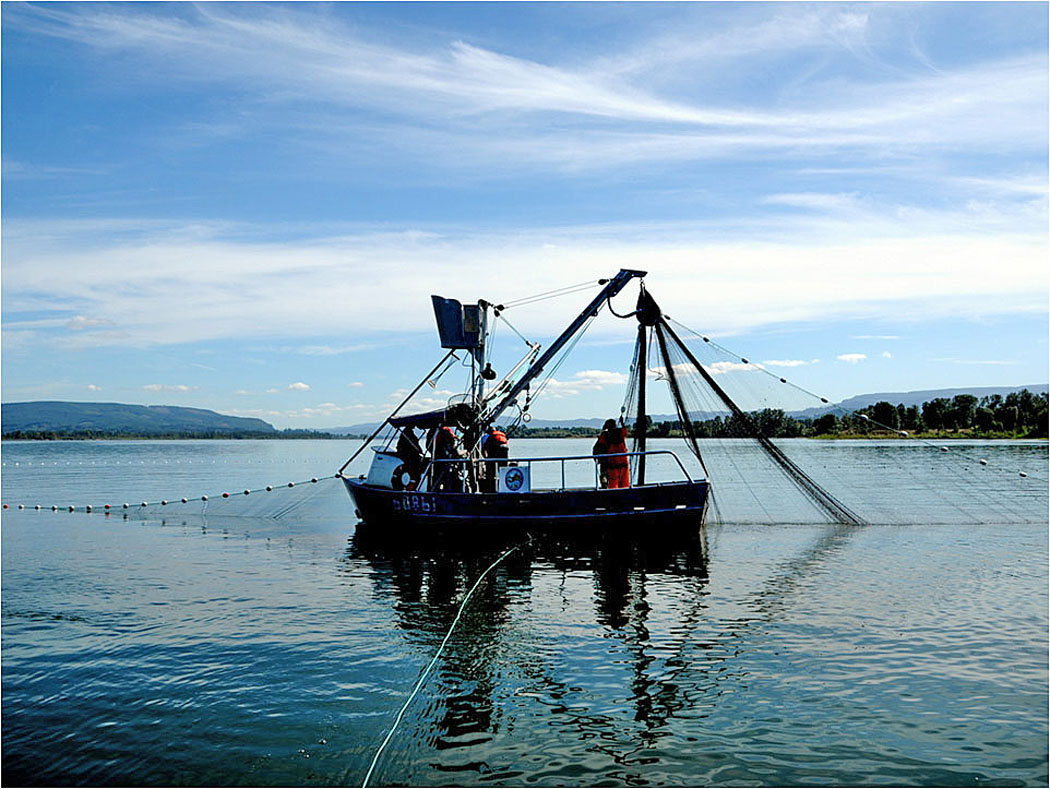 A small purse seine is deployed on the Lower Columbia River. The net is played out in a large circle, ready to be drawn or “pursed” in. Theoretically, any fish caught within the purse can be sorted through, with wild-spawning individuals released back into the water, while hatchery fish are retained. 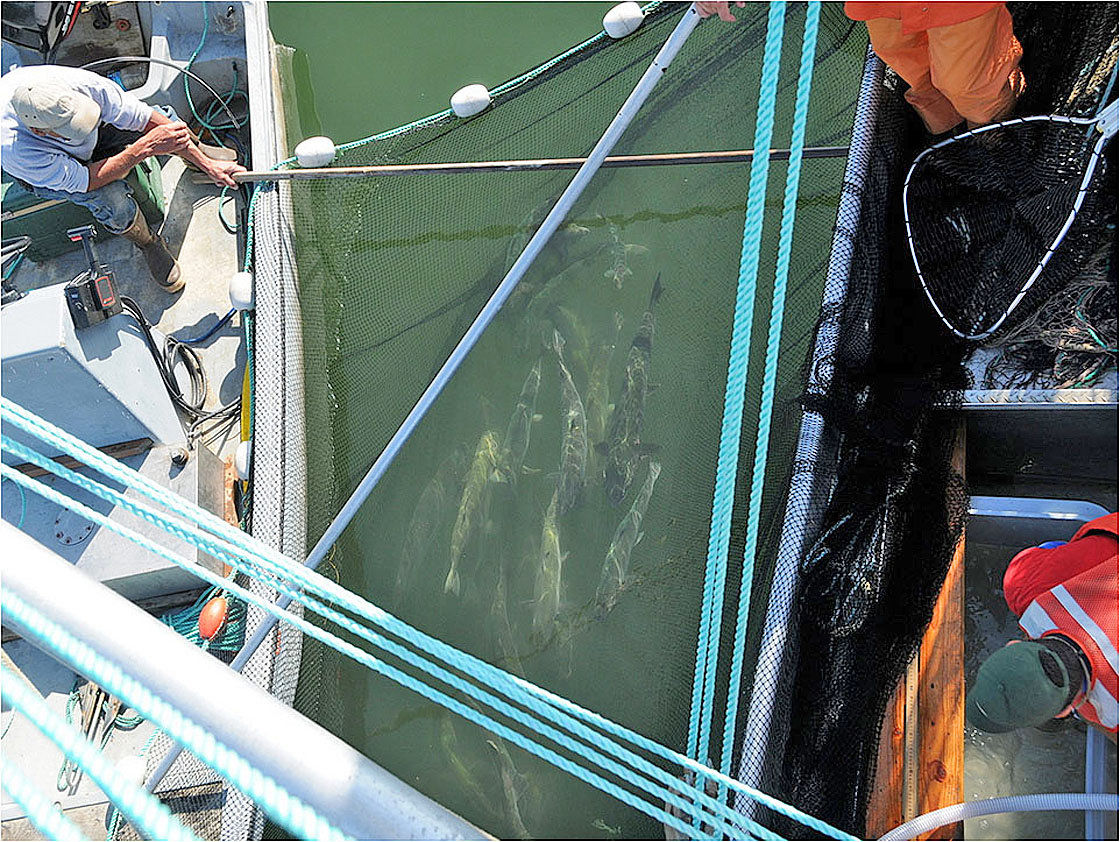 Fish are able to swim freely while crew members sort through them.

The states of Washington and Oregon continued in 2015 to try to restore seining as a salmon-fishing technique on the Columbia River. Above, the net is pulled in tighter, bringing any salmon in the net closer to the boat.

A small purse seine is deployed on the Lower Columbia River. The net is played out in a large circle, ready to be drawn or “pursed” in. Theoretically, any fish caught within the purse can be sorted through, with wild-spawning individuals released back into the water, while hatchery fish are retained.

Fish are able to swim freely while crew members sort through them.

Under a plan by disgraced former Oregon Gov. John Kitzhaber, the beginning of the end of commercial gillnet fishing on the main stem of the Columbia River is little more than a year away, but it is still not clear if gear banned on the river for decades will ultimately replace gillnets.

Oregon and Washington’s advisory group and fishery managers in both states are waiting for new information to be released that could clarify what the impacts of the proposed replacement gear — beach and purse seines — are on Columbia River salmon.

What that data shows could make a big difference in whether or not seines stick around.

“Overall, they didn’t seem to perform as well as people had hoped (this year),” said Stuart Ellis, of the Columbia River Inter-Tribal Fish Commission and chairman of the Washington and Oregon advisory group, the U.S. v. Oregon Technical Advisory Committee.

But, Ellis clarified, as a smaller-than-predicted run of coho finally arrived in the river this fall, many fisheries were catching less than expected.

Also, much has changed since 2013. Kitzhaber is no longer in office and former gillnet strategist Bruce Buckmaster was appointed to the Oregon Fish and Wildlife Commission this spring. As questions remain about the viability of using seines on the river, opponents of the plan are feeling optimistic.

“I’m feeling more hopeful than I was,” said Hobe Kytr of Salmon For All, an Astoria-based association that represents gillnetters. “Let’s put it that way.”

Kitzhaber’s plan to replace gillnet gear with purse and beach seines and phase gillnets out by 2017 went into effect in 2013, restricting gillnet fishing to side channels like Youngs Bay. Voters had shot down the plan in 2012 only to see Kitzhaber and Oregon and Washington’s Fish and Wildlife commissions proceed with it in 2013.

For the last two years, state fishery managers in Oregon and Washington have operated commercial purse and beach seine fisheries on the river — gear outlawed by Washington in 1935 and by Oregon in 1950.

But according to interviews conducted with members of the Oregon and Washington departments of Fish and Wildlife over the past two years, questions have plagued Kitzhaber’s plan from the start.

Mortality studies released last year seemed to indicate the seines had too high of an impact on salmon, meaning high percentages of seine-caught wild fish were more likely to die after being released back into the river. Fishermen — both sport and commercial, on the river and on the ocean — are limited to a certain percentage of wild salmon they are allowed to catch, handle or keep.

Since 2013, the states have been studying the seine fisheries, trying to determine how they should function on the river and what a commercial seine fishery for Columbia River salmon even looks like. Each year, they have refined their data, fishery managers say.

“As it’s gone along, I think people are a little more comfortable with the numbers going in,” Ellis said, looking back over the years since Kitzhaber’s plan went into effect.

He and others say the states have done an admirable job in collecting data and monitoring seine operations. When Ellis went out on a boat this summer, two state fishery observers were also aboard.

By the end of the season, beach and purse seiners had landed a total of 2,439 marked Chinook and 4,046 unmarked Chinook, 1,031 marked coho and 2,222 unmarked coho as well as 703 steelhead, according to a 2014 fall seine fishery observation summary published on the Oregon Department of Fish and Wildlife’s website.

This fall, purse seiners landed a total of 2,312 Chinook and 526 coho during the fall season, according to numbers available from Oregon. Beach seiners landed significantly less from August through the end of September, ending with 681 Chinook and 61 coho.

For Kytr and the Lower Columbia River gillnetters, very real questions remain about the economic impact of losing the main stem. The select areas — places like Youngs Bay specifically designated for commercial fishing — can’t support the same number of fishermen that the mainstem can, they argue. And, they say, not all gillnetters are able to or want to switch gear.

And, as Ellis points out, there is still much work to be done if seines are to replace gillnets.

Last year, commercial seiners on the Lower Columbia River fished using “research impacts,” meaning the wild fish they caught during the course of normal fishing didn’t get deducted from the regular commercial impacts.

This was the first commercial seine fishery to operate on the Lower Columbia River in decades, and the seiners were able to catch and sell their salmon just like any other fishermen.

This year, the seiners were considered part of the regular commercial salmon fleet and their impacts — no longer billed as “research impacts” — counted in the same way. In the future, fishing season planning could get complicated and expensive with seines in the mix, too, Ellis said, especially if seines do in fact have a high impact on salmon.

There are also questions about what such fisheries would look like for Oregon fishermen versus Washington fishermen.

Both state Fish and Wildlife departments oversee the seine fisheries, and all of the participating fishermen this year needed to have a current Columbia River commercial salmon license and be able to show that the had landed salmon from the mainstem of the river or in select area fisheries off the mainstem within the last two years.

But while Oregon residents also needed to purchase a $32 nontransferable experimental gear permit issued by ODFW if they were selected to participate in either of the seine fisheries, in Washington, the cost of participation was higher.