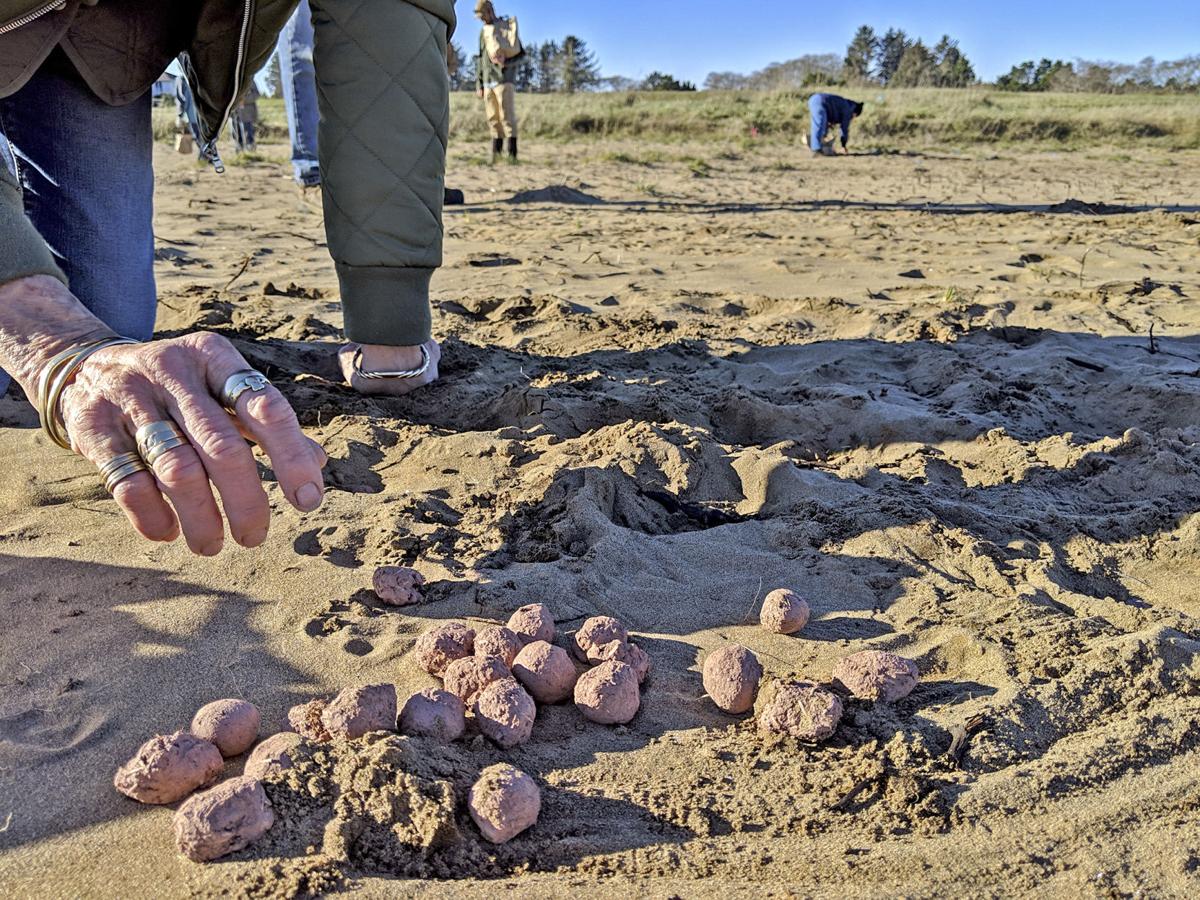 Volunteers with the North Coast Land Conservancy plant ‘seed bombs’ at a coastal prairie restoration site in Clatsop County. The habitat is crucial for the threatened Oregon silverspot butterfly. 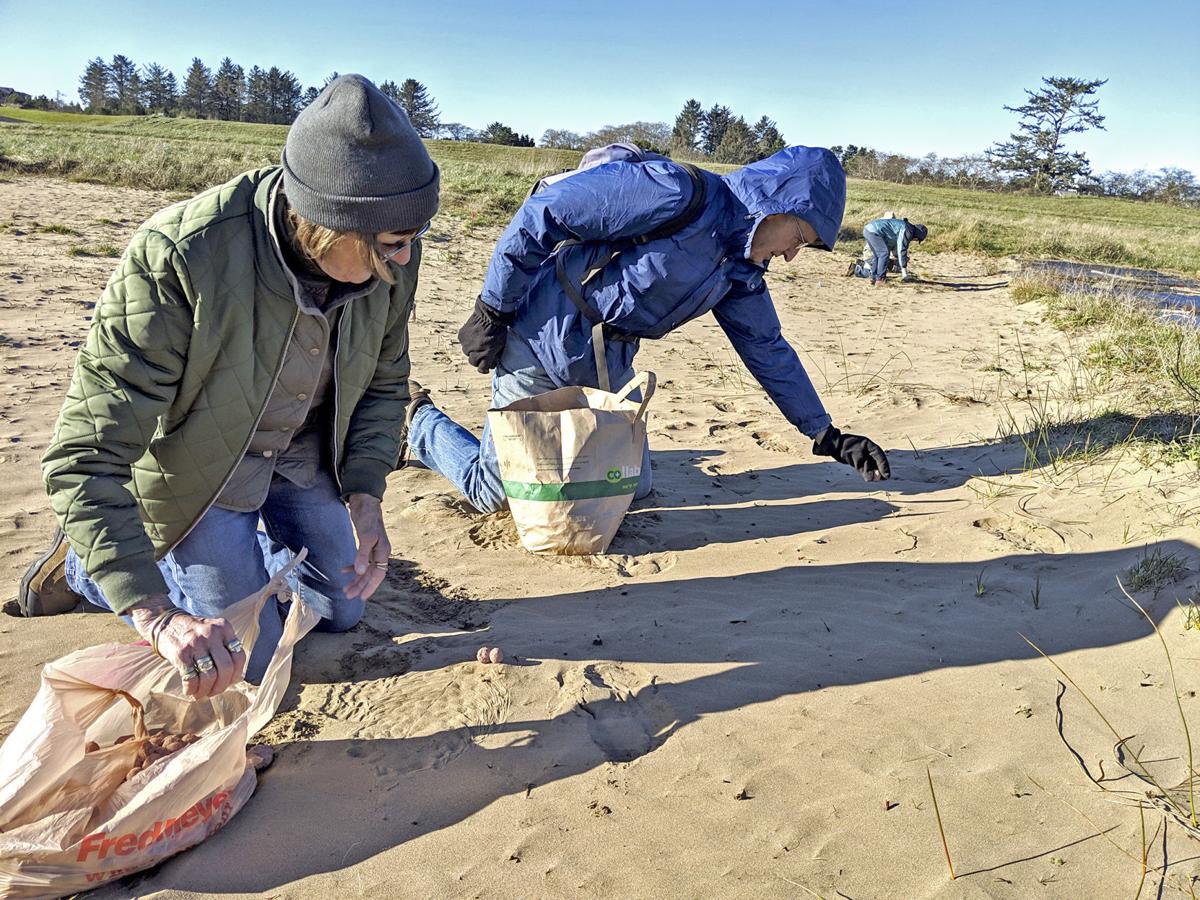 Penny Abegglen and Vaughn Martin of Clatskanie work together to replant a site with native seed. 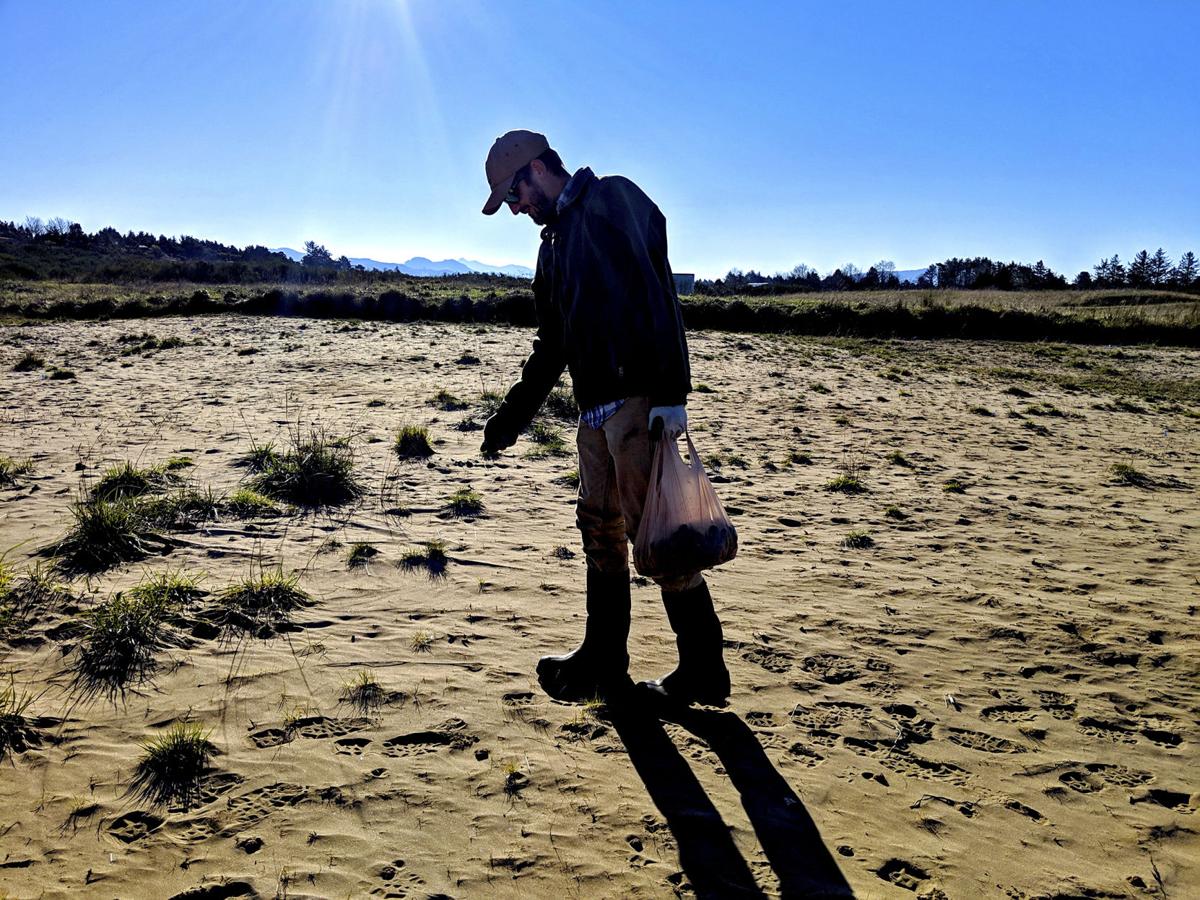 Eric Owen, land steward for the North Coast Land Conservancy, plants native seed at property the organization has conserved at Reed Ranch between Warrenton and Gearhart. 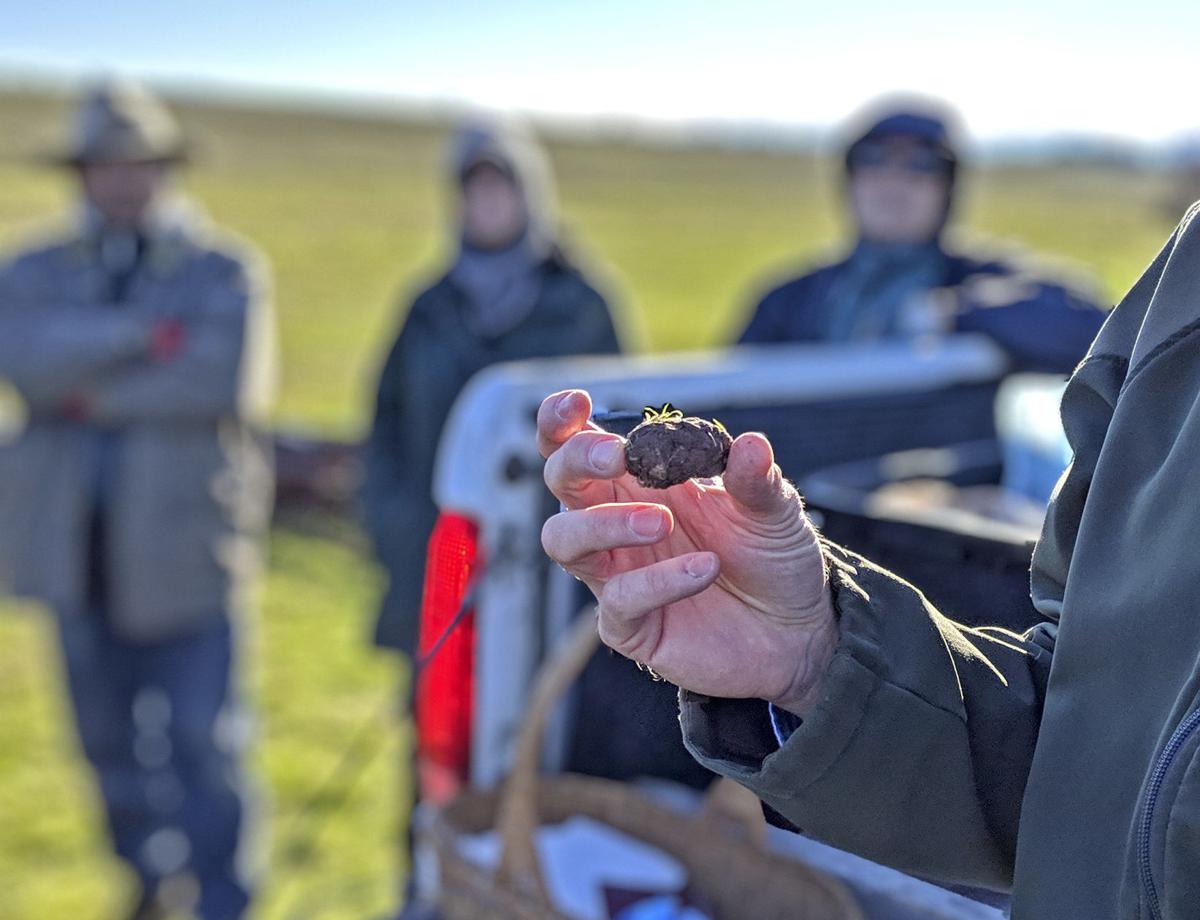 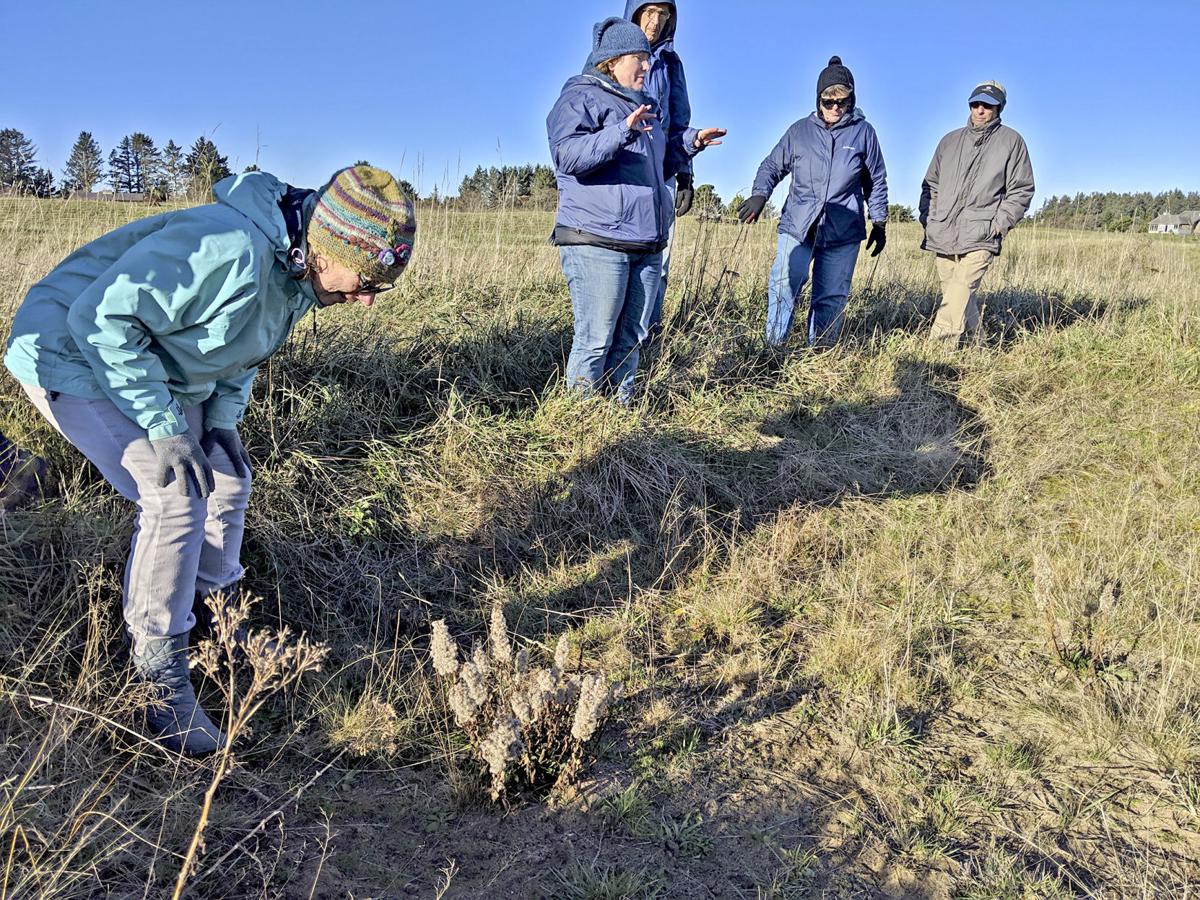 Volunteers with the North Coast Land Conservancy stop to examine a clump of dune goldenrod at a test site where the organization has successfully been able to grow plants native to the area’s coastal prairie habitat.

Volunteers with the North Coast Land Conservancy plant ‘seed bombs’ at a coastal prairie restoration site in Clatsop County. The habitat is crucial for the threatened Oregon silverspot butterfly.

Penny Abegglen and Vaughn Martin of Clatskanie work together to replant a site with native seed.

Eric Owen, land steward for the North Coast Land Conservancy, plants native seed at property the organization has conserved at Reed Ranch between Warrenton and Gearhart.

Volunteers with the North Coast Land Conservancy stop to examine a clump of dune goldenrod at a test site where the organization has successfully been able to grow plants native to the area’s coastal prairie habitat.

While sheep watched from a hillside, women and men unloaded grocery bags of bombs from the back of a pickup truck.

They carried the bombs to an exposed rectangle in the middle of a grassy prairie turned yellow and brown for the winter, where the earth was peeled back to reveal soft, sandy soil. Some people worked on hands and knees to plant the bombs one by one in the ground. Others stood, dropping bombs every few inches and pushing them in delicately with a booted foot.

They’re hoping for an explosion on the Clatsop Plains.

No one has quite figured out how to restore Oregon’s coastal prairies, unique habitat that is critical to the recovery of the threatened Oregon silverspot butterfly. But the seed bombs planted at Reed Ranch near Gearhart earlier this month may be a start.

Volunteers with the North Coast Land Conservancy planted 8,000 to 12,000 of the small globes of rust-colored clay stuffed with native seed. Plantings at Reed Ranch had failed previously, but the land conservancy saw some success at smaller plots and wanted to try on a larger scale again.

The bombs, project leaders theorize, will not only protect seeds from hungry birds, they will also keep the seeds from immediately blowing away, an issue that likely contributed to the failure last time, said Melissa Reich, the stewardship director for the land conservancy.

It’s an experiment, Reich said, but one made even more important because of how difficult it can be to get enough seed and young plants to really make an impact on the prairie.

“This seed is very precious,” she said.

The restoration work finds its focus around the silverspot butterfly, a small, reddish-orange insect with distinctive silver spots. They have declined or completely disappeared from sites within their range because of habitat loss.

Restoration work that has occurred or is ongoing at sites across the Clatsop Plains — an area of wetlands and sand dunes that stretches from the Columbia River south to roughly Tillamook Head near Seaside — will create pockets of potential habitat.

The bombs planted at Reed Ranch contain over a dozen different kinds of plant species native to coastal prairies, many of them nectar species important to silverspot butterflies and other pollinators.

The seed was collected by hand by some of the same volunteers who also helped assemble the seed bombs and plant them in the sand this month.

“The biggest limiting factor for us to really move forward in large-scale restoration work is the absence of large quantities of native seed for plants the butterfly is dependent on,” said Celeste Lebo, a natural resources specialist with the Oregon Department of Fish and Wildlife.

To really dig into a site, project managers need a lot of seed and plant material to play with. But it doesn’t help that there is no established method of how to successfully restore coastal prairie habitat.

“Even if we could find something that works, and a magic combo of all these site treatments, we really need a large quantity of seed and plant materials to follow up,” said Carla Cole, the natural resources project manager at Lewis and Clark National Historical Park.

While Cole, Lebo and Reich have been able to find seed and plants for smaller restoration sites so far, they have been unable to build up a real bank of plants.

Lebo recently applied for funding to coordinate a regional effort to secure high-quality native seeds and plants to restore coastal prairie, grasslands, estuaries and other habitat and to create a coastal native seed partnership.

The funding Lebo applied for through the Oregon Watershed Enhancement Board would pay for a part-time coordinator at the Institute for Applied Ecology, an organization that helped establish a similar partnership in the Willamette Valley. Besides overseeing the seed partnership, the coordinator’s job would also be to develop a best practices plan for how to restore coastal prairie land.

“People have been at this for over 15 years, maybe two decades, and it is still not clear how to restore coastal prairie habitat,” Lebo said. “We really don’t have a good model of success.”

One of the few successes Lebo, Reich and others can point to is prairie restoration work in Nestucca Bay near Pacific City. But it’s not clear how much of a hand the specifics of the site, or particular treatments, might have had in that success.

This summer, 545 silverspot caterpillars were placed on Saddle Mountain, the first time the area has seen these insects since they disappeared decades ago. Surveys conducted later counted 27 adult silverspot butterflies.

When 1,000 caterpillars were released at a site in Nestucca Bay the year before, a contractor for the U.S. Fish and Wildlife Service could only account for 9 percent of the caterpillars along his survey route. This does not mean only 9 percent became butterflies, he cautioned.

Predation is a big problem when butterflies are introduced to an area, Lebo noted. That people could see even 27 silverspot butterflies at Saddle Mountain is a success.

Still, Cole, Lebo and Reich find it helpful to focus on the overall goal of restoring coastal prairie habitat rather than to concentrate only on the very difficult path of recovery for the silverspot butterfly.

With things like the seed partnership and a Clatsop Plains pollinator project in the works, Lebo is hopeful their work will benefit a wide variety of species and Clatsop County’s coastal prairies as a whole.