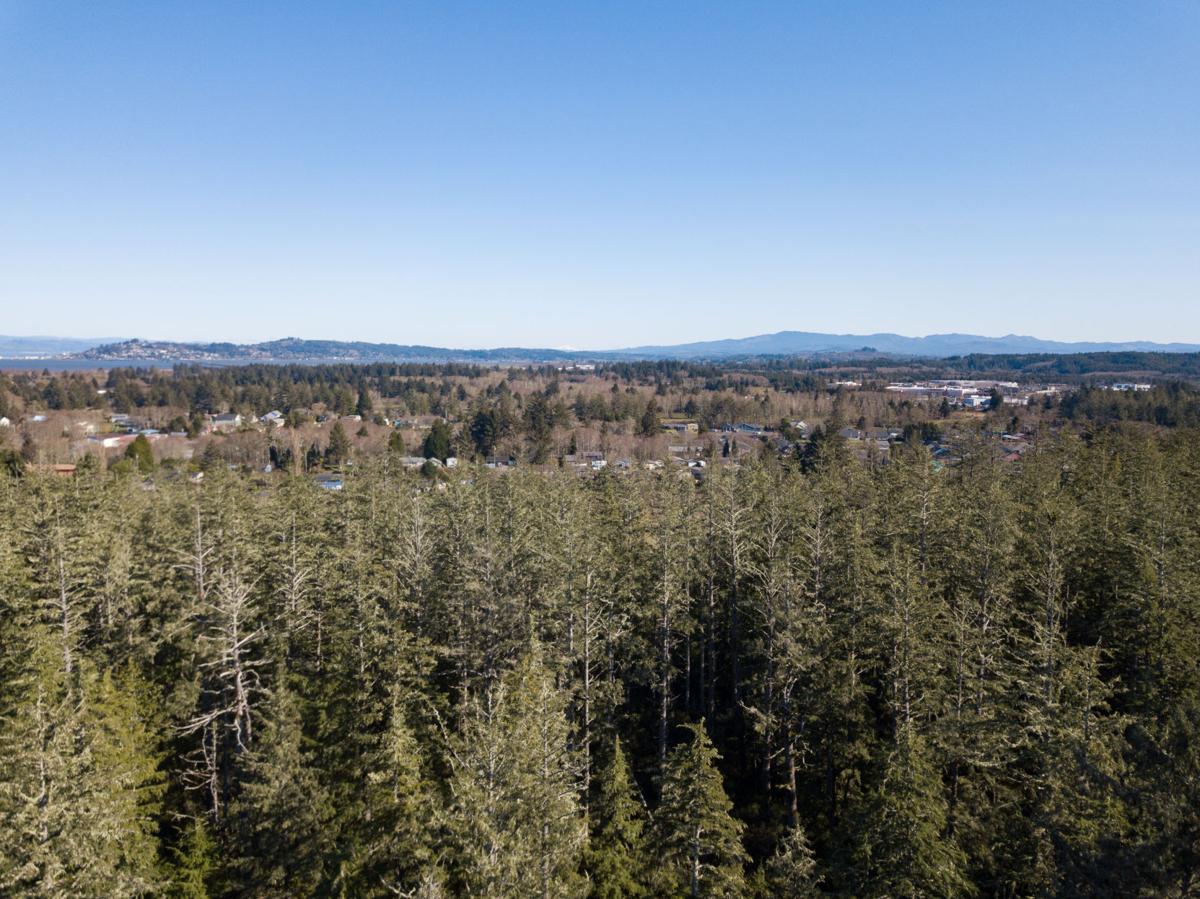 The Kujala family owns a large portion of undeveloped land in the middle of Warrenton. 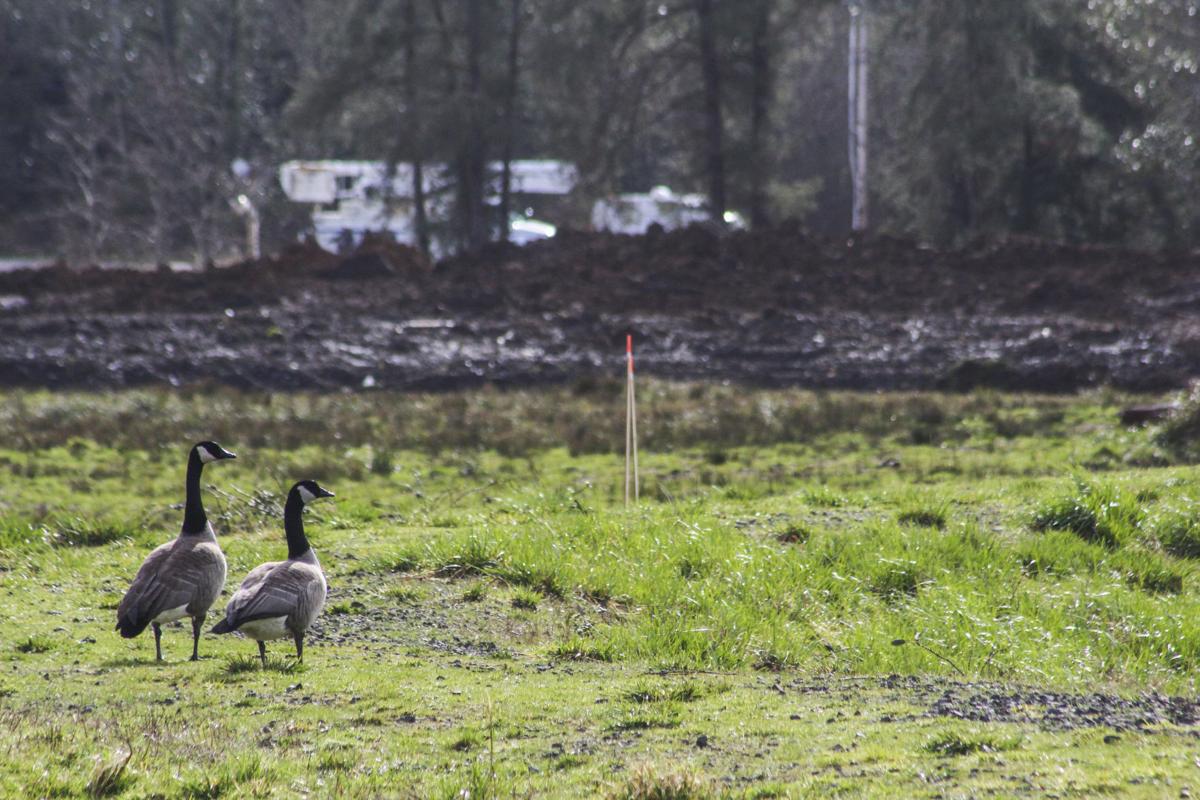 Geese walk the Skipanon River Trail in front of property the Kujala family is filling for a potential housing development.

WARRENTON — The Kujala family, owners of a large swath of land on the eastern end of the Skipanon River just north of state Highway 104, has started filling in uplands and hopes to build higher-density housing.

But city officials, more cognizant of the impacts of development on the surrounding community, want a master plan similar to the recently approved Chelsea Gardens neighborhood.

The Kujala property is zoned for an intermediate density of single-family homes, municipal offices, schools, parks, libraries and places of worship. The family has started filling in 2 acres worth of uplands at the site and applied to revise the zoning to high-density residential like the land owned by Stan Johnson, who is developing a 16-unit apartment complex along Highway 104.

The area has become an emergent location for housing and commercial development. To the south of the Kujala property, Johnson was approved to build Eagle’s Landing. Directly east, developer Jason Palmberg has proposed a 30-acre campground and RV park he said could share access and utilities with the Kujala property. Farther east, the City Commission approved Chelsea Gardens, a high-density mix of commercial and residential development between Ocean Crest Chevrolet and Home Depot.

The Kujala property, platted with streets and various-sized lots but pockmarked by wetlands, spans from Highway 104 north to nearly Seventh Street, abutted to the north and east by the Palmberg property. Seventh Street runs from Galena Avenue, where the Kujalas own property and their company Skipanon Brand Seafood, west to the Eighth Street Dam, which is in the process of being abandoned as the Skipanon Water Control District dissolves .

The city, water district and the Columbia River Estuary Study Taskforce had approached a $1.2 million agreement several years ago to replace the graveled, earthen dam with a single-lane bridge. Bonneville Power Administration would have funded the replacement as part of its obligation to improve fish passage along the lower Columbia River. Both the Kujalas and Palmbergs argued for a wider, two-lane bridge over the river to aid in the growth of the city.

The agreement dissolved over differences about whether the dam is still useful for flood control.

The Kujalas, who declined to comment, have so far been noncommittal about what type of development could come in on their property, Cronin said. A large swath has already been cleared of brush, filled and graded.

“I think what they’re going to do is wait until the last minute based on what the market is telling them what’s the most profitable and what’s going to sell,” Cronin said.

While that is true, houses and apartments would not necessarily need to be tsunami proof unless you design them on a pier system similar to that Jay Raskin's (an architect) concept for a tsunami resistant city hall for I think Cannon Beach. A design concept would resemble houses built in hurricane regions where storm surges are normal so the water flows. Most importantly, the goal is not to prevent evacuation from the homes but if possible minimize loss of life but also if possible minimize loss of property. It should be noted that the Skipanon is not going to be subject to the tsunami itself. It will be subject to a tsunami related event called river seiche and ripples from when the tsunami wave and river flow comes into collision (especially if there the rive tide is outgoing). This would happen around the Jetty area so we will have massive wave collision and ripples during that event and you absolutely do NOT want to be near the little lookout tower thing when the tsunami arrives so you better not be there when the wave comes and the earthquake itself IS your notice. Don't wait for sirens or any of that. Get away from there.

The Skipanon Pennisula area is also an area that you will want to leave the area as best as possible before the tsunami arrives. If possible, getting out of the homes and in your car during the earthquake would be good but the homes will need to be resilient and strong enough to not collapse during the earthquake. The design of the homes would need to be design so a path to the car will not result in occupants going near windows or TVs that can 'fly' off whatever it is sitting on. CRTs can be hazardous and even LCDs (to a lesser degree due to less weight). Design must account for a quick, safe, and east egress to a car or vehicle and that no overhead electrical hazard should be there cause evacuation difficulties. Utilities in this case should be underground so they don't pose difficulties for people to get out of there. The roads in and out design would need to be designed to allow for a means to evacuated to a evacuation location in 5 minutes from the time the earthquake begins with a 2-3 minute post-earthquake grace period. The earthquake from a Cascadia Subduction zone is estimated to be about 5-7 minutes long. The tsunami arrival of 5-6 minutes after the earthquake and maybe up to 30 seconds before seiche effects Skipanon area in consideration of about 3 miles and propagation is slowed down when it reaches the Oregon coast beach line area. It will slow down even through the river. Cheap 1 story slab foundation homes are unlikely to survive without flood damage effect. There is a lot of planning for seismic/tsunami event resilience that would need to take place between the developer (Kujala et al), architect/designer, planners, etc. Quality should be a key look at this versus any sort of quick cash. There are a variety of design approaches but I just gave one. Mr. Kujala, if interested, we can talk. I'm a building designer based in Astoria, Oregon.

It maybe something were a 15,000 sq.ft. area or larger area could be made and built up to an elevation level above the flooding area problem. It would have to be seriously looked at and assessed.

Planning out the area and design can be something I am willing to work with others as well as such development may need.

I don't suppose it matters to any of the planners or developers mentioned in this article, but the proposed area for developed is in the "maximum danger area" for rapid inundation by the tsunami expected following the rupture of the Cascadia Subduction Zone. All the relevant maps can be found at https://www.oregongeology.org/pubs/ofr/O-16-08_report-text.pdf . One has to wonder why the State of Oregon and Clatsop County have not declared these areas off-limits to any further development. Instead of applying for development permits, the owners ought to be writing down to zero the economic value of their properties. What rational person would want to live, shop, or vacation there? Denial of patently evident risk does not make for a reasonable planning scenario.