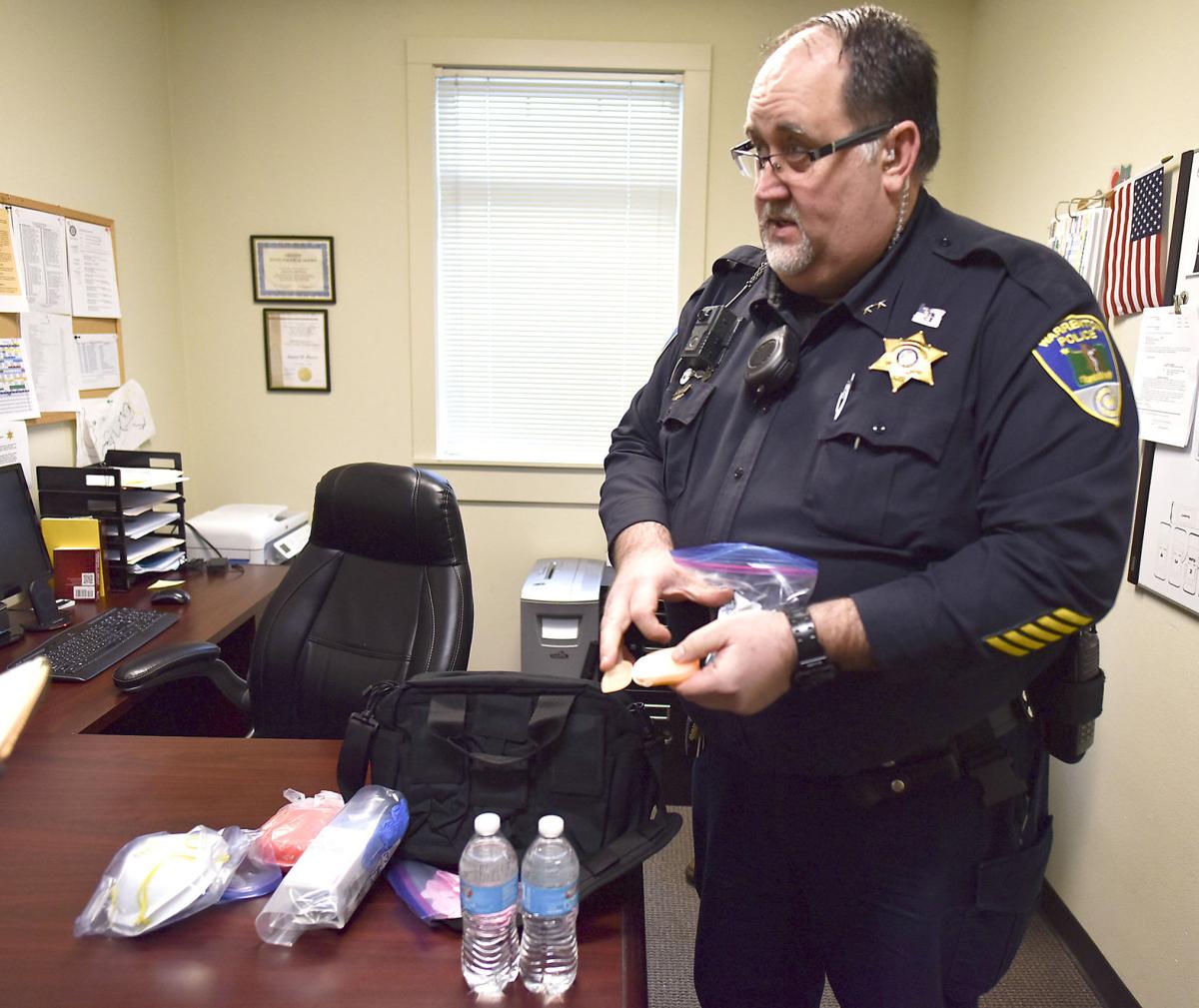 Warrenton Police Chief Mathew Workman displays the kit which includes doses of naloxone that officers will carry with them in their vehicles. 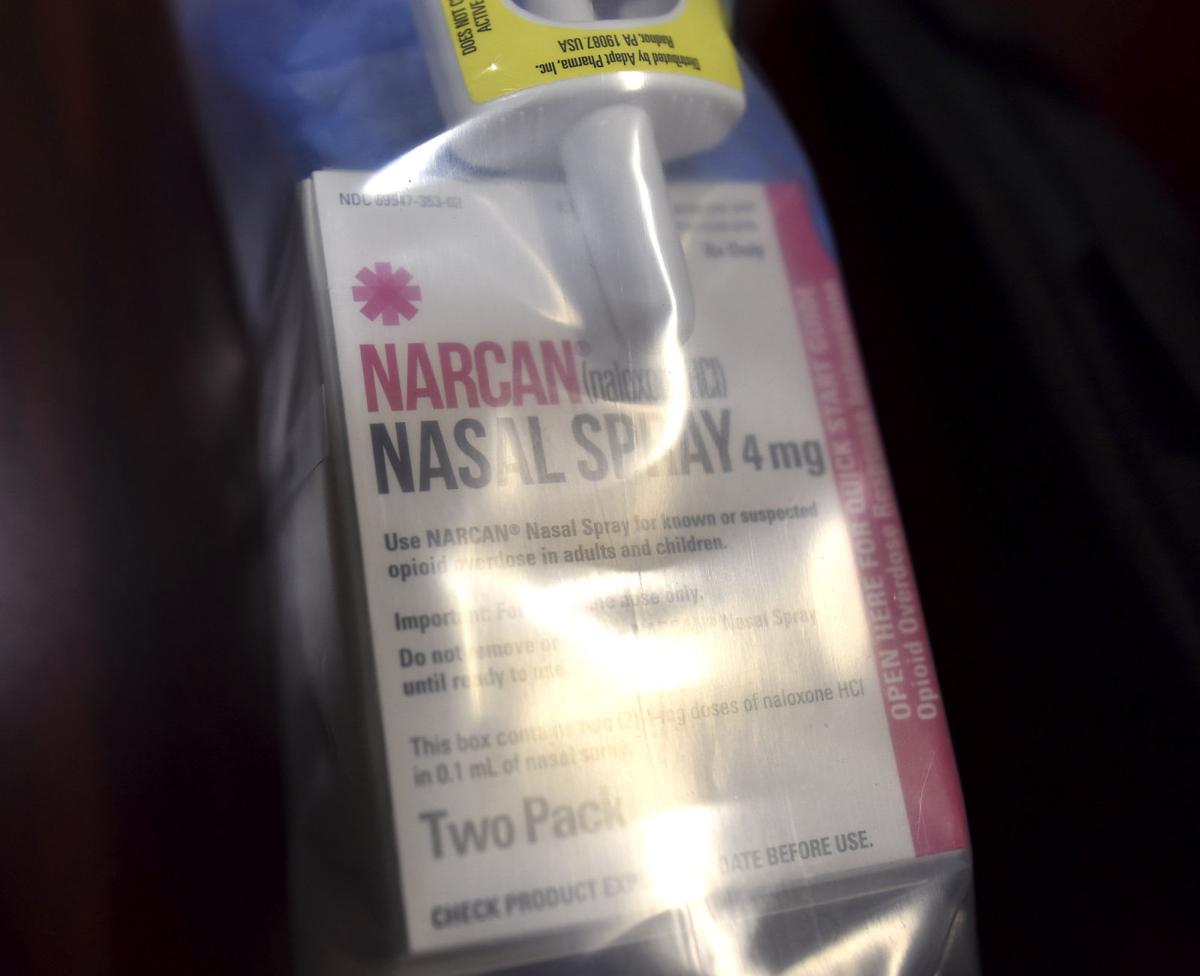 Naloxone, or Narcan, is a medication that quickly treats a patient for opioid overdose. 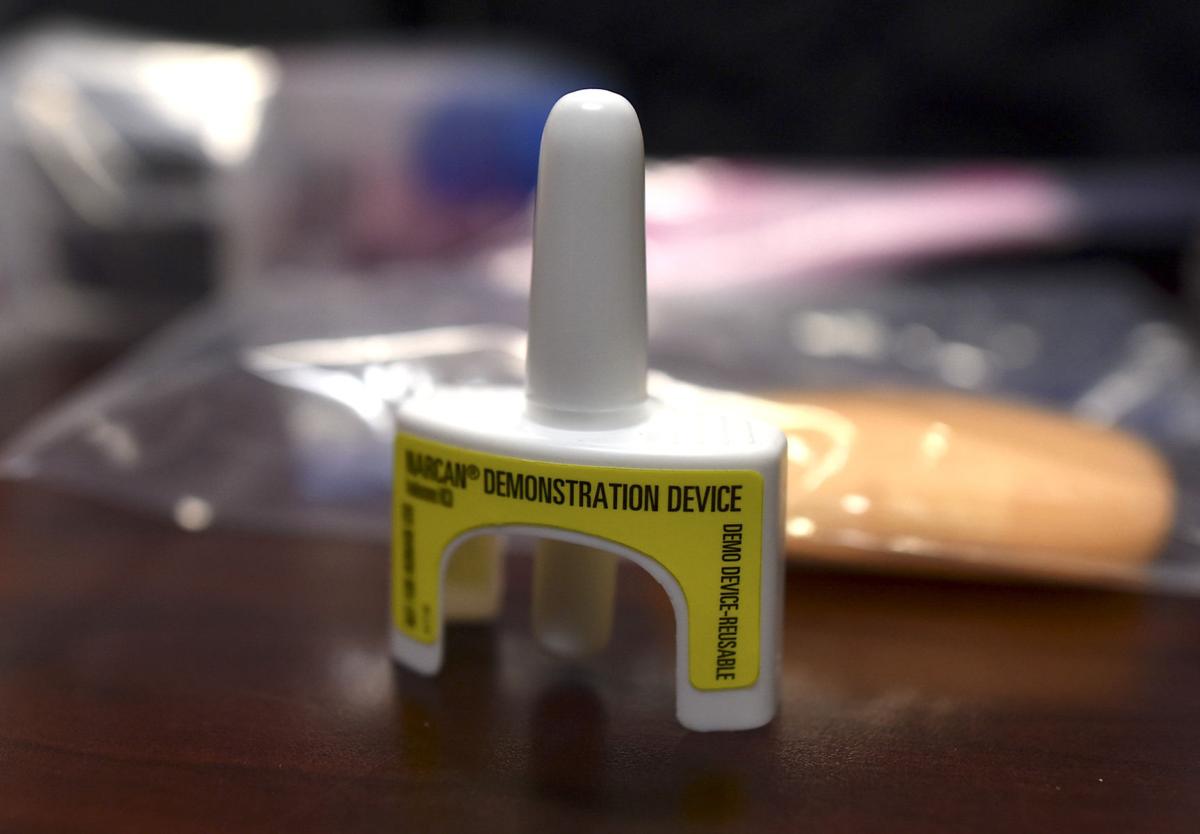 The naloxone kits carried by Warrenton Police Department officers will include a device that administers the medication through the nose. 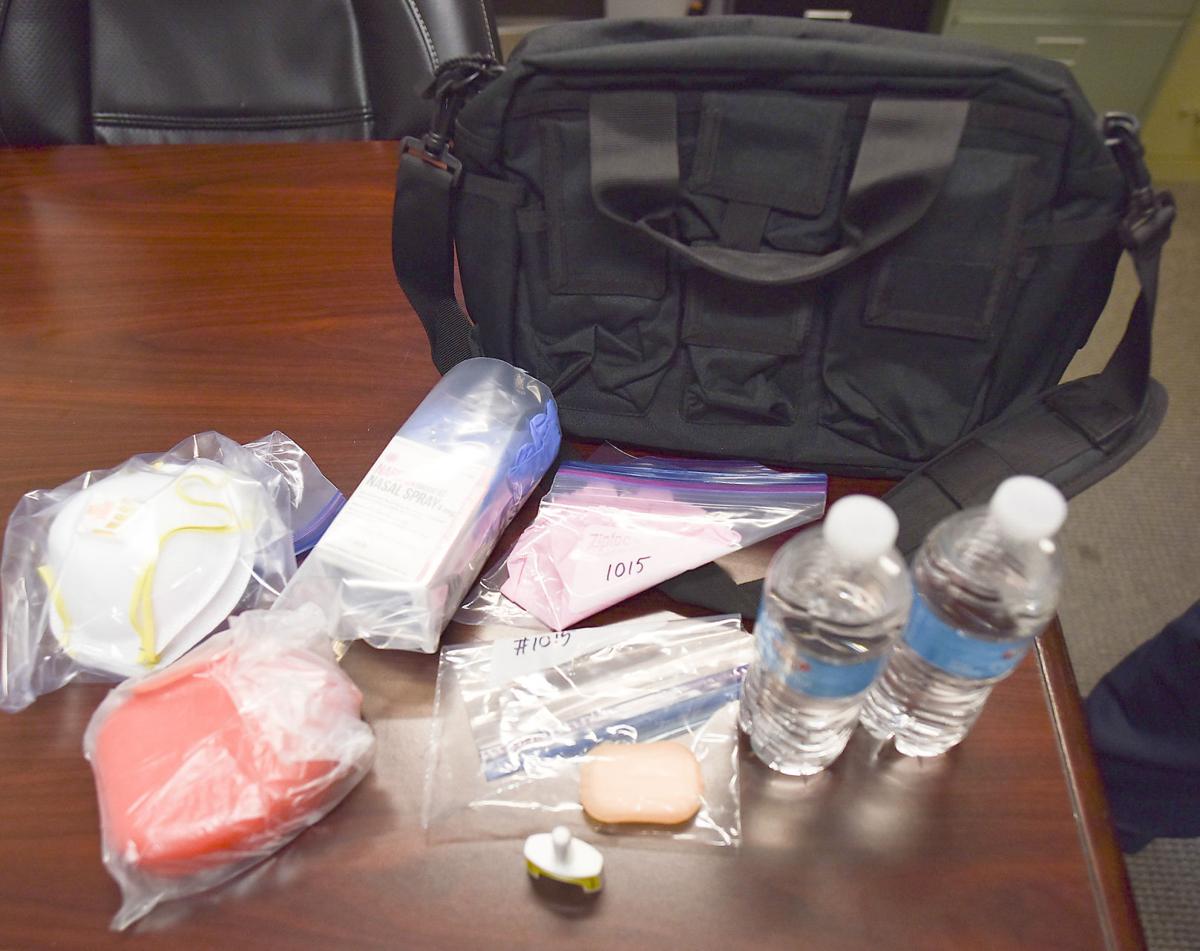 The kits carried by Warrenton officers will also include supplies to enhance their safety while treating patients for opioid overdose.

Warrenton Police Chief Mathew Workman displays the kit which includes doses of naloxone that officers will carry with them in their vehicles.

Naloxone, or Narcan, is a medication that quickly treats a patient for opioid overdose.

The naloxone kits carried by Warrenton Police Department officers will include a device that administers the medication through the nose.

The kits carried by Warrenton officers will also include supplies to enhance their safety while treating patients for opioid overdose.

Each kit includes a two-dose nasal spray version of naloxone, a medication designed to rapidly reverse opioid overdose, along with a CPR emergency breather, rubber gloves, masks and other safety equipment.

The kits cost $95 each and were funded by a grant from Lines for Life, a drug abuse prevention group. The first 10 doses of naloxone were donated by Columbia Memorial Hospital.

The precaution is meant to protect drug users, those with opioid prescriptions and children exposed to drugs, as well as police, evidence technicians and others in law enforcement who regularly face the risk of exposure. The city also purchased a naloxone kit for its new drug-sniffing K-9, Gabe.

Warrenton Police Chief Mathew Workman said he has been trying to get the kits since a young man was found dead on a friend’s couch in Warrenton in April after swallowing a pill form of the synthetic opiate U-47700, nicknamed Pink. The overdose was the county’s first death from the synthetic opioid.

The kits and training are part of an effort to create a safer culture among officers, such as wearing protective equipment when searching people and property rather than reaching in with bare hands, Workman said.

“We do that a lot when we’re patting someone down and we get them in cuffs, and then we just start reaching,” Workman said. “We need to take that extra second. They’re in cuffs. Put your gloves on, whatever your (protective equipment) is. The scary thing is you almost want to double- or triple-glove now because it’s so potent.”

Between 2014 and 2016, 779 people died of overdoses in Oregon, a significant jump from the 257 who died between 1999 and 2001, according to the Oregon Health Authority. Dr. JoAnn Giuliani, the county’s medical examiner, reported six accidental overdose deaths in the county in 2016 and three last year.

“The numbers were much higher when methadone and pills were more generously prescribed,” she said in an email. “That has slowed, thankfully.”

During the North Coast Opioid Summit in Seaside in 2016, Workman was approached about possible grant funding for the naloxone kits through High Intensity Drug Trafficking Area, a drug prohibition enforcement program run by the U.S. Office of National Drug Control Policy. But adoption was slowed by the requirements that come with carrying overdose kits.

“Oregon’s rules … said you have to have a medical physician to oversee your program, and you also have to have a medical physician give you a prescription for the naloxone,” Workman said. “So I approached several local doctors. All were interested. None of them could do it because their malpractice insurance would not bring us on into their program.”

Individuals were already allowed to carry naloxone. In October, the Oregon Health Authority lifted the requirement that police agencies have clinical oversight of naloxone programs, instead allowing officers to go through training. Warrenton opted for voluntary medical oversight of its program and permission to obtain naloxone through an agreement with Dr. Regina Mysliwiec, an emergency medical physician at Columbia Memorial.

“When there’s a police officer around, they’re the first responder,” she said. “It’s as useful as teaching officers CPR, and I think it’s equivalent in that way.”

This week, Workman brought in about 70 officers from throughout the region for Fighting Fentanyl, a educational program on the rise of synthetic opioids run by Matt Griffin, a former drug task force and undercover officer from New Hampshire.

“This is cutting edge for Midwest and West Coast agencies,” Griffin said of Warrenton’s overdose kits. “This is what I’ve been trying to get in agencies for the last year and a half that I’ve been doing this training.”

Fentanyl, a synthetic opiate exponentially stronger than morphine, is a common ingredient in painkillers and increasingly consumed by drug users. Police started noticing fentanyl about two years ago, Griffin said. He created the educational course to inform law enforcement about the dangers.

Griffin was exposed to fentanyl in July and said he became dizzy and started throwing up. After raiding a home in Pittsburgh, Pennsylvania, 18 SWAT team members were hospitalized for exposure to an unknown airborne chemical. The U.S. attorney’s office believes the substance was fentanyl.

“Agencies upon agencies are having overdoses left and right,” Griffin said.