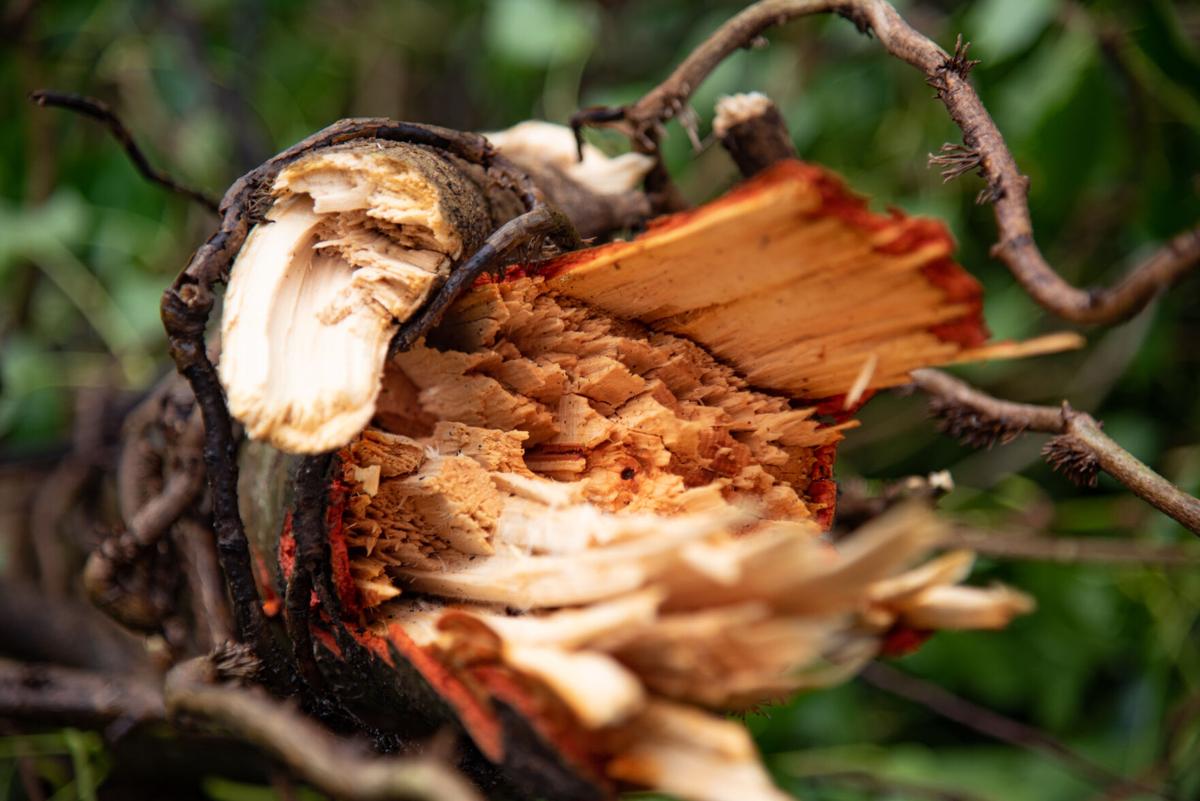 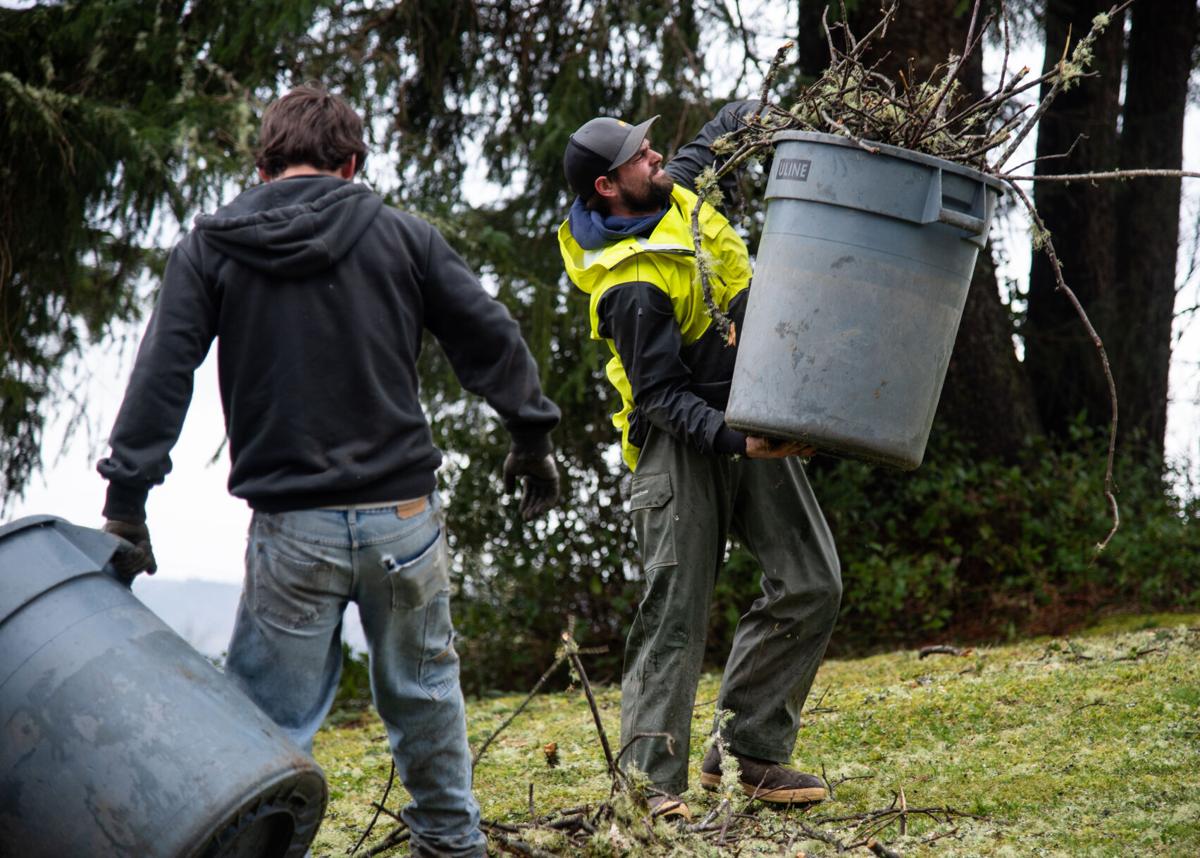 Ethan Holthusen, left, and Brent Saulsbury from 3D Landscape haul buckets of branches and other debris at the Astoria Column on Tuesday. 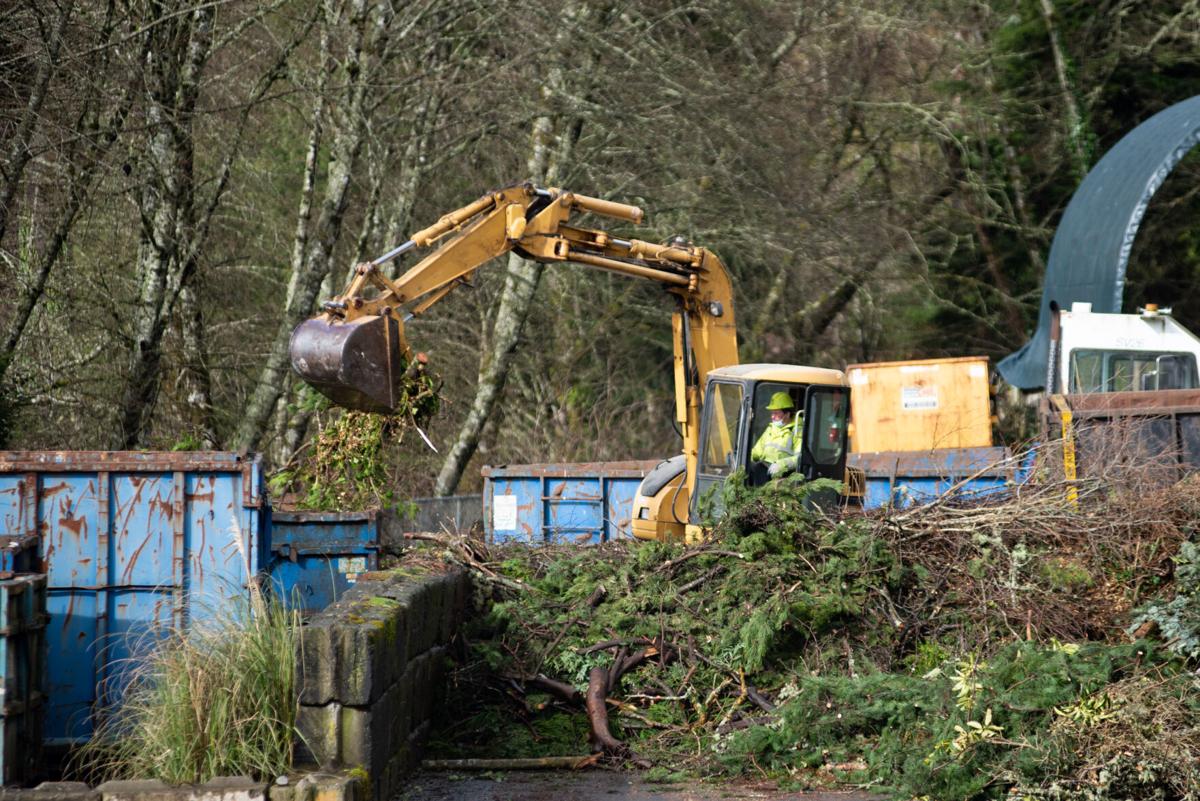 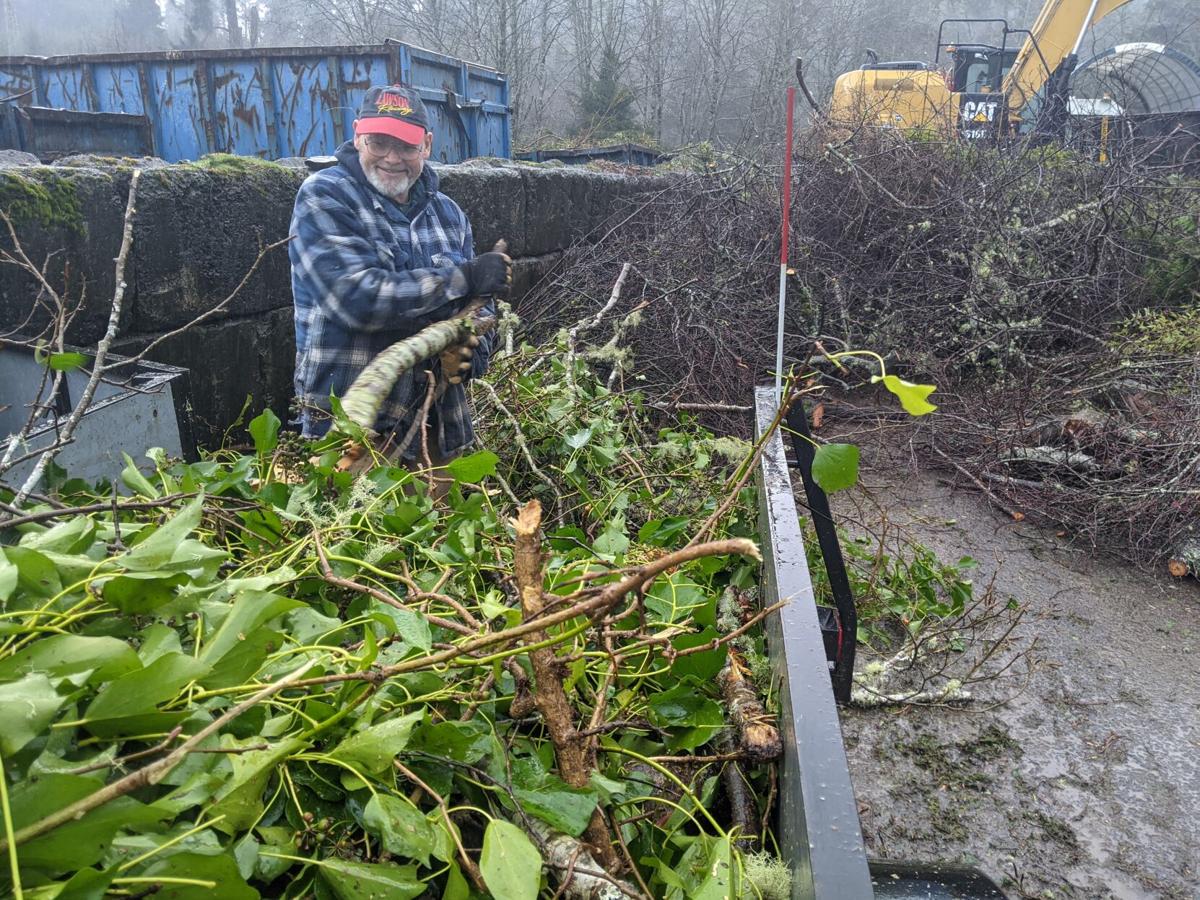 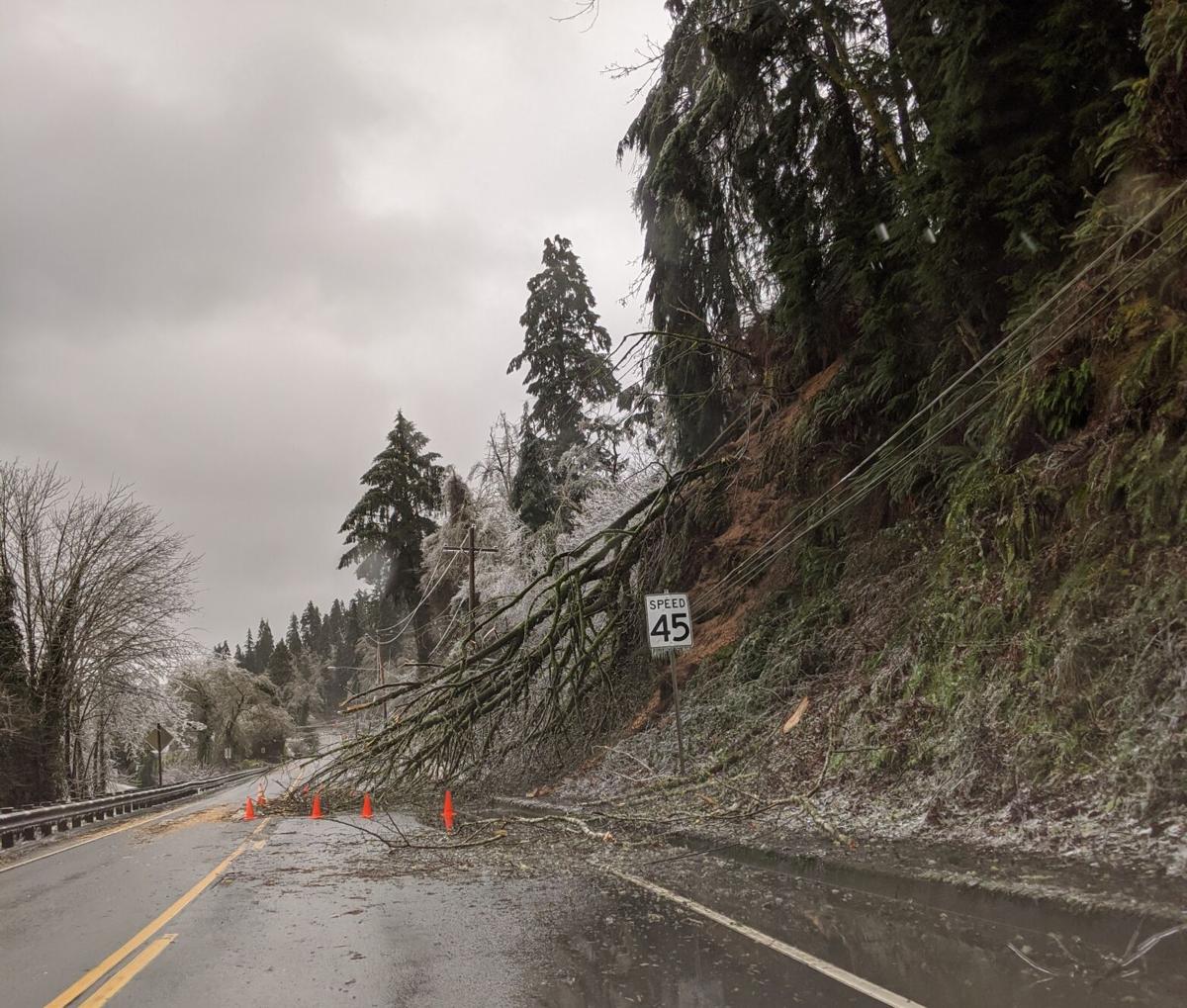 It was all the Astoria Fire Department could do to keep up with calls after a winter storm hit the North Coast.

The fire department, which responds to maybe three or four calls a day on average, fielded nearly 40 in two days — most of them related to downed trees and power lines from icy conditions Friday night and Saturday morning.

On his way to one call, Fire Chief Dan Crutchfield stopped to clear large tree branches off U.S. Highway 30 near 39th Street. More fell around him as he worked.

The freeze that hit Oregon over the weekend caused the largest power outage in the state’s history — worse even than outages that occurred during the September wildfires last year, according to state officials. Gov. Kate Brown declared a state of emergency in the Willamette Valley because of the severe weather. Some cities look “like war zones,” according to residents.

But the ice that struck the North Coast on Friday night melted by Saturday afternoon. Though Jewell saw around 6 inches of snow, roads were passable. As of Tuesday, Pacific Power maps no longer showed any major power outages in Clatsop County.

While winter weather persists elsewhere in Oregon, the only real evidence of the storm on the North Coast is the many shattered and fallen trees.

In neighborhoods, fallen boughs blocked driveways, dented cars and sometimes only narrowly missed causing damage to houses. In almost every neighborhood, there are trees bearing fresh scars where branches tore away under the weight of the ice. All day Monday, chainsaws buzzed and a steady stream of pickup trucks hauled debris to the Recology Western Oregon transfer station in Astoria.

Tree branches still litter roadsides. In some areas, little more than a path has been cleared to buildings. Cleanup efforts are likely to continue for several days, Crutchfield estimated on Tuesday.

The ice caught many North Coast residents and officials by surprise.

Going into the weekend, Crutchfield’s biggest concern was the possibility of heavy snowfall and making sure fire vehicles were properly equipped. But snow predicted to begin in Astoria on Thursday turned into rain. Forecasts still expected winter weather on Friday, though, and several school districts closed in anticipation of poor road conditions.

When the weather warmed and Friday dawned with only a light dusting of snow, Crutchfield relaxed. Later, though, freezing rain began to fall and did not stop. Ice coated tree limbs and encased emerging pink camellia blooms. Icicles formed along power lines.

“I got out, realized what was happening and knew we were in for a long night,” Crutchfield said.

Throughout the night and into the next morning, Astorians heard the ice tear trees apart.

The freezing rain happened at a particularly bad time for certain deciduous trees like maples and alders, said Jason Bigby, the owner of Bigby’s Tree Service in Astoria. The trees’ sap has just started to run, making them especially brittle, he said.

On Monday, his and other tree service companies were busy responding to calls from customers. In the afternoon, Bigby and his employees worked on an enormous laurel at Bill Brooks’ house off Franklin Avenue. Branches had broken and fallen into the yard. During the icy conditions, Brooks was worried about a completely different tree, one that ended up weathering the storm without any problem.

He said he sat on his porch in the early morning darkness and “listened to the forest dying.”

Longtime Astoria residents like Patrick Craig, who unloaded some laurel branches of his own at the transfer station Monday, can easily recall numerous destructive wind storms. But the last time Craig can remember ice causing so much damage is back in the late 1990s. That event was far worse, he recalled.

“The power was out for days and there were trees down everywhere,” he said.

This time, he feels Astoria got off relatively easy, although he was heartbroken that the ice took out a chunk of a Japanese maple he has tended for more than 20 years.

Crews cleared many fallen trees and branches from city park property Monday. There is ongoing concern about limbs that may have cracked but have yet to fall from trees. The city temporarily closed a portion of the Astoria Riverwalk east of the Columbia River Maritime Museum because limbs still dangled from cottonwood trees that line the path.

Trees are often more resilient during wind storms. “This was just a different kind of force,” he said.

In the Jewell area, deep snow prevented state forestry managers from venturing far into the Clatsop State Forest, but they could see very little ice damage. What damage does exist appears to be limited to a short stretch along state Highway 202.

“This is the most ice damage I have seen since 1996 but so far it appears to be fairly isolated,” said Ty Williams, the Astoria-based district operations coordinator for the state Department of Forestry.

Managers of GreenWood Resources’ holdings in Clatsop County saw cosmetic damage to alders in certain spots and will have to deal with the nuisance of clearing roads, but they saw “little influence on timberland property as a whole,” said Mark Morgans, area manager of the company’s Lewis & Clark Timberlands.

The damage “looks dramatic if it’s your favorite tree in a yard, park or around town,” Morgans said. “Even worse if it hit something valuable on its way down.”

In general, ice damages brittle hardwood more than conifers and the trees will respond as if they have been pruned, Morgans said. It’s not ideal if the portion damaged is the top of the tree but, Morgans added, “Trees are amazing and will keep reaching for the sky.”