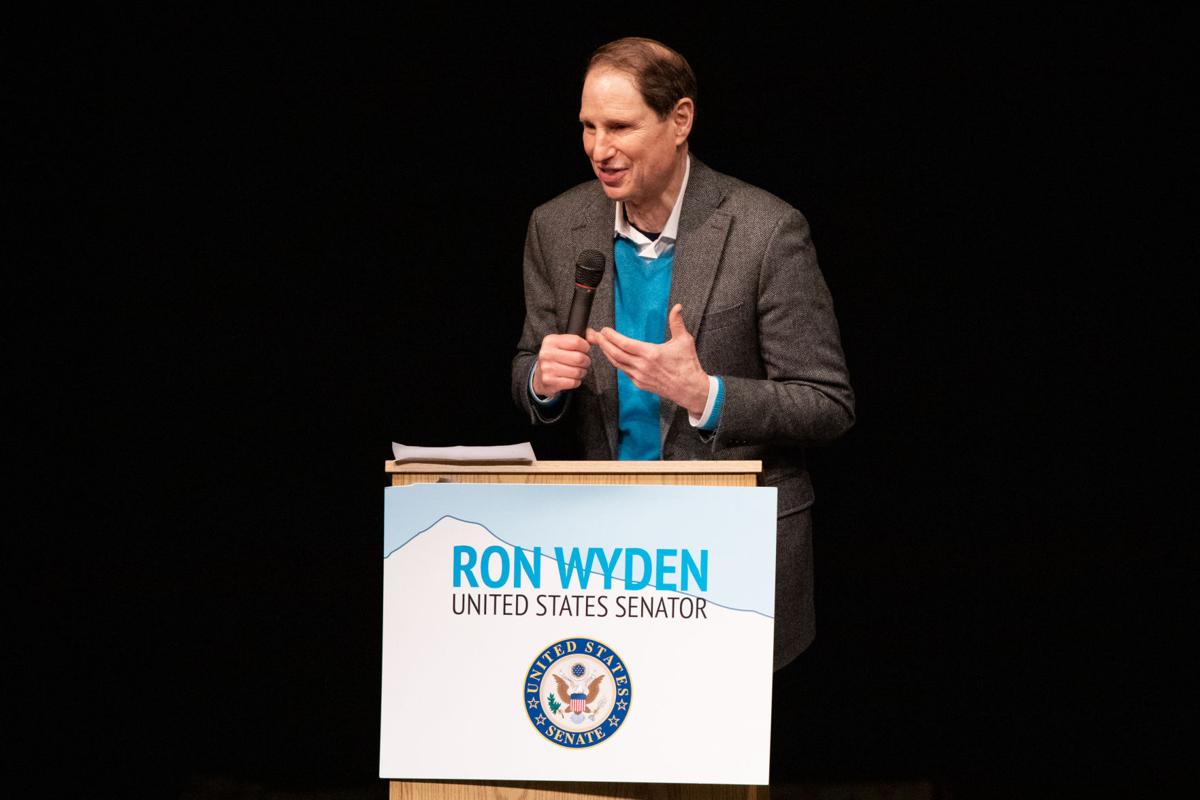 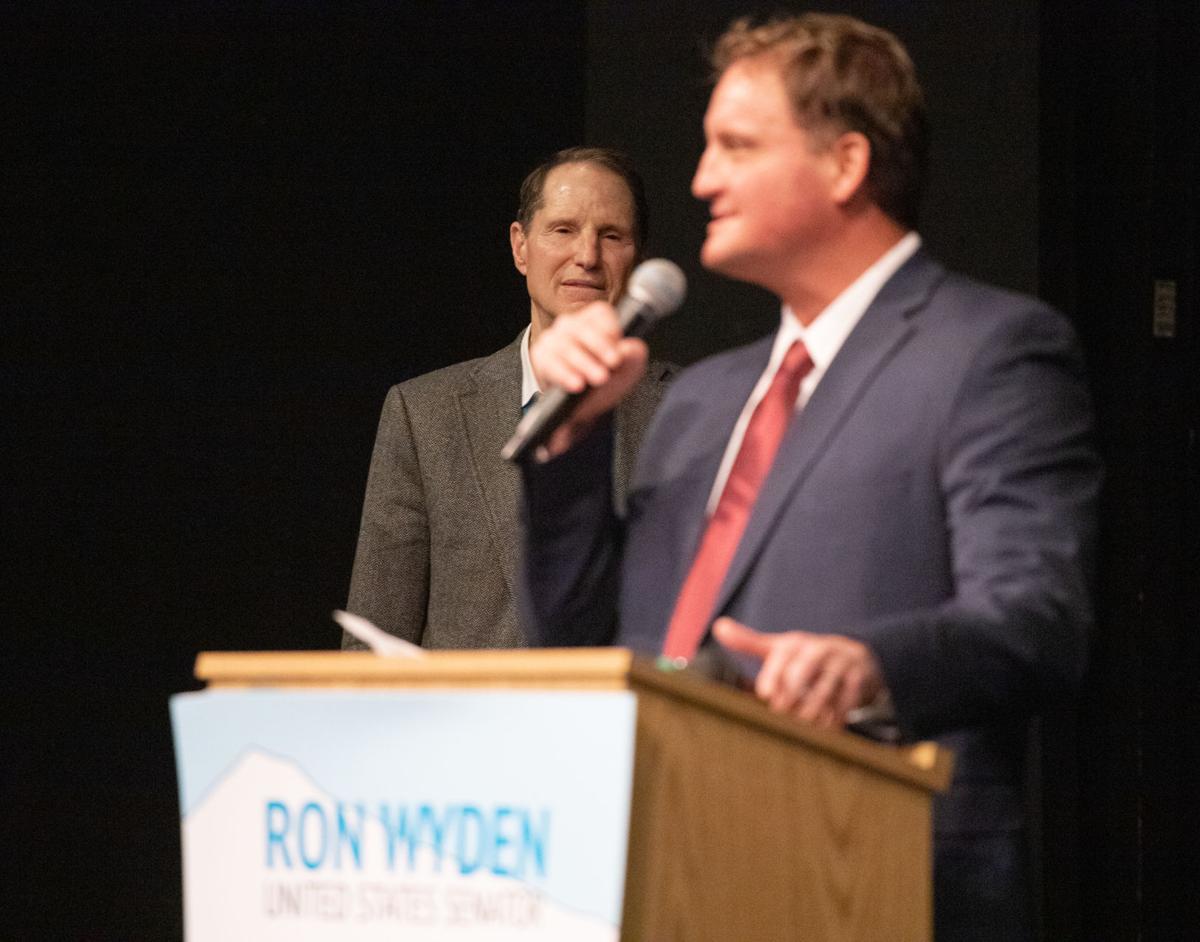 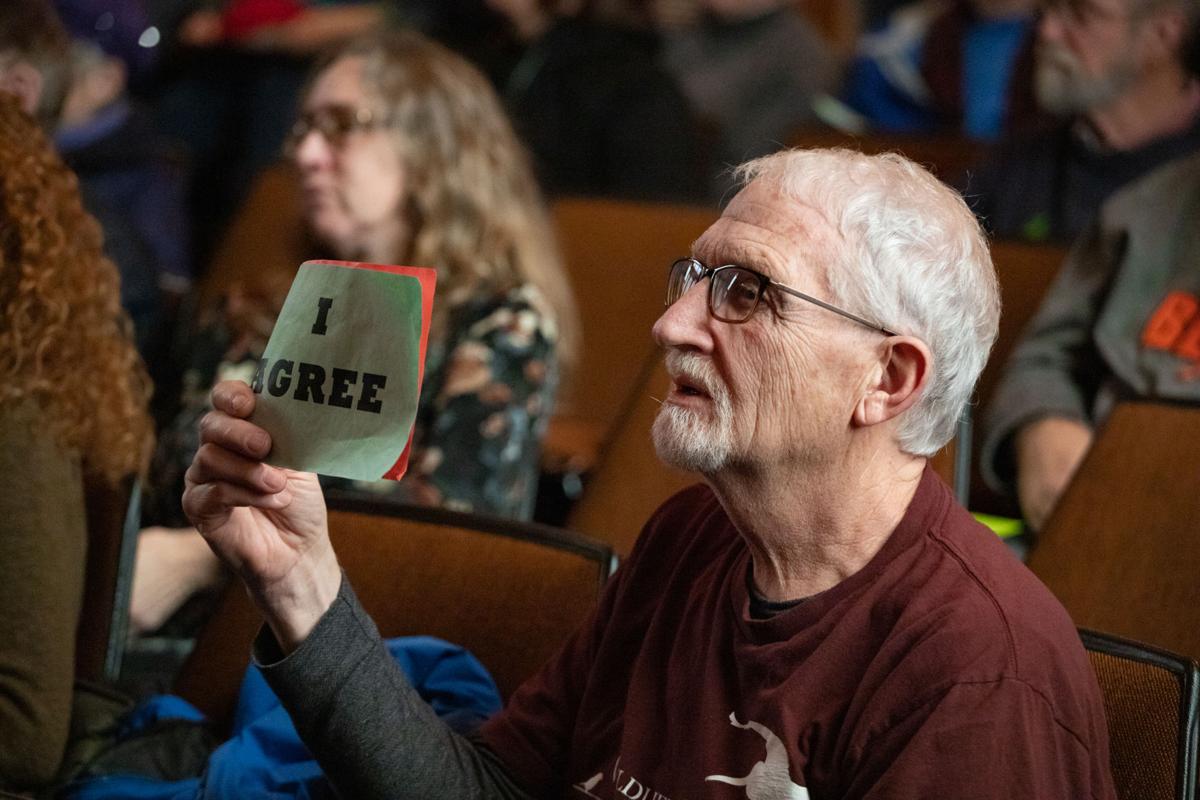 A town hall participant holds up a green 'I agree' sign to show his support for U.S. Sen. Ron Wyden.

U.S. Sen. Ron Wyden is the ranking member on the Senate Finance Committee. If Democrats win control of the Senate in the 2020 elections, the Oregon Democrat would become chairman of the committee, one of the most powerful posts in Congress.

During a town hall at the Clatsop Community College Performing Arts Center in Astoria on Thursday, Wyden said he would use that post to tackle tax breaks for fossil fuels, health care costs and infrastructure in what he has often termed “the Oregon way,” his moniker for bipartisanship.

Wyden called on Senate Majority Leader Mitch McConnell, R-Kentucky, and Senate Minority Leader Chuck Schumer, D-New York, to reach an agreement on how to conduct the impeachment trial of President Donald Trump. Republicans and Democrats have been at odds over whether to allow documents and witnesses in the trial.

“I want a just outcome, not a political outcome,” Wyden said.

One of the most divisive issues in rural Oregon last year was state House Bill 2020, which would have created the nation’s third carbon cap-and-trade system after California and the Northeast. The bill spawned a backlash in the form of advocacy group #TimberUnity and ultimately fell short of passing the state Senate.

Without mentioning the bill or the backlash, Wyden said he heard from rural Oregonians who seemed to think the legislation would put the state at a disadvantage.

“Given that I’ve heard those voices in the Oregon debate, I’m interested in taking a different approach,” he said.

Wyden was one of 26 senators last year who introduced the Clean Energy for America Act, which would consolidate 44 energy incentives in the federal tax code worth billions into three promoting clean electricity, clean transportation and energy efficiency. Taking away those tax breaks for fossil fuels and making a more competitive, efficient energy market is one of the first issues Wyden said he would tackle if he became chairman of the finance committee.

“You want a more efficient market, and you want less subsidies,” he said. “That’s what I’m proposing.”

The Senate Finance Committee has jurisdiction over more than $2 trillion in health care spending. Asked about his support for single-payer health care — specifically, the Medicare for All Act introduced by Sen. Bernie Sanders, the Vermont independent — Wyden stressed the number of people and proposals at the table.

“I’ve got at least four, maybe five colleagues on the committee who certainly would call themselves progressive Democrats who have their own approaches than Sen. Sanders does,” he said.

“I won’t quit until health care is a basic human right in this country,” he said.

Asked about infrastructure, Wyden touted Trump’s initial support for the need to invest more in projects. But Trump left infrastructure in the dust, he said, instead handing out $1.5 trillion in breaks to the rich and trying to destroy the Affordable Care Act.

“If I’m chairman of the finance committee, the first thing we’ll try to do is go back to having a bipartisan approach on infrastructure,” Wyden said.