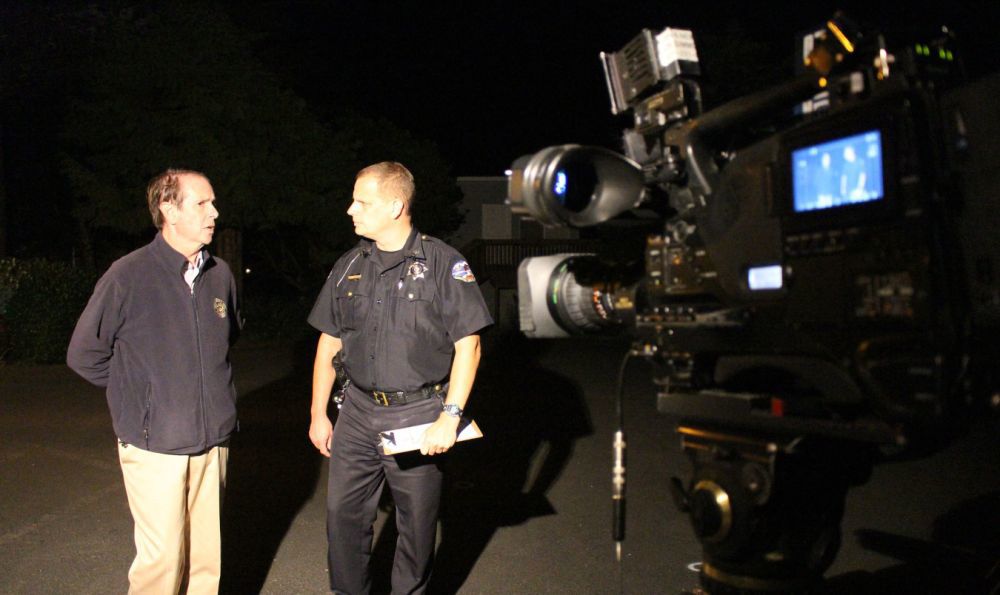 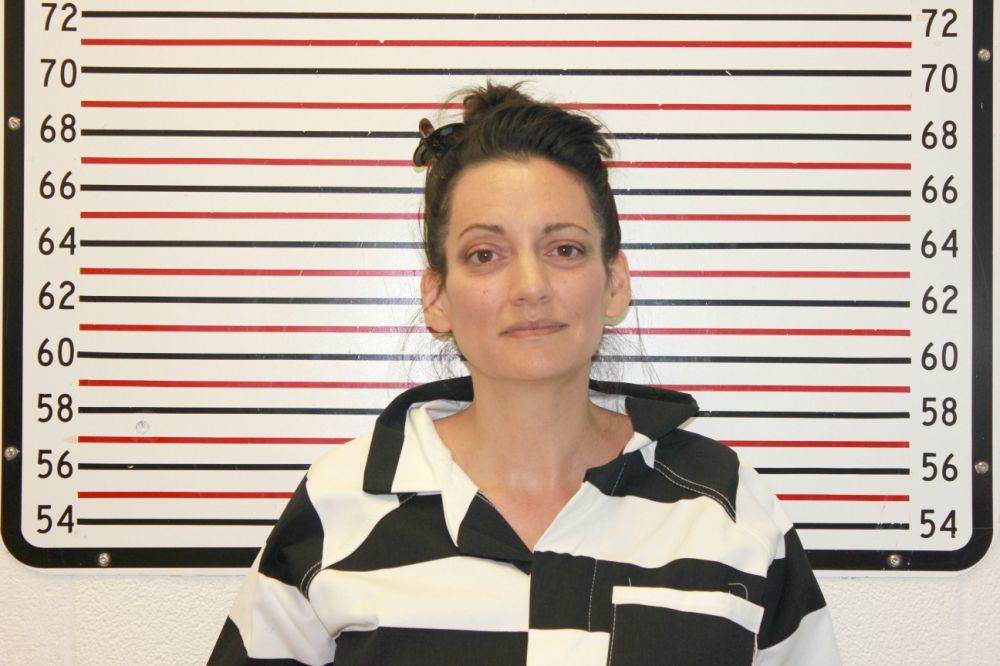 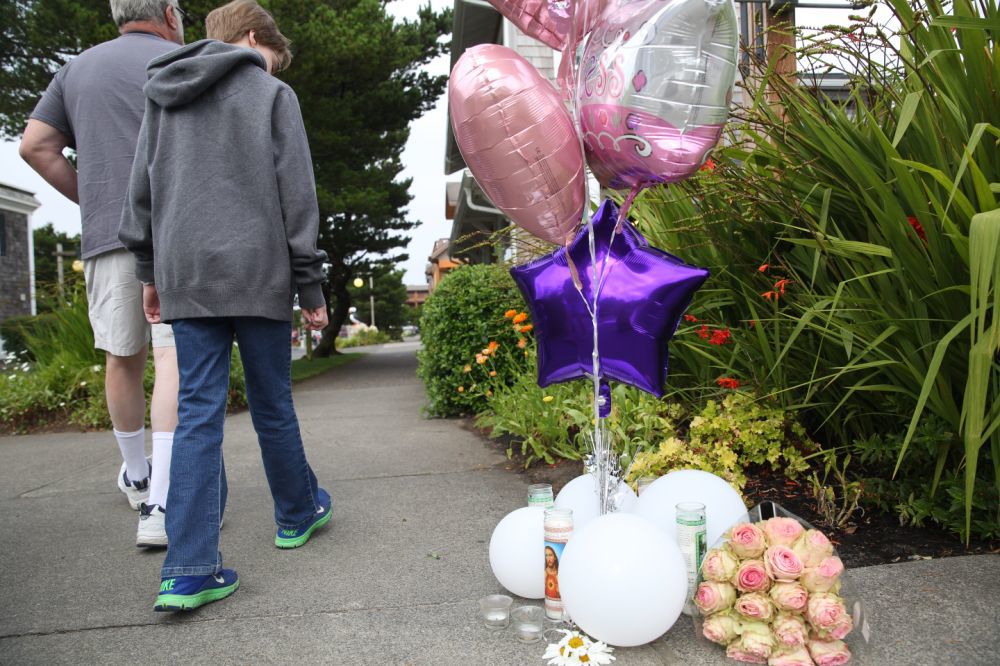 <p>People walk by a memorial at the Surfsand Resort in Cannon Beach Friday. The 13-year-old girl, later identified as Alana Smith, will survive after she was found seriously injured in a room of the coastal Oregon resort where her 2-year-old sister, Isabella Smith, was found dead Friday.</p> 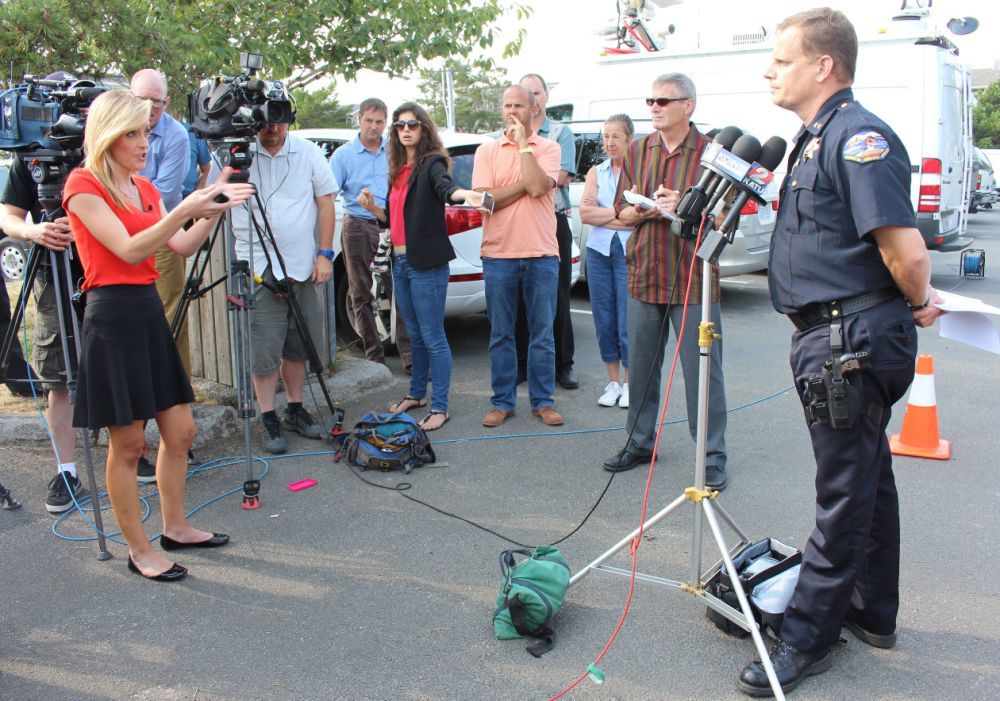 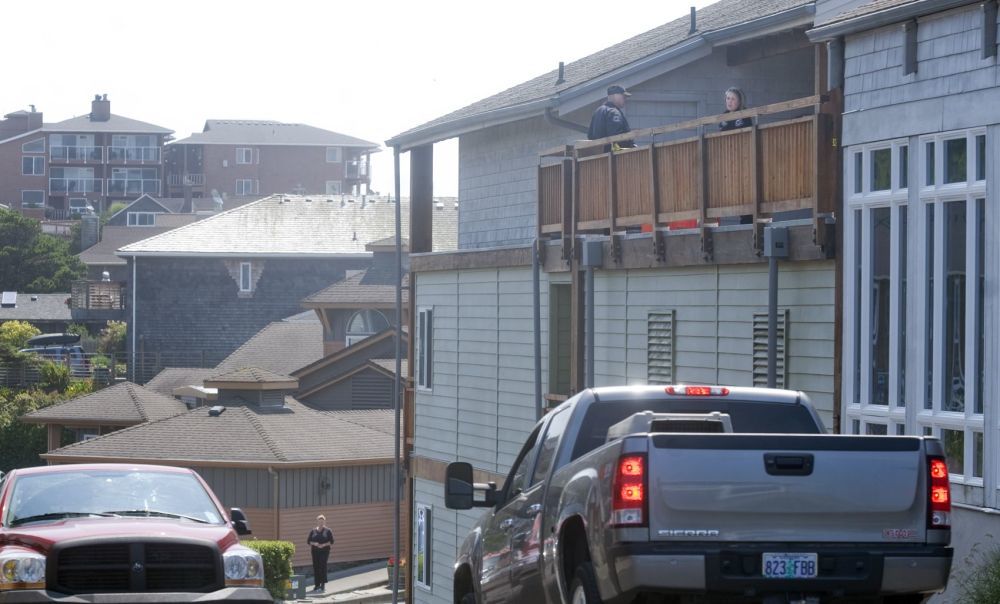 <p>A pair of Cannon Beach Police officers talk outside an upper-level room at the Surfsand Resort in Cannon Beach Friday where Isabella Smith, 2, was found dead and her sister, Alana Smith was seriously injured.</p> 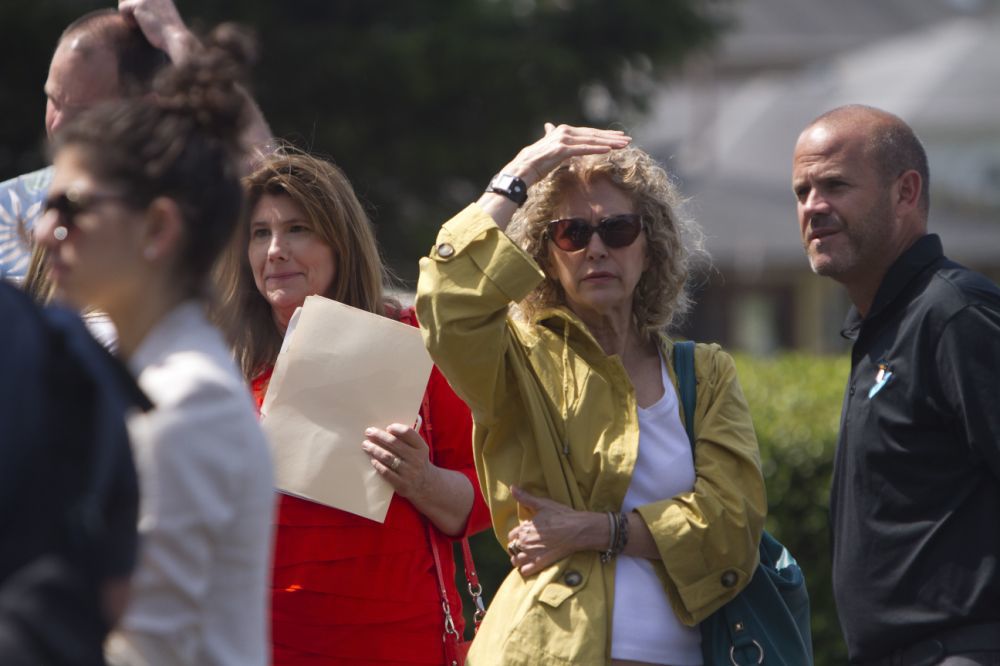 <p>Ryan Snyder, right, president of Martin Hospitality which owns the Surfsand Resort, and others listen to a news conference at Cannon Beach.</p> 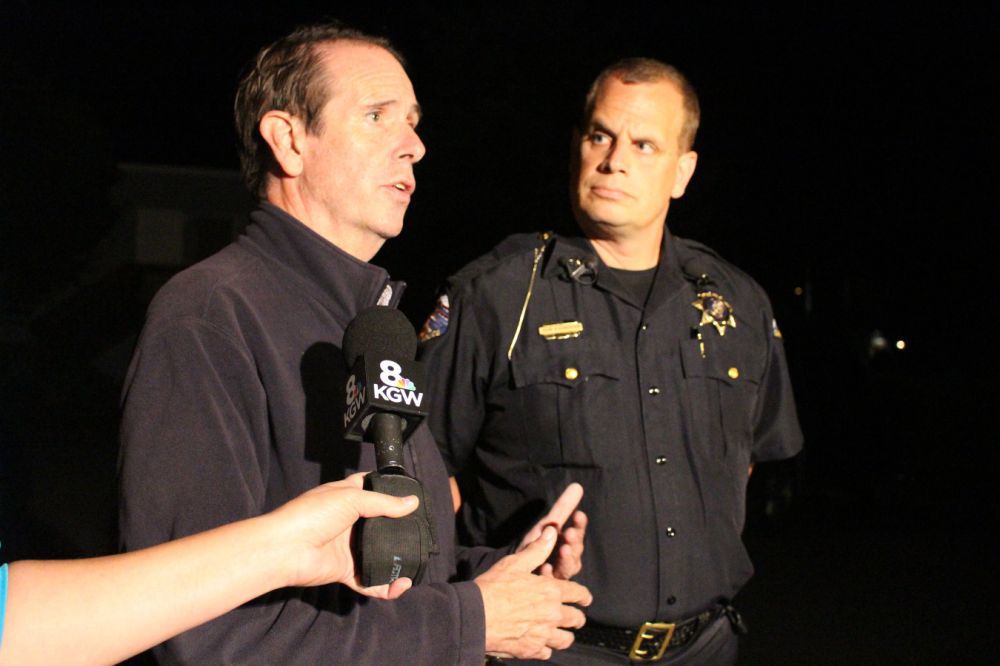 <p>People walk by a memorial at the Surfsand Resort in Cannon Beach Friday. The 13-year-old girl, later identified as Alana Smith, will survive after she was found seriously injured in a room of the coastal Oregon resort where her 2-year-old sister, Isabella Smith, was found dead Friday.</p>

<p>A pair of Cannon Beach Police officers talk outside an upper-level room at the Surfsand Resort in Cannon Beach Friday where Isabella Smith, 2, was found dead and her sister, Alana Smith was seriously injured.</p>

<p>Ryan Snyder, right, president of Martin Hospitality which owns the Surfsand Resort, and others listen to a news conference at Cannon Beach.</p>

Jessica Smith was found near her car  a gold 2007 Chevy Suburban that police agencies had been looking for  on a heavily forested logging road, just off of U.S. Highway 26, about 15 miles east of Cannon Beach. She was spotted by the U.S. Coast Guard Sector Columbia River, which was doing an aerial grid search at approximately 5:30 p.m. Sunday. She had been there since Friday, Schermerhorn said.

Jessica Smith appears to be in good health and is currently lodged in the Clatsop County Jail in Astoria, where she was taken without incident. She is expected to be arraigned Monday afternoon and charged with the aggravated murder of her 2-year-old daughter, Isabella Smith, and the attempted aggravated murder of her 13-year-old daughter, Alana Smith.

She will likely face a grand jury later this week, Marquis said.

Ive been doing this for over 20 years, and this is one of the most remarkable achievements of teamwork Ive seen, Marquis said.

It was the first homicide in Cannon Beach is nearly half a century, Schermerhorn remarked Saturday.

On July 30, Jessica Smith checked into a third-floor hotel room at the upscale Surfsand Resort with her two daughters.

Two days later, a pair of housekeepers discovered Isabella Smith dead and her older sister in critical condition after sustaining life-threatening cuts to her body.

The Cannon Beach Police Department and the major crime team began their investigation after receiving a call at about 9:40 a.m. Friday.

As I entered into the room, I saw a large amount of blood, said Schermerhorn, who was the first person to respond to the incident. There was blood throughout the room, different areas.

As far as he knows, all of the blood belonged to the teenager, he said.

Schermerhorn spoke briefly with Alana Smith while Cannon Beach Fire and Rescue and Medix Ambulance were treating her and getting her stabilized for transport. She was able to answer basic questions: where her injuries were, what kind of pain she was in, who her little sister was, etc.

It was very hard for her to talk at the time, he said. We did ask certain questions, but we werent able to get answers on everything.

Alana Smith is in stable condition and recovering from her serious injuries after being transported via LifeFlight helicopter to Doernbecher Childrens Hospital in Portland, where she underwent surgery. She has since been interviewed by detectives, but police have not disclosed any information so far.

Alana has learned her mother was found unharmed. Marquis said the Department of Human Services will decide where Alana Smith will live once shes released from the hospital, which may be in a few days.

The Oregon State Medical Examiner performed an autopsy on Isabella Smiths body Sunday and ruled her death a homicide.

The cause of death is still unknown, and the infants body showed no signs of abuse. Law enforcement agencies are awaiting toxicology results, which may take weeks to obtain, Marquis said.

Hours before she was taken into custody, an arrest warrant was issued for Jessica Smith, who was considered armed and dangerous. No weapons were found on her when she was apprehended.

Investigators spoke with Surfsand Resort employees and the occupants of neighboring rooms to help establish a time line and the conditions surrounding the crime.

A search warrant was served on Jessica Smiths hotel room Friday night, where there was no sign of forced entry, Schermerhorn said. The crime scene has since been cleared.

Gregory Smith spoke with Oregon State Police detectives during the weekend and has been cooperative throughout the investigation, Schermerhorn said.

Neither the police chief nor the district attorney commented on the couples marital or custody issues, or Jessica Smiths mental health.

Asked if the arrest brings closure to the matter, Marquis said that, in his business, they dont use the word closure.

Theres sometimes finality, and you can bring resolution to things, but you dont lose a 2-year-old child and have this happen to a 13-year-old and get closure. It just doesnt happen, he said.

In Oregon, aggravated murder is the most severe form of murder and can potentially carry a death sentence, but its way too early to discuss that possibility, Marquis said.

The investigation, he added, has just begun. This is a marathon, not a sprint. We will be developing information for weeks, if not months.

I think its obviously very shocking, not only to a particularly peaceful community like Cannon Beach where, at least in everybodys memory, this has never happened, but, really, for probably the whole coastal community, Marquis said.

Schermerhorn expressed his gratitude for the other agencies assistance. The Cannon Beach Police Department worked with federal agencies, as well, including the U.S. Coast Guard, the Federal Bureau of Investigation and the U.S. Marshals Service.

When a reporter observed Friday that this kind of crime doesnt normally happen in Cannon Beach, Schermerhorn responded, No, it doesnt. And its certainly not something that you want to happen anywhere.

Chelsea Gorrow of The Daily Astorian assisted with this story.