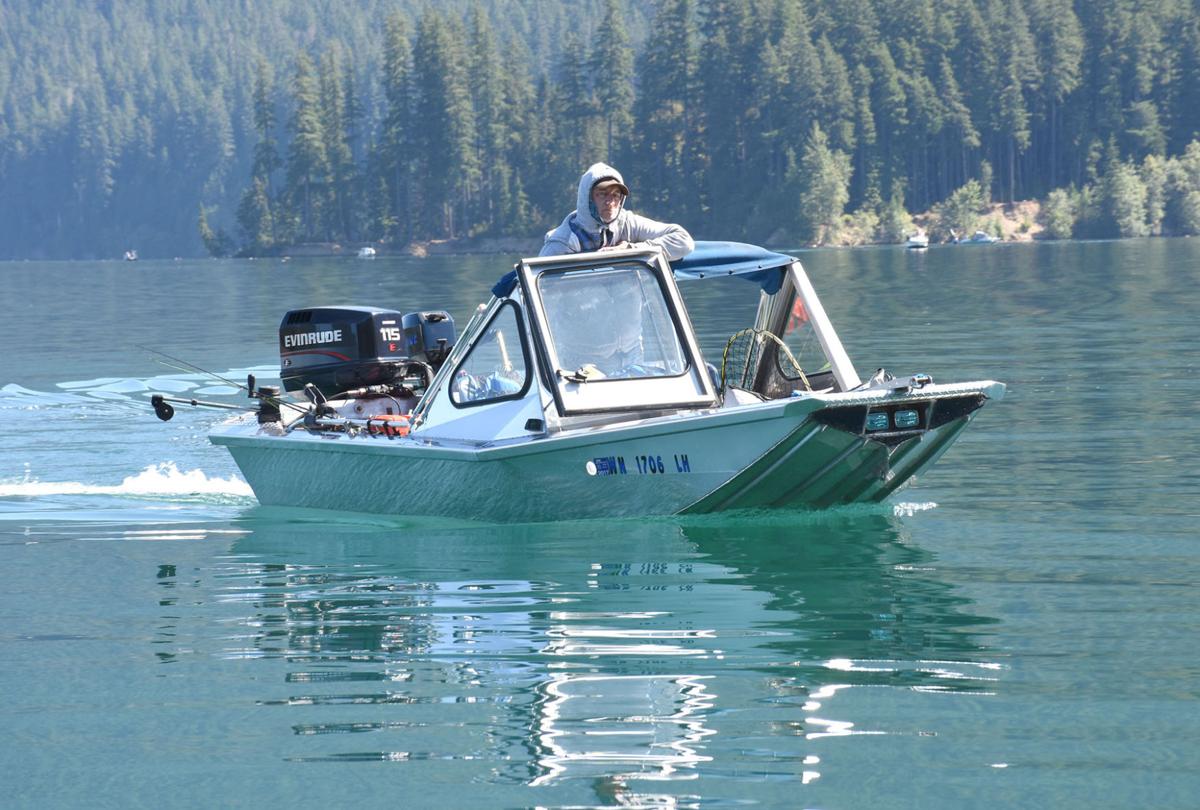 Greg Howell boats back to shore after catching four fish in Baker Lake. Howell said that the sockeye were jumping in July. 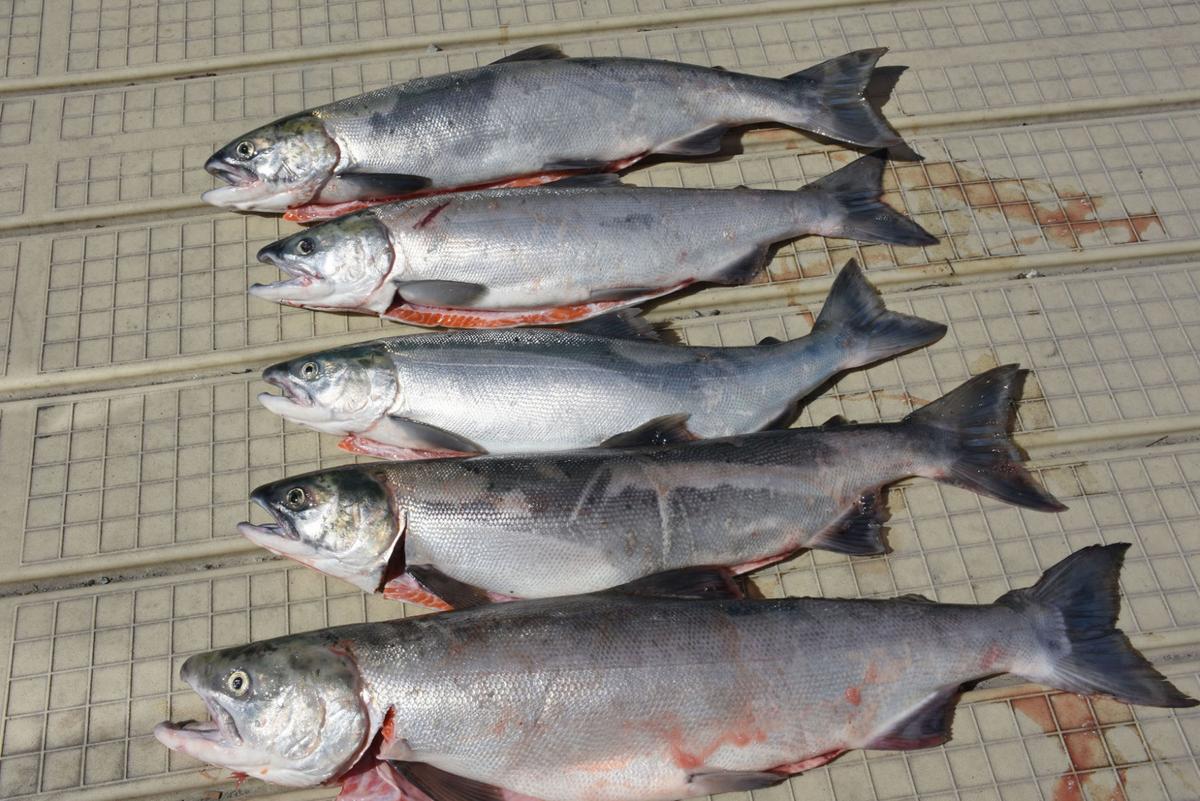 Greg Howell boats back to shore after catching four fish in Baker Lake. Howell said that the sockeye were jumping in July.

MOUNT VERNON, Wash. — Although the region’s salmon fisheries are well into their summer seasons, much turmoil remains concerning the management of the state’s fisheries.

Fishermen lost time on area rivers and lakes this spring because the state and tribes had trouble reaching an agreement on seasons and allotments.

Those in fisheries-related businesses were hurt because of the uncertainty over whether fishing would be allowed at all.

Others feel the fisheries conflict drowned out other issues, such as the battle to bring a catch-and-release steelhead fishery back to the upper Skagit River, reported the Skagit Valley Herald.

This year marked the first time in about 30 years that the treaty tribes and the state Department of Fish and Wildlife, which co-manage the region’s fisheries, failed to reach an agreement on seasons and allotments by their usual deadline, putting the summer fisheries in doubt.

With an agreement reached in mid-May and approved by the National Oceanic and Atmospheric Administration in mid-June, the summer seasons started at their usual time. That was good news for fishermen.

Baker Lake is a hot spot for those sockeye, with dozens of boat trailers parked at campgrounds around the lake on any given day.

“This is a good lake for it. Well, the whole upper valley is good for fishing,” said Leslie Bates after coming in off the lake July 21 with her husband Lawrence Bates.

Jay Van Putten, a fisherman from Bow, said the salmon opportunities now available at Baker Lake and in Puget Sound are a relief to area fishermen.

“They were talking about not opening it at all, and that really had people upset,” he said.

That frustration over how the seasons and allotments are set remains.

“Things need to change. Our state needs to do a better job of catering to the hunters and fishermen … We seem to be getting less and less every year,” Van Putten said.

Sen. Kirk Pearson, R-Monroe, who chairs the state Senate Natural Resources and Parks Committee, said he heard from many fishermen and fisheries-related businesses while negotiations for the salmon seasons dragged on.

“There was a lot of concern from those on the business side,” he said. “To have that fishery (opened) was vital for our economy.”

Brett Rosson, who owns a fishing charter company in Anacortes, said while the marine fishing seasons opened as usual, the uncertainty surrounding the fisheries meant about a third fewer fishermen than usual booked trips for July.

Another concern are the restrictions that came with the fisheries agreement, including that wild coho salmon caught in marine areas can’t be kept because coho returning to Puget Sound streams this year came back undersized and in low numbers.

“The most substantial changes to Puget Sound marine fishing is that all coho must be released,” Fish & Wildlife recreational salmon fishery manager Ryan Lothrop said, noting exceptions for Hood Canal, Sinclair Inlet and Dungeness Bay. “Additionally, most marine areas were closed to salmon fishing in September and October to protect returning wild coho.”

For July, wild Chinook also had to be released in marine area 7, which includes waters around the San Juan Islands and along Whatcom and Skagit counties.

The requirement to throw back wild fish hasn’t been popular among recreational fishermen. Rosson’s customers have not been able to keep about 60 percent of the fish caught this year.

“People want to come out and catch a salmon in the Pacific Northwest and now they have to throw it back,” he said.

While approval of the summer marine seasons was pending, area rivers and lakes where salmon are found were closed as a precaution, costing freshwater fishermen about seven weeks on the water.

“If you look around in your backyard, that’s probably where the most opportunity was lost, was in the Skagit,” Hughes said.

“The chance of hooking even one fish, one Chinook, shut down all fisheries,” he said. “It was a detriment to all areas. Any lake and river that were connected to the Puget Sound that any of the (Endangered Species Act) listed fish could get to were not allowed to be open for any fishing.”

While there was excitement when the affected freshwater fisheries opened June 24, Garner said fishermen are bracing for early closures this fall — another measure to protect coho returning to rivers to spawn.

“(Fish & Wildlife) needs to really be on top of it for the next year to make sure this does not happen again,” Garner said.

The state and tribes will again work together on setting salmon seasons for next year.

With salmon in the spotlight, a group of fishermen who cast hookless lines into the Skagit River each spring in tribute to when the river could be fished for steelhead say their message has gone unheard.

Members of the group, who call themselves Occupy Skagit, hold this annual event on the banks of the Skagit River near Rockport to advocate for the right to fish the rivers of their childhood.

Occupy Skagit wants to see a steelhead trout catch-and-release fishery on the Skagit River, and says the state’s data shows the river could support the fishery.

Wild runs of steelhead have surpassed the 6,000 escapement goal set by the fishery management plan since 2012, according to Fish & Wildlife data. Escapement, or the number of adult fish that return to a stream to spawn, is used to measure the health of a fishery.

Curt Kraemer, a former biologist with Fish & Wildlife and now a member of Occupy Skagit, helped bring a catch-and-release season to the Sauk River.

“To get more people connected to the resource, catching and releasing those fish produced a lot more passionate anglers,” he said.

Occupy Skagit member Wayne Cline said because of what he calls “Salmageddon” — the battle over fishing seasons and allotments that play out at the state, tribal and federal levels — the group feels its cause is on the state’s back burner.

Steelhead in the Puget Sound have been protected under the federal Endangered Species Act since 2007.

In 2008, the state put the Washington Statewide Steelhead Management Plan into action. Under this plan, steelhead fisheries went from various levels of catch and release to entirely closed in 2010.

That means before opening any steelhead fisheries, including catch and release, approval is needed from NOAA.

“We still don’t have a permit that allows (fishing for steelhead). That’s the bottom line,” Hoffman said.

Fish & Wildlife has plans to ask for NOAA approval based on the good escapement numbers in recent years.

“We do feel that there are enough fish there to be able to provide some opportunity and we’re working with the co-managers to figure out how much, and then we’ll be asking to NOAA to see if they agree with that,” Hoffman said.

NOAA Fisheries spokesman Michael Milstein said if the state and tribes submit a proposal for reopening the fishery, the request will go through a public review process.

The hatchery side of fisheries management has its own complications, with the potential for the Skagit River to become one of three rivers in the Puget Sound region selected as a wild steelhead gene bank.

Gene banks are intended to allow wild fish species to recover without interference from hatchery fish. If a river is a designated a steelhead gene bank, no steelhead hatchery operations will be allowed.

Fish & Wildlife had been expected to pick the rivers in March, but the selection has been delayed.

“There were quite a few folks really wanting to see a gene bank in the Skagit and a lot of folks who really wanted to preserve (fishing) opportunities in the Skagit ... that polar opposite input kind of slowed us down,” Fish & Wildlife’s Hoffman said.

To further complicate matters, the state and tribes are discussing the potential for an integrated hatchery program, which would use wild fish to produce the next generation.

Because designating the river as a gene bank would preclude hatchery operations, the state is waiting until a conclusion on an integrated hatchery is reached before moving the gene bank selection process forward, Hoffman said.

In the absence of a steelhead fishery today, Occupy Skagit leadership is encouraging youths to get involved with the cause, citing a need for the younger generation to continue highlighting the issue to gain the attention of fisheries managers.

“If there’s somebody in Skagit County who’s just got their driver’s license in the last few years, there’s a good chance they’ve never seen a wild steelhead,” Cline said. “So who’s going to care when all the gray-hair guys are gone?”