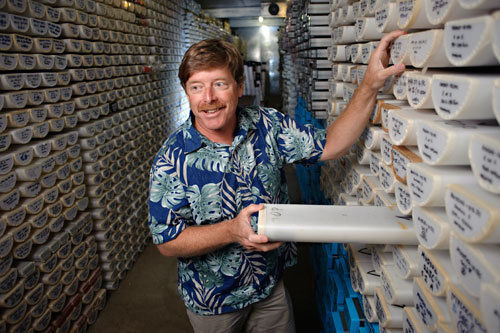 Professor Chris Goldfinger with cores at the OSU Marine Geology Repository, operated as a national facility for the National Science Foundation. 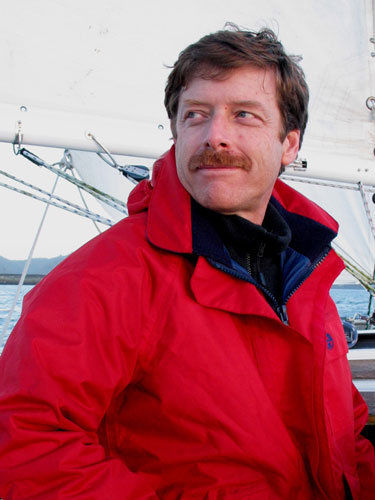 Professor Chris Goldfinger with cores at the OSU Marine Geology Repository, operated as a national facility for the National Science Foundation.

Using data with an unprecedented level of detail, a team of international researchers, including some from Oregon State University, have found that a major earthquake along the Cascadia Subduction Zone is more likely than previously thought.

The team also found that quakes along the subduction zone happen more frequently and some of the region’s largest population centers, including Portland and Seattle, are overdue for a rupture.

“These new results are based on much better data than has been available before, and reinforce our confidence in findings regarding the potential for major earthquakes on the Cascadia Subduction Zone,” Chris Goldfinger, a leading expert on tectonic activity and professor of earth sciences at Oregon State, said in a statement.

“With more detailed data we have also changed somewhat our projections for the average recurrence interval of earthquakes on the subduction zone, especially the northern parts. The frequency, although not the intensity, of earthquakes there appears to be somewhat higher than we previously estimated,” he added.

The subduction zone, which runs from Northern California to British Columbia, is broken up into four sections. Projections for earthquakes in the southern sections, south of Newport, have stayed the same, but from Newport northward experts believe the likelihood of a significant quake are greater than previously believed.

Using nearly 200 core samples of underwater landslide deposits, left behind by past subduction zone earthquakes, Goldfinger and his team, which included scientists from Canada and Spain, have found that the northern sections are coming due for a shaker. Previous studies were based on as few as 12 core samples.

The section that runs from Newport to Astoria was previously thought to rupture about every 400 to 500 years, but the new data shows that interval is closer to 350 years. The northernmost section, from Astoria to Vancouver Island in British Columbia, had its quake frequency revised down from an earthquake every 500 to 530 years down to one every 430 years.

The last time the subduction zone saw a major quake where the entire zone ruptures, which scientists have been able to pin down because it caused a tsunami that traveled across the Pacific ocean to Japan, was in 1700, 316 years ago.

“What this work shows is that, contrary to some previous estimates, the two middle sections of the Cascadia Subduction Zone that affect most of Oregon have a frequency that’s more similar than different,” Goldfinger said.

Given that data, the chances of a quake hitting the central Oregon region in the next 50 years have been upgraded as well, going from between 14 and 17 percent to between 15 and 20 percent.

The Cascadia Subduction Zone has long been studied by experts, but it gained prominence in the mainstream last year after Kathryn Schulz’s Pulitzer Prize winning feature in The New Yorker on the perils facing the Pacific Northwest.

“What’s important is that these findings give us more confidence about what’s coming in our future.”

As Schulz and others have pointed out, it won’t just be the ground shaking that causes the most destruction. The ensuing tsunami that would likely follow a major quake, which could be stronger than a magnitude 9.0, would wreak just as much, if not more, damage than the quake itself.

The death toll could reach as high as 10,000 from the combined earthquake and tsunami should the big one hit, some 85,000 buildings could be damaged and the rebuild costs could top $32 billion.

The new elevated risk comes as Oregon State moves forward with plans to build a $50 million marine sciences facility in Newport at the mouth of Yaquina Bay, squarely in the path of tsunami. Goldfinger has protested the plan, calling it “completely inexplicable” and questioned why the school would ignore the relevant science showing the risk to the structure.

University administrators, however, have pushed ahead with the 100,000 square foot facility at the Hatfield Marine Science Center campus in Newport, saying the building will be able to withstand a magnitude 9.0 quake and provide shelter for its students and staff.

Building issues aside, the new research has helped Goldfinger and others in the earth sciences refine projections for when the Pacific Northwest can expect to feel its next quake.

“Part of what’s important is that these findings give us more confidence about what’s coming in our future,” Goldfinger said. “Now we have a great deal more certainty that the general concern about earthquakes caused by the Cascadia Subduction Zone is scientifically valid, and we also have more precise information about the earthquake frequency and behavior of the subduction zone.”