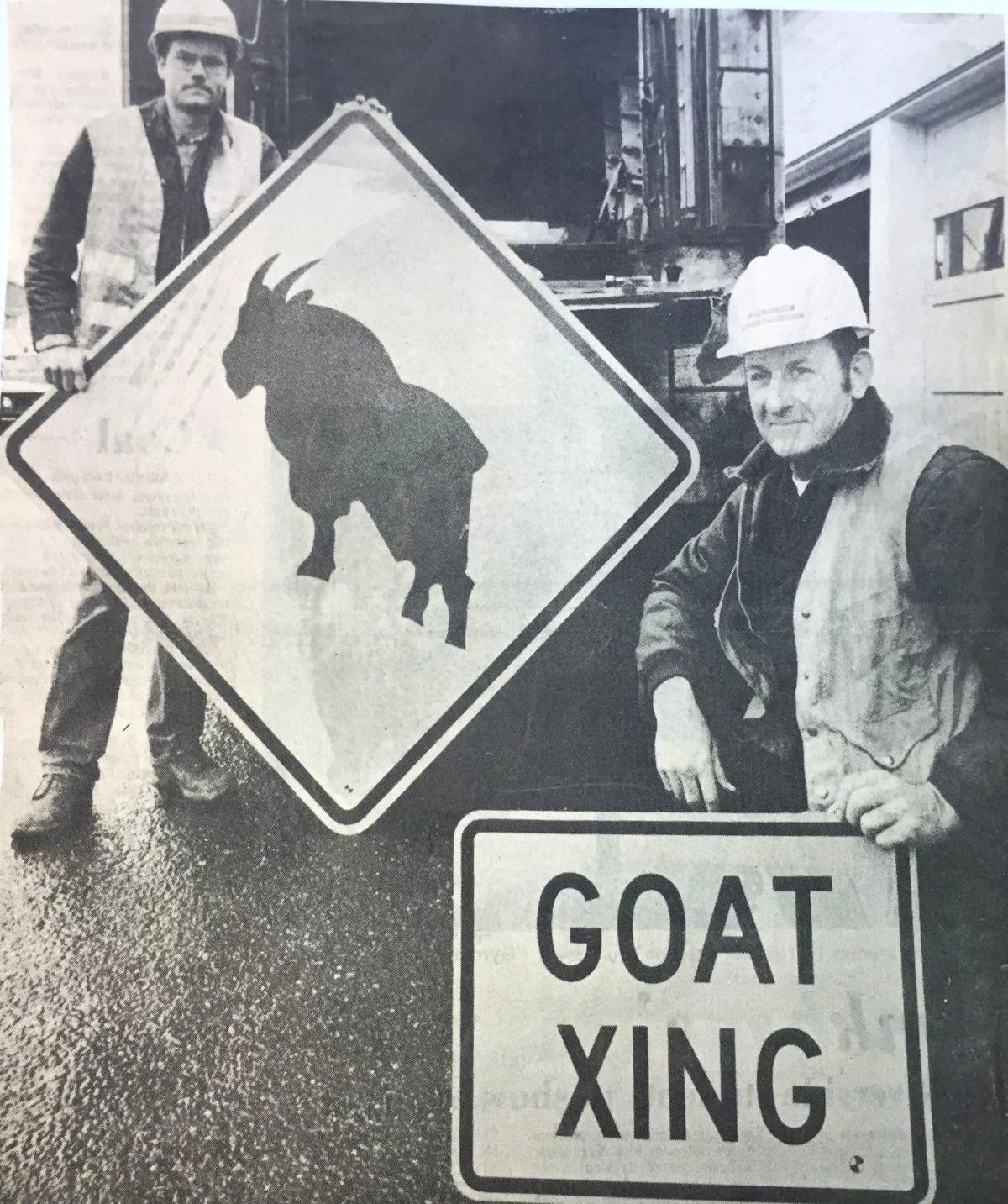 In this undated photo, state highway workers install goat crossing signs on Interstate 5 in Roseburg. It's been more than 35 years since the world famous Mount Nebo weather goats found new homes after spending many years unknowingly forecasting the weather by their location on the mountain across the river from downtown Roseburg. 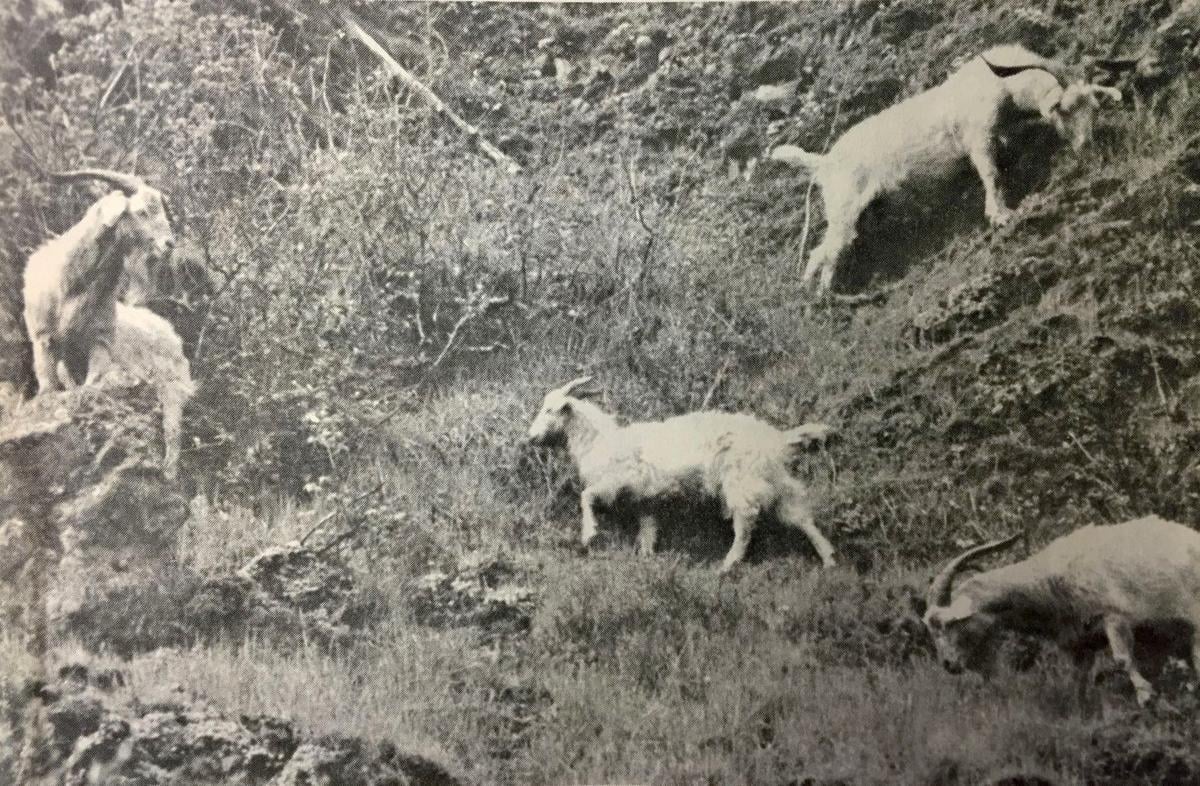 This image taken in the 1970s shows weather goats on Mount Nebo in Roseburg.

In this undated photo, state highway workers install goat crossing signs on Interstate 5 in Roseburg. It's been more than 35 years since the world famous Mount Nebo weather goats found new homes after spending many years unknowingly forecasting the weather by their location on the mountain across the river from downtown Roseburg.

This image taken in the 1970s shows weather goats on Mount Nebo in Roseburg.

ROSEBURG — It’s been more than 35 years since the world famous Mount Nebo weather goats found new homes after spending many years unknowingly forecasting the weather by their location on the mountain across the river from downtown Roseburg.

The herd consisted of only a small group of Angora goats originally. They were the true weather goats. But over the years, other goats joined the herd and followed the Angoras around the mountain.

From 1965 to 1979, the goats roamed Mount Nebo, and eventually, people who watched the herd, figured out they could get a good idea what the weather was going to be like the next day from the goats’ movements. Those who kept track said the goats were about 90 percent right.

If the goats were at the top of the mountain, it was likely going to be dry and sunny the next day. And if they were down low, rain was likely on the way.

Ed Eaton was a teacher at Rose Elementary School in Roseburg and his classes had a good view of Nebo and its four-legged inhabitants. He used the weather-predicting goats as a science project to see how accurate they were. He said they were pretty accurate.

“Yeah they were, it was funnier than heck, and the kids got a kick out of it,” said Eaton. “I don’t know the percentage, but it was pretty dang high.”

During their days of glory, and after KRSB-FM Radio began doing a goat forecast, the goats became internationally known for their forecasting skills.

The forecast might be “scattered goats,” which was mostly sunny, or a “low goat system,” which meant wet weather was approaching.

The story was picked up by NBC-TV News, and then other media from around the world picked it up.

But when Interstate 5 was redone around the base of Mount Nebo, the face of the mountain was altered and it made it tougher for the goats to navigate the hillside. They became attracted to the tasty, green grass by the freeway intersection, which led to traffic problems. After a few goats were hit by traffic, officials decided they needed to do something.

They tried to fence the goats in, but the goats easily figured out how to get through or around that obstacle. So officials conducted a goat round-up and adopted out about half of the herd. The others went to a ranch north of Roseburg.

Roseburg attorney Charles Lee got involved in a goat controversy in 1978 when he was a prosecutor with the District Attorney’s office. He got the case involving two Lane County teens who were arrested for shooting a couple of goats with a bow and arrow. He said the public outcry was sympathetic toward the goats and called for the District Attorney’s office to prosecute. But it wasn’t that easy.

“Animal protection laws were different, and I had a hard time finding a crime,” said Lee. “The owner of the property didn’t want to claim the goats belonged to him, which would have made it a theft or livestock offense, because he didn’t want to be responsible if they caused damage.”

A 19-year-old from Springfield was eventually charged with “taking up an estray without first notifying the Department of Agriculture.” But that charge was dismissed and he was charged instead with leaving an animal carcass in a field, a Class A Misdemeanor. He was fined $505.

The juvenile in the case was not charged in adult court.

In February of 1978, two goats were killed by a car on Interstate 5 and that prompted the highway department to put up a goat crossing sign, thought to be the only one in the country at that time.

Retired Roseburg veterinarian Dr. Don Bailey has a vivid memory of the goats.

“I’ve been accused of causing the whole thing down there,” he said with a laugh.

He said a school in the Eugene area had a mascot goat they wanted to get rid of and wanted to leave it at Wildlife Safari, but Bailey told the school that would not be good to have a domestic goat with the exotic animals there.

“I said as you go by Mount Nebo, just stop and turn it loose, and they did,” he said. The offspring turned into a herd of gentle goats that ended up eating grass along the freeway, and occasionally flowers and shrubs in gardens, instead of predicting weather on the mountain.

Bailey also remembers climbing the face of the mountain to catch the goat that had been shot by an arrow. He found it and took the arrow out, then gave it a shot of penicillin and he said it was fine.

He also remembered two Roseburg boys that decided to have some fun with the weatherman and put a plywood mannequin of a goat on the mountain.

“The weatherman kept saying, the weather hasn’t changed a bit according to the goats,” Bailey said. “He eventually figured out the mannequin wasn’t moving at all.”

The goats are now just part of the colorful history of the Umpqua Valley, but many local residents still remember them well, and all the attention they brought to the area back in the 1960s and ’70s.