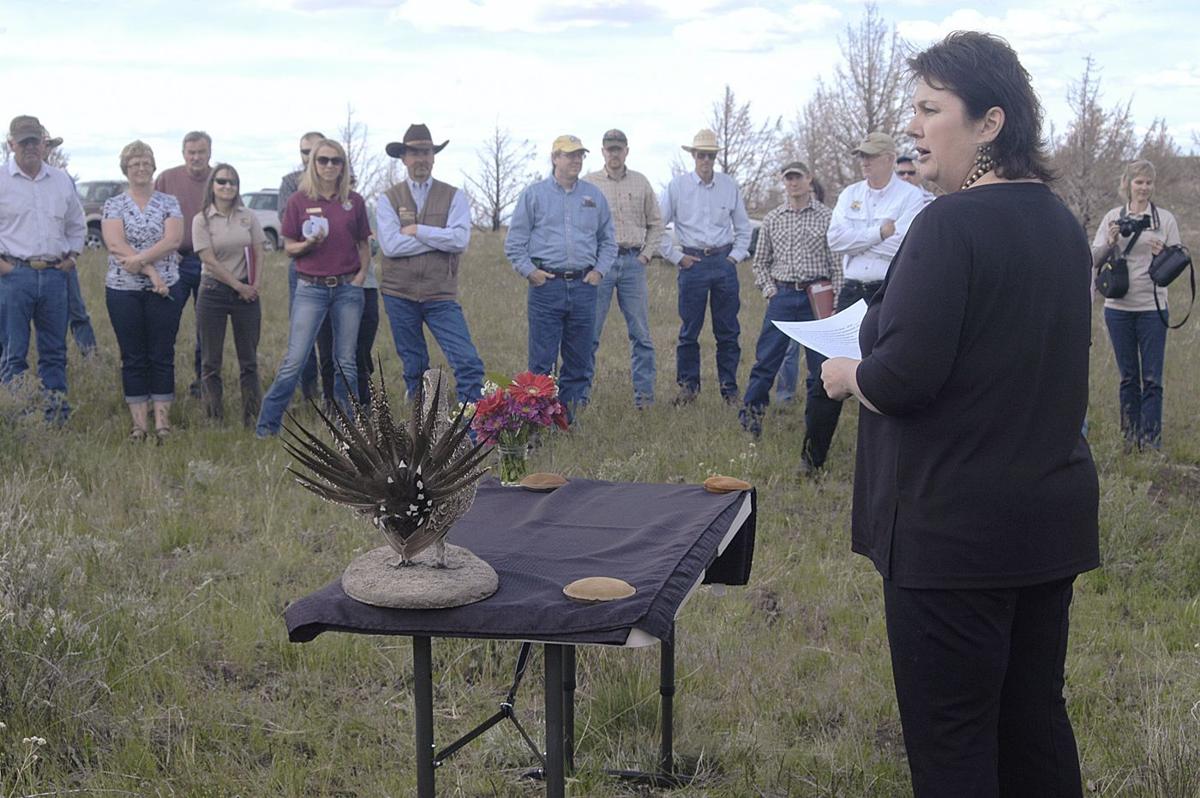 Eric Mortenson/Capital Press Marty Suter-Goold, manager of the Harney County Soil and Water Conservation District, talks with ranchers and federal agency officials at the ceremony to sign an agreement aimed at protecting the habitat of the greater sage grouse on a large swath of private land in Eastern Oregon. She said trust between ranchers and federal officials was key to a sage grouse habitat agreement. 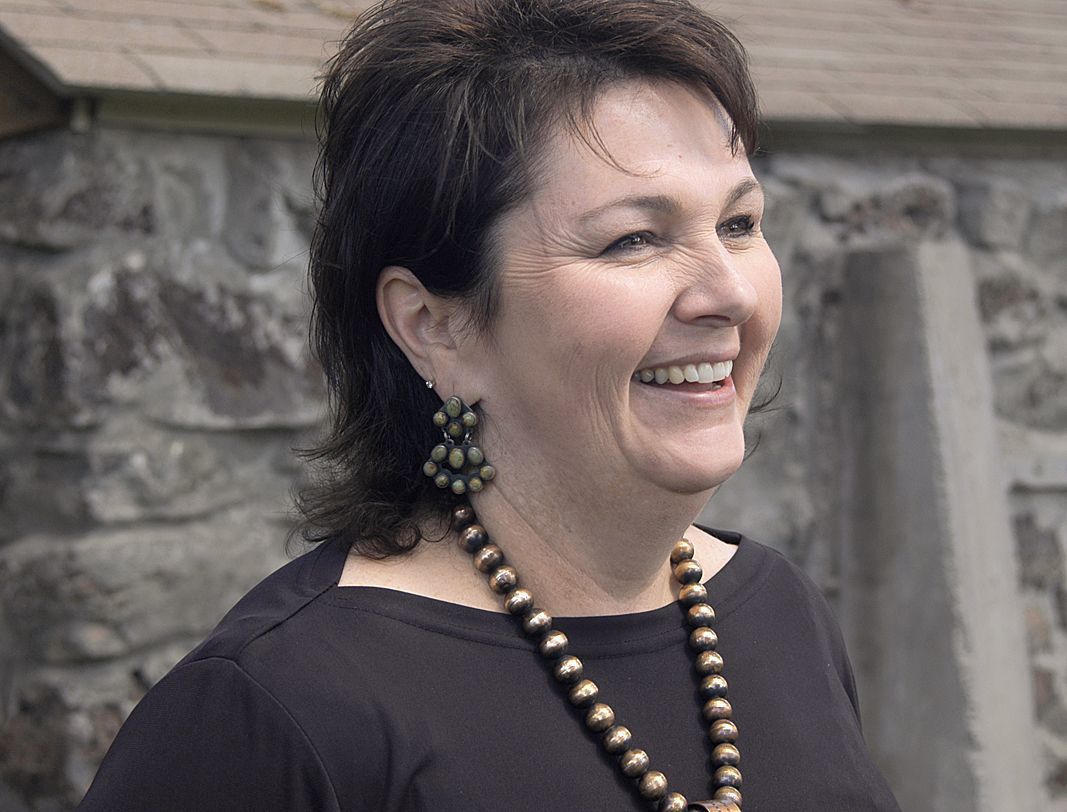 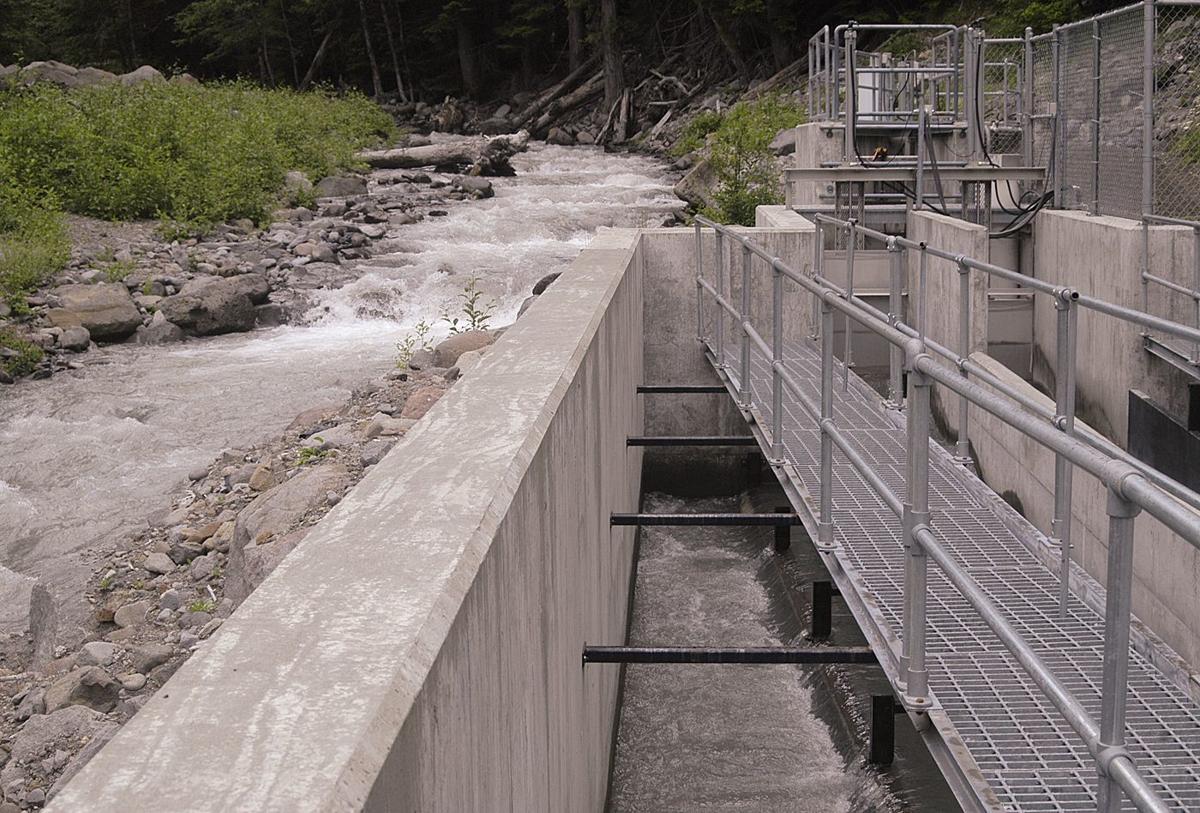 A horizontal screen placed at an irrigation diversion on Coe Creek protects anadromous fish and keeps sediment out of farmers' pipes and pumps. 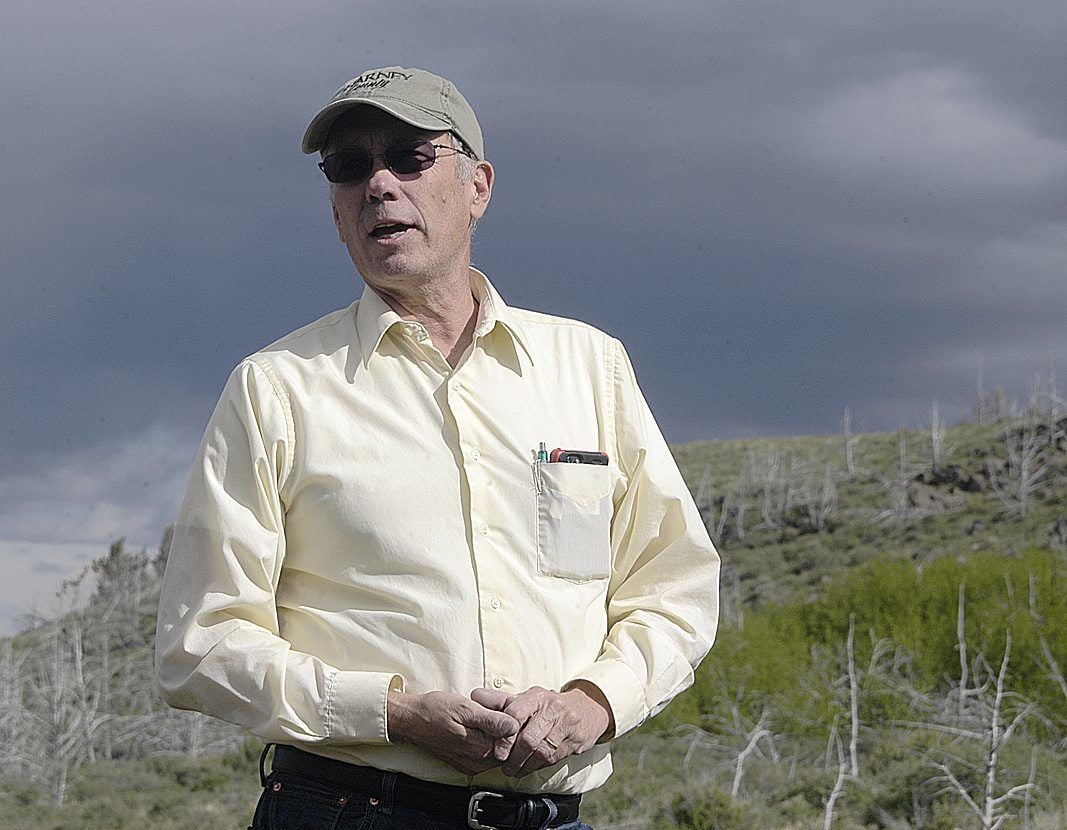 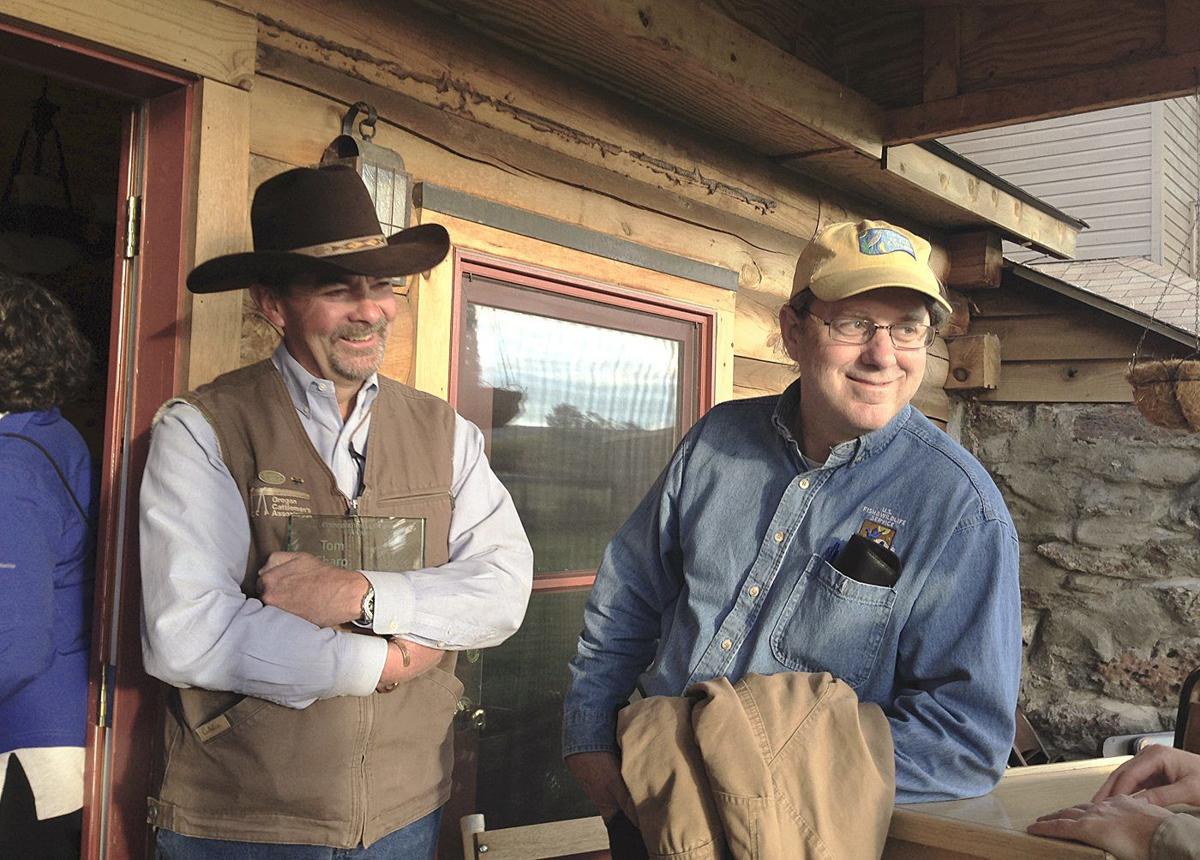 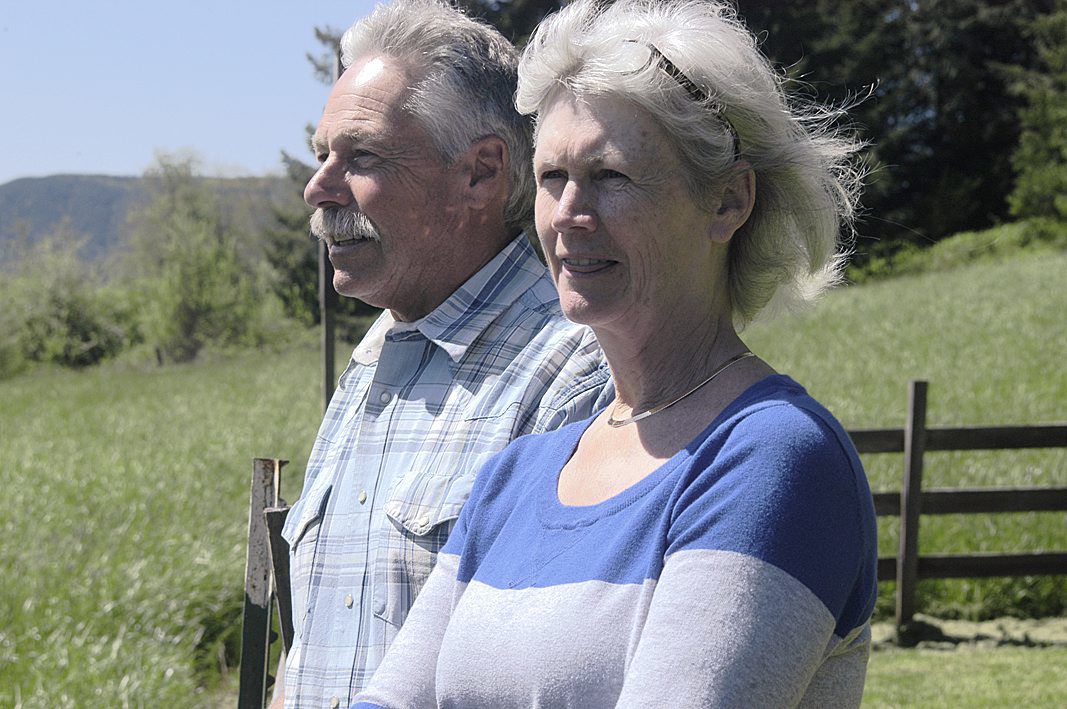 Eric Mortenson/Capital Press Marty Suter-Goold, manager of the Harney County Soil and Water Conservation District, talks with ranchers and federal agency officials at the ceremony to sign an agreement aimed at protecting the habitat of the greater sage grouse on a large swath of private land in Eastern Oregon. She said trust between ranchers and federal officials was key to a sage grouse habitat agreement.

A horizontal screen placed at an irrigation diversion on Coe Creek protects anadromous fish and keeps sediment out of farmers' pipes and pumps.

STEENS MOUNTAIN — This is cattle country, a dry land of ranches, sagebrush, juniper and a rare species – the greater sage grouse, in this case – struggling to hang on.

Here on the north slope of the Steens, two dozen ranchers, federal wildlife biologists, the Harney County judge and other local and state officials are gathered around a small folding table to sign remarkable documents.

With a pen stroke, ranchers represented by the local Soil and Water Conservation District agree to manage their private rangeland in a way that will conserve habitat for the sage grouse, which U.S. Fish and Wildlife Service officials are considering for protection under the Endangered Species Act. In return, the ranchers gain 30 years of protection from additional regulation and restriction, even if the sage grouse is added to the endangered species list in 2015, as many expect.

Marty Suter-Goold, manager of the Harney County SWCD, stands in front of the group and calls the signing a “monumental moment for the West.” Thirty-nine landowners, representing a quarter-million acres in the county, had already indicated they were ready to sign on. A half dozen other counties had expressed interest in duplicating the agreements.

“We must remember what brought us to this mountain,” Suter-Goold says. “Relationships and trust.”

The Harney County agreement is an example of an emerging answer to the long-running questions about endangered species, natural resources and human activity in the forests and ranges of the West. While the use and management of federal land is paralyzed by lawsuits, private landowners are striking their own deals with regulatory agencies.

Oregon and Washington timber companies hold 60-year “safe harbor” agreements with the U.S. Fish and Wildlife Service that allow them to manage their lands as usual even if northern spotted owls take up residence.

In Oregon’s Yamhill County, farmers and foresters have the option of gaining 50 years regulatory protection by signing on to a habitat conservation plan for endangered Fender’s blue butterflies. The plan covers 7,831 acres of private land, with the local Soil and Water Conservation District serving as the go-between for landowners and the feds.

The agreements on private land are significant because federal regulatory authority applies just as it does on public land. Regulations and restrictions related to endangered species, habitat and water quality and quantity have a direct impact on farming, grazing, mining, logging, fishing and recreation.

On public land, those issues seem intractable, and the federal government owns nearly half the land in 11 Western states. Just two agencies, the Forest Service and Bureau of Land Management, control 60 percent of the land in Idaho, 46 percent in Oregon, 35 percent in California and 23 percent in Washington.

But management policy disputes of the past 30 years, punctuated by protests and lawsuits, have greatly reduced economic use of those lands. In Oregon alone, the federal government owns 60 percent of the forestland but accounts for only 12 percent of the annual timber harvest.

That’s the sort of statistic that’s led legislators and county commissioners in six states – Nevada, Utah, Arizona, Idaho, Wyoming and Montana – to demand the U.S. turn federal land over to the states. The American Lands Council, based in Utah, says state economies and local governments and schools are hurting because federal agencies limit logging, grazing and mining to avoid potential harm to threatened or endangered species.

“The agencies have abandoned the multiple-use mandate in favor of preservationist policy,” said Doug Heaton, a county commissioner in Southern Utah who is on the council’s board of directors. “That’s the source of the irritation you’re seeing with ranchers and miners.

“The Endangered Species Act has long ceased to be about the animals and became a tool increasingly to stop other uses,” Heaton said.

Landowners and rural communities can’t afford for private land to be shut down in similar fashion, said Harney County Judge Steve Grasty. In his county, with the timber industry reduced to a shadow of what it was, cattle ranching is the region’s economic engine.

“If we lose this chink, this little bit of economy we have left,” Grasty said, “the schools, churches and communities are all going to go away.”

That reality led to some unexpected collaboration on the county’s sage grouse plan, including working with federal officials who “looked like the enemy,” Grasty said.

That would include Paul Henson, Oregon supervisor of the U.S. Fish and Wildlife Service, who cheerfully acknowledges he had to overcome ranchers’ first impression of him: He’s a native New Yorker with a long ponytail and round-frame glasses. But Suter-Goold of the Soil and Water Conservation District said Henson won over locals with his open manner and “really brought a breath of fresh air to our process.”

It also helped that one of the USFWS biologists, Angela Sitz, is from the area and knew many of the ranchers involved in the sage grouse discussions. “She bought us a lot at that county courthouse,” said USFWS spokeswoman Elizabeth Materna.

Another key – repeated time and again when private landowners collaborate with government agency – is the presence of a local, trusted intermediary such as a soil and water conservation district. In the Harney County case, the district showed federal agencies it had the technical expertise to develop ranch habitat plans while assuring landowners would “feel comfortable letting us on their land,” Suter-Goold said.

Collaboration doesn’t happen on its own, said James Skillen, a professor at Calvin College in Michigan who has written a history of the BLM titled, “The Nation’s Largest Landlord.”

In the case of sage grouse and other environmental issues, the deciding factors for landowners include the presence of a “regulatory hammer” coupled with “the conviction that some bureaucrat in Washington or some biologist in Portland is going to be the one to micromanage the issue” if locals can’t figure it out, Skillen said.

“When everyone stands to lose, then they will collaborate,” he said.

Government agencies, in the meantime, can help ease such agreements into place by setting a broad goal – such as habitat conservation – and letting people directly involved figure out how to achieve it, he said.

A variation of that approach worked for the Port Blakely Companies, based in Tumwater, Wash. The company has about 150,000 acres of timber in Oregon and Washington and 75,000 acres in New Zealand, and manages its land with commercial thinning and on a long harvest rotation, 60 years, about 20 years longer than the industry standard.

In 2009, the company was faced with the realization that 45,000 acres it had purchased five years earlier might become spotted owl habitat because its management would produce the bigger, older trees the owls favor. The surrounding federal forests had up to nine owl nesting sites. Port Blakely had the option of cutting its trees early to avoid them becoming attractive to owls – a practice sometimes called “panic cutting” or “pre-emptive habitat destruction.”

Instead, the company forged a “safe harbor” agreement, working with the USFWS, the state Department of Fish and Wildlife and the Washington Department of Natural Resources. Tribes and key environmental groups were kept informed during the two-year process.

Under the agreement, Port Blakely thins the timber to encourage bigger tree growth, shelters owl prey with brushy areas and downed logs, and leaves or even creates snags – dead, standing trees that will provide food and habitat for bugs, birds, small mammals and perhaps owls. In return, Port Blakely will be protected from additional restrictions for 60 years, even if spotted owls are eventually classified as endangered.

“I would be open to jump into another one in a heartbeat,” said Court Stanley, Port Blakely’s president of forestry. “Regulatory certainty is really important. The tree we’re planting today, we know we can harvest in 50 or 60 years.

“We never went into it thinking it would fail,” Stanley said. “We were committed to do it and knew we had the right partners in the agencies to get it done.”

SDS Lumber Co. in Bingen, Wash., signed a similar 60-year agreement involving 85,000 acres of timberland it owns in Washington and Oregon. Company President Jason Spadaro said the agreement gives it the flexibility it needs to manage timber and supply logs to its mill.

“Trust is a critical piece to it,” Spadaro said. “We’re contracting with the federal government for 60 years, and both parties need to trust and verify that we live up it.”

“We could be in the middle of a rising tide of this,” Skillen said, “but it’s also fairly fragile.”