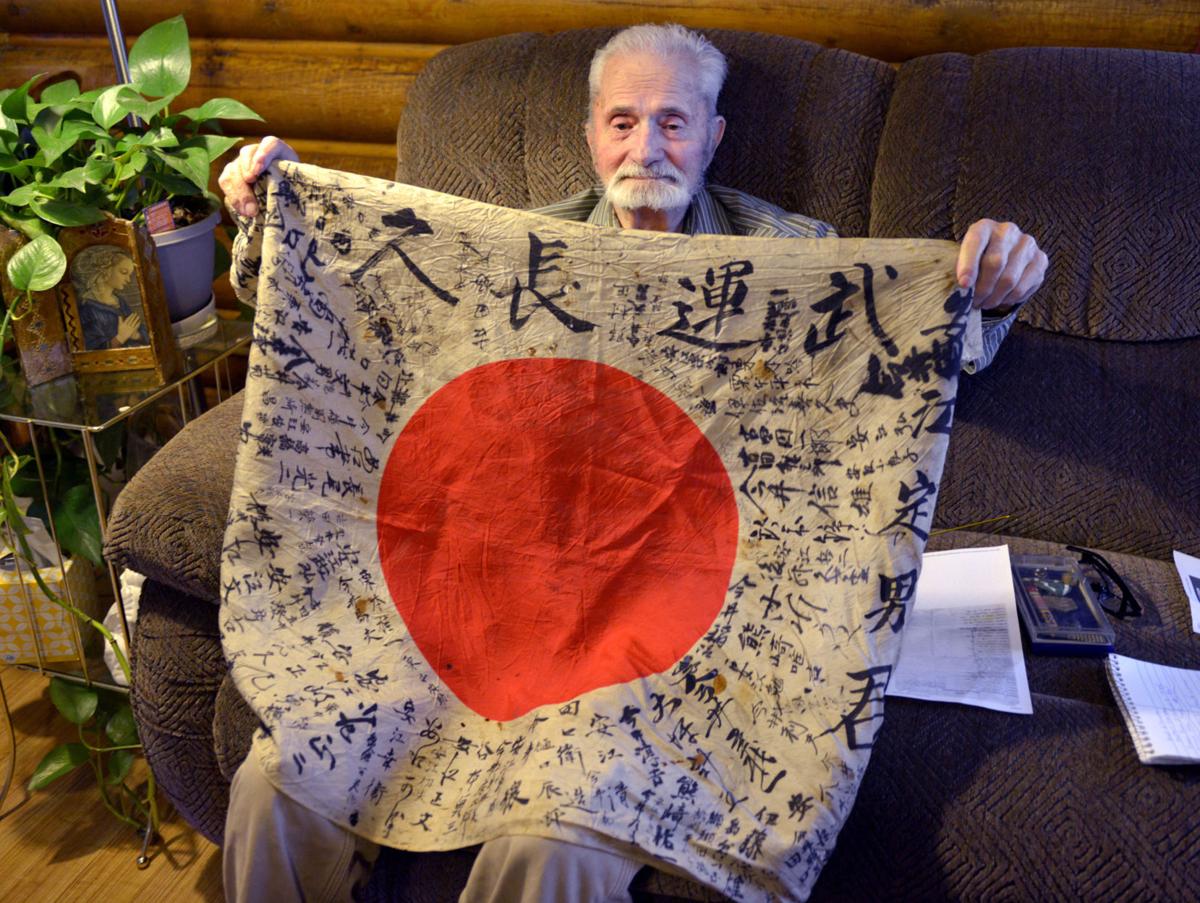 Marvin Strombo of Dixon, Mont., holds a flag that he took from a Japanese officer who died during the Battle of Saipan in 1944. He hopes it will be returned to the family of the soldier. A University of Montana assistant professor identified the soldier as Yasue Sadao. 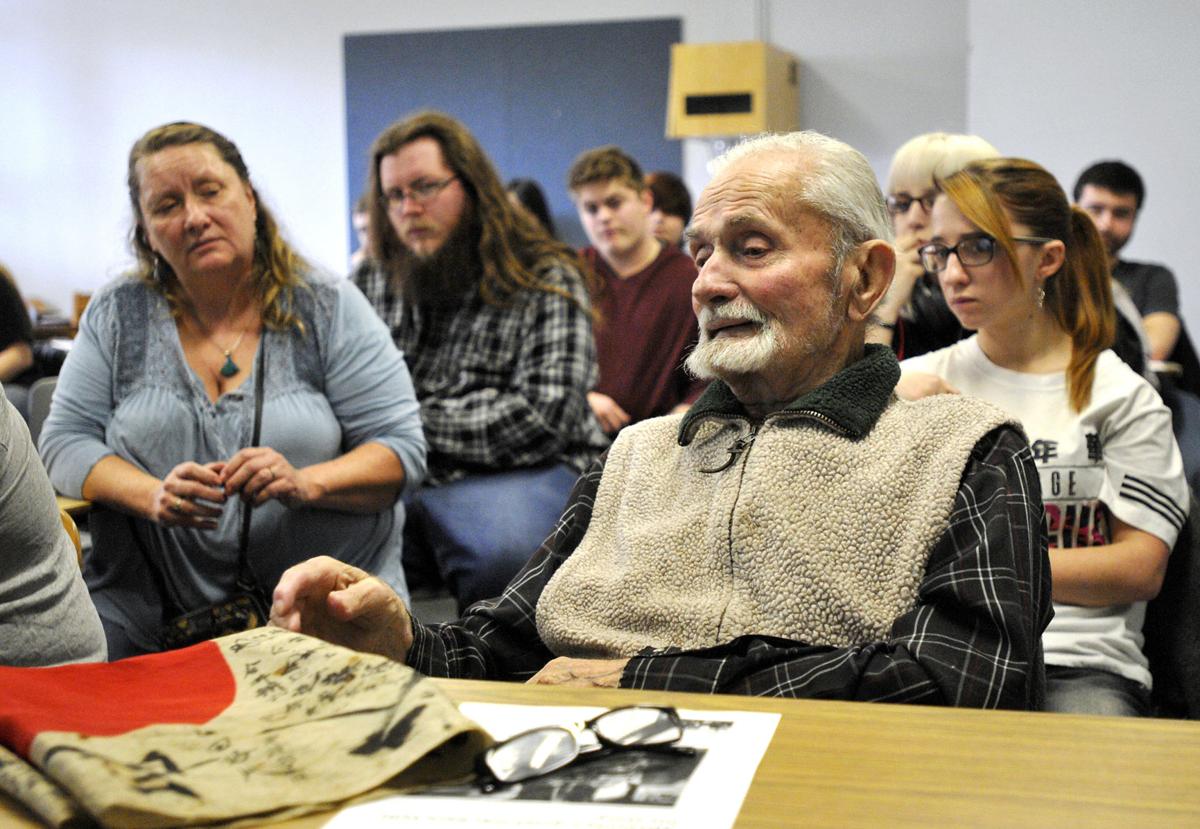 World War II veteran Marvin Strombo, right, talks to a Japanese Culture and Civilization class at the University of Montana in Missoula, Mont., about his experiences as a young Marine fighting in the Pacific during World War II.

Marvin Strombo of Dixon, Mont., holds a flag that he took from a Japanese officer who died during the Battle of Saipan in 1944. He hopes it will be returned to the family of the soldier. A University of Montana assistant professor identified the soldier as Yasue Sadao.

World War II veteran Marvin Strombo, right, talks to a Japanese Culture and Civilization class at the University of Montana in Missoula, Mont., about his experiences as a young Marine fighting in the Pacific during World War II.

MISSOULA, Mont. — With a little luck, Marvin Strombo’s good luck flag is on the first leg of its journey home to Japan.

It’s been in Strombo’s possession for more than 70 years, since the day the Marine private from Dixon claimed the distinctive flag and a saber off a Japanese officer killed in the Battle of Saipan in 1944.

The saber was stolen in the 1970s from Strombo’s home on Fairview Avenue, where Marvin still lives at age 93.

One of his biggest fans, Joe Tachovsky of Wisconsin, came through town on Tuesday to take Strombo to lunch and pick up the flag. On Thursday, Tachovsky delivered it to representatives of the Obon Society at the Columbia River Maritime Museum in Astoria.

Rex and Keiko Ziak founded the Obon Society in 2009 to help repatriate such war keepsakes with relatives in Japan.

“I hope the family gets it,” Strombo told the Missoulian. “I think it would be some comfort to them.”

The hinomaru yosegaki flags were traditionally signed with well-wising messages by family and friends and presented to a Japanese man before he went to war.

University of Montana assistant professor Rob Tuck identified the probable bearer of Strombo’s flag as Yasue Sadao when Strombo visited Tuck’s class in November. As Strombo sees it, that information and the fact that Yasue carried a saber and was therefore an officer should help locate descendants.

Tachovsky, an author and restaurateur based in Minneapolis, is the son of Lt. Frank Tachovsky, the commander of Strombo’s scout-sniper platoon in the 6th U.S. Marine Regiment that operated behind enemy lines on Saipan.

He’s seeking an agent and publisher for his book “40 Thieves: Saipan,” which he researched, wrote and reworked after his father’s death.

Strombo is the oldest of three surviving “thieves” left from his father’s platoon, so nicknamed because they were masters of covert operations and because, as Strombo explained, “every time we needed a bottle of something we somehow got it.”

Roscoe Mullins of Culloden, West Virginia, and Bob Smotts of Dahlonega, Georgia, are the others. Tachovsky has befriended all three and tapped their memories for his book. He’s extremely fond of Strombo, and made this stop as part of a cross-country road trip that’ll take him down the West Coast and to Las Vegas, visiting grave sites and families of the men from his father’s platoon.

He too will be gratified if the flag can be returned to its rightful family.

“Anything I can do for Marvin,” Tachovsky said.

The Ziaks and the Obon Society got a boost last Memorial Day when CBS News highlighted their efforts in a feature called “The Flags of Their Fathers.” The program focused on a successful repatriation of a hinamaru initiated by Terry Stockdale, son of the late Glenn Stockdale of Billings.

It generated an overwhelming number of requests that the Ziaks and their network of researchers and legal assistants on both sides of the Pacific are scrambling to fulfill.

Their most recent success was capped last weekend in Beaver Falls, Pennsylvania, when Cynthia Kester, granddaughter of a U.S. Marine in World War II, presented a good-luck flag to the grandnephew of a Japanese soldier killed in 1945.

“We were enemies then. We are friends now,” Kester, 60, told Eisuke Oniike, 58, who traveled from his home in Japan to receive the flag.

The exchanges are good for the souls of both giver and receivers.

“Our first thought was it’s purely for the benefit of Japanese families, but we overlooked the fact that this is so enormously important for the Americans,” Rex Ziak said.

With the help of his daughter, Sandy Williamson, Strombo composed a short letter that will accompany his flag to Japan if Yasue Sadao’s family is found.

In it, Strombo introduces himself and says he was born, raised and continues to live in Montana.

“I have wanted to return this flag for a very long time, but we did not know how to do it,” Strombo’s letter says. “I hope the return of this flag brings your family some comfort.”

He writes that he’s always had respect for the Japanese soldiers because they fought so hard.

“We were all just trying to survive and fight for what we believed in,” Strombo says.

“Your loved one was already passed when I found him on the outskirts of Garapan, Saipan. After I brought the flag home, I felt bad.

“I have always believed that it did not belong to me, it belonged to you. I pray this flag finds its way home and, if you are reading this, it has.”