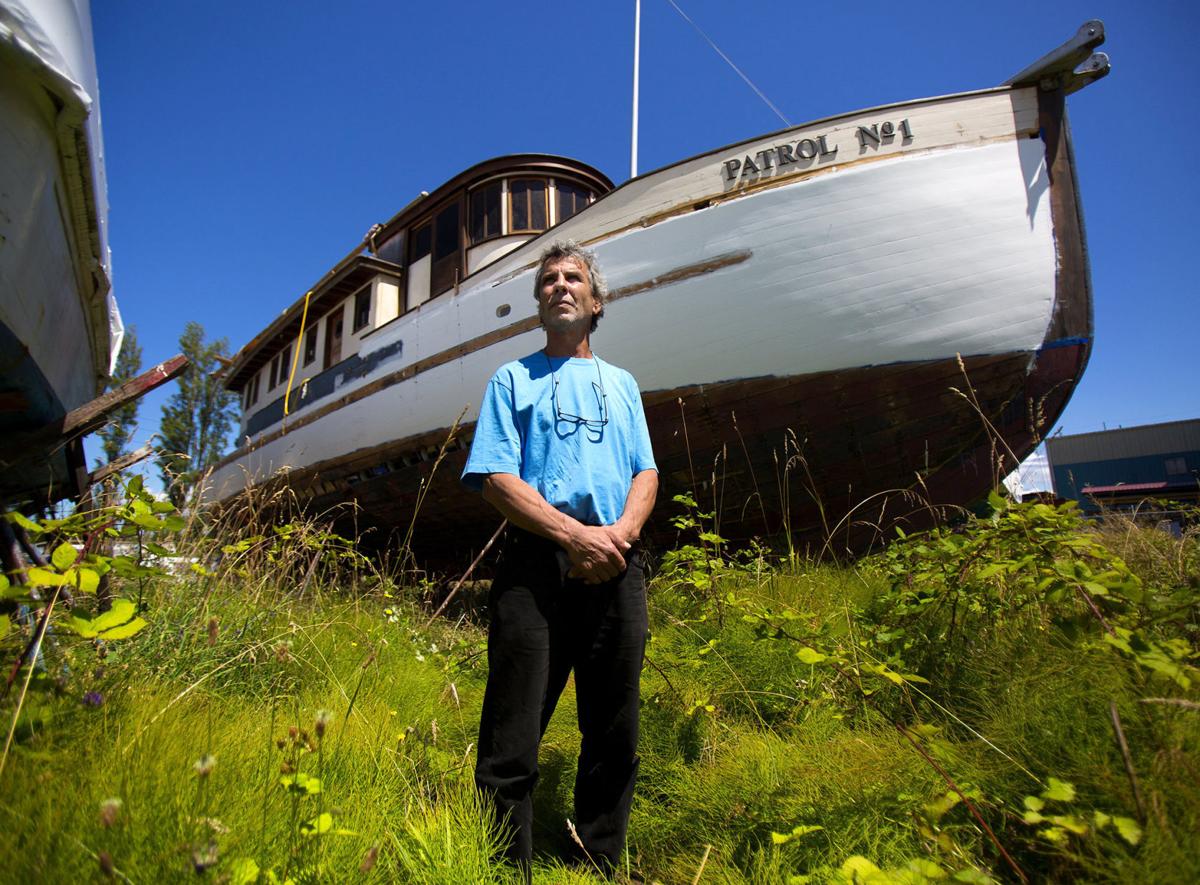 Marc Landry, who purchased the Seattle Harbor Patrol Boat No. 1 in June of 2008, spent over $185,000 and between 7,500-9,000 man hours restoring the wooden ship, which now sits at a shipyard at the Port of Port Townsend. The Port of Port Townsend deemed the boat derelict and will either sell it or demolish it. Landry estimates he only needs one more month of work to make the boat float. 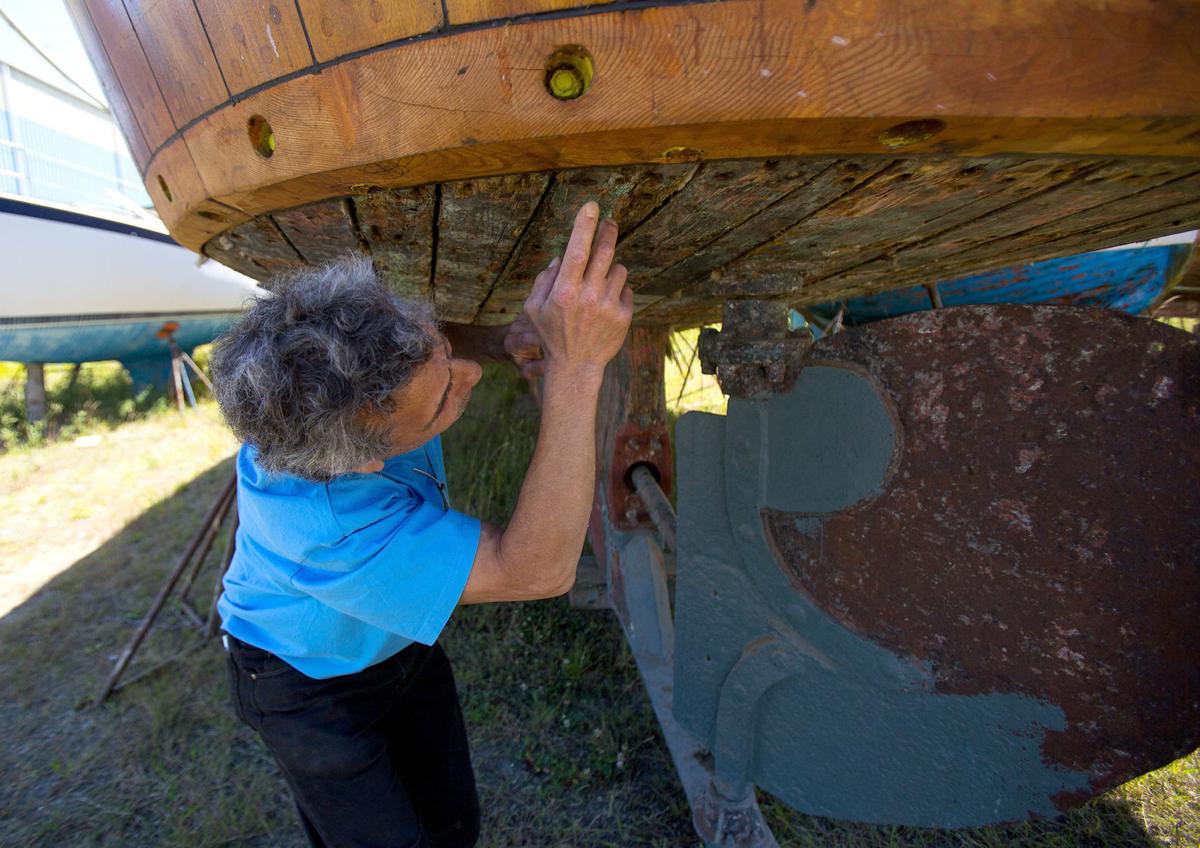 Marc Landry points to the area that he needs to caulk on the Seattle Harbor Patrol Boat No. 1, which was first constructed in 1914, at a shipyard at the Port of Port Townsend. 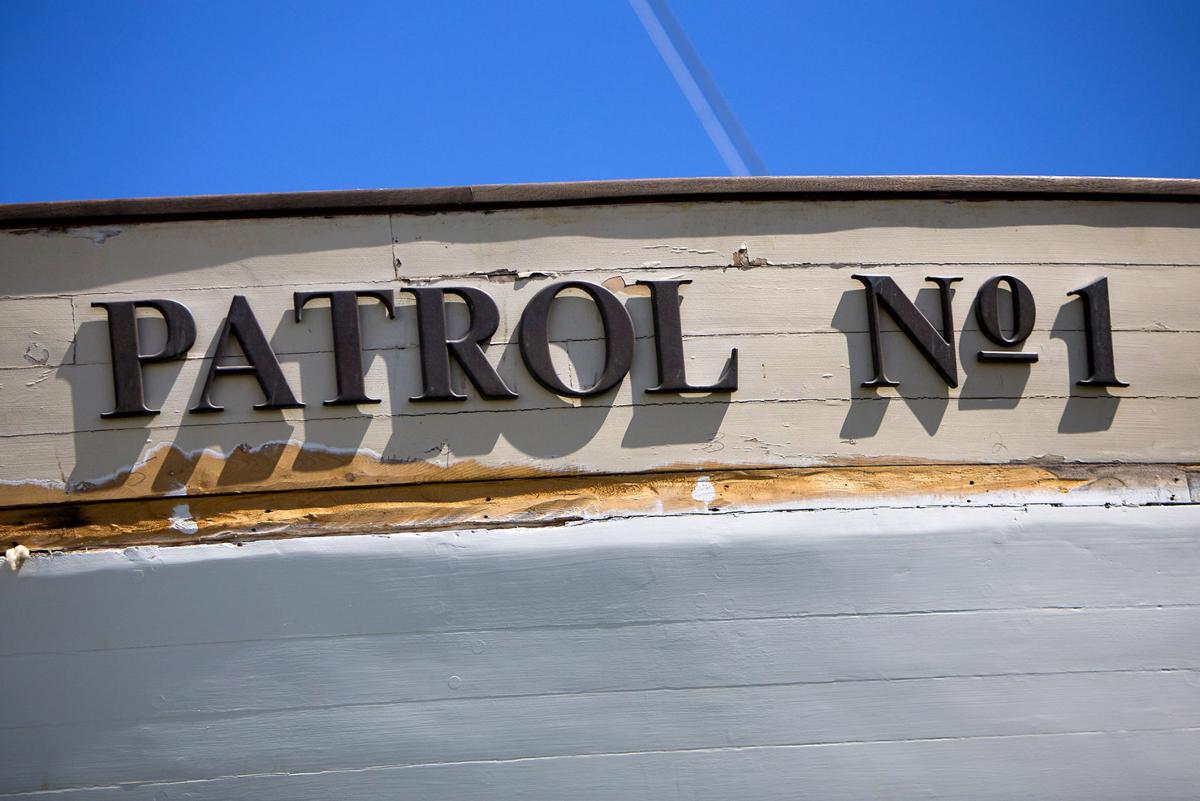 The original boat name plate on the Seattle Harbor Patrol Boat No. 1 that was build in 1914, which now sits at a shipyard at the Port of Port Townsend.

Marc Landry, who purchased the Seattle Harbor Patrol Boat No. 1 in June of 2008, spent over $185,000 and between 7,500-9,000 man hours restoring the wooden ship, which now sits at a shipyard at the Port of Port Townsend. The Port of Port Townsend deemed the boat derelict and will either sell it or demolish it. Landry estimates he only needs one more month of work to make the boat float.

Marc Landry points to the area that he needs to caulk on the Seattle Harbor Patrol Boat No. 1, which was first constructed in 1914, at a shipyard at the Port of Port Townsend.

The original boat name plate on the Seattle Harbor Patrol Boat No. 1 that was build in 1914, which now sits at a shipyard at the Port of Port Townsend.

PORT TOWNSEND, Wash. — There is something about old, historic wooden boats that, for some, turns them almost into living beings.

Says Mike Luis, former executive director at the Center for Wooden Boats, “They stir your soul. Boats are inherently emotional. They are beautiful things. They have interesting stories, they did interesting things. They’re not a neutral object.”

This is the story of Patrol No. 1, a little-known but significant Seattle tugboat that a century ago guarded and watched our waters for more than four decades.

It’s not an overstatement to say Patrol No. 1 ended up taking over the life of its last owner.

Marc Landry, 58, has used up his savings trying to restore it over the past eight years. He’s now homeless, staying with various friends in town, going to the food bank.

Since the boat left service, he’s been among three owners of the boat who have spent some $300,000 in total restoring it. But only Landry has had this much emotional investment. The other two knew when enough was enough.

Now, Patrol No. 1 is headed for demolition; the Port of Port Townsend took possession of the boat after Landry didn’t move it when given an eviction notice in January. It’s been at the port for five years.

Port officials say they have had numerous problems with Landry, from late rent payments, to living aboard the boat in a “cocoon” of boards and plastic without proper permission.

People with the kind of passion shown by Landry don’t do very well with bureaucracies. They don’t — or forget to — conform to the rules. Their work areas are messy and cluttered.

“It’s very unfortunate. I don’t believe any parties wished it would come to this moment,” says Sam Gibboney, executive director of the Port.

Says Landry, “I have a beautiful boat that deserves a rebirth.”

About his arrival in Port Townsend in 2011 from the boat’s previous location on Vancouver Island, he says: “I had heard this was the Wooden Boat Capital of the West Coast. I came here with dark brown hair. Now it’s completely white.”

Patrol No. 1 sits unfinished behind a locked gate at the Port’s longterm storage yard. Landry is not permitted to board it.

Since January, a massive amount of court documents have accumulated in the battle between the Port and Landry.

He has filed a $10 million defamation and “emotional distress” case in Jefferson County Superior Court against the Port and Jim Pivarnik, its then-deputy director. Landry asked the court to vacate the eviction.

The proceedings dragged on with Landry filing paperwork “two, three and four times,” said Seth Goodstein, attorney for the Port, asking the court “to rule on the same issues he has already unsuccessfully brought .”

The court has awarded the Port $5,475 in sanctions against Landry.

The Port filed a motion asking that Landry be declared “a vexatious litigant” and barred from further filings, but a judge did not agree. Landry responded to the request by refiling his suit.

The Port says Landry was late on his rent 46 times. Landry says that on average he paid by the 20th due date each month, and that, like all other tenants, he had up to 90 days to pay.

“They’re making me the exception,” he says.

The Port can evict anyone from its 200-boat shipyard without cause with 20 days’ notice. Officials say they seldom do that.

The Port says it “is also frankly concerned that Mr. Landry fails to grasp the hole into which he continues to dig himself.”

It says his repetitive litigation “with expectation of differing results indicate irrational behavior.”

He does have his supporters in this town of 9,200.

Says James Fritz, 76, a retired general contractor: “This is supposed to be a Victorian seaport. You need a few old boats being worked on to add character to the port.”

Sure, says Fritz about Landry, “he’s a little bit messy. It’s confined to a small area.”

Russ Guilford, a retired bus driver, met Landry while walking around the port taking pictures. Guilford and his wife, Lorie, recently let Landry camp out in their backyard.

“He’s a quirky guy with a different personality than most people,” says Guilford. “He wasn’t a troublemaker. It’s beyond me why this is happening to him. It’s beyond sad.”’

Patrol No. 1’s working days were such that she should have been the star of her own TV show: “Stories from the Harbor Patrol.”

She was the first vessel built specifically to protect our waterfront terminals, including “pirates” that “roamed the bay all night,” said a May 10, 1918, Seattle Daily Times story about its launching.

The city was so proud of the boat that it also was to be used by the mayor and other officials to meet incoming ships of importance “in a way that will reflect credit to the port.” In christening her, “genuine Champagne” was used.

She worked first for the city’s old Harbor Department and then for the Seattle Police Department until her retirement in 1961.

A Seattle Daily Times story from May 31, 1920, the year Prohibition went into effect, told of Patrol No. 1 using “several rifle shots” to bring to a halt a speeding boat on Lake Washington just off Laurelhurst that was suspected of running whiskey. Three men on the boat were seen dumping overboard three heavy gunnysacks. The captain said he believed he heard “a noise like clinking glassware” in the sacks.

Three years later, Patrol No. 1’s crew used hooks to fish for 40 cases of whiskey dumped into the water after a boat chase near Alki.

The archives tell of the boat saving the life of the harbor master in 1929 when he had to jump into Elliott Bay during a devastating dock fire in what now is Terminal 46.

Or when the boat did such rescues as that of three teen boys who in 1931 were drifting “aimlessly” for four hours in Elliott Bay in “a rickety raft” with “paddles fashioned out of boxwood.”

If you want to preserve historic boats, better open up your wallet.

The legendary ferry Kalakala (made of iron, steel and copper) was demolished in 2015. One guess for restoration costs was $15 million.

The schooner Wawona, built from Douglas fir, was sawed into pieces in 2009. Restoration costs also were estimated at $15 million.

Says Mike Luis, “Eventually you end up replacing everything. They burn. They get shipworms. All kinds of things. There’s very little of the original left.”

Chris Pack, a builder from Stuart Island, owned the boat before Landry.

“I was hoping someone as crazy as me would purchase it and keep up the project,” says Pack.

Another owner of the boat was Steve Mayo of Bellingham, a retired tugboat captain who now is a professional marine artist.

He says the boat had been a well-built vessel.

The original contract specifications still exist in the city’s archives.

“Only the best grade of materials shall be used,” said the contract. “All lumber, unless otherwise specified, shall be fir free from sap, loose knots, shakes, pitch pockets and other imperfections.”

Still, Mayo says he spent $40,000 in repairs and added a long cabin on the main deck in the 25 years he owned it, not counting the hundreds of hours he and his dad worked on the boat.

Mayo did remove the name “Patrol No. 1” from the boat and replaced it with “Skua,” a seabird.

He says he got tired of people mistaking the tug for a fisheries patrol boat.

“It was a wonderful old boat,” says Mayo. “I have no regrets about the time I spent on it.”

He says he visited Landry and was impressed with his work. “He had done a good job.”

Landry is a Canadian who says his background includes working in data collection, concrete construction and as a geoduck diver. (Part of his money problems, he says, is that as a Canadian he can’t legally work here.)

Landry dreams about finishing work on the boat. He says he needs less than a month and he can get out on the water.

The Port has given Landry one last chance. Just sign a document that says:

Release any interest in Patrol No. 1. Stop filing lawsuits so potential buyers aren’t scared off.

The Port then would put the boat up for sale and see if anybody wants it.

Landry turned down the offer.

The countdown for Patrol No. 1 continues.