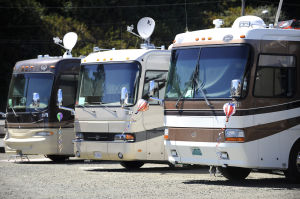 NORTH BEND -- The big, shiny, Monaco coaches will soon be pulling out of The Mill Casino-Hotel & RV Park and heading for points unknown after spending the last week learning new things and rekindling old friendships.

Monaco International RV Club, a chapter of the Family Motor Coach Association, has been around for 30 years. Each year the members can travel thousands of miles to take part in a handful of rallies around the country.

It is an expensive hobby. Some of the larger coaches themselves can start at a half million dollars. Then, factor in that thousands of miles of travel can cost about a buck a mile in fuel costs.

Club membership is open to anyone who owns any brand of motor home manufactured by Monaco Coach Corporation or Monaco RV. But, just who are those members?

"We're kind of a real big family," Jack Brewster said. The New York native has been serving as the rally master for this event.

He says there are currently about 2,000 members, stretching across the U.S. and Canada. They are about evenly split among full-timers and part-timers. Those referred to as full-timers don't own a brick-and-morter home, as they spend a lot of their time on the road.

"I do it because I love to travel the United States," Brewster said. "It's a beautiful country with a lot of wonderful, fantastic things to see. And it's something I can do with my wife and I can have my own bed, my own food in my refrigerator when I want to eat. And we can travel and stop anyplace that we want to. It's just a wonderful experience that we all enjoy."

Current club president David Piper agrees. He has a home in Oklahoma that he checks in on from time to time, but those times can be few and far between.

"If you drew a line across the bottom of the Baja, through Mexico, and another line from the Arctic Circle to the north end of Newfoundland, I've been in all that territory at least once. Including putting the motor home on a ferry and, 71/2 hours later, taking it off in Newfoundland. It's just fun and games."

The club treasurer, and past president, Jenkins is based out of Texas. He says the rally is as helpful as it is enjoyable.

"The company comes and brings new coaches," he said. "They bring technicians and parts, and they present some seminars to help people learn more about their coach."

Relationships are important, he said, but they are really just part of the draw.

"The relationship wouldn't make me drive from Texas to here. So, we also come here because I can talk to my neighbor, who has a coach similar to mine, and we can talk about the issues that are going on."

They all agreed that the club is composed of a variety of personality types, but there is generally one unifying trait. One that goes beyond just having the financial means.

"It costs a lot of money, first of all; it is not for the faint-hearted," Jenkins said. "It's a lifestyle."

A lifestyle that may not be as mobile as it once was, due to the struggling economy, but club members said they aren't letting that interfere with their fun.

For more information on this nonprofit organization, check out their website at www.monacointernationalrvclub.com.