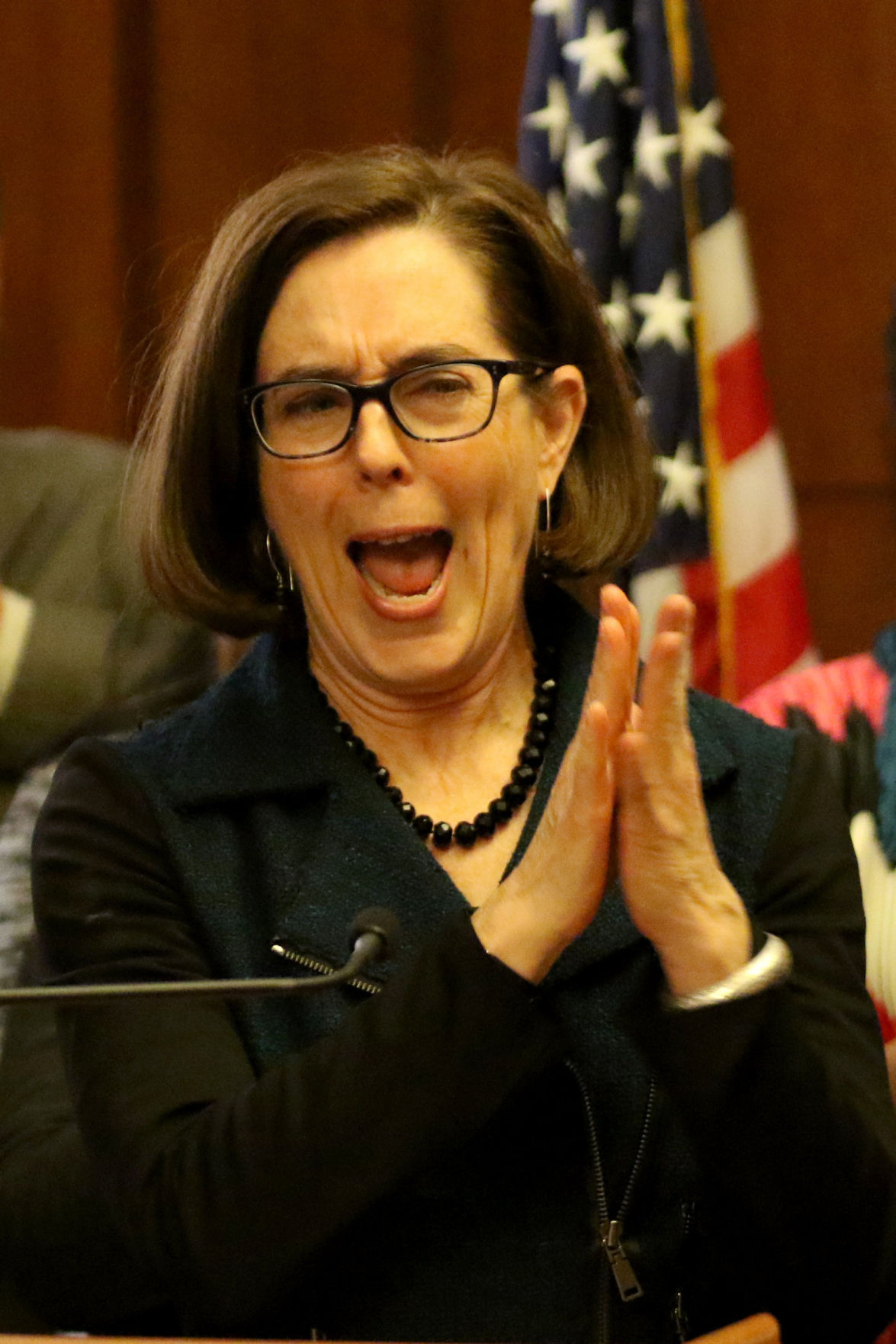 Gov. Kate Brown celebrates before signing Senate Bill 1532, increasing Oregon's minimum wage according to a tiered system, at the State Capitol in Salem on Wednesday. Portland's minimum will rise to $14.75 by 2022, suburban areas to $13.50 and rural areas to $12.50. The tiered approach is based on economic factors. 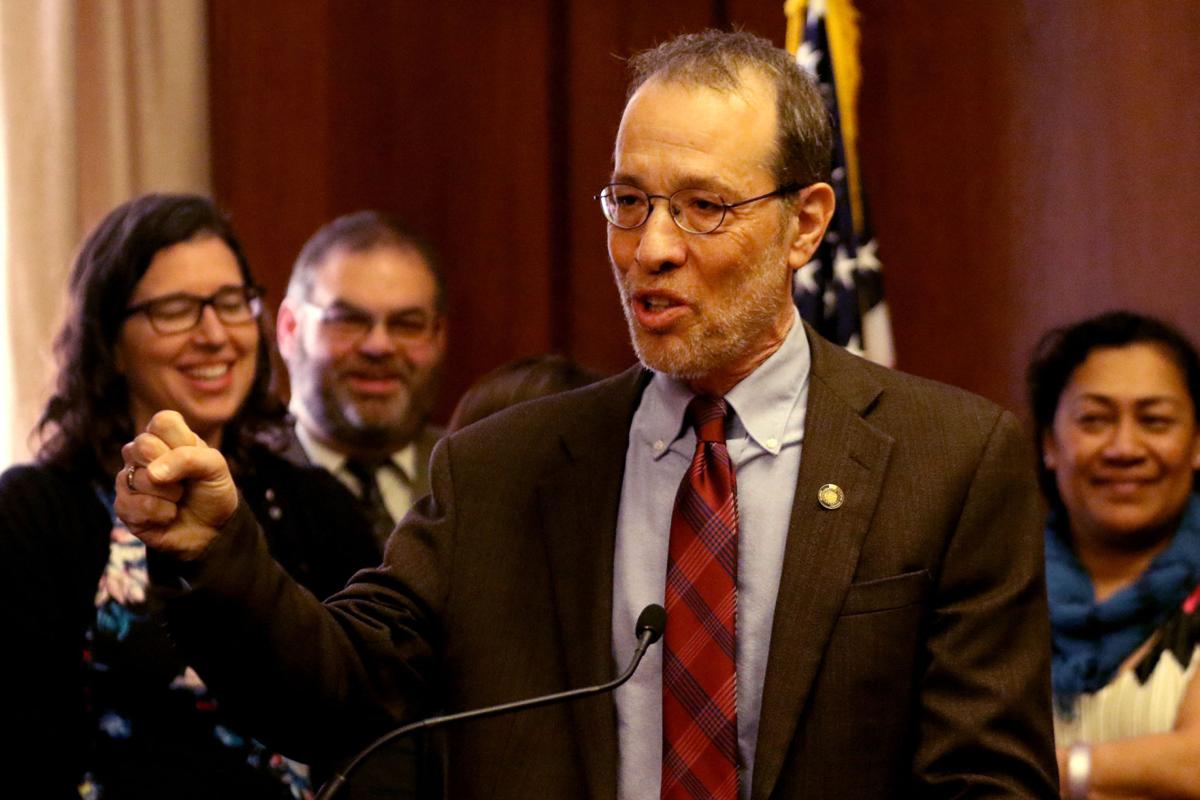 Gov. Kate Brown celebrates before signing Senate Bill 1532, increasing Oregon's minimum wage according to a tiered system, at the State Capitol in Salem on Wednesday. Portland's minimum will rise to $14.75 by 2022, suburban areas to $13.50 and rural areas to $12.50. The tiered approach is based on economic factors.

The plan, which establishes a higher minimum wage in the Portland area and a lower amount in areas with a struggling economy, is the first of its kind in the nation, said state Sen. Michael Dembrow, D-Portland.

“I am so delighted to be here today to celebrate the achievement of my top priority for the short session to raise Oregon’s minimum wage,” Brown said. “Over the past few weeks, I’ve done a lot of talking about how important it is for hardworking Oregonians to get a much needed raise in order to keep up with the rising cost of housing, rent, food and other necessities.”

Dembrow and Rep. Paul Holvey, D-Eugene, crafted the plan, contained in Senate Bill 1532, after a year’s worth of research, meetings with stakeholders, public hearings and negotiations.

The plan hikes wages over a period of six years. The amount differs in each of three regions and is set according to a county’s population, median income and cost of living. The minimum wage will reach $14.75 in the Portland area, $12.50 in rural and coastal counties with struggling economies and $13.50 in the rest of the state by 2022.

President Barack Obama commended the Oregon Legislature and Brown Wednesday for approving the plan and called on Congress to follow suit. He said more than half of states now have wages higher than the federal minimum.

“Since I first called on Congress to increase the federal minimum wage in 2013, 18 states and the District of Columbia have acted on their own,” Obama said in a statement. “These efforts will boost the paychecks of hardworking Americans and help support millions of workers trying to make ends meet.”

Brown said the plan would help the state avoid “a number of potentially problematic ballot measures.”

It is still unclear whether all of the initiative campaigns are dead.

The Raise the Wage coalition announced Monday that it has suspended signature gathering to place a measure on the ballot to raise wages to $13.50 statewide during a three-year period. That measure also would have lifted a ban on cities and counties setting higher wages. Chief sponsors said early in the campaign that the union-backed initiative was intended to spur the Legislature to action.

“While this proposal diverges from our initial plan for raising the wage, it is overwhelmingly a win for Oregon workers — in large part because it gives a raise to over 100,000 minimum-wage workers this July,” said Andrea Miller, executive director of Causa Oregon. “Most notably, this bill contains no carve-outs or exceptions for different classes of workers, like farmworkers or restaurant workers, or for people just starting out in their career.”

The $15 Now campaign is still an unknown.

“We are still in discussions with our partners of which there are many,” said chief petitioner Jamie Partridge of Portland. They are figuring out how to go forward. We are trying to determine our capacity to go to the ballot and wage a winning campaign.”

The plan approved by the Legislature is “too low, too slow and too little, too late,” Partridge said. “It’s not enough to bring people out of poverty.”

Anthony K. Smith, Oregon state director for the National Federation of Independent Business called on the governor to publicly oppose the $15 Now campaign.

“It’s bad enough that this unfortunate law will prompt small-business owners to halt hiring, start cutting back hours for workers, start eliminating overtime, or even make layoffs, but her silence on the ballot initiative only adds to the anxiety Oregon’s entrepreneurs are already experiencing,” Smith said in a statement.