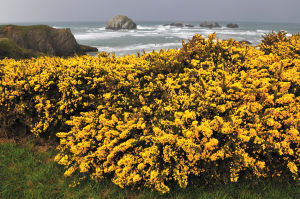 They're beautiful. They're exotic. And it's hard to say "no" to them.

Both Scotch broom and gorse are botanical invaders that have been the target of extensive eradication efforts, but they're so persistent that they've become a characteristic sight all over the South Coast.

Gorse was introduced by Lord George Bennett, an Irish peer who helped found the town of Bandon in the 1870s. Gorse reminded Bennett of his homeland, but it rapidly formed immense thickets up and down the coast. The highly flammable shrub was blamed for spreading the great fire that destroyed Bandon in 1936.

Scotch broom came to Oregon with early settlers as a garden ornamental and took off as a noxious weed after it was planted to stabilize soil on highway embankments.

Both plants are members of the pea family, with showy yellow flowers that turn into fuzzy pods. Gorse has stiff, thorny stems that form thickets impenetrable to humans or large animals. Scotch broom is poisonous to cattle and changes soil chemistry so that even if it is pulled up or killed with herbicides, other plants have a hard time recolonizing the area. Both plants destroy habitat that native plants and animals need.