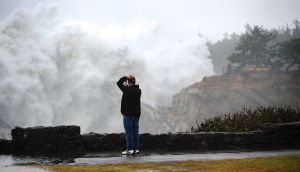 Why is the coast so windy in summer?

Marty Giles, a naturalist who runs Wavecrest Discoveries, often has to explain the phenomenon to guests of her tour business.

"Since winds around high pressure systems in the Northern Hemisphere rotate in a clockwise direction, our eastern edge of the Pacific gets the north-to-south part of the wind gyre -- cold summer winds," Giles explained.

When this warm, moist air encounters the colder air over the land, it drops its moisture as our abundant winter rain.

In addition to this large-scale air movement, on a sunny summer day, as warm air rises off the land, cool ocean air flows toward the land to take its place. The hotter the sun, the faster the ocean air rushes toward the land.