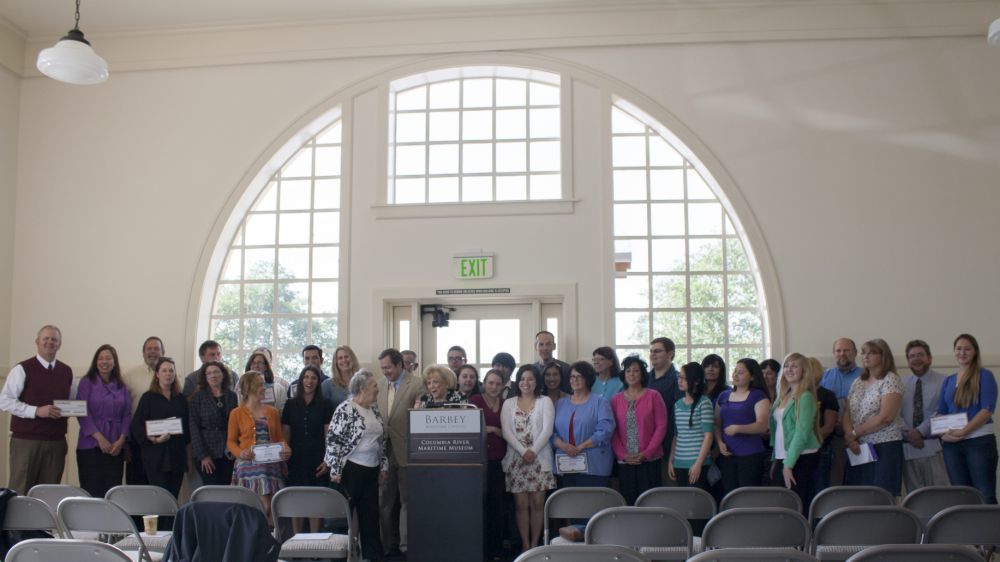 <p>Arlene and her son Jordan Schnitzer took the podium Friday to congratulate the adolescent grantwriters and recipients of grants through their family foundation's CommiCare philanthropy program. More than 10 local nonprofits, along with programs at Astoria and Warrenton high schools, collectively recieved more than $21,000.</p> 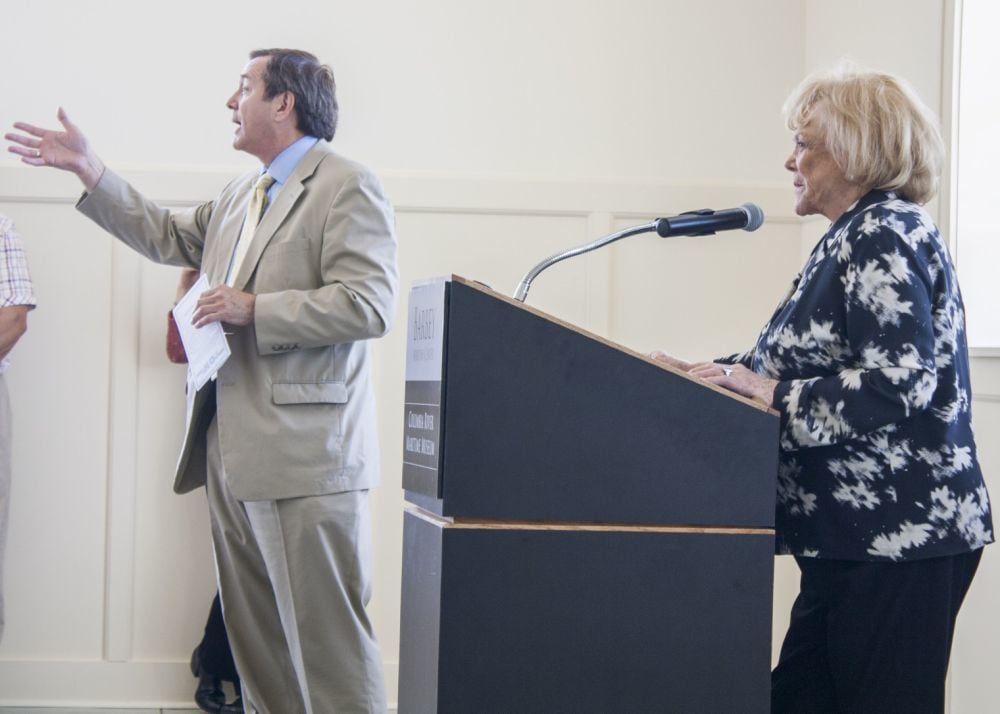 <p>Jordan and his mother Arlene Schnitzer represented the Harold and Arlene Schnitzer CARE Foundation. Through its CommuniCare program created 17 years ago, the foundation has matched more than $700,000 to high schoolers' philanthropy – at a tenfold ratio.</p>

<p>Arlene and her son Jordan Schnitzer took the podium Friday to congratulate the adolescent grantwriters and recipients of grants through their family foundation's CommiCare philanthropy program. More than 10 local nonprofits, along with programs at Astoria and Warrenton high schools, collectively recieved more than $21,000.</p>

<p>Jordan and his mother Arlene Schnitzer represented the Harold and Arlene Schnitzer CARE Foundation. Through its CommuniCare program created 17 years ago, the foundation has matched more than $700,000 to high schoolers' philanthropy – at a tenfold ratio.</p>

High school students held the purse strings as leaders of more than 10 local nonprofits waited for awards to be announced. The CommuniCare granting ceremony was held in the bright western wing of the Barbey Maritime Center Friday evening.

Warrenton and Astoria high school Key Clubs each granted more than $10,000 to local nonprofits and programs at their high schools. Their gifts were matched tenfold by the Harold and Arlene Schnitzer CARE Foundation.

Philanthropy doesnt have to be in huge amounts to make a big difference, said Arlene Schnitzer, in town with son Jordan and other foundation members for the CommuniCare ceremony and the opening of the Garden of Surging Waves. I hope you remember that for whatever you do, wherever life takes you, its the little things that count.

CommuniCare, in its 17th year, introduces young people to philanthropy by putting them in charge of a minifoundation. Students raise at least $1,000, which the Schnitzers match 10 times over.

Students control the money they raise. The foundation requires that at least $7,500 of its match goes to support Oregon nonprofits in areas of concern voted on by a schools student body. At least $2,500 or more supports programs at the school or in the district.

After raising their money, Key Club students interviewed the nonprofits, reviewed their proposals and decided whether they should receive grants.

Warrentons Key Club students, some of whom said there were not enough school dances throughout the year, killed two birds with one stone in the dead of winter, by organizing a winter ball.

We were all surprised when this winter ball actually managed to raise more than $1,000 by itself, in our small school district alone, said senior Benjamin Najera, who along with 10 to 20 other students, helped organize the dance at the Astoria Arts and Movement Center.

Warrentons students gave $7,750 to nonprofits, including:

 $2,460 for parenting classes at The Harbor, formerly the Womens Resource Center.

 $590 to support the North Coast chapter of the Depression and Bipolar Support Alliance, run by Patricia and Peter Fessler. The couple operates Penny Wise Thrift Store and Heaven Sent Boarding House in Warrenton to support their efforts in the alliance.

 $1,500 for The Healing Circle, which runs Victory Over Child Abuse (VOCA) Camps.

 $2,000 to support the Warrenton Hall of Fame Foundation, which provides Warrenton graduates with scholarships.

 $1,200 to the Lower Columbia Hispanic Council for a dental van.

The students also granted $2,750 to departments in WHS, including $1,090 for calculators and another $1,000 for Warrenton-Hammond Healthy Kids Inc.s weekend backpack food programs.

That will provide a years worth of weekends for about 80 children, said Pam Ackley, a co-director of Healthy Kids.

The more than 60 members of AHS Key Club took a more traditional fundraising route of car washes and a poinsettia sale, raising upward of $1,100. They gave more than $8,700 to nonprofits, including:

Barbara Hall, who oversees CommuniCare for the Schnitzer CARE Foundation, said she heard about a similar program by the El Pomar Foundation in Colorado Springs, Colo. She took the idea to the foundation.

My father felt that if we made the kids raise the money themselves, it would be more meaningful for them, said Jordan Schnitzer of his father Harold Schnitzer, who died in 2011.

CommuniCare took over for Community 101, a similar program by the Oregon Community Foundation that doesnt require students to raise funds, but is a fraction as lucrative. Knappa High School still partakes in Community 101.

CommuniCare continues to grow and now includes more than 10 high schools. Its matched more than $700,000 in student fundraising. The foundation is trying to add Seaside next year.

Members of the foundation see CommuniCare as an opportunity to educate high-schoolers on the importance of nonprofits and foundations. Hall said, There are career opportunities they might not know about.

Arlene Schnitzer, whos summered throughout her life on the North Coast, added her personal satisfaction at returning to a place she thinks of as home.