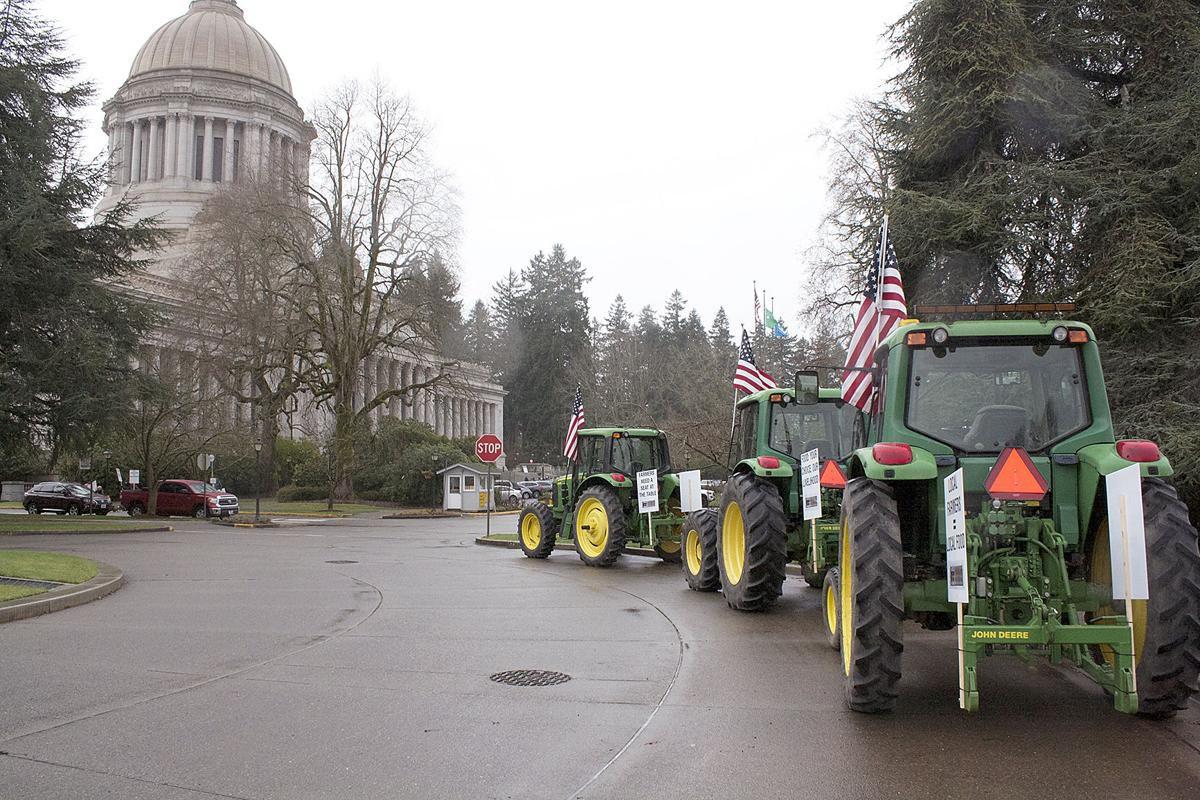 Farmers parked tractors at the Capitol in Olympia in January. 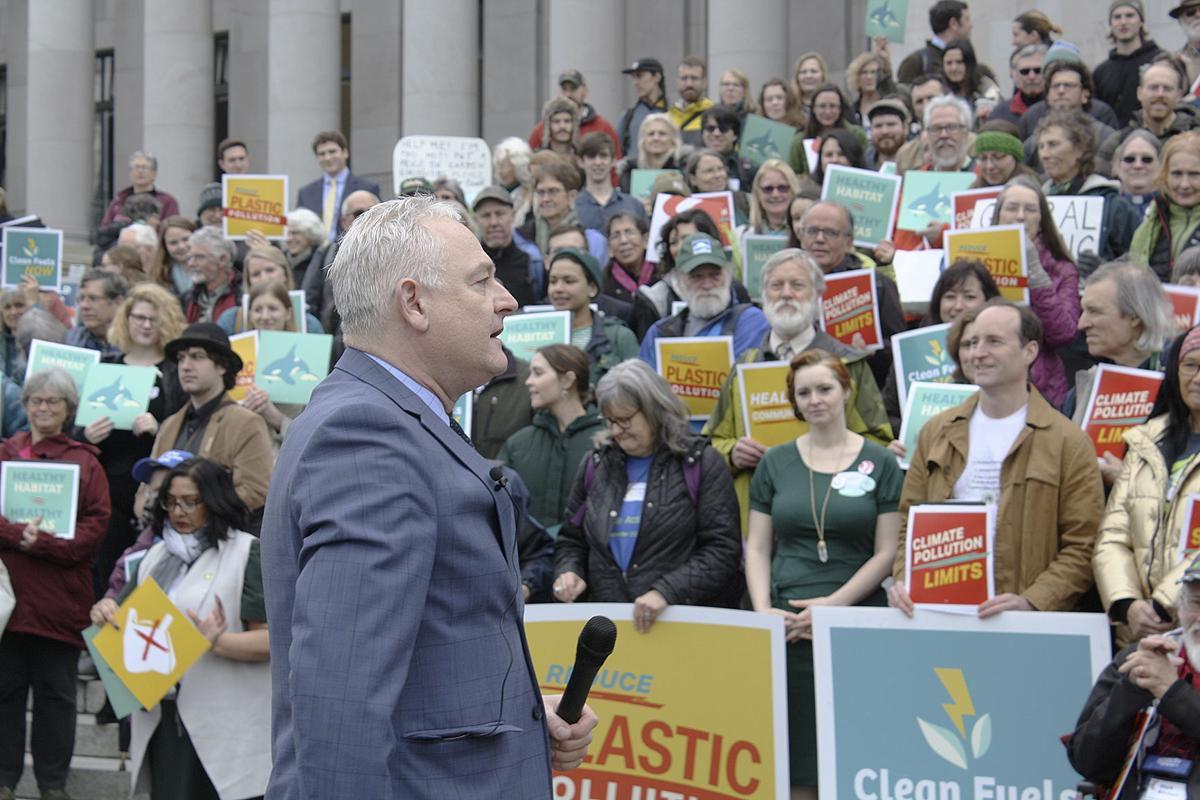 OLYMPIA, Wash. — The Washington Legislature has mandated renewable electricity, subsidized the purchase of electric vehicles and dictated how much energy air compressors, generators and other equipment can use.

That was last year.

This session, Gov. Jay Inslee is urging lawmakers to get even more ambitious. Democratic legislators are advancing, at the governor’s request, several major climate change bills.

One would require more renewable fuels in gasoline and diesel, a measure that farm groups say will drive up their production and transportation costs.

Another would apparently give the state Department of Ecology the power, if it chose to use it, to regulate anything that gives off measurable amounts of greenhouse gases, including tractors and other farm equipment.

And just last week, state Sen. Reuven Carlyle, D-Seattle, reintroduced a cap-and-trade bill, the controversial policy aimed at reducing the amount of greenhouse gas that goes into the atmosphere as a way to slow climate change.

The legislative session has five weeks to go.

In mid-January, when the session began, Inslee said the need for action on climate change was a foregone conclusion.

“There should be no more debate in the state of Washington about this subject, or in the Legislature,” the governor said.

Soon after the Legislature convened, the Washington Supreme Court issued a long-awaited ruling.

In a 5-4 decision, the court said Ecology couldn’t hold oil and natural gas companies responsible for the greenhouse gases emitted when their customers used their products.

The ruling gutted the Inslee administration’s Clean Air Rule. “This ruling will significantly affect our ability to reduce emissions,” the governor said the day the ruling came out.

If the rule had stood, natural gas distributors and petroleum producers and importers would have had to reduce their emissions or buy emission-reduction credits to make up for what their customers released by such activities as heating their homes.

The Washington Farm Bureau had joined other business groups in the lawsuit challenging the rule. The court’s majority agreed that Ecology had authority to regulate only actual emissions, not indirect emissions.

Although the ruling was a setback for his administration, Inslee quickly turned to the majority opinion’s comments on climate change.

Chief Justice Debra Stephens wrote that the case was not about the “undeniable crisis of climate change.” The problem, according to Stephens, was that Ecology exceeded the powers the Legislature had given it under the state Clean Air Act.

“The issue is not whether man-made climate change is real — it is,” she wrote. “Nor is the issue whether dramatic steps are needed to curb the worst effects of climate change — they are.”

Said Inslee: “I couldn’t say it with more fervor or accuracy.”

“We’ll take this as a clarion call for more action, and I’m happy to sally forward,” the governor said. “The venue now for that dramatic action is the Legislature this year.”

House and Senate Democrats have now introduced bills to give Ecology the authority to regulate indirect emissions.

Later, he restated the question: “Would indirect include beef cattle or dairy cattle?”

The lawyer arguing the case for Ecology, Laura Watson, who has since been promoted to the department’s director, said Ecology would be limited by its inability to precisely measure some things.

She cited greenhouse gases from livestock as an example — although Ecology does estimate emissions from enteric fermentation, the digestive processes of livestock.

Responding to a hypothetical question, Watson agreed that Ecology would be able to regulate greenhouse gases from wood stoves. “The point of regulation would be with the wood seller,” she said.

In the dissenting opinion, Justice Susan Owens wrote that Ecology’s ability to regulate only the emissions it can measure was a reasonable limiting principle.

Stephens’ majority opinion, however, issued a warning, and not about climate change. She wrote: “Left unchecked, Ecology’s expansive interpretation of its own authority would sweep many newly branded ‘indirect emitters’ into the regulatory web.”

Inslee is also urging lawmakers to follow California and Oregon and adopt a low-carbon fuel standard.

The policy seeks to reduce the carbon intensity of gasoline and diesel. Carbon intensity measures the greenhouse gases given off in producing, distributing and consuming a fuel.

Every source of power can be scored for its carbon intensity. Pure gasoline and diesel have high scores. Electricity, which primarily comes from dams, has a low score. Ethanol and biodiesel are in between.

The policy creates a market: suppliers of high-carbon fossil fuels must buy credits from suppliers of low-carbon renewable fuels.

However, the public eventually pays the cost, according to the office’s 2018 assessment of the program. “These higher costs have real adverse effects on households,” the report stated.

To highlight one potential effect on agriculture, three farmers testified to the Senate environment committee that gas mixed with ethanol increases equipment maintenance. They said they already pay a premium for pure gasoline.

“This is so important we pay about 40 cents per gallon extra to have nonethanol fuel on the farm,” said Mike Clayton, who grows apples and cherries near Lake Chelan.

Reed Schuler, another senior policy adviser on climate in the governor’s office, said a low-carbon fuel standard is a top priority for Inslee. Transportation is the No. 1 source of carbon emissions in Washington. “We do not have any other tools to do as much as cheaply to reduce carbon pollution from transportation,” Schuler said.

Under Inslee’s proposal, transportation fuels would have to be 20% less carbon intensive by 2035. The standard would be phased in. As time went on, the policy’s influence on pump prices would increase.

Although California adopted the policy in 2011 and Oregon in 2015, both states are many years away from fully implementing their standards — a 20% reduction in carbon intensity by 2030 for California and a 10% reduction by 2025 for Oregon.

Whatever the percentage, the impact will show up at the pump as higher fuel prices.

By 2030, California’s policy could add as much as 36 cents per gallon at the pump for gasoline and 44 cents to a gallon for diesel, according to a 2018 staff report by the state’s Air Resources Board.

The Oregon Department of Environmental Quality has not made a long-range projection on fuel prices.

California’s Air Resources Board report also estimated that state and local governments will collect $889 million more in sales taxes between 2019 and 2030 as the cost of consumer goods rises because of higher fuel costs.

Eastern Washington tree fruit grower Ben Buchholz told the Senate environment committee that after labor, fuel is the biggest expense for his family’s farm. He said a low-carbon fuel standard would cost his farm several thousand dollars a year.

“It may not seem like much money to some people, but my dad and I each took home less than the state’s minimum wage this year from the farm,” said Buchholz, who’s also executive director of the Northwest Agricultural Cooperative Council.

Buchholz said the low-carbon fuel standard would hit drivers like a regressive gas tax. “It will hurt my family and our employees harder than those taking home larger incomes and commuting shorter distances in urban areas,” he said.

Inslee dismisses claims that pump prices will rise much, if at all. “I don’t buy that bilge from the Republican Party,” he said.