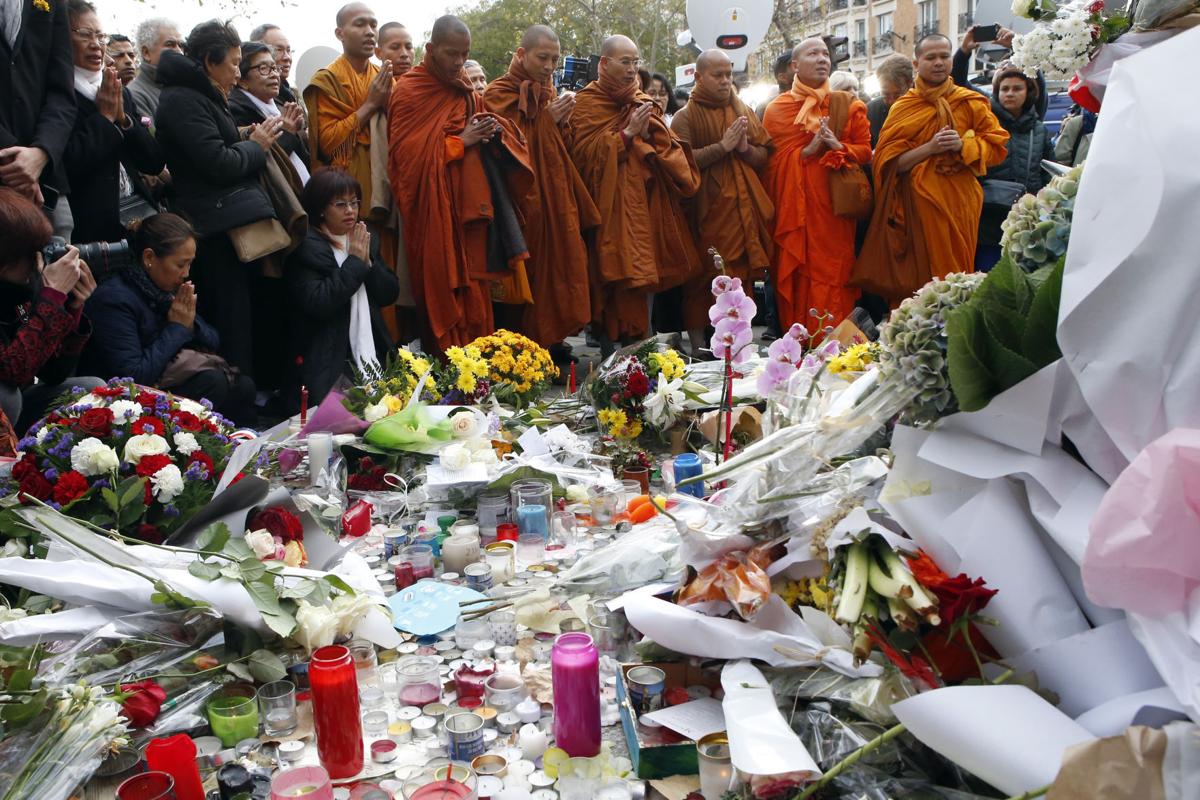 Buddists monks pay respect next to the Bataclan, in Paris, France, Monday. French police raided more than 150 locations overnight as authorities released the names of two more potential suicide bombers involved in the Paris attacks one born in Syria, the other a Frenchman wanted as part of a terrorism investigation. 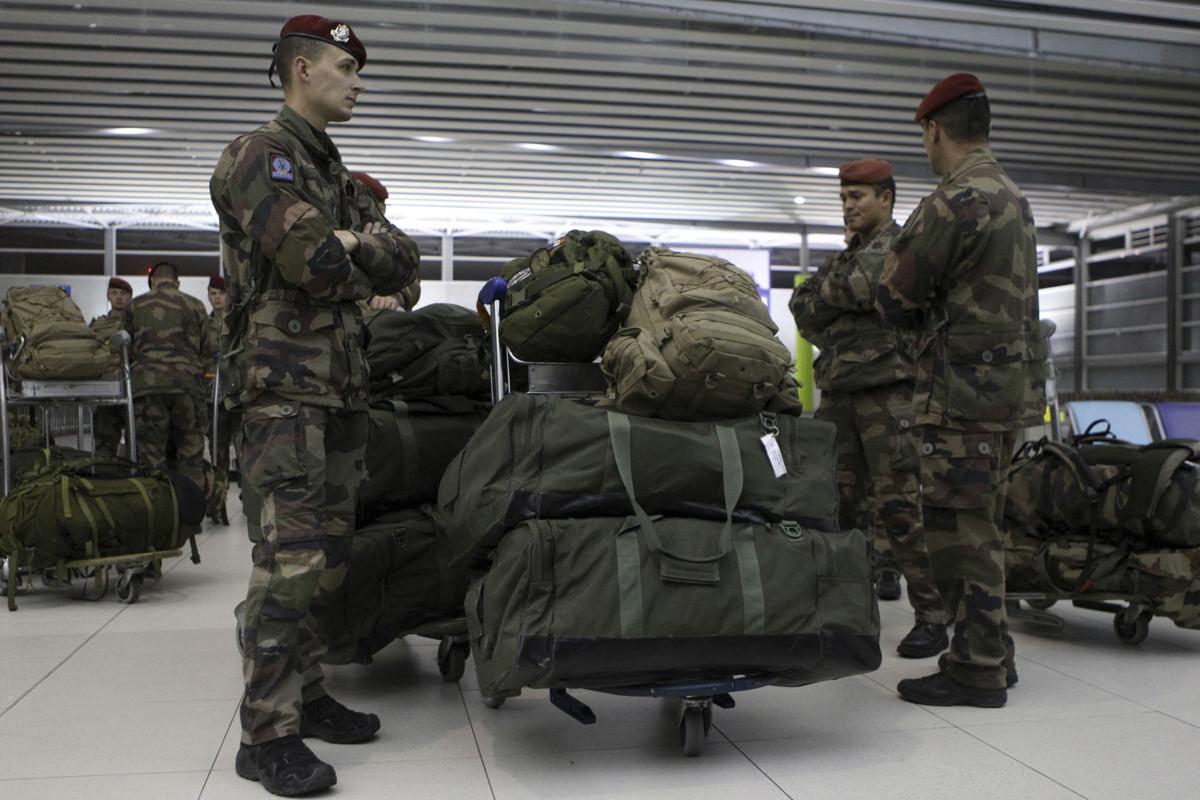 Soldiers wait before picking up their gear at the Charles de Gaulle airport, north of Paris, as part of a security reinforcements, Saturday. French President Francois Hollande said France would wage “merciless” war on the Islamic State group Saturday. 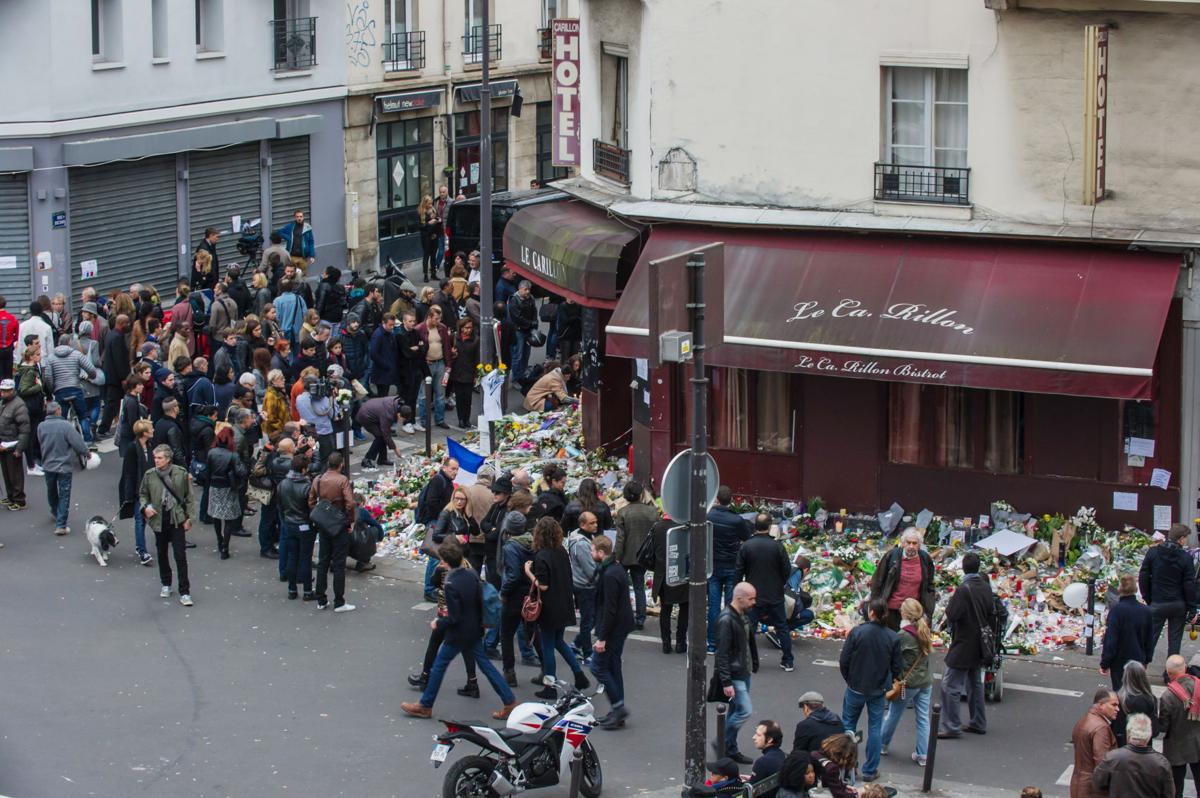 People react stand in front of the restaurant Le Carillon, one of the establishments targeted in Friday's gun and bomb attacks, in Paris, Monday.

Buddists monks pay respect next to the Bataclan, in Paris, France, Monday. French police raided more than 150 locations overnight as authorities released the names of two more potential suicide bombers involved in the Paris attacks one born in Syria, the other a Frenchman wanted as part of a terrorism investigation.

Soldiers wait before picking up their gear at the Charles de Gaulle airport, north of Paris, as part of a security reinforcements, Saturday. French President Francois Hollande said France would wage “merciless” war on the Islamic State group Saturday.

People react stand in front of the restaurant Le Carillon, one of the establishments targeted in Friday's gun and bomb attacks, in Paris, Monday.

PARIS — France fell silent Monday to remember 129 people killed by Islamic State militants as police failed to corner a key escaped accomplice and officials named the alleged Syrian-based mastermind of the attacks, who remained beyond their grasp.

President Francois Hollande led his stunned, jittery nation in one minute’s silence at the University of Sorbonne, while thousands more clasped hands outside some of the bullet-riddled nightspots where extremists struck Friday night during a half-dozen attacks that also wounded 350.

Only hours before, Parisians had fled in panic, trampling through memorial candles and messages to the dead, after hearing apparent gunshots that turned out to be fireworks.

But city authorities vowed amid a state of emergency to resume normal life. Children went to school and the Eiffel Tower reopening to tourists after a two-day shutdown. The tower was being floodlit at night in the red, white and blue of the French tricolor along with a projection of Paris’ motto of “Tossed but not sunk,” suggesting an unsinkable city tossed in the waves.

But as France intensified its air strikes on suspected IS power bases in Syria, police struggled to achieve a breakthrough in their hunt for those linked to France’s deadliest attacks since World War II.

France wants to unite with the U.S. and Russia in a grand coalition dedicated to smashing the Islamic State group, Hollande told lawmakers Monday in a rare joint session in the Palace of Versailles as authorities worldwide struggled to pinpoint those responsible for the deadliest attacks on France since World War II.

“The faces of the dead people, of the wounded, of the families don’t leave my mind,” Hollande declared after France and many allies observed a minute of silence in honor of the 129 killed and 350 wounded when three teams of IS attackers targeted the national stadium, a rock concert and four nightspots Friday with assault gun fire and suicide bombs.

“In my determination to combat terrorism, I want France to remain itself. The barbarians who attack France would like to disfigure it. They will not make it change,” Hollande declared. “They must never be able to spoil France’s soul.”

As darkness fell it was floodlit in the red, white and blue of the French tricolor along with a projection of Paris’ motto of “tossed but not sunk,” suggesting an unsinkable city tossed in the waves.

Hollande said the United States and Russia needed to set aside their policy divisions over Syria and “fight this terrorist army in a single coalition.” He said he hoped to meet soon with U.S. President Barack Obama and Russian leader Vladimir Putin, though he didn’t specify whether they would all meet together.

In neighboring Belgium, police donning balaclavas and assault rifles mounted a tense hours-long standoff outside the suspected hideout of 26-year-old Salah Abdeslam, who has been identified as the alleged driver of a rental car that delivered attackers to the scene of greatest slaughter, a rock concert inside a nightclub in which 89 died.

That car, rented by Abdeslam, was found abandoned on Paris’ east side with several assault rifles and clips of ammunition still inside.

French border police had stopped him Saturday but unwittingly allowed Abdeslam to travel on to Belgium, unaware of an arrest warrant that had been issued in Paris that described him as extremely dangerous.

Police who raided an apartment in the Brussels district of Molenbeek believed to be connected to Abdeslam apparently came up empty Monday after storming the residence, apparently firing tear gas canisters to subdue anyone inside. Police and other Belgian officials said they could not confirm any significant arrests at the scene.

One of Abdeslam’s brothers, Brahim, blew himself up outside a Paris restaurant, also killing one civilian, during Friday night’s attacks involving six suicide bombers. His other brother, Mohammed, was detained by Belgian police but released without charge Monday. His lawyer Nathalie Gallant said that, unlike his two brothers, Mohammed Abdeslam “didn’t make the same life choice” and had not been “tempted into jihadism.”

A French official, who spoke to The Associated Press on condition of anonymity, said police had identified the suspected mastermind as Abdelhamid Abaaoud, a Belgian national believed to operating in Syria. He is featured in a 2014 video apparently taken in Syria boasting of carrying a cargo of killed “infidels” in the back of his vehicle.

The official, who has direct knowledge of the police investigation but is not authorized to speak publicly about the probe, said Abaaoud also is suspected of overseeing two thwarted attacks earlier this year on a Paris church and a Paris-bound train. The latter attack was stopped by American passengers who restrained a gun-toting man before he could open fire.

The Defense Ministry said in a statement that 12 aircraft based in Jordan and the Persian Gulf dropped a total of 20 bombs. It called the operation the largest attack by French air power since France in September joined the U.S.-led coalition in targeting suspected IS power bases in Syria.

Tantalizing clues about the extent of the plot have emerged from Baghdad, where senior Iraqi officials told the AP that France and other countries had been warned Thursday of an imminent attack.

An Iraqi intelligence dispatch warned that Islamic State group leader Abu Bakr al-Baghdadi had ordered his followers to launch gun and bomb attacks immediately and take hostages inside those countries involved in bombing IS positions in Iraq and Syria. The Iraqi dispatch, obtained by the AP, provided no details on when or where the attack would take place.

However, Iraqi intelligence officials told the AP that they provided specifics to France, including that attackers had been trained specifically for Friday’s attack and deployed from Raqqa.

The officials also said a sleeper cell in France met the attackers before their attack and helped them to plan it. They said 24 people were involved: 19 attackers and five who provided logistics and planning.

None of those Iraqi details have been corroborated by officials from France or other Western intelligence agencies. All spoke on condition of anonymity, citing the ongoing investigation.

Harrowing accounts of survival continued to emerge, particularly from the Bataclan theater, where three attackers shot into the fleeing crowd. Two then detonated suicide vests as police stormed the building, fatally shooting the third attacker.

Julien Pearce, a journalist at Europe 1 radio who escaped by crawling onto the Bataclan stage, said he got a good look at one attacker who appeared “very young.”

Paris remains on edge amid three days of official mourning. French troops have deployed by the thousands in support of police to restore a sense of security in one of the most visited cities on Earth. But any sound of loud bangs can sent people scurrying for cover.

“Whoever starts running starts everyone else running,” said a city councilwoman, Alice Carton, who was at the square. “It’s a very weird atmosphere. The sirens and screaming are a source of fear.”